This year's Crimson will need to fill vacancies left by last year's stellar senior class, but the team is up for the challenge. Harvard knows that its usual studs will have to step up, but young players assuming new roles will also have to capitalize. By Timothy R. O'Meara
By Spencer R. Morris, Crimson Staff Writer

The Harvard men’s hockey team, like every other Division I club, wants to improve upon last year’s results. When it comes to playing in its home rink, however, the Crimson has little room for error.

The Crimson did just that, nabbing a 5-0 victory in the inaugural matchup of its new campaign. Hosting the Big Green marked the start of a three-game conference homestand that the Harvard icemen will use to prepare for a hefty road trip in November.

“We can play two scrimmages, but [the regular season] is different,” Harvard coach Ted Donato ’91 said. “[The Big Green] made some clever plays…early on, but then our depth started to show up a little bit and we were able to put some shifts together.”

While improving upon such a pristine home record is near impossible, the Crimson certainly wanted its first matchup with Dartmouth to go better than it did last season, with the team falling to the Big Green, 8-4. That blip is still Harvard’s most recent conference loss, as the squad remained loss-less for 18 games until its Frozen Four defeat in Chicago.

“Dartmouth has given us some trouble over the last couple of years,” coach Donato said. “So [it’s a] good win.”

During the opening minutes of the contest, it wasn’t clear whether the Crimson would cruise to victory as easily as it did. Dartmouth was ready to play from the opening faceoff—with a game already under its belt, the Big Green’s legs were churning and bodies were colliding.

The ice finally tilted in Harvard’s favor when, nine minutes in, freshman forward Henry Bowlby tallied his first career goal and his team’s first of the year.

Fellow rookie Jack Badini moved the puck to senior blue-liner Wiley Sherman, who fired a point shot on goal. Bowlby was there to redirect the puck, which found its way to the back of the net. 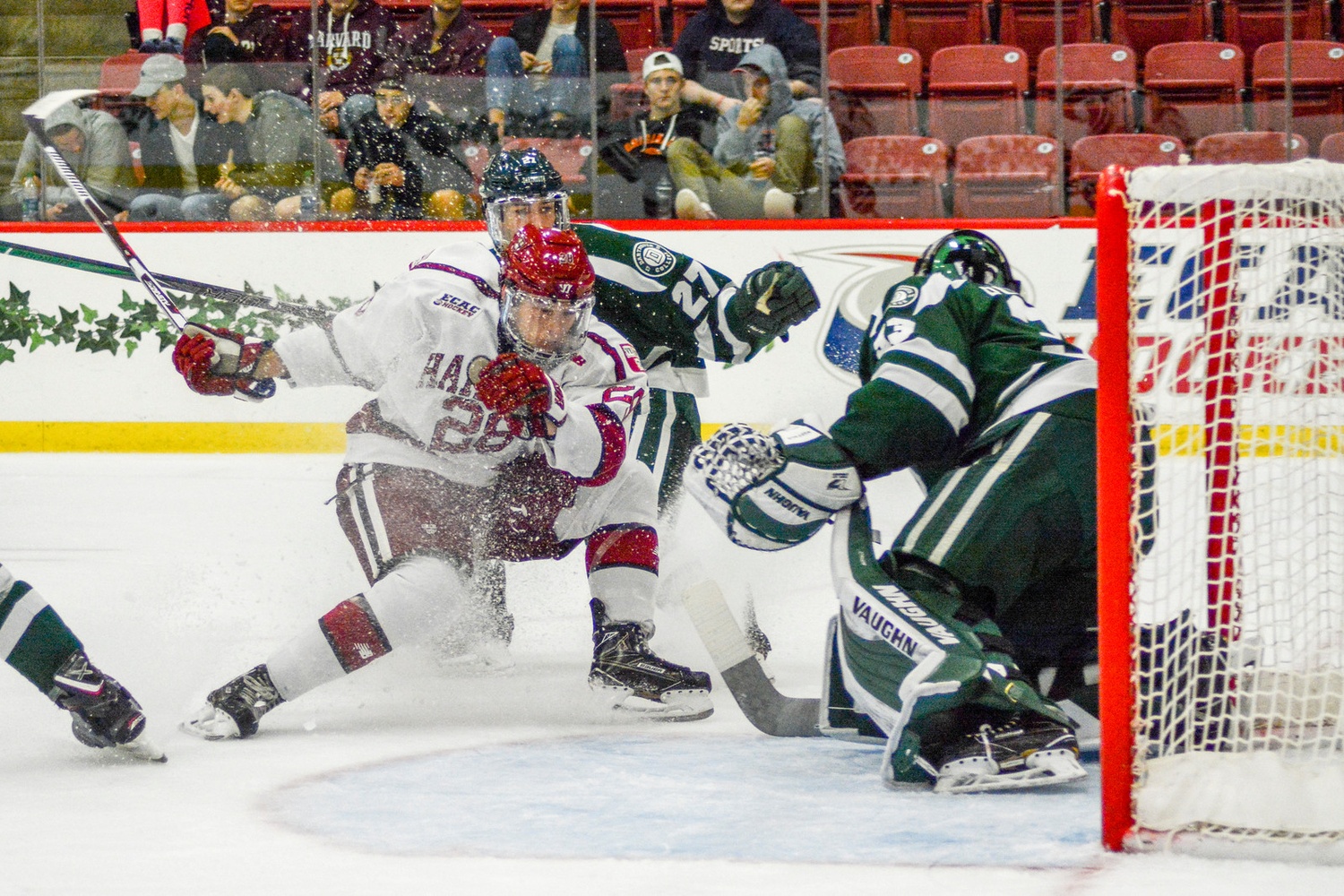 Coach Donato emphasized getting to the net in his team's first game of the season. For freshman Henry Bowlby, taking this advice to heart paid off. Bowlby registered his first career goal through hard work at the net front tonight. By Maxime A. Harrington

“Wiley doesn’t hesitate, he gets the shot off hard, and you get Bowlby right there in front and he just tips it,” tri-captain goaltender Merrick Madsen said. “From then on out I think it just set the tone and we were able to play with a little more ease.”

Once Bowlby found twine, the Crimson settled in and found its game. Before long, Harvard established the style of play fans grew accustomed to seeing last season. With the forwards skating aggressively, the home team hit pay dirt twice more in the opening frame of its season.

“I thought it was probably a little bit slower of a start than we would’ve liked,” Donato said. “After the first five or seven minutes, we started to get in on the forecheck and use our speed and keep some pucks alive…. After that we played a little bit better.”

Also in the first period, junior forwards and linemates Ryan Donato and Lewis Zerter-Gossage each struck against Big Green goaltender Devin Buffalo, who would later be pulled after ceding another snipe to Donato in the second frame.

Donato’s first goal of the night came shorthanded just before the first period horn. The Boston Bruins draft choice strode into the zone down the right side before picking a corner and besting Buffalo. Donato finished last season with a team-leading three tallies on the penalty kill, and it looks like he will continue to terrorize teams while man-down this year.

The junior, who has moved into the center spot from the wing last season, finished the game with two strikes. Donato played the role of special teams expert on Sunday, notching his second goal just eight seconds into the man-advantage in the middle period.

Faced with lingering questions about forward depth entering the season, the Crimson answered the critics in convincing fashion on Sunday. The usual suspects did their part—Donato, sophomore defenseman Adam Fox, Madsen, and others—while the freshmen made the most of their opportunities. Aside from Bowlby, rookie defenseman Reilly Walsh and forward Jack Badini each tallied an assist. 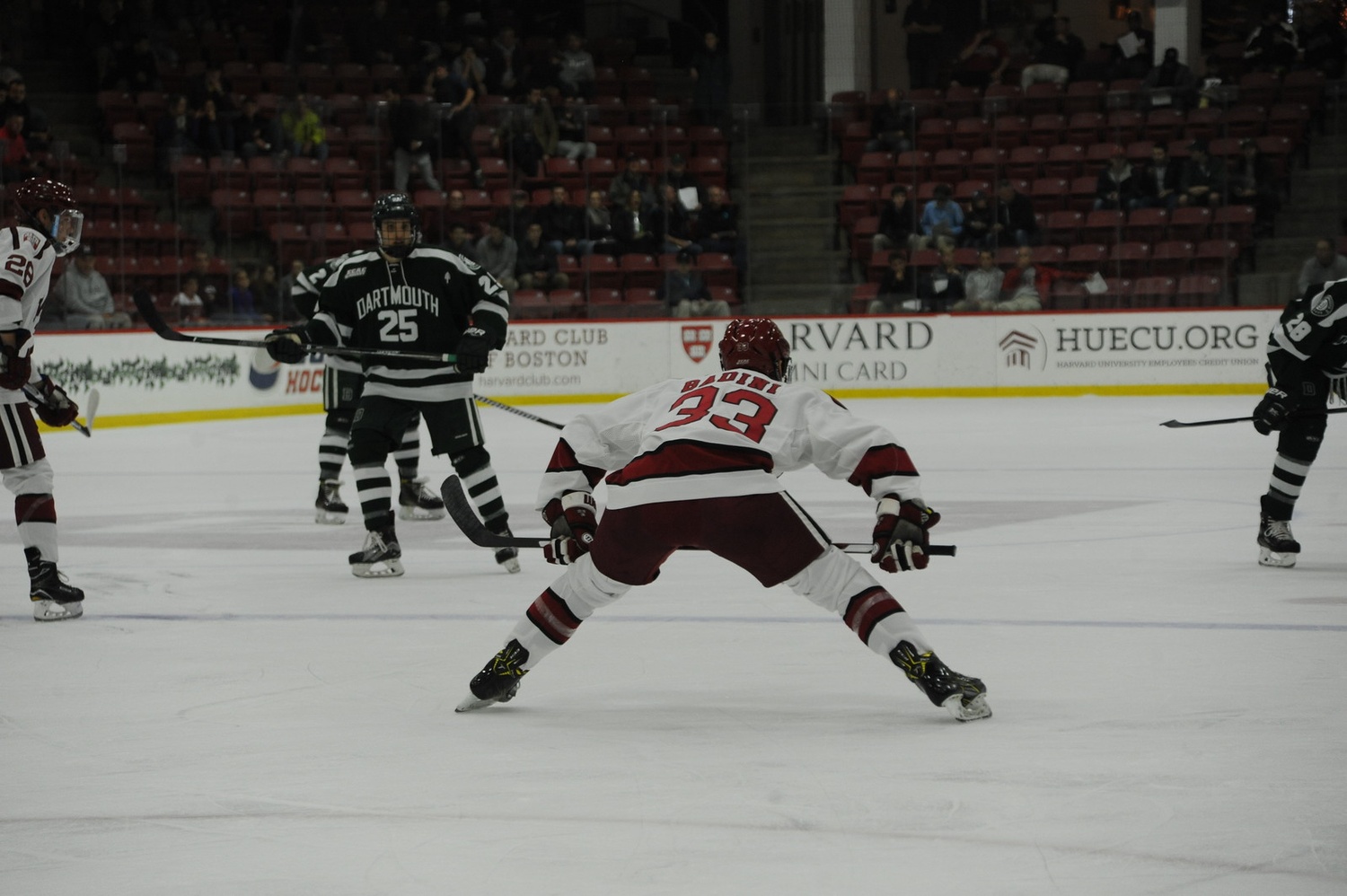 Walsh rounds out a daunting first power play unit for the Crimson. With offensive facilitators in Fox and Walsh manning both points—not to mention Donato’s looming presence at the right circle—opposing penalty kill units will not know where to start.

“Obviously we have a guy like [Fox]—he’s going to dominate any player on the power play,” Ryan Donato said. “[Walsh] is a great player, too. We have a lot of guys with talent.”

Sunday night, the Big Green predictably struggled with Harvard’s man-up unit, forfeiting the goal to Donato—assisted by Walsh and Fox—before yanking its net-minder in an act of capitulation.

While the Crimson’s season opener went poorly for Dartmouth’s starter, Madsen had a relatively quiet night in goal en route to a shutout. The chances that Madsen faced were not great in number, but they demanded quality saves to preserve the clean sheet.

The Arizona Coyotes prospect seemed to pick up where he left off last season, after finishing atop the NCAA in wins and top-20 in both goals against average and save percentage. During his team’s road to the Frozen Four, Madsen’s win streak of 16 games was the longest in program history. 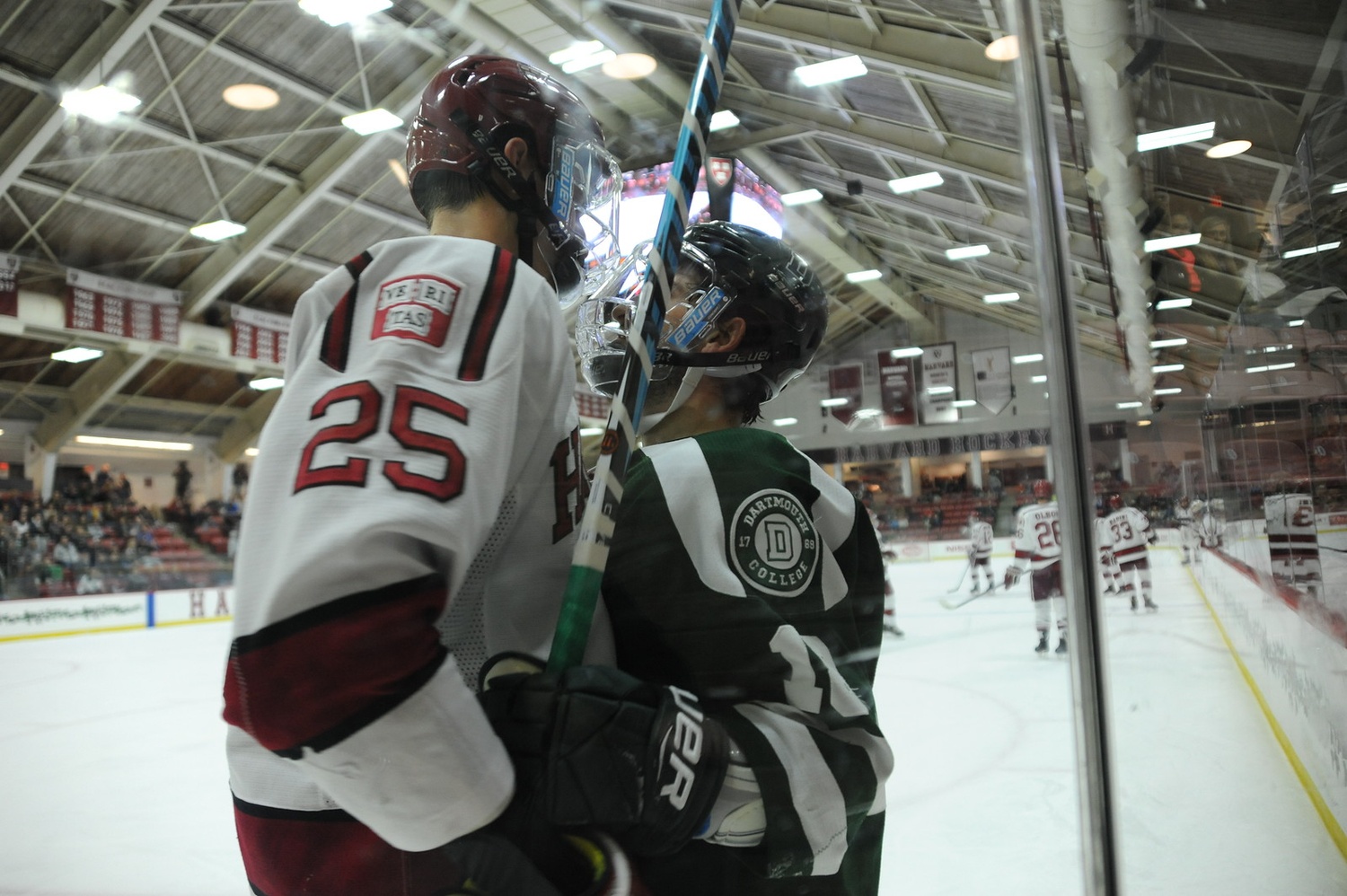 Senior defenseman Wiley Sherman gets into some post-whistle roughhousing with Dartmouth forward Corey Kalk. Sherman's physical presence will stabilize the blue line this year for the Crimson. By Matthew W DeShaw

Ultimately, Madsen’s individual metrics will be reflections of the team’s play. And while Harvard picked up its first win of the season in a decisive manner on Sunday, the Crimson will need to continue polishing the details of its game in order to be ready for stiff competition throughout November and December.

“It was a pretty good team effort,” coach Donato said. “It wasn’t anything spectacular, it wasn’t a great game as far as the level of pace or skill…. We’ll have to improve against two good teams against next weekend.”