The committee searching for Harvard’s next president is narrowing its hundreds-strong candidate pool and has started compiling a select list of potential presidents, according to two individuals with knowledge of the search.

The 15-member committee has received more than 600 total recommendations for candidates to date, according to an email sent over the Harvard Latino Alumni Alliance list summarizing a meeting between Latino alumni leaders and Harvard Corporation member Lawrence S. Bacow. While the committee is still accepting nominations, the two sources said the group is now honing in on a smaller list, though they could not confirm its exact length.

Although the search committee has repeatedly declined to comment on the search’s progress, several prominent donors and professors at Harvard say there are four likely contenders from within the University: Harvard Business School Dean Nitin Nohria, Government professor Danielle S. Allen, Dean of the Faculty of Arts and Sciences Michael D. Smith, and University Provost Alan M. Garber ’76.

William F. Lee ’72, the senior fellow of the Corporation declined to comment on the number or identity of candidates the committee is considering.

Michael T. Kerr ’81, one of the co-chairs of the Harvard College Fund Executive Committee who said he knows many search committee members “very well,” named the four as candidates the committee will likely consider closely.

“From what I can tell those are the names that everybody thinks are on the shortlist of the internal people, and we’ll see what list comes beyond that,” Kerr said, referring to Nohria, Allen, Smith, and Garber.

More than a dozen alumni and professors mentioned Nohria as a potential frontrunner. Nohria became the dean of the Business School in 2010; since then, he has helped raise more than $1 billion for the Business School’s capital campaign and has overseen a drive to increase gender equity at the school. 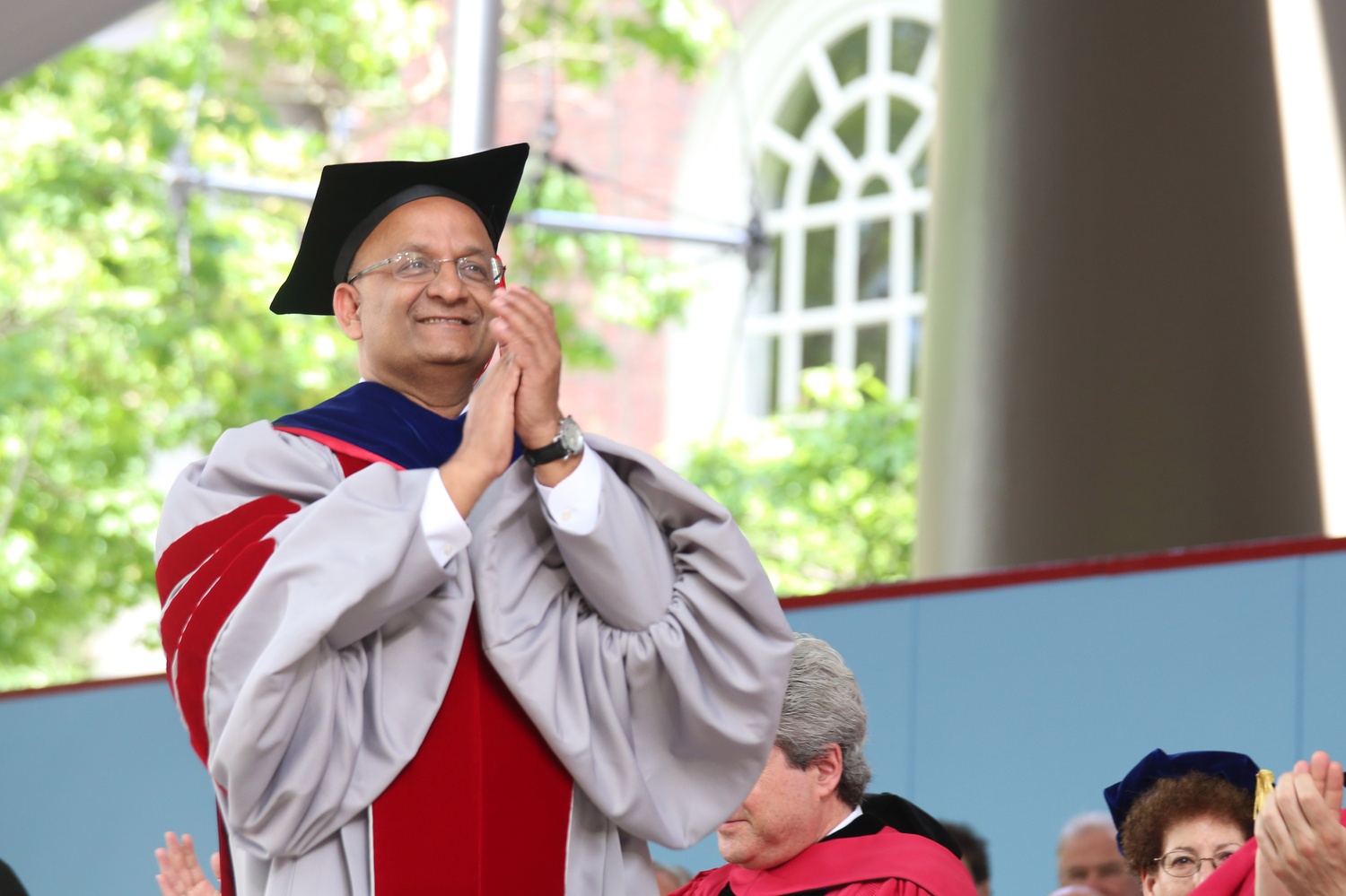 Nohria declined to comment on whether he is interested in serving as successor to University President Drew G. Faust, who announced over the summer that she plans to step down in June 2018.

When asked whether Harvard’s next president should have a background in engineering, Dean of the School of Engineering and Applied Sciences Francis J. Doyle III said no—but, unprompted, pointed out that Nohria has an undergraduate degree in chemical engineering.

Dean of the College Rakesh Khurana, who said he is very close to Nohria personally, declined to comment on whether he thinks Nohria would be well-suited for the presidency in an interview last week. He also declined to say whether Nohria has ever expressed interest in the position.

“That question is best addressed toward Dean Nohria,” Khurana said.

Allen, who heads the Edmond J. Safra Center for Ethics, became a University Professor—the highest honor bestowed upon a Harvard faculty member—less than two years after arriving at Harvard. In recent months, she has assumed increased responsibility on campus, serving as co-chair of a high-profile University task force focused on diversity and wading into the ongoing debate on undergraduate social life.

“I think there’s no question she would be a strong candidate,” Kerr said of Allen.

When asked about the presidency, Allen laughed. “I’ve got the perfect job,” she said. “That’s my comment.”

Donors said Smith and Garber, both high-level Harvard administrators, are strong contenders for the position and are widely respected by Harvard affiliates. Faust appointed Smith, a computer scientist, to the position early in her tenure. He has overseen major projects like the renewal of Harvard’s undergraduate Houses and the expansion of the School of Engineering and Applied Sciences.

In an interview last month, Smith said he did not know if the search committee is considering him for the job. 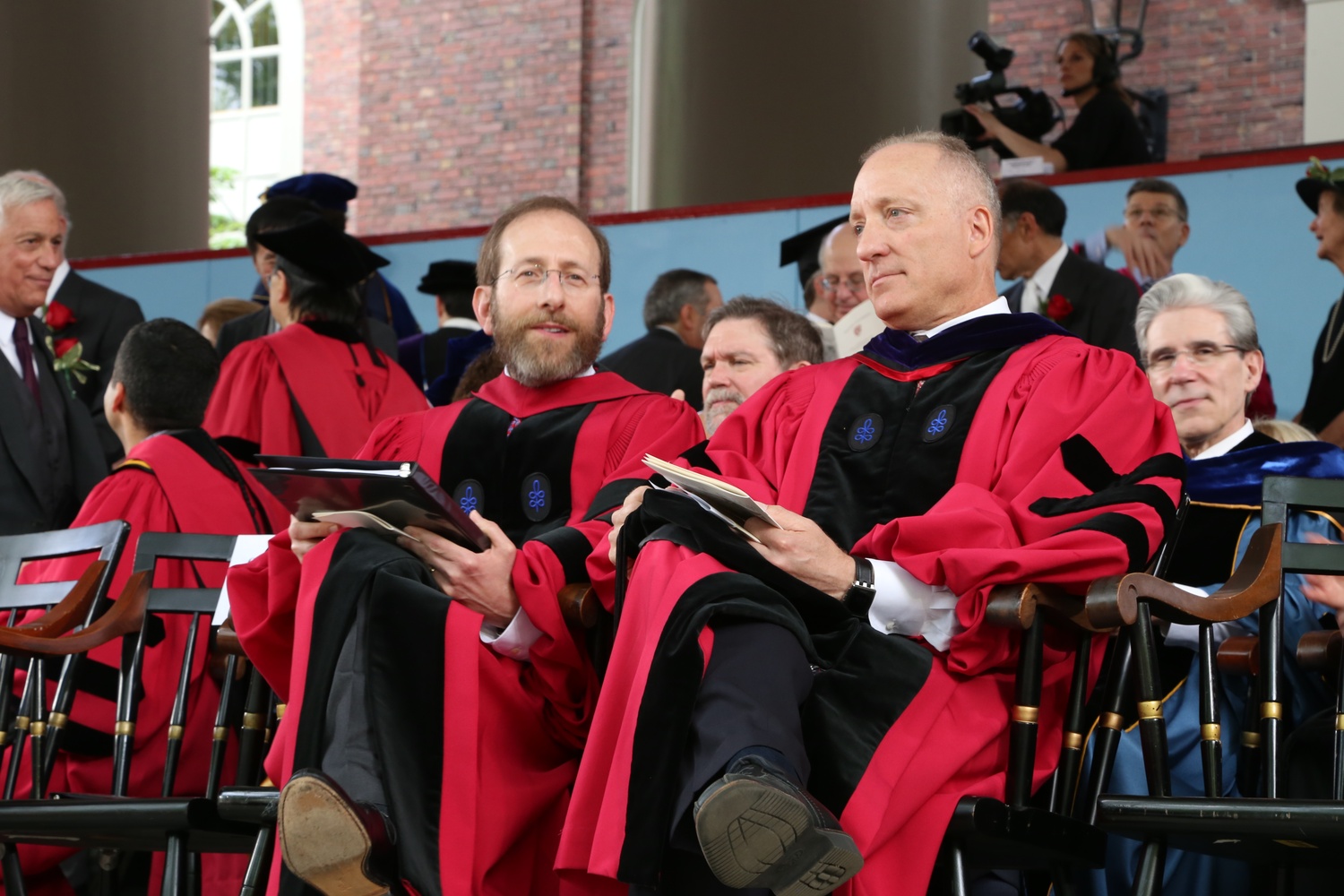 Garber, who taught medicine and economics for two and a half decades at Stanford before returning to Harvard, has served as University Provost since 2011. He did not respond to a request for comment.

As the committee begins to whittle down its list of candidates, members are traveling to cities across the country to meet with local alumni associations. During the 2000 search, the search committee publicly announced at a news conference that they had developed a list of 400 candidates. This time around, though, the committee has proven more tight-lipped.

“We have no indication that there will be any such public announcement this time around,” University spokesperson Melodie L. Jackson wrote in an email.

A member of the committee met with leaders of the capital campaign, Harvard’s record-setting fundraising effort, on Oct. 17 in New York City to discuss the search, according to Kerr.

“They’re doing those meetings with alumni in small groups—particularly with the alumni which are highly active,” Kerr said.

Kerr said the search committee member leading the meeting did not name individual candidates under consideration. He said the purpose of the meeting was to define which issues alumni and searchers should focus on.

Presidential search experts and Harvard affiliates have said Harvard’s next president will need to tackle several different challenges as he or she assumes office—including reshaping social life at the College, lobbying the federal government, growing Harvard’s engineering profile, and managing the University’s embattled finances.