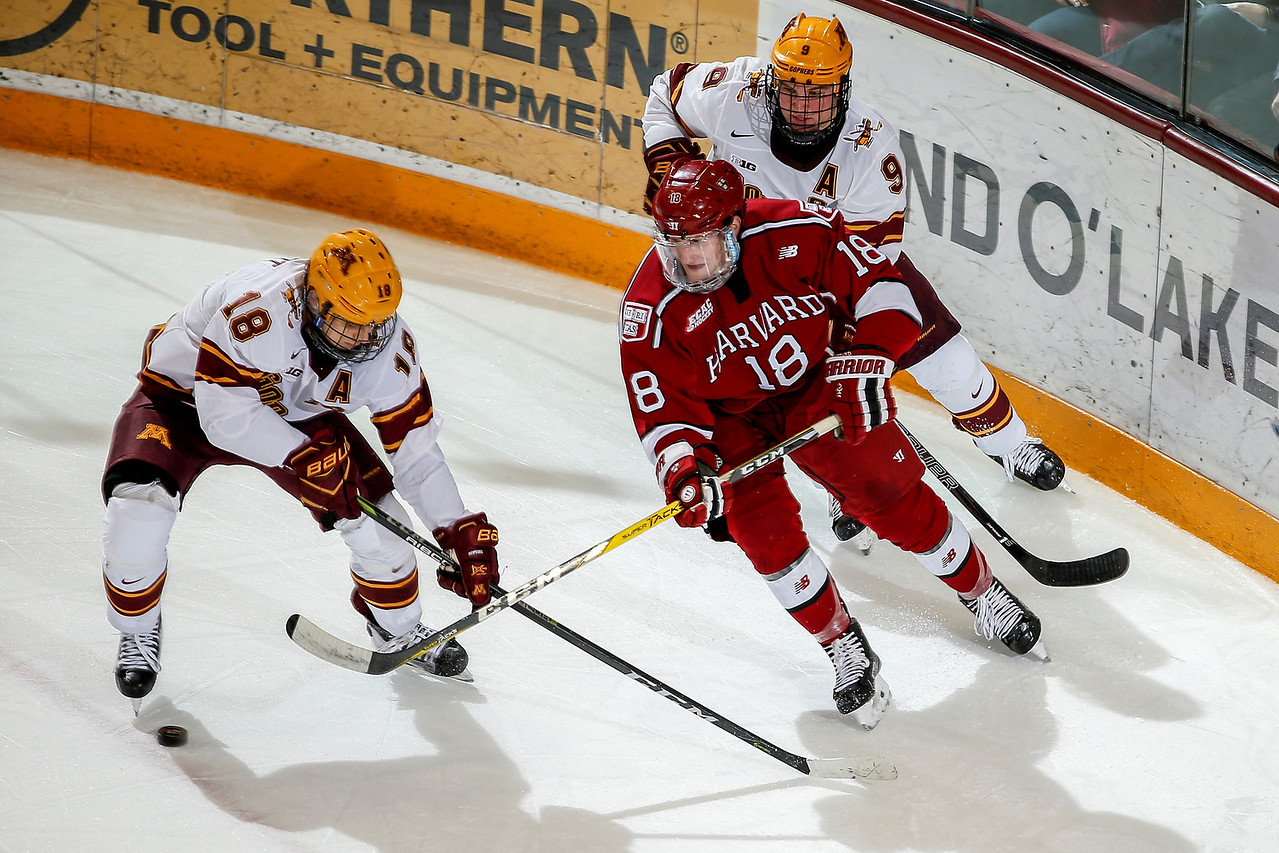 On Saturday, key offensive pieces like blue-liner Adam Fox (pictured here) tried all game to get the Crimson offense going, but to no avail, as the team logged just 16 shots in the overtime loss. Harvard's lack of shot attempts comes as somewhat of a surprise considering the wider Olympic-sized rink at Mariucci Arena. By Courtesy of Jim Rosvold/USCHO
By Spencer R. Morris, Crimson Staff Writer

This weekend, all eyes turned to New Haven, Conn., as Harvard football clashed with Yale in “The Game”. While classmates were enjoying the annual festivities, however, the No. 13/11 Harvard men’s hockey team was up north battling No. 7/6 Minnesota in back-to-back contests.

“Good to see family and friends again and play…in front of a familiar atmosphere that I grew up going to games at, so it was fun,” Bowlby said. “I know a lot of the guys on the other team, grew up with a few of them…so it was tough shaking their hands after the loss.”

The pair of defeats marks the second straight weekend for which Harvard has no points to show, despite solid performances from the team’s top forward trio—Bowlby and junior forwards Ryan Donato and Lewis Zerter-Gossage—and a stellar game on Saturday from tri-captain goaltender Merrick Madsen.

The last time the Crimson dropped its fourth straight bout was February 7th, 2015, in a season that still saw the squad reach the NCAA Tournament.

Until the final seconds of the game, Harvard channeled the old adage, “bend, not break”.

“You got to be able to play in front of hostile fans,” coach Ted Donato ’91 said. “And you need to be able to bend and not break. We did it for a lot of the night, but [that’s] not good enough.”

Facing an onslaught of shots from Minnesota, Madsen stood tall in net and kept his team in the game. The Arizona Coyotes prospect faced 16 shots in each of the three regulation periods and set a career-high in saves with 48. Only sophomore forward Rem Pitlick was able to solve Madsen in regulation.

“Our goaltender was outstanding,” coach Donato lauded. “It’s frustrating losing a game when he plays that well…. We have a lot of faith in him, and unfortunately on the last goal, we don’t give him a chance to make a save.”

Junior forward Brent Gates Jr. curled at the goal line and found Sheehy on a cross-crease pass. Madsen couldn’t get over to the far-side pipe quick enough, and the Mariucci crowd was erupting moments later.

After conceding four straight goals to start Friday’s game, the Crimson hoped to open on a more positive note the next night. Though, while Harvard had some quality chances early on, Minnesota mainly contained the Crimson attack and racked up a sizable lead in shots on goal. Through one period, this disparity was nine; through 40 minutes, it grew to 19. 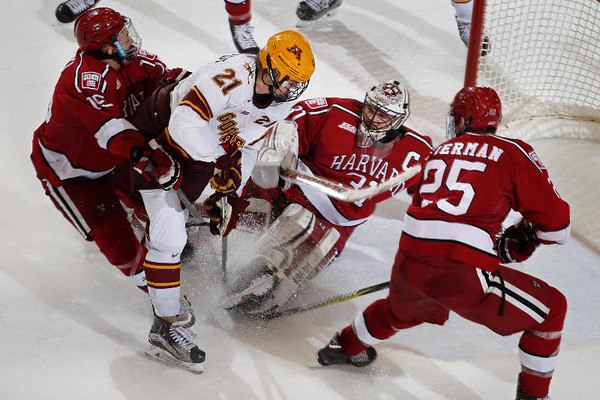 Harvard net-minder Merrick Madsen was put to the test all weekend and set a new career-high in saves with 48 on Saturday, despite his team's pair of losses on the weekend. By Courtesy of Jim Rosvold/USCHO

In terms of sheer quantity of chances, Saturday’s overtime bout was a tale of two teams. On one hand, Harvard was held to its lowest shot total since it tallied just 11 in a shutout loss to RPI on February 1st, 2013. On the other, the Gophers finished with their highest shot total since January 17th, 2015, in a win over Wisconsin.

“Regardless of the shot totals, I thought we had a lot of dangerous chances as well,” said coach Donato in support of his team’s effort. “I like the way our team battled, and it’s a good team on the other side…. They just kept coming.”

Of the few positives coach Donato can extract from the game, freshman forward Henry Bowlby’s play of late is certainly one of them. The Edina, Minn., native potted the Crimson’s only goal on Saturday in front of a hometown crowd and looks to be clicking nicely on the team’s revamped top line.

“It’s no secret that every kid in Minnesota has a twinkle in [his] eye for the U [of Minnesota],” coach Donato said. “For a guy like [Bowlby] to be able to come in and play well and score a goal each night, I think is pretty special.”

After falling to 2-3 last weekend, Harvard’s immediate goal was to return to .500. Nevertheless, the team failed to do so after a zealous third-period surge became a case of too little, too late.

Unlike the second game of the series, Friday’s clash saw a more even distribution of shots. Nevertheless, the Gophers jumped out to a statement 4-0 lead after two periods.

“All night long we were just a little bit tentative,” coach Donato said. “We didn’t play with a lot of conviction. I thought in the third [it was] a little bit better...but if you play a good team, you can’t spot them a number of goals.”

Gates and Pitlickboth inked the score sheet in the first frame before senior defenseman Steve Johnson and freshman forward Casey Mittelstadt piled it on in the middle period.

The shifty Mittelstadt, who ranks as the second highest NHL Draft pick in this year’s NCAA player pool, finished the weekend with three points and took full advantage of the wider, Olympic-style ice sheet at 3M Arena at Mariucci. 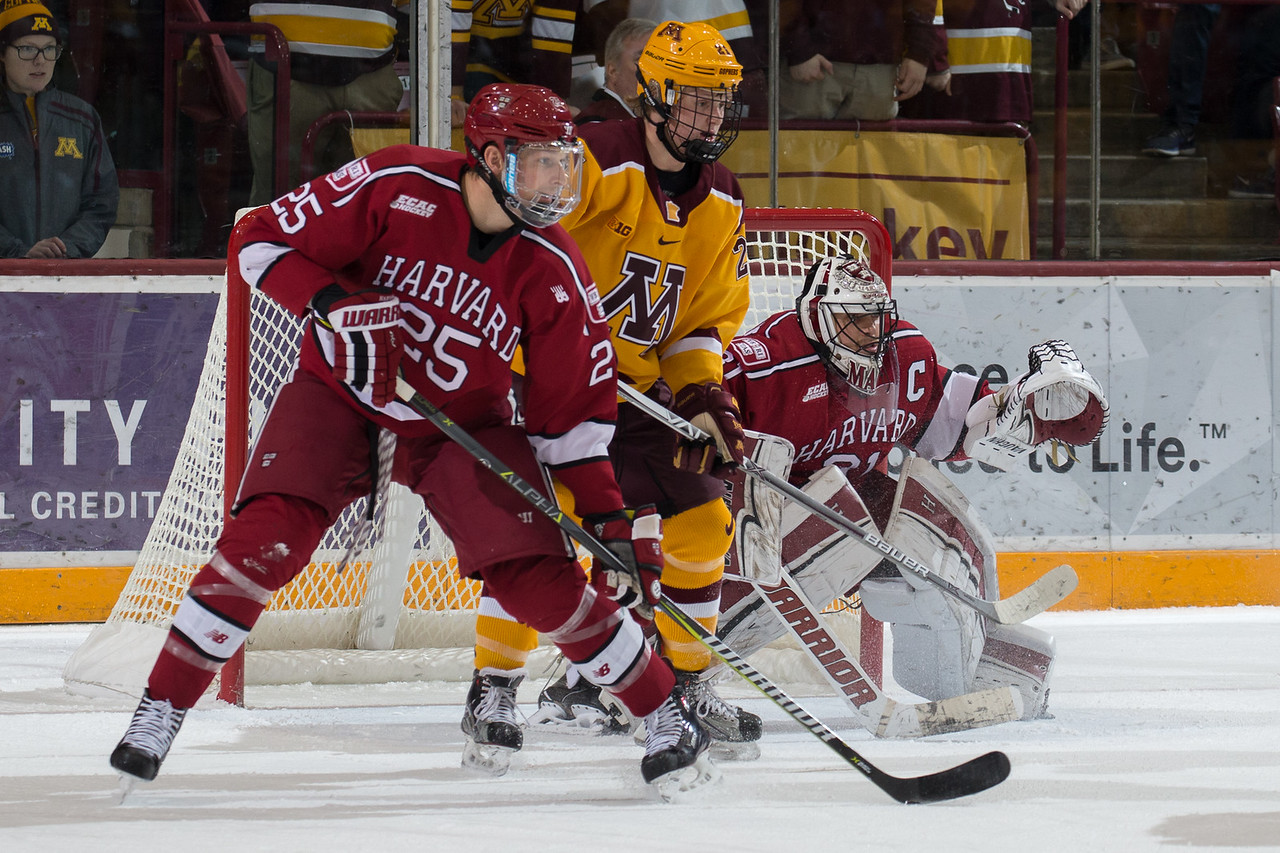 Minnesota freshman phenom Casey Mittelstadt was part of the reason Merrick Madsen had such a busy weekend between the pipes. By Courtesy of Jim Rosvold/USCHO

“I think it’s an adjustment for any team when they come up to the big ice surface,” coach Donato admitted. “Certainly, they have some guys who get around the ice well…. But that’s not something that’s surprising to us.”

Unhappy with the result of the first 40 minutes, the Crimson came out for the final frame with a determined energy. Harvard carried play in the third, the only period all weekend in which the Crimson outshot Minnesota.

Less than a minute into the frame, freshman forward Jack Badini tallied his first career goal and jumpstarted the offense for his team.

Fellow freshman Reilly Walsh skated into the zone before turning his back to the defense at the right circle. He found a trailing Badini in the high slot for a one-time snipe that beat Gophers goaltender Eric Schierhorn five-hole.

Donato added Harvard’s other goal and, after tallying a helper on Saturday, has picked up a point in every game so far this season.

That was all the Crimson’s late-game push could muster, however. The contest ended at 4-2, as Harvard paid the price for another lackluster start.