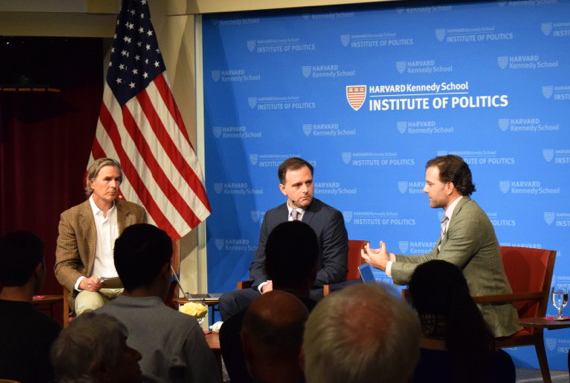 Brothers Daniel and Jordan Allott, who are currently working on a documentary to understand how President Donald Trump won the 2016 election, encouraged students to engage with citizens from across the political spectrum in a discussion at the Institute of Politics Wednesday evening.

Jordan Allott, a filmmaker, and Daniel Allott, an editor for the Washington Examiner, are currently working on “The Race to 2020,” a project they said will seek to track the popularity of Trump’s presidency.

Between 2017 and 2020, the Allott brothers said they will spend months interviewing and seeking to understand the political climate in nine counties across rural America that they deemed crucial to the 2020 presidential election.

“It’s our attempt to better understand the people and places that put Donald Trump in the White House,” Daniel Allott said. “For us personally, I think after the election, it was pretty clear many people in the media got the election wrong.”

“They didn’t anticipate the rise of Donald Trump or his election victory,” he added.

The brothers said they hope to capture on camera how Trump’s presidential campaign and administration have resonated with voters.

“We wanted to give a voice to people in parts of the country that often feel like they’ve been ignored,” Jordan said.

After almost a year on the project, the Allotts said their experiences have led them to conclude that voters find familiarity in Trump’s honest tone and genuine approach.

They showed previews of their documentary, including a clip of Mark, a lifelong Democrat who had voted for Trump.

“I think there are tens of thousands of people like Mark all over the country,” Daniel Allott said. “This project is about finding them, talking to them, and trying to understand where they’re coming from.”

Jordan Allott added that they found an image of Trump that was more than just the “hatred and fear and doom and gloom” portrayed by the media. When the Allotts had asked voters to sum up the reason for Trump’s victory in one word, he said, the most common answers were “hope” and “change.”

“For a lot of voters, including some Obama voters, [Trump] was a candidate of hope,” Jordan said.