Men's Hockey Falls to Yale for First Loss of Season 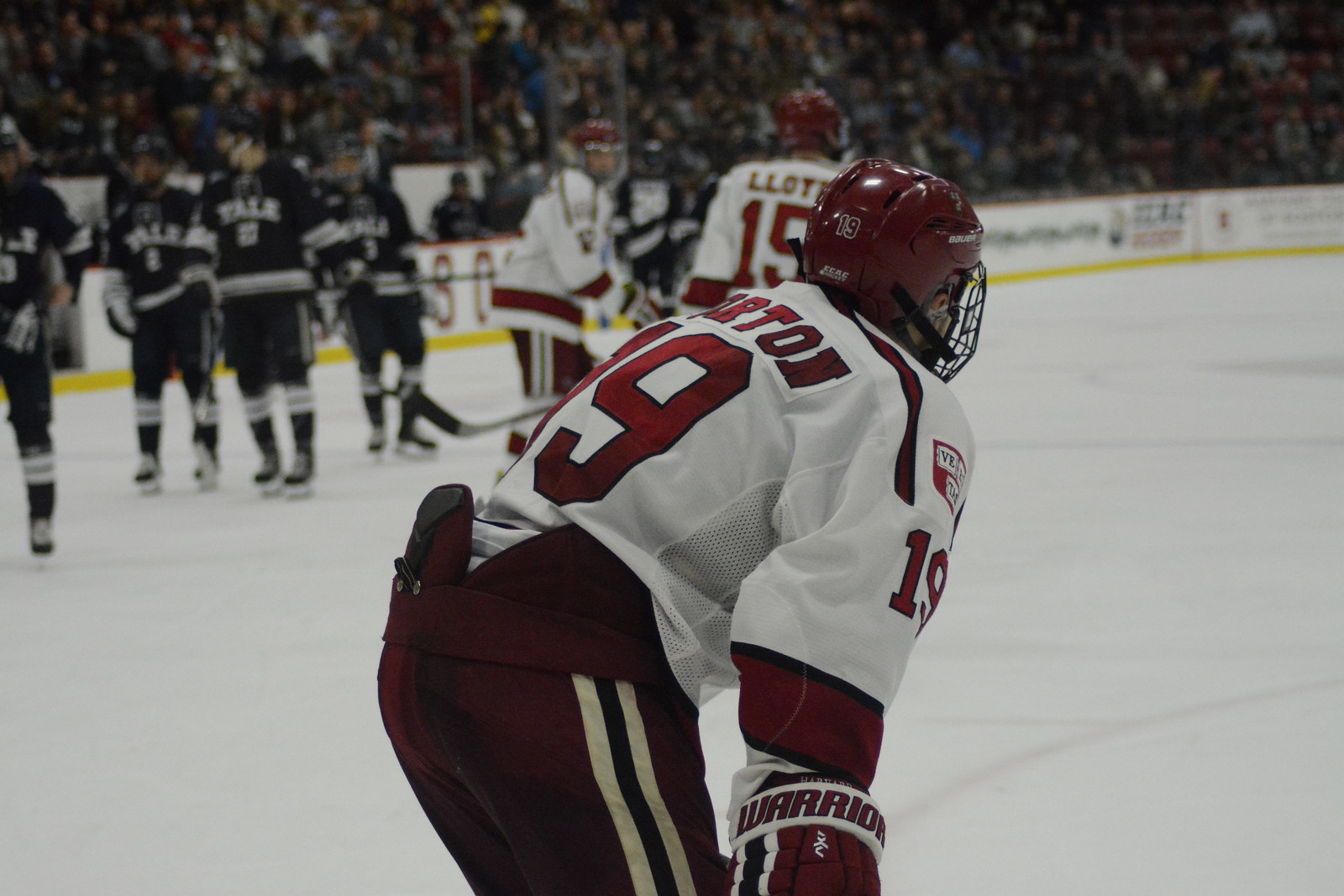 On Friday night, the Harvard men’s hockey team once again did something it rarely does. Except this time, it wasn’t a good thing. After going unbeaten in Cambridge last season, the Crimson finally lost a home match.

The Crimson ultimately fell to the Bulldogs, 5-2, registering its first defeat of the young 2017-2018 campaign. The effort to come from behind would have been an impressive—and rare—feat. The last time Harvard came back from a two-goal deficit was February 11th, 2013 against Boston University in the Beanpot consolation match.

From the time the Bulldogs (2-1-0, 2-1-0) potted their second goal, courtesy of sophomore forward Robbie DeMontis, the Crimson was fighting an uphill battle—an unfamiliar feeling for coach Donato and company.

“Yale made us play more defense than we’ve played this year,” coach Donato said. “We have to be more comfortable playing defense in our own zone…without taking penalties.”

As the bench boss alluded to, a slew of infractions toward the end of the game stunted Harvard’s attempt to claw back from a two-goal deficit, which the Crimson found itself in due to defensive-zone turnovers. Tri-captain Jake Horton ended his night with a game misconduct for boarding a defenseless Yale player.

Trailing 2-0 at the start of the second frame, Harvard quickly tilted the ice back in its favor and, before long, equalized the contest. To get things going offensively, the Crimson looked no further than forward centerpiece, junior Ryan Donato. 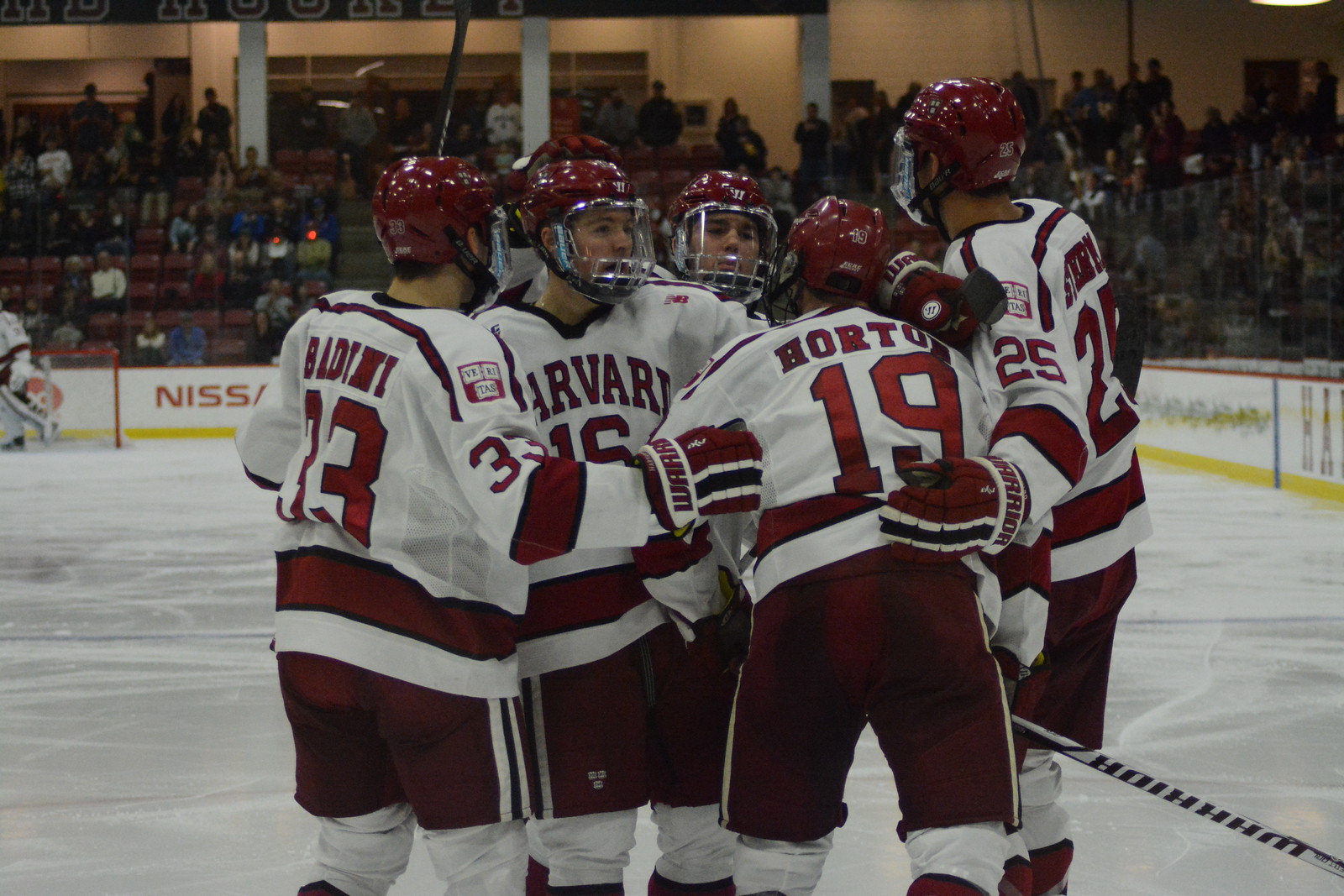 The team gathers after scoring its first goal on Saturday night. Unfortunately for Harvard, the second-period rally was not enough to notch the game. By Amanda M. DiMartini
Advertisement

Possessing the puck at the red line, Donato skated into the zone before fending off a backchecking defender. With his hands free, the Boston Bruins prospect took the puck down low before flipping a slick two-foot saucer pass to a crashing Jake Horton. The tri-captain buried the biscuit.

Just three minutes later on the power play, Harvard evened the game in a strikingly similar way. This time, sophomore blue-liner Adam Fox, sly as always, skated down the left wall. When he got to the goal line, last year’s Ivy League Rookie of the Year cut inward and fed junior Lewis Zerter-Gossage, who sniped the top-left corner on Yale goaltender Sam Tucker.

After the equalizer, fans were roaring inside Bright-Landry Hockey Center. These roars, however, soon turned to whispers.

“I thought [in] the second period, we actually played pretty well,” coach Donato said. “I think we beat ourselves to a certain extent…. We didn’t make the plays at the key points in the game to give ourselves a chance.”

Two minutes after the Zerter-Gossage tally, the Bulldogs answered. Trying to hold the puck at the blue line, freshman defenseman Benjamin Foley lost his footing, allowing a two-on-one to head the other way.

“Too many times we put the game’s fate in a bad spot,” coach Donato said. “We got it back to 2-2, we had some chances, it looked like we were ready to really get on top of them a little bit, but we…made multiple mistakes.”

DeMontis flew toward Crimson tri-captain Merrick Madsen in net. About to be caught by a diving Harvard player, DeMontis shifted the puck across the blue line to fellow sophomore Luke Stevens, who untangled himself from a backchecking Reilly Walsh and slipped the puck past Madsen.

“The longer you play hockey, the more you realize that stuff happens,” said coach Donato, in reference to Foley’s slip. “It’s a bad bounce, he catches an edge…. Instead of trying to put somebody under the spotlight, it’s a great chance to rally around a teammate and say, ‘Hey, we got a bad bounce, but that’s not going to beat us tonight.’”

By this point, Crimson players were engaging in the post-whistle shoving and chirping fans are accustomed to seeing between these two storied rivals. Prior to the contest, Harvard hoped to stick to its game and not get too involved after the whistle.

“At the end of the day, we’re focused on playing in between the whistles, and not trying to worry about…scrums or little fisticuffs with [Yale],” said tri-captain Eddie Ellis on Wednesday. 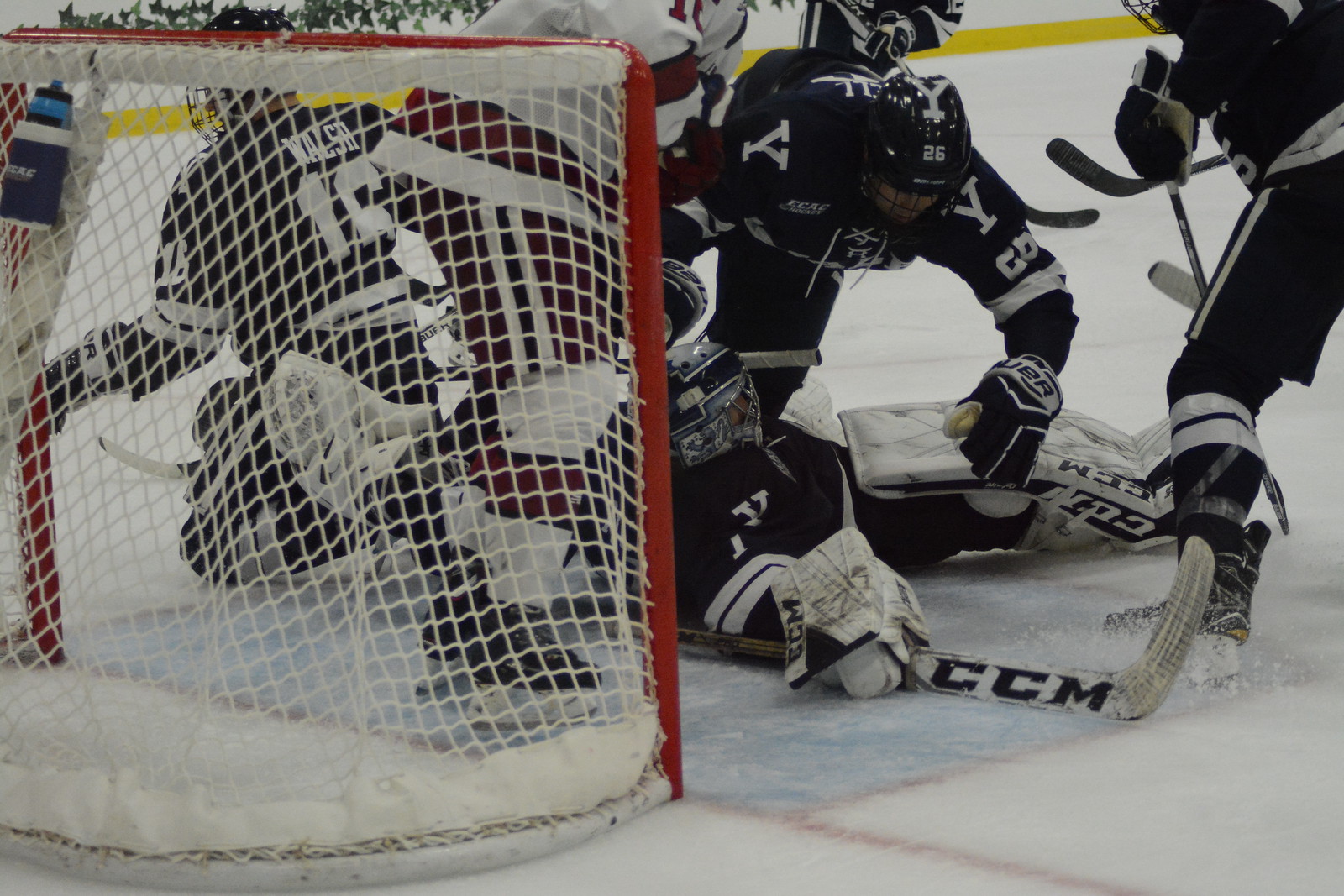 Despite the loss, Harvard threw 35 shots on Sam Tucker's cage. The Yale net-minder faced chaos around his paint all night. By Amanda M. DiMartini

This roughhousing quickly backfired for the Crimson, who took multiple penalties in the third period.

“The game was tied 2-2…[and] I thought we actually played some pretty good hockey and had the game in a pretty good spot,” coach Donato said. “We make the mistake and then we give up the power play goal.”

With the energy ramped up, play continued for another ten minutes before Yale added a cushion goal on the power play. This time, the culprit was captain Ryan Hitchcock, with the Bulldogs’ 2016-2017 scoring leader Joe Snively picking up his first point of the new campaign.

Despite outshooting Yale 35-26, the Crimson couldn’t solve Tucker enough times to keep pace with the Bulldog attack. DeMontis left Cambridge on Friday night with the Tim Taylor Cup, awarded to the most outstanding player in the annual Harvard-Yale game hosted by the Crimson.

Harvard will have one more chance to prepare for its impending nine-game road stretch in Saturday’s bout with Brown.

“At the end of the year, you want to be playing your best hockey,” said sophomore forward Nathan Krusko. “Whether it’s getting certain kinks out of the way early on in the season, working out some systems, changing up lines, making sure we have the right chemistry going on—that’s some of the stuff you’re going to see.”