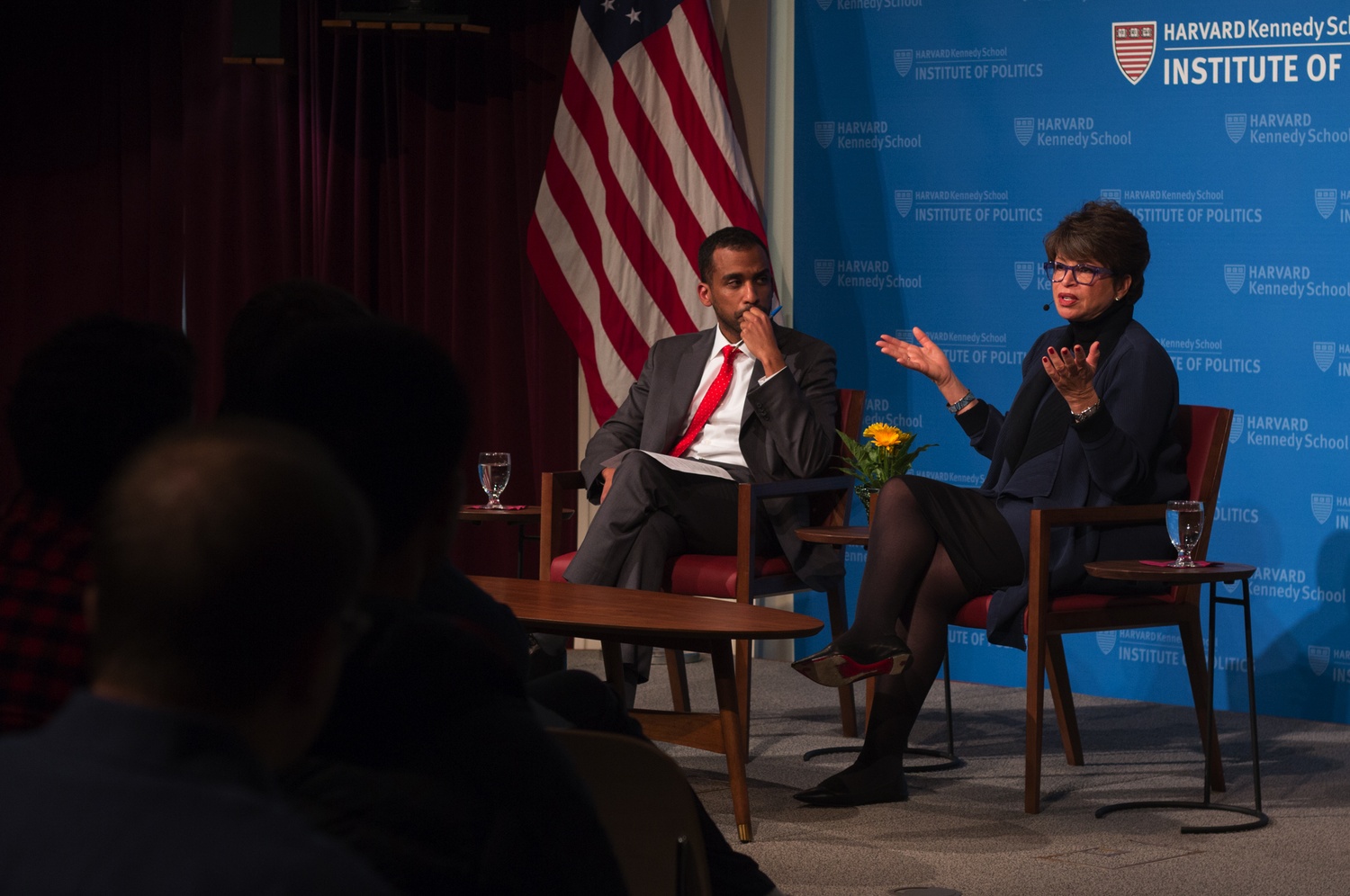 Valerie Jarrett reflects on her experiences as Senior Advisor to President Barack Obama. She was joined in conversation by Yohannes Abraham, her former chief of staff and former senior adviser on the National Economic Council, at the Institute of Politics Wednesday night. By Caleb D. Schwartz
By S. Bryan Wu, Contributing Writer

Former Senior Adviser to President Barack Obama Valerie J. Jarrett reviewed the highs and lows of the Obama administration and gave an insider’s perspective on the 44th president of the United States at an Institute of Politics event Wednesday night.

Jarrett, who served as Obama’s advisor from 2009 to 2017, spoke for roughly an hour. She said the role of senior adviser involved performing a wide range of tasks—from working on Obama’s presidential transition team to collaborating with Republican governors to manage the 2010 Deepwater Horizon oil spill.

“It was invigorating, it was terrifying,” she said. “I have never seen so many people work so hard under such extraordinarily challenging circumstances.”

Jarrett said this electrifying work style was typical of her time at the White House. She pointed to one especially hectic week in June 2015 when the Supreme Court upheld the Affordable Care Act and ruled in favor of legalizing same-sex marriage—all while the nation was still reeling from the deadly June 17 shooting at a church in Charleston, S.C.

Jarrett devoted a large portion of her visit Wednesday evening to discussing her personal relationship with the Obamas. She said she spent a lot of time with the Obamas—who she said are like “family” to her—in Chicago in the 1990s, and that she particularly remembered recruiting Michelle Obama to work for the Chicago city government.

She also shared favorite memories of Barack Obama, like the time a veteran surprised the then-United States Senator with a badge he had long worn on his uniform.

“[The veteran] said, ‘I’ve carried this with me for 40 years. It’s kept me safe while serving our country. It’s given me courage during tough times. And you have a heart, and I want you to have it,” Jarrett said. “And then, I burst into tears.”

Jarrett said Obama carried trinkets like the soldier’s badge around the White House with him almost every day. She referred to the veteran’s gift—and Obama’s response—as one of the reasons she chose to work in government in the first place.

She said she has never regretted choosing to spend her career in public service.

Jarrett closed the evening by calling on young people to vote and run for office.

“Own your ability to be the change,” she said.