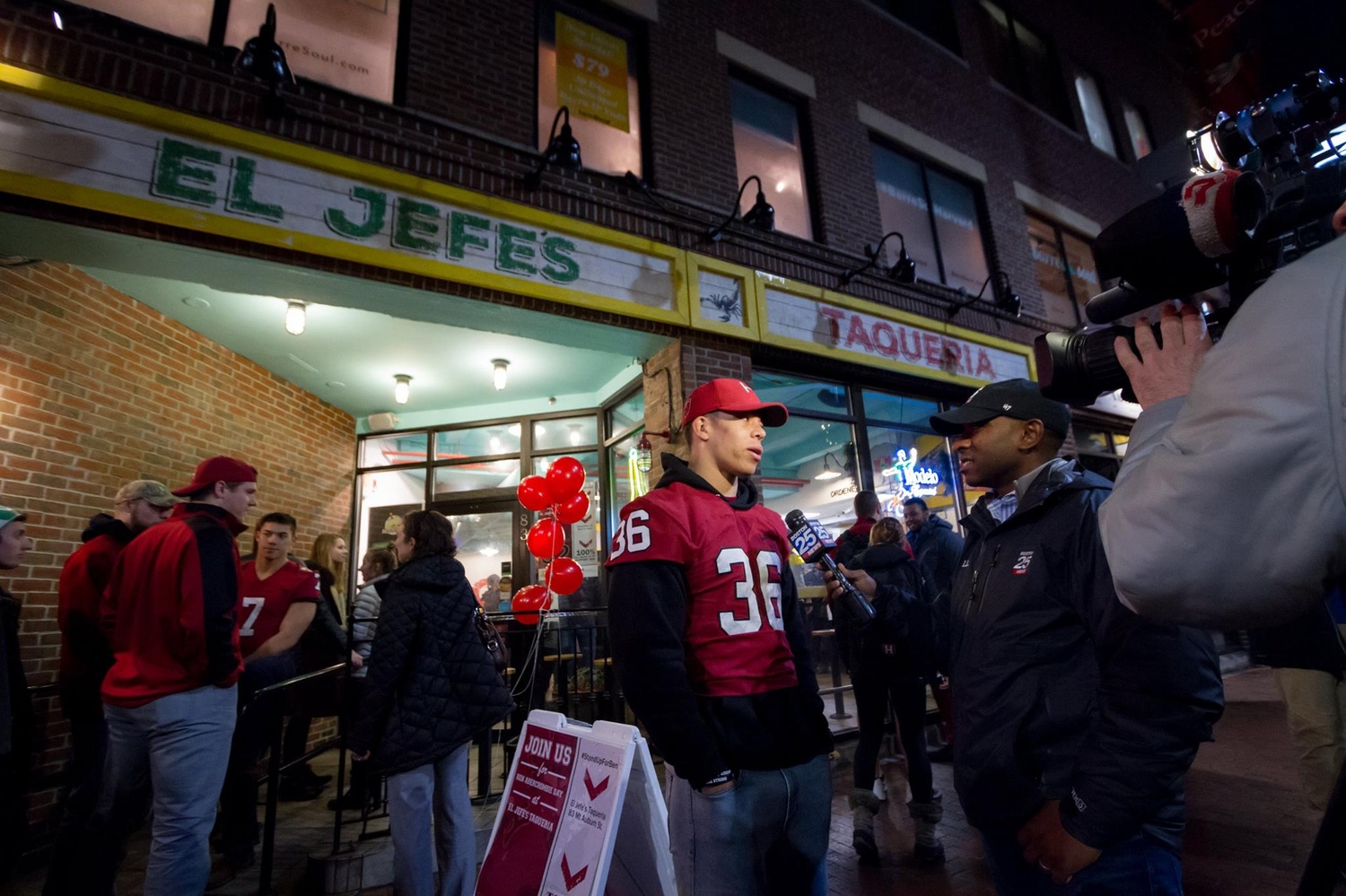 Tanner J. Lee '18, a safety on the football team, speaks to local newscasters outside El Jefe's Taqueria during the fundraiser in aid of Ben M. Abercrombie '21, who suffered a catastrophic injury during a game earlier this semester. By Courtesy of Harvard Varsity Club
By Madeleine R. Nakada, Crimson Staff Writer

Over 2,000 Harvard affiliates stopped by El Jefe’s Taqueria Tuesday to munch on tacos and burritos as part of a fundraiser for a freshman football player who remains paralyzed after suffering a serious injury, ultimately raising $27,000 over the course of the day.

The fundraiser ran from 8 a.m. to 4 a.m.; throughout, El Jefe’s donated all revenue to The Benson M. Abercrombie ’21 Fund, which—named after freshman linebacker Abercrombie, who suffered the injury—will provide financial help to the Abercrombie family. In addition to helping the Abercrombie family, the Fund is meant to financially assist any athlete who “incurs a severe or catastrophic injury” during competition.

Abercrombie suffered a major cervical injury on Sept. 16 in a game against Rhode Island. After spending two months at the Shepherd Center in Atlanta GA, he is still unable to move his limbs or breathe on his own.

The Harvard Varsity Club started the Abercrombie Fund roughly two weeks after Abercrombie’s injury on Oct. 4. To date, the trust has garnered over $266,000.

El Jefe’s owner John Schall announced Tuesday’s fundraiser on Nov. 29. Roughly $20,000 of Tuesday’s proceeds came from food sales, while an additional $7,000 came from donations made both at the restaurant and online.

Members of the Harvard football team stayed at the restaurant from 8 a.m. Tuesday to 4 a.m. Wednesday morning, keeping the crowd energized and collecting donations. Despite freezing temperatures, by 6 p.m. the line was out the door. Members of the football team wiled away the hours blasting music on the sidewalk and occasionally dancing with customers in line.

Jerrica H. Li ’20, a student who participated in the fundraiser, said she was surprised by the length of the line.

“I thought that the turnout was really, really amazing,” Li said. “The line when I got there was not quite out the door but I think by the time dinner started hitting, yeah, that line went down the block.”

Senior safety Tanner J. Lee ’18, though, said the turnout is exactly what he expected from Harvard affiliates.

“That’s what I expected. I mean the Harvard community is really connected, especially the football team,” Lee said. “I didn’t know we were going to raise [nearly] $30,000, that’s a crazy milestone. We were thinking we might, our highest guess was like $20,000.”

Alyssa C. Saldaña ’21, a member of the softball team, wrote in an email that she also thinks the high turnout underscores the strength of the Harvard athletic community.

“As you walked in, there were members from not only the football team but the entire athletic and Crimson community greeting and welcoming people in,” Saldaña wrote. “It was truly something special to see so many people come together to rally behind Ben and the cause he is standing for.“

Andrew D. Chesebro, Assistant Director of Marketing and Communications for the Harvard Varsity Club, wrote in an email that Tuesday’s fundraiser would not have been possible without generous donations from Schall and El Jefe’s.

“We would like to say a special thank you to John Schall, whose leadership drove this effort from day one,” Chesebro wrote. “This was a very personal day for John, and we cannot thank him enough for his incredible generosity and friendship.”

Abercrombie tweeted his gratitude to everyone who came out to the fundraiser, writing that he felt “thankful and appreciative” for attendees and for El Jefe’s.

Lee, who visited Abercrombie over Thanksgiving break, said he thinks Abercrombie has remained positive throughout the ordeal.

“From talking to him I think his spirits are high as they’ve always been and I think he’s definitely going to fight this again and I hope he can regain everything,” Lee said.