The Crimson nabs its first pair of back-to-back wins this season, trying to make up for a rocky 2-5-1 start 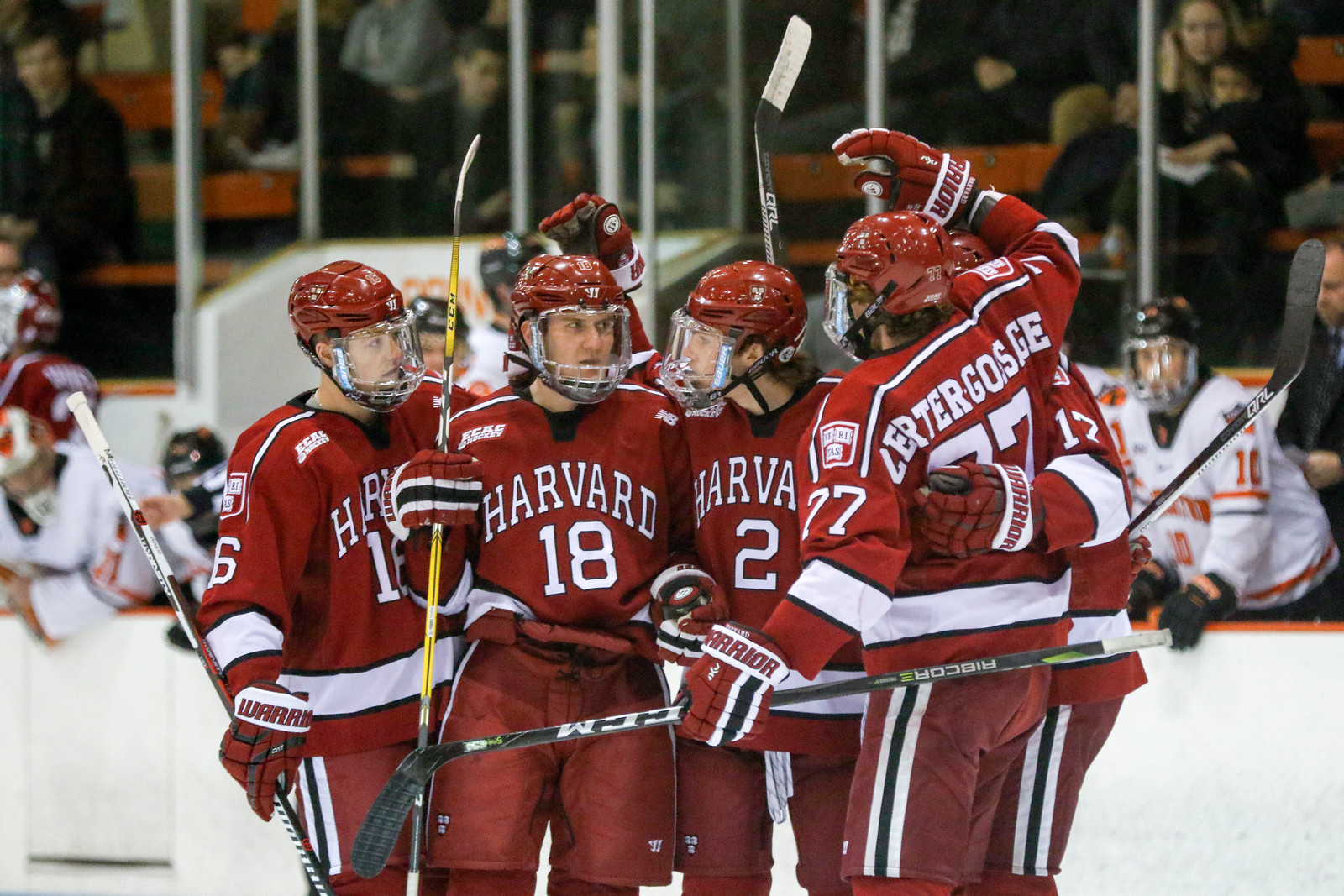 The top power play unit celebrates after freshman Reilly Walsh's one-time snipe from the right circle. Walsh kicked off the scoring for his team, who executed again on the man advantage later in the period. By Timothy R. O'Meara
By Spencer R. Morris, Crimson Staff Writer

PRINCETON, N.J. — For an entire month, the outlook was bleak for the Harvard men’s hockey team. Behind a frustrated offense, the losses kept piling up, and the Crimson found itself bumped out of the USCHO poll for the first time in a year and a half.

Finally, though, Harvard (4-5-1, 4-3-0 ECAC) has something to build on after registering its first four-point weekend of the season. A 5-2 triumph over Princeton on Saturday completed the weekend’s back-to-back wins.

“We came out and started the game pretty strong,” Crimson coach Ted Donato ’91 said. “We had some good puck-possession shifts…and took advantage of the power play…[but] we had some stretches where we looked like we’re still learning how to play with a lead.”

Leaning on an effective man-up unit, Harvard controlled play early against the Tigers (5-6-1, 3-5-1) and maintained a multi-goal lead for the majority of the contest.

Special teams told the story on Saturday, as the Crimson entered the second period with a two-goal advantage after bookending the first frame with a pair of power play strikes. The cushioned lead did not last long, however, as the Tigers executed on a power play goal of their own almost five minutes into the second period.

After a failed clear attempt by the Crimson killers, Princeton junior Max Véronneau zipped the puck into the slot for senior David Hallisey, who sent it top-left on junior goaltender Michael Lackey.

“I think the puck just rolled on one of our defenseman’s sticks as he tried to get it up,” Lackey said. “[Hallisey] just had a nice shot.”

Like Harvard, however, the Tigers weren’t content with just one goal on the man-advantage. In the final frame, the Tigers potted another power play goal courtesy of senior forward Eric Robinson. 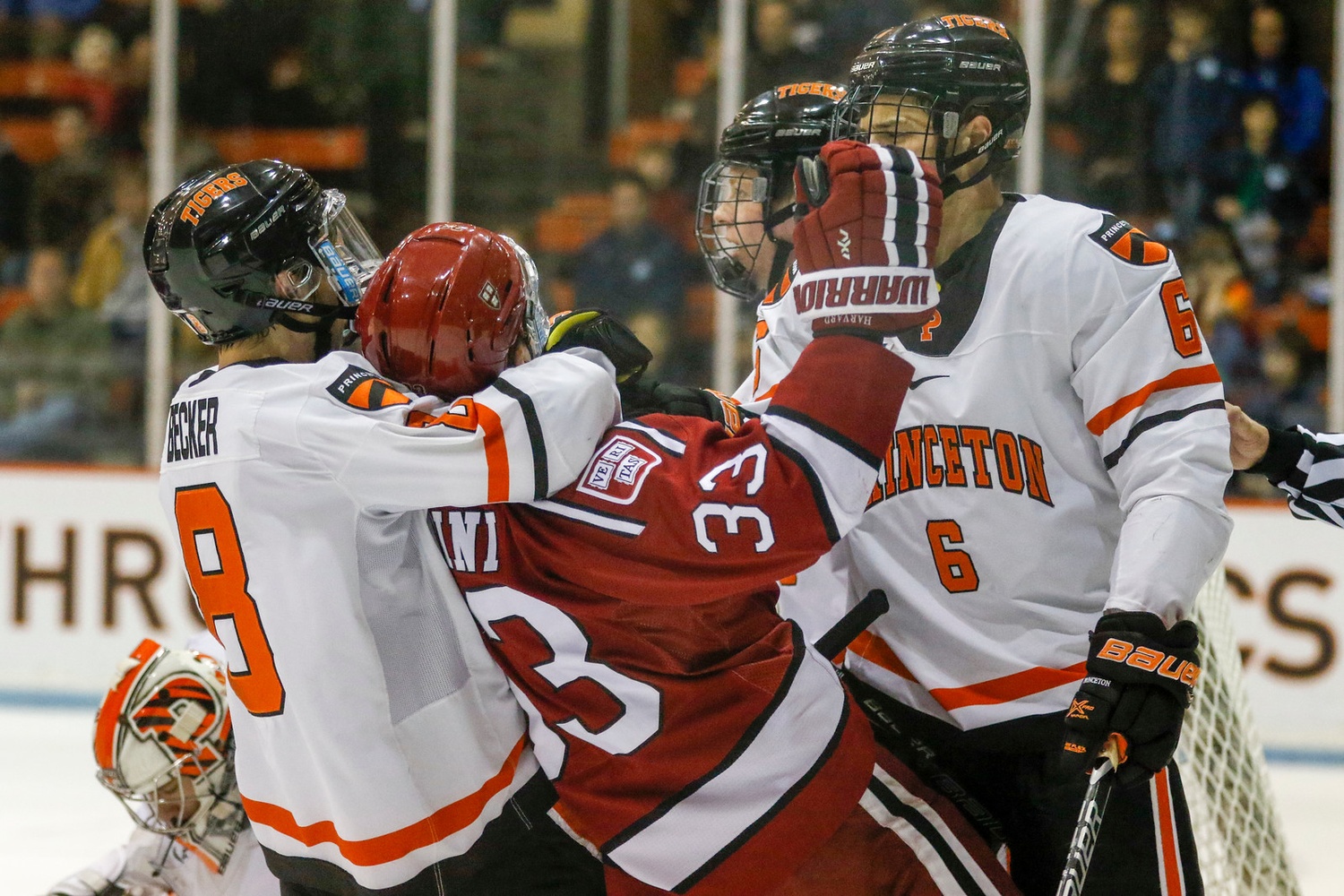 The Crimson’s porous penalty kill was somewhat uncharacteristic, as the team entered Saturday’s contest having relinquished just four goals all season—killing at a rate of 89%—while man-down.

“Tonight our power play stepped up,” coach Donato said. “Our penalty kill has been pretty solid all year and we gave up a couple tonight. When it’s all said and done, there are still a lot of things that we need to improve on.”

Two even-strength tallies in the waning minutes of the second extended the Harvard lead to three goals before the final third of the contest. Junior forward Ryan Donato scored his fourth goal of the weekend on a counter-attack following a promising Tigers chance at the other end. Just a minute later, towering defenseman Wiley Sherman wristed a shot past opposing goaltender Ryan Ferland, providing his team with some extra comfort before the period horn.

The Crimson almost exited the ice after 40 minutes with a four-goal lead, as an Adam Fox backhand attempt was waved off in the final seconds. A delayed too-many-men penalty on Harvard negated the goal, in spite of a challenge by coach Donato.

Despite theCrimson ceding the two power play goals later in the game, sound execution on special teams gave Harvard its early 2-0 edge. First, the man-down unit was called upon, as junior defenseman Jacob Olson, who rejoined the starting lineup on Saturday night after a few games as a healthy scratch, took a slashing penalty a mere two minutes into the game. A sturdy killing effort, however, washed out any hope of an early Princeton score.

Under three minutes later, the Crimson’s special teams were again tested—this time, it was the power play that shined. Just 33 seconds after Tigers forward Luke Keenan was boxed for tripping, Harvard’s first man-up unit cashed in on Ferland.

Donato worked the puck up to sophomore point-man Fox, who furthered it along to rookie blue-liner Reilly Walsh. From the right circle, Walsh ripped a one-timer that beat Ferland on the far side.

“We moved the puck well and had a bunch of looks,” coach Donato said. “We think our power play has looked really good almost all year. We just haven’t been able to cash in.” 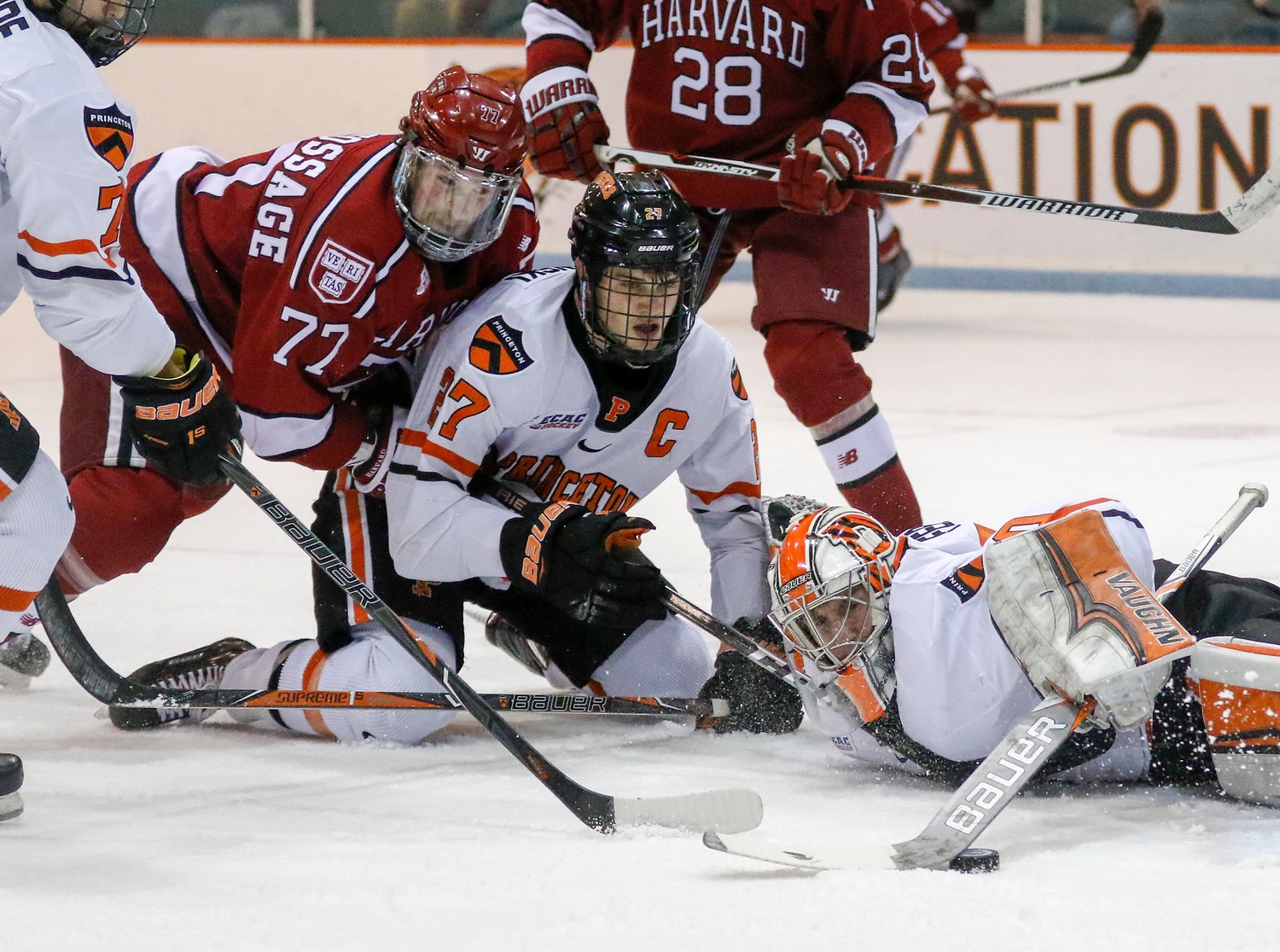 Junior forward Lewis Zerter-Gossage spent a lot of time in the slot and around the Princeton goal on Saturday. This hard work paid off, as the top-liner buried a power play wrist shot from the slot in the first period. By Timothy R. O'Meara

With the secondary assist on the Walsh rocket, Donato extended his season-long point streak to 10 games.

Even during stretches of five-on-five hockey, Harvard dominated the first frame, outshooting Princeton, 21-6. With much of the opening period being played in the Tigers’ defensive third, the Crimson drew multiple penalties on tired Princeton skaters. After the Walsh goal, Harvard’s power play received two more man-up chances in the first period.

“[Wearing the other team down] is something that we’ve tried to pride ourselves on for years now,” junior forward Lewis Zerter-Gossage said. “Getting it deep, working behind the defense, we’ve worked on it a lot in practice and…we’ve been drawing penalties. We’ve been scoring goals off it.”

While the Crimson failed to convert on its second attempt with the extra man, another tripping infraction from Princeton late in the frame led to a Zerter-Gossage goal. The winger snatched the puck from the corner-boards and, despite an open Donato tapping his stick on the ice, called his own number in the slot. Zerter-Gossage’s wrist shot snuck past Ferland just 24 seconds into the power play.

After the Tigers answered Harvard’s earlier power play goals with man-up success of their own, an empty-net goal from freshman forward Jack Badini put the Tigers to bed. Badini secured a 5-2 win despite a rallying effort from Princeton in the third period, as indicated by a 14-2 disparity in shots. 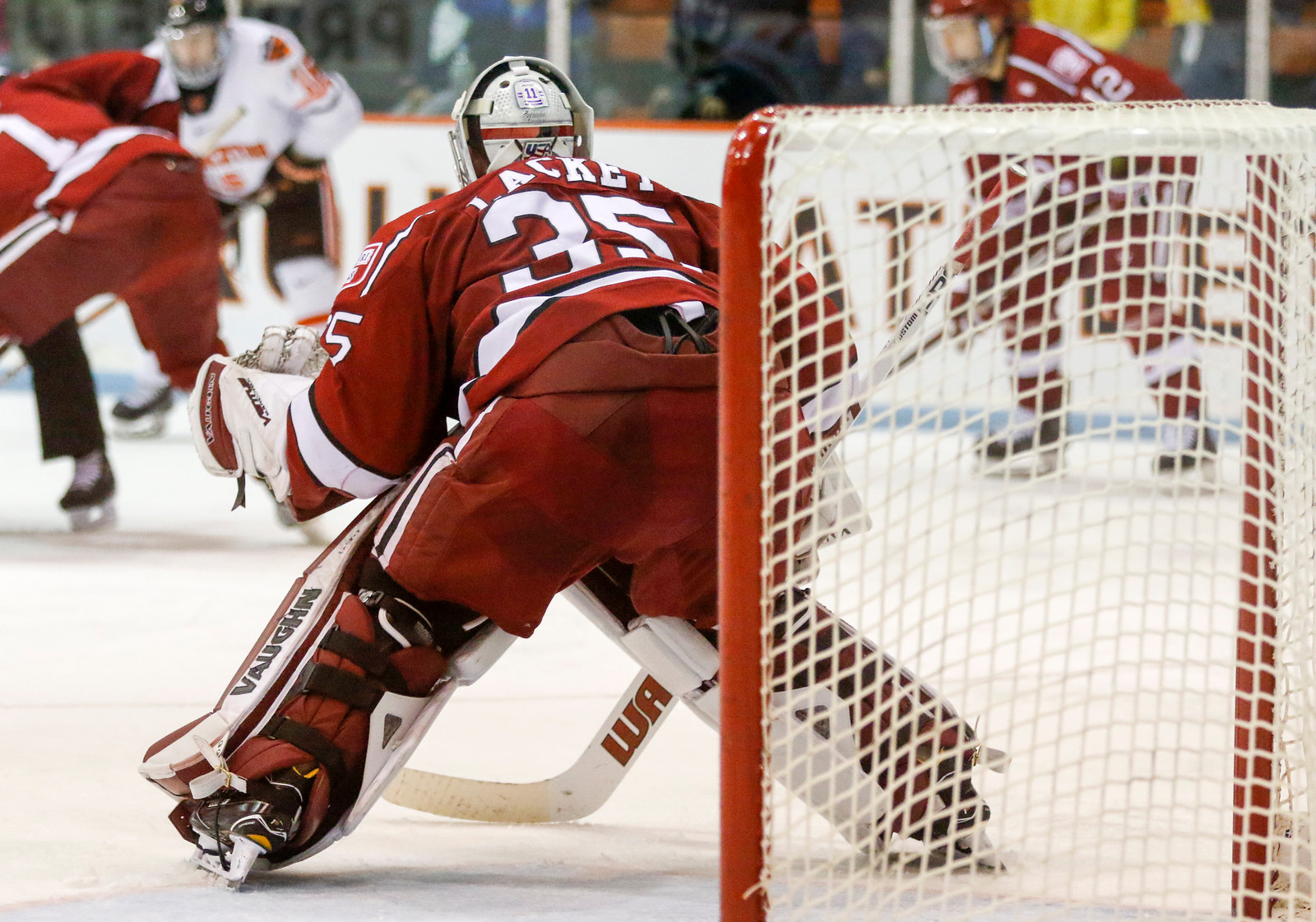 After a win against Quinnipiac the night prior, coach Donato went with junior goaltender Michael Lackey again between the pipes. The net-minder picked up another win on a relatively light workload on Saturday. By Timothy R. O'Meara

Coach Donato will still take the solid start, which has been a point of emphasis all season long in the locker room.

“Establishing that lead by getting off to a good start is always a good recipe for success,” the bench boss said.

On Saturday night, coach Donato rode Lackey’s strong play after the junior nabbed a win in his first action of the season the night before. This change between the pipes comes at a cost, however, as tri-captain Merrick Madsen has been forced to watch from the sidelines this weekend, ending his 55-game start streak spanning three seasons.

Lackey finished the weekend with a 2.00 goals against average and .940 save percentage, numbers that should earn him more starts in the future.