Second Half Surge Pushes No. 7 Kentucky Past Men's Basketball, 79-70 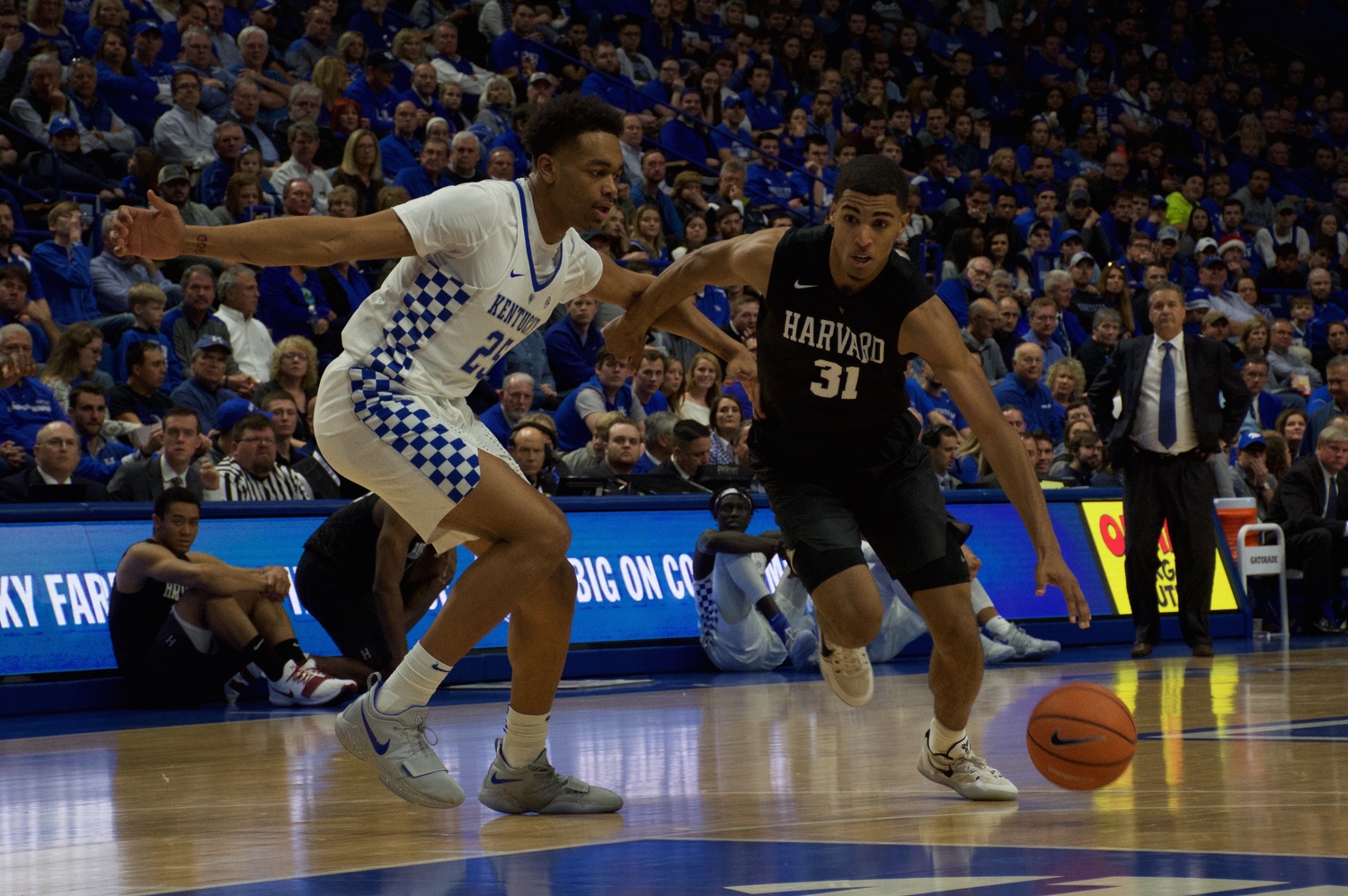 Lexington, Ky.—After 20 minutes of play, what was expected to be a runaway win for No. 7 Kentucky was a five-point game heading into the locker room. Sophomore forward Seth Towns was leading the Harvard men’s basketball team with 14 points, and a Crimson team that had struggled mightily from three earlier in the season was shooting 41 percent from beyond the arc.

The momentum carried into the early second half. With 15:47 on the clock, a free throw from sophomore guard Bryce Aiken pulled the Crimson within four, 49-45.

The crowd of 22,922 blue-and-white faithful looked up at what could only be described as an unexpected score.

With Harvard inching closer, however, the Wildcats locked down midway through the second. In a five-minute span, Kentucky went on a 17-2 run that would put the hosts on top, 72-54, with eight minutes left on the clock.

Despite a late run from the Crimson (3-6) that saw Harvard hold the Wildcats (7-1) without a field goal for the last 2:31, the deficit would prove too large to erase, as the Crimson fell to Kentucky, 79-70. 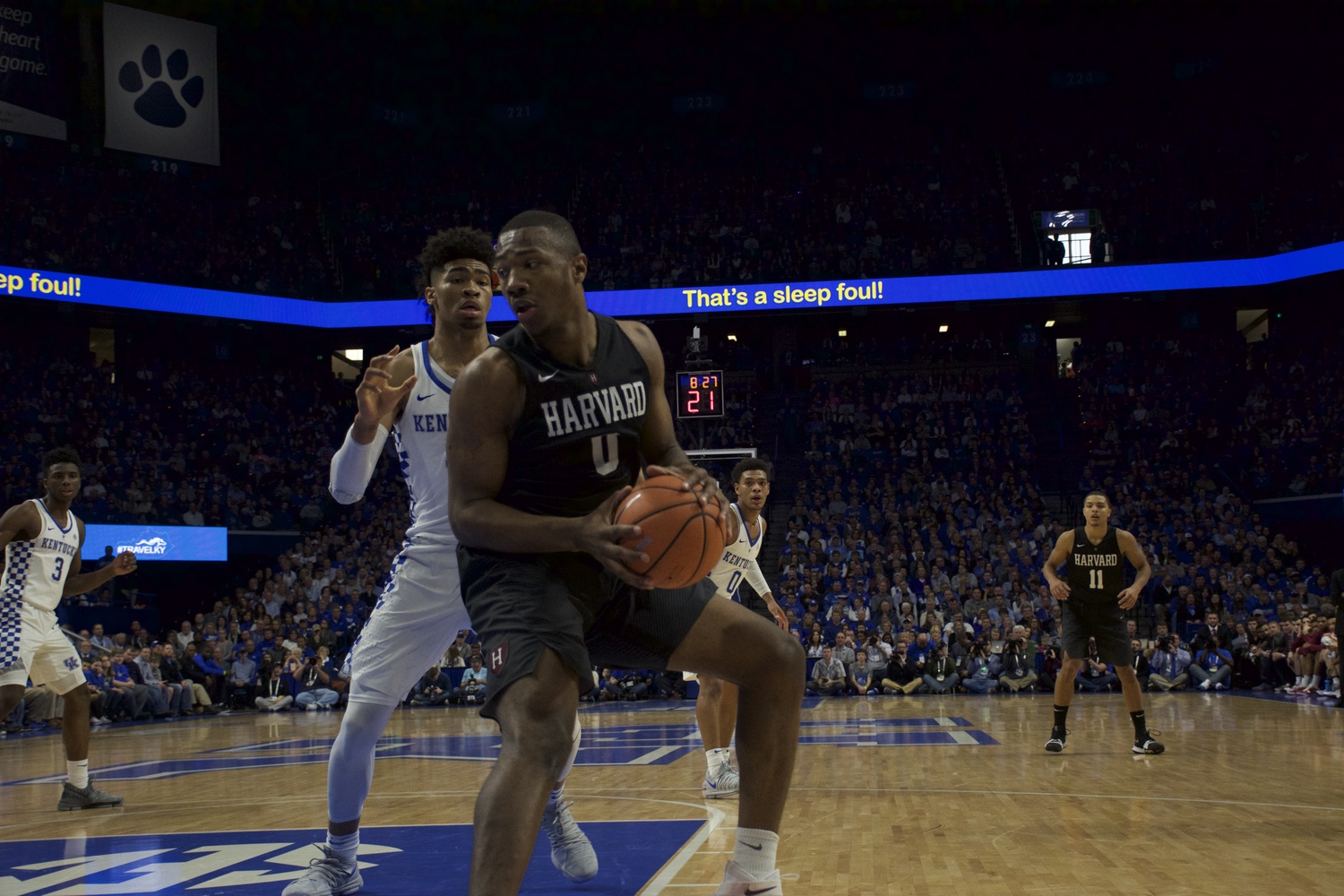 Sophomore forward Chris Lewis backs up in the paint. He finished with nine points on 3-of-12 shooting. By Sam Danello

“Especially in this environment, I thought we were putting things together for a while and kept it interesting,” head coach Tommy Amaker said. “Our kids competed. Their length and size on the backboard and not having some of our better players inside and out—with Chris Lewis and Bryce Aiken not really having good offensive games—hurt us.”

Aiken and Lewis, who combined for 46 points in their last outing at Northeastern, finished with nine points each while struggling from the field. The two shot a combined 5-of-24, while Aiken went just 1-of-7 from deep.

Although the lack of offense from Aiken and Lewis hurt the Crimson late, it was on the defensive end where Harvard allowed the Wildcats to ice the game.

During that span midway through the second half, the Crimson turned the ball over on six consecutive possessions—the Wildcats would capitalize on the other end, converting on all but one of the giveaways to take an 18-point lead. 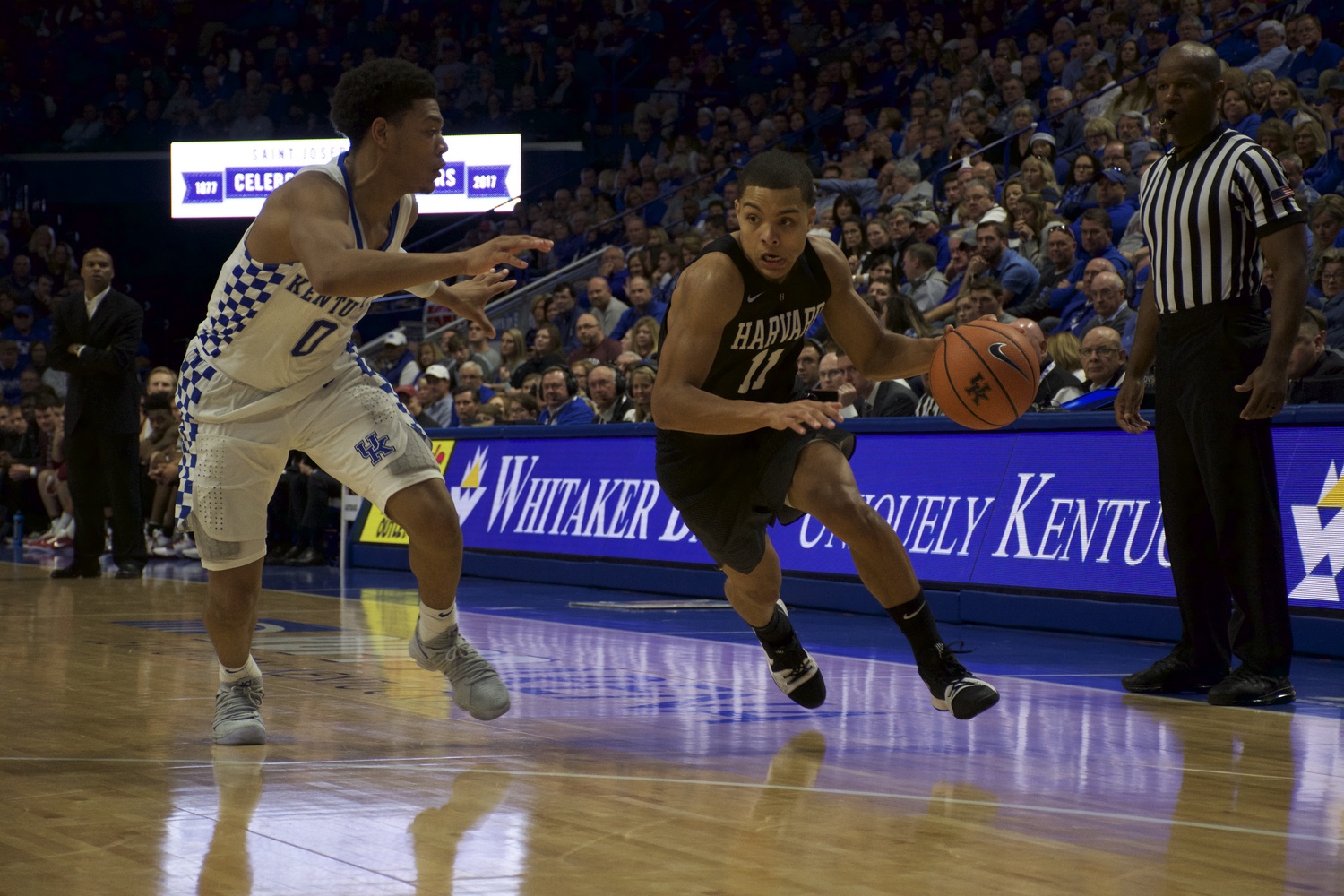 Point guard Bryce Aiken drives past Quade Green in the first half. By Sam Danello

“It got away from us a little bit. I thought that was our inability to maintain composure on the offensive end, which is a little disappointing for us,” Amaker said. “We have to do that in an environment like this.”

Led by freshman guard Hamidou Diallo, who capped off the Kentucky run with an and-one layup on the fastbreak, the Wildcats held on despite a late 9-0 push from the Crimson that saw consecutive threes from freshman guard Reed Farley.

Lewis, coming in as one of the Harvard’s most consistent scorers, struggled to keep up with the size and athleticism of Kentucky’s big men. Facing off against 6’11’’ forward Nick Richards, the sophomore, along with most of the team, struggled to put up shots inside. Kentucky finished the game with nine blocks. 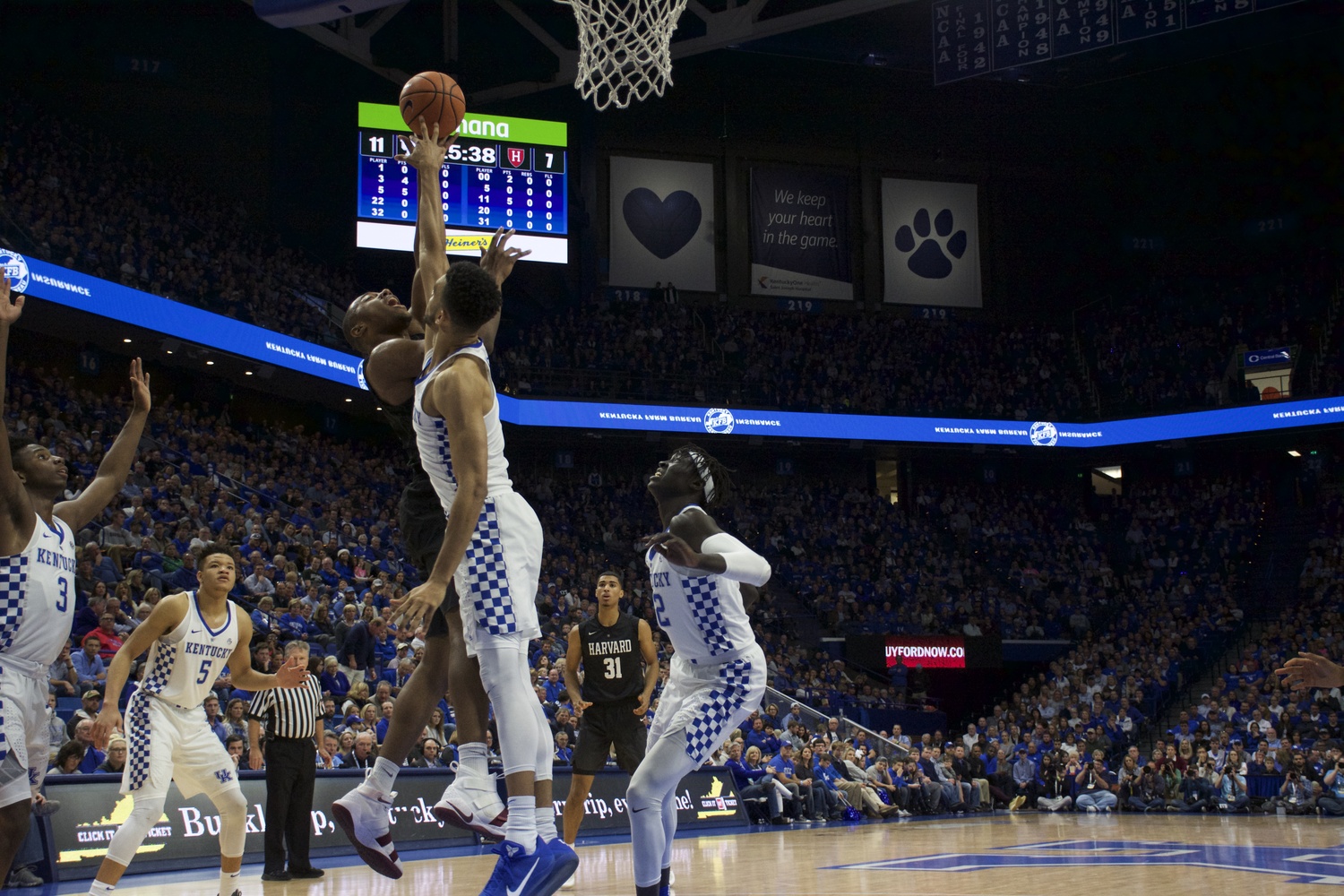 The Kentucky defense rises for one of its nine blocks on the day. By Sam Danello

Towns tallied a season-high 25 points to go with six rebounds and three assists on 6-of-7 shooting from deep.

“Credit to my teammates—they found me for a lot of key shots, and tonight I was just able to hit,” Towns said. “A lot of it came off assists, and when we’re able to do that, we’re moving the ball really well. That showed a lot today. Again, credit to my teammates for those passes."

What ended as a clear-cut victory for Kentucky began as a back-and-forth effort from both sides.

While Harvard would never lead, timely threes from Towns and freshman forward Danilo Djuricic kept the Crimson within striking distance for the entirety of the first half.

After going down 15-7 five minutes into the game, Towns came up on the offensive end and drained threes on back-to-back possessions to hush the crowd at Rupp and put Harvard within two. 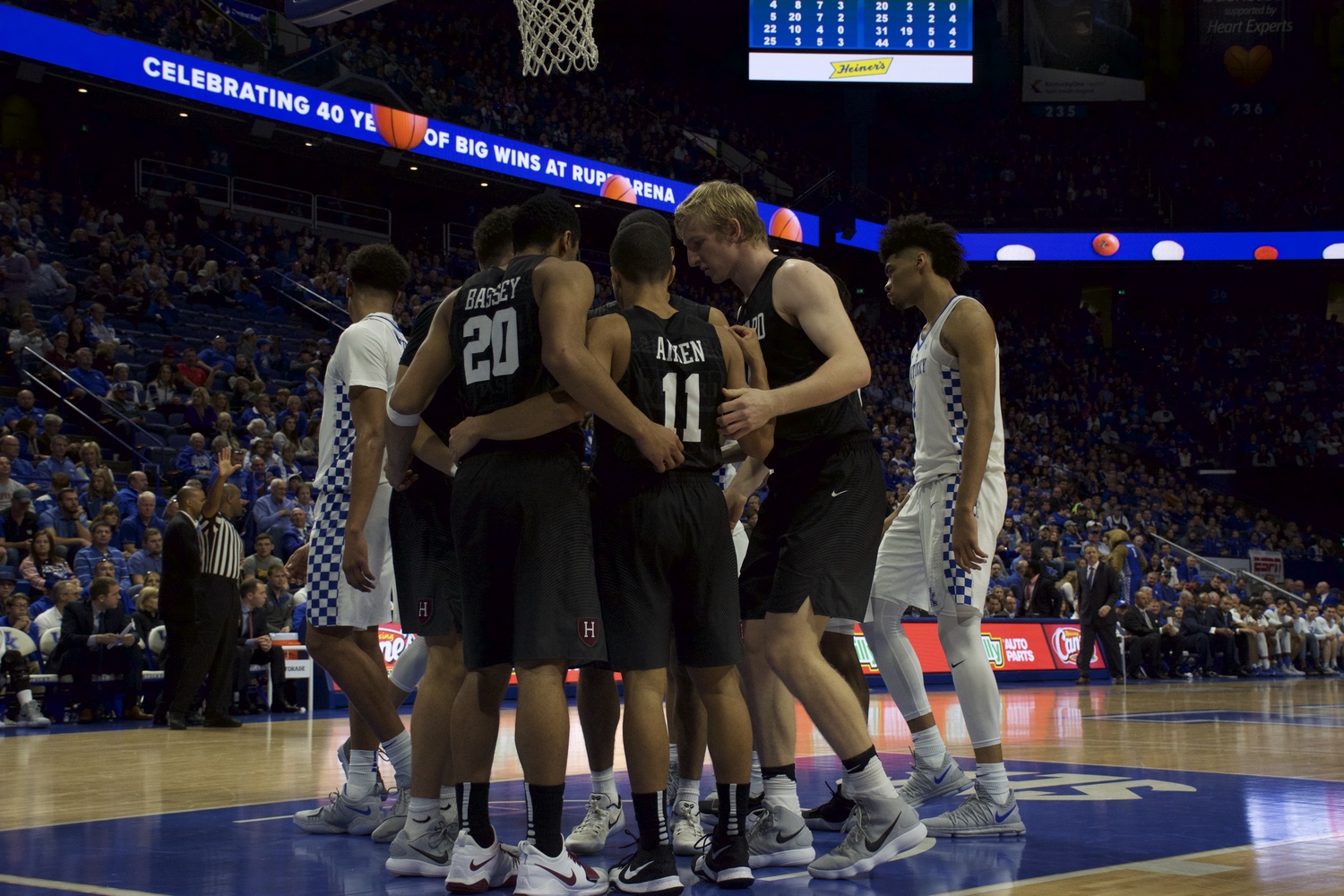 Harvard huddles during a stoppage in play against Kentucky. By Sam Danello

“Being able to play a competitive game here and put yourself in a position to win, you’ve got to manage the game,” Amaker said. “We thought we were doing that four minutes at a time and not letting runs and leak-outs and live turnovers.”

After another Wildcat run put the Crimson down 20-13, a young lineup of freshmen Rio Haskett, Farley, Djuricic, and sophomores Robert Baker Jr. and Henry Welsh kept Harvard in the game with timely shots and stops on the defensive end.

After a layup from Diallo gave Kentucky yet another seven-point lead midway through the first, it was Towns once again. Coming out of a timeout, the sophomore drained another set of back-to-back threes to put the Crimson within one at 30-29.

The two teams traded shots for much of the rest of the half, as Harvard kept it close. However, the Crimson’s difficult stretch in the second ultimately proved to be the nail in the coffin for Harvard, as the team suffered its third-consecutive loss. 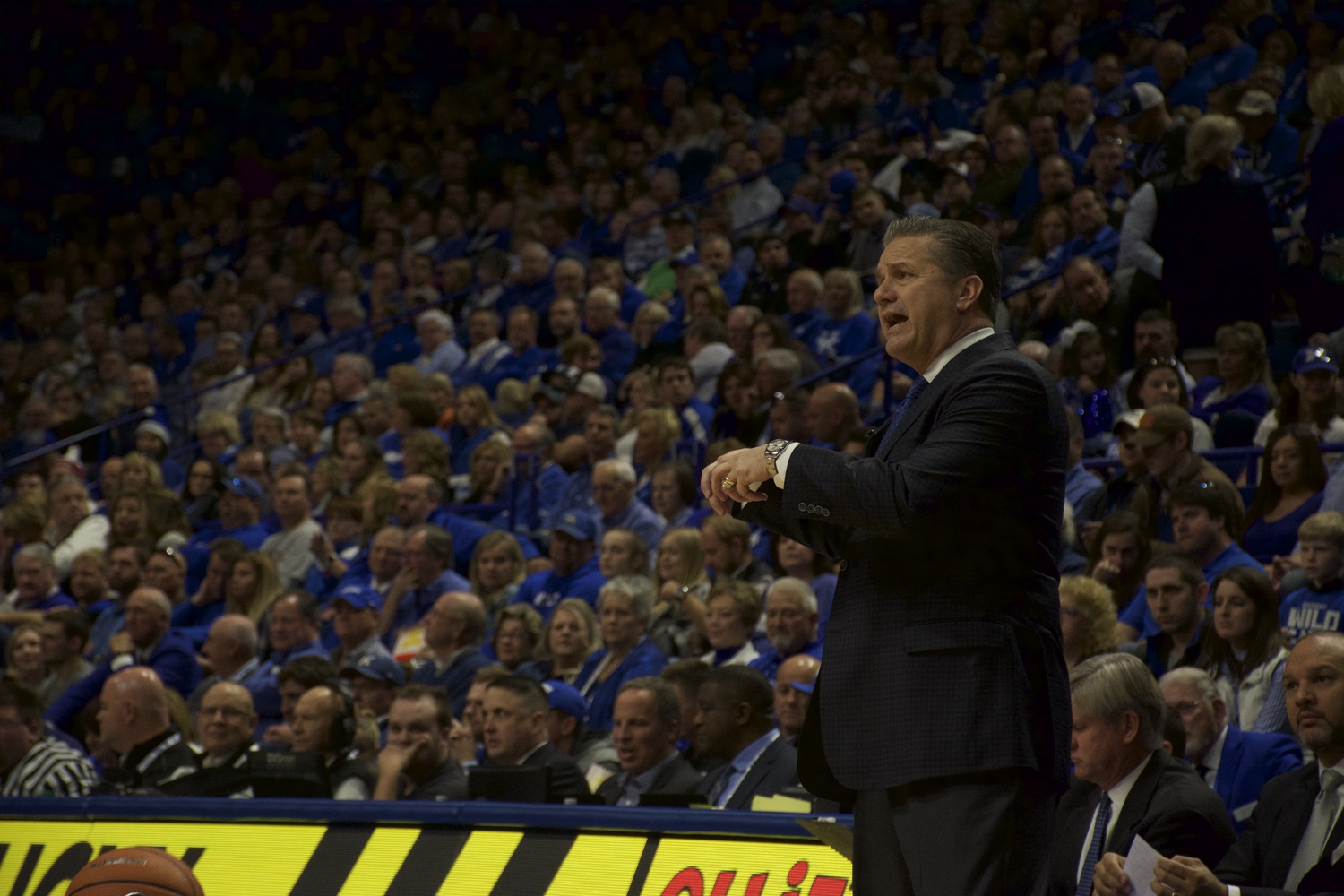 Kentucky coach John Calipari sends a message from the sidelines. By Sam Danello

“[Kentucky is] an outstanding team now, and I’m sure they’re going to get even a lot better,” Amaker said. “They play really hard, [and] they’re unselfish. Coach Cal has done an amazing job in all of his years of coaching and certainly what he’s done here.”