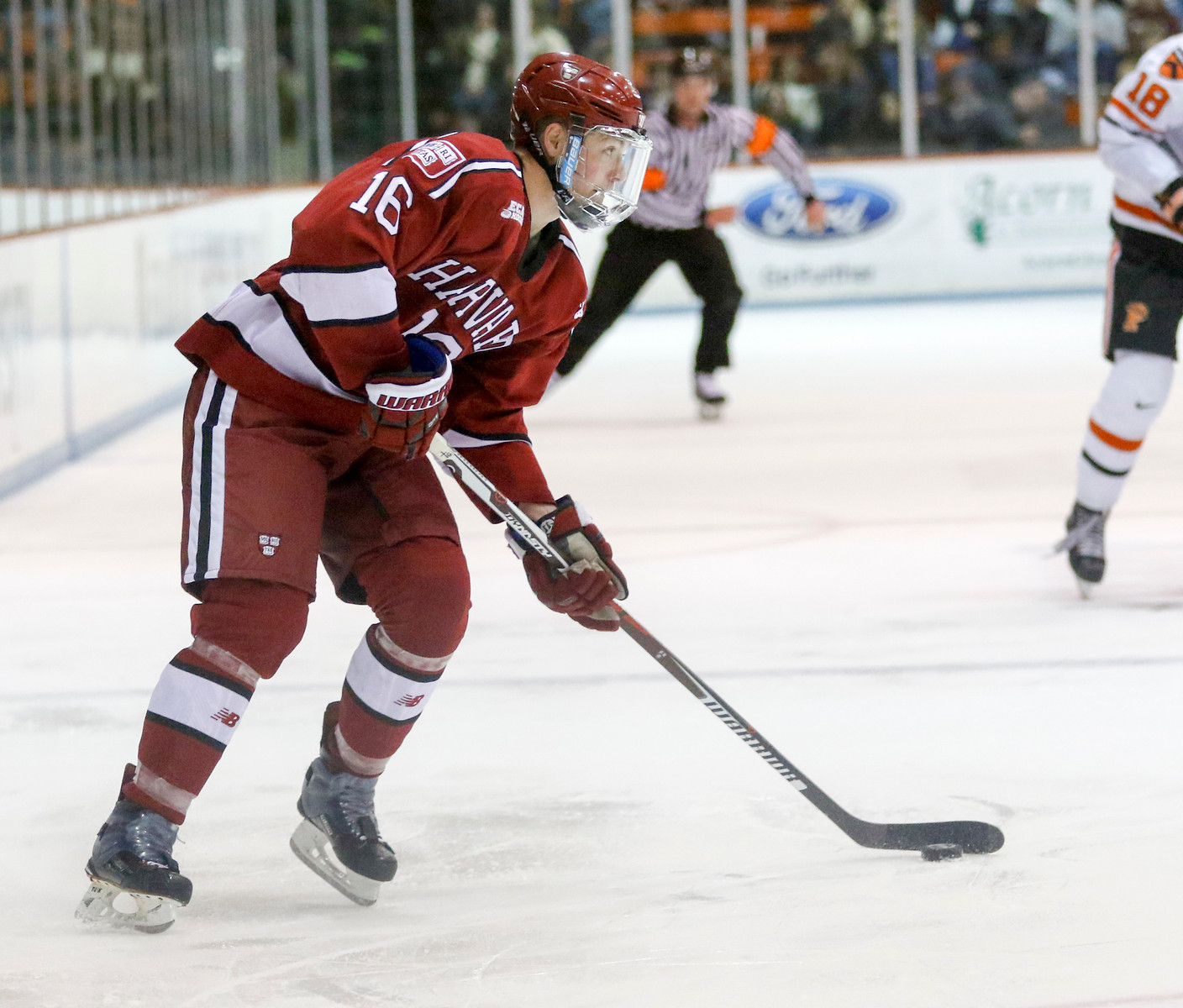 Junior forward Ryan Donato recorded his first four-point game of the season on Saturday at Vermont. With a goal on Friday night as well, Donato extended his season-long point streak to 12 games this weekend. By Timothy R. O'Meara
By Spencer R. Morris, Crimson Staff Writer

The Holiday Season has practically everything one can want: family, cheer, and relaxation, to name a few. If you’re a Harvard hockey fan, however, you might want to add mid-December games to your wish list.

After a four-week hiatus for final exams and the holidays, the Crimson icemen were back in action this weekend, squaring off against UMass-Lowell and Vermont in the Catamount Cup.

“It was tough to have that break because I felt like we kind of just started to establish a lot of the things we’d been working on as a group,” Harvard coach Ted Donato ’91 said. “But I thought that [this weekend] we got back to that a little bit more.”

The Crimson played without blue-liner Adam Fox this weekend, as the offensive-minded defenseman was busy in Buffalo, N.Y., representing the United States in the IIHF World Junior Championship. This marks Fox’s second appearance in the under-20 tournament, as he missed one game last season to skate for the stars and stripes.

The Jericho, N.Y., native, who is sporting the “A” as an alternate captain for team U.S.A., has been an integral component of Harvard’s defensive corps and a key facilitator on the power play since his very first game in a Crimson sweater. The void he has left, therefore, is noticeable.

“We can just be grateful that our D corps is as strong as it is,” said tri-captain Merrick Madsen. “[Fox’s] calm presence, I’ve never seen it be replicated…. We played strong as a D corps for the most part, and we just have to keep working on improving. If we can do well without Foxy, we’re going to be doing even better with him.”

With or without Fox, Harvard needs to make up ground in the ECAC after a disappointing string of games before the holiday break. This weekend’s split against two Hockey East foes keeps the Crimson below .500.

After an action-packed first period, which saw the Crimson leave the ice with a 3-1 lead, Harvard’s bout with the Catamounts remained uneventful until junior forward Ryan Donato potted an empty-netter late in the final frame to seal the victory.

With the casual wrister on the open goal, Donato completed his second hat-trick of the season. Back on December 1st, the Boston Bruins prospect likewise capped off a trio of goals with an empty-net tally.

“The power play got us off to a good start,” said coach Donato, spreading the praise instead of dwelling on his son’s stellar performance. “Then [the top] line made some plays—all three of them. It was a good effort all around.”

Donato also picked up an assist on sophomore forward Ty Pelton-Byce’s power play goal in the opening minutes of the game. Near the blue line, Pelton-Byce received the puck from defenseman Reilly Walsh and skated down to the right circle. A cross-ice give-and-go with Donato, who was stationed in his usual left-circle office, gave the sophomore time and space to put one past freshman net-minder Tyler Harmon.

Along with the hat-trick, the apple gave Donato his first four-point night of the season. Last year, the junior had four such performances.

Saturday marked Madsen’s return to his usual post between the pipes for the Crimson. Coach Donato decided to swap Madsen in for junior Michael Lackey after giving the back-up three straight starts.

“There’s a comfort in knowing that we have not just two, but probably three guys that could be Division-I starters,” Madsen said. “For myself, it felt like a tough time the last month or so. I think it was good to get a reset with the break and everything. I just told myself I want to come back, and the next opportunity I have, I’m going to make the most of it.”

Lackey’s strong play against Quinnipiac and Princeton at the start of December (2-0-0, 2.00 GAA, .941 SV%) fueled a bit of a goaltender battle for the starting spot. After a team-wide lackluster performance on Friday night, coach Donato handed the starting role back to Madsen, who started all 36 contests last season for Harvard, for Saturday’s game. 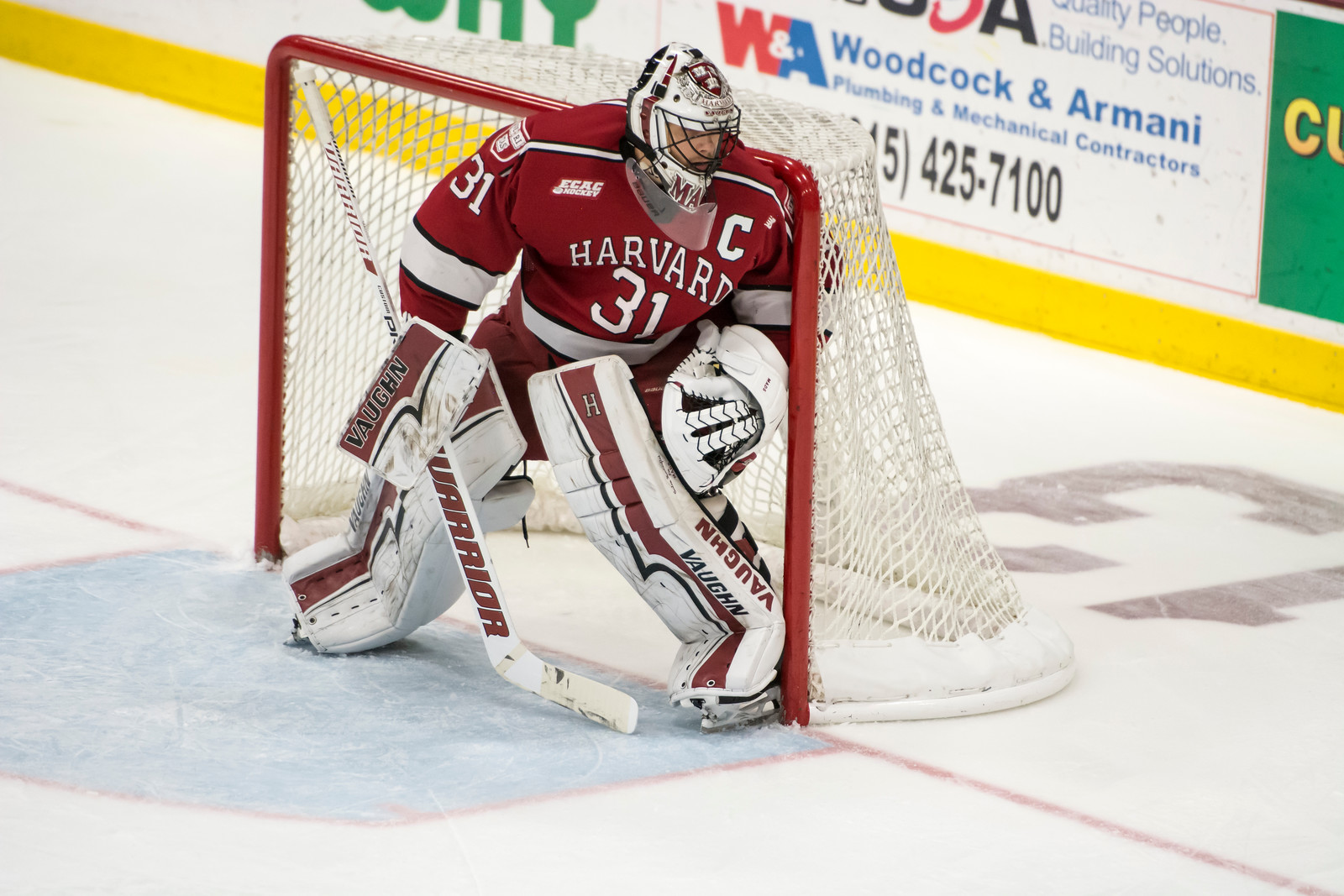 Tri-captain Merrick Madsen earned his starting role back from junior Michael Lackey on Saturday night. Lackey's short but impressive stint as Harvard's starting net-minder proved that the Crimson has multiple viable options between the pipes. By Courtesy of Colgate Athletics

While coach Donato did not reveal his net-minder plans moving forward, expect the Harvard bench boss to more readily yank a struggling backstop, as both have proven that they are capable starters.

“I don’t think we were fully committed [to a given goaltender] coming into the weekend,” coach Donato said. “We’re going to make a decision on every night and go with the guy that gives us the best chance to win. I don’t want to commit to anything but that. That’s what the guys expect…that guys will get rewarded for good play.”

In his first game back, Madsen looked solid, rejecting all but one of Vermont’s 28 attempts (1.00 GAA, .964 SV%). The Catamounts’ sole tally came early in the first period, after sophomore forward Ross Colton buried a rebound and spoiled Madsen’s initial sprawling save on a wrap-around attempt.

The Vermont goal evened the game after Pelton-Byce’s early strike. Five minutes later, though, Donato’s first snipe of the night restored Harvard’s lead and was ultimately the game-winner for the Crimson.

On Friday night, Harvard also jumped on the opposition early in the first frame. Donato took all of 32 seconds to ink the score sheet, giving his Crimson the early 1-0 lead.

Freshman forward Henry Bowlby backhanded a puck toward the cage, where junior goaltender Chris Hernberg left a long rebound for Donato. The Scituate, Mass., native sent a wrister off the crossbar and into the net.

Harvard’s lead, however, was fleeting. The squad enjoyed the advantage for all of three minutes before junior forward Nick Master notched the game for UMass-Lowell. The Crimson would never regain the lead, as the River Hawks seized control of the game in the second period with an early tally from captain Tyler Meuller.

“We got off to a good start and through two periods played pretty decently,” coach Donato said. “We certainly had some chances that we didn’t execute on.”

Hernberg posted multiple acrobatic saves in the second frame, making it difficult for Harvard to claw back into the contest. He did cave once more, though, this time to tri-captain Eddie Ellis.

Sophomore forward Colton Kerfoot, in just his fourth appearance of the season, fed Ellis a nice centering pass from behind the goal. The senior had his hands free and buried the puck for his first strike of the year.

“[The bottom] line has been working hard and it was a big goal to get the game tied at two,” coach Donato said. “They’ve certainly had some chances, and it was nice to see a lot of [Eddie’s] hard work pay off for him.”

Despite the fourth line’s effort to equalize the game, UMass-Lowell tilted the ice in its favor in the third period, outshooting the Crimson 14-2 and potting two more goals, including the empty-netter.

“I thought the third period was our worst,” coach Donato reflected. “We took a couple of penalties, and we allowed the fourth goal to make it a two-goal game…. Our overall execution and determination needed to be a lot better.”

This final-frame disparity in attempts caused Harvard to be outshot for just the third time all year.

With the goal on Friday and the four-point effort the following evening, Donato extends his point streak to 12 games—the length of the season.

Donato’s streak is one of the few positives the team can take away from this weekend, as Harvard still sits well below where it wants to be in the standings. To make up ground, coach Donato’s squad needs to build sizable winning streaks.

“Obviously, to stay over .500, you have to be able to string some wins together,” Madsen said. “[J-term] is a great opportunity for us to buckle down and string a few together. Historically, J-term has been a time where we’ve usually had to kind of reset, and I’m hoping that maybe this year we can use this as an opportunity to make a jump in the league as opposed to dropping games.”

After nine straight games away from home—a road stretch spanning two months—the Crimson, still in pursuit of .500, will finally return to Cambridge next weekend for tilts with RPI and Union.