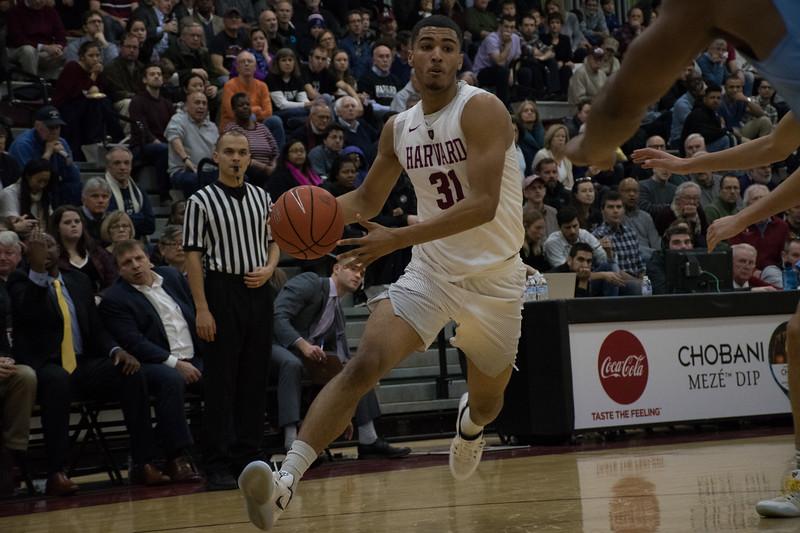 Seth Towns, pictured above, finished with a game high 20 points on 8-of-12 shooting to give the Crimson a win at home against Columbia.
By Theresa C. Hebert, Crimson Staff Writer

Seth Towns, pictured above, finished with a game high 20 points on 8-of-12 shooting to give the Crimson a win at home against Columbia. By Megan M. Ross

For Harvard men’s basketball coach Tommy Amaker, Friday night’s game against Columbia was a bit of deja vu to the last time his team faced the Lions. Only this time around, his team was on the winning side of the equation.

After building an 18-point first half lead, the Crimson saw Columbia claw back and eventually take a one-point advantage with 3:12 remaining in the second frame. Though Harvard bent, it didn’t break, and the team eventually escaped with a 78-72 victory.

“They’re a very dangerous team and they beat us at their place and played really well, and we came back on them,” Amaker said. “It was a very similar kind of game to be very honest. They held on at the end [at Columbia] and we held on today.”

The Lions hushed the crowd at Lavietes Pavilion when freshman guard Mike Smith scored a fastbreak layup after stealing an errant pass from senior co-captain Corbin Miller. The bucket capped an 8-0 run and put Columbia up 70-69, its first and only lead of the game.

But Miller didn’t let the turnover best him. Instead, he capitalized on his team’s next trip down the floor and sunk an open three to give Harvard a lead it would not relinquish.

“Obviously he was disappointed in that play after making the turnover, but having the toughness and the guts to step back up, have the open shot and bury it—what a lift for our team in a moment,” Amaker said. “But as a senior you would expect plays like that.”

Up 72-70 with 2:42 to go, Columbia would not hit another shot until Smith sunk a layup with 14 ticks on the clock. In the meantime, the Crimson rebuilt an eight-point margin off of perfect free throw shooting by sophomore forward Weisner Perez, senior co-captain Siyani Chambers, and freshman guard Bryce Aiken.

Before the Lions put themselves back in a position to contend for the win, Harvard came out of the gates hot. By the first media timeout, the home squad was up 12-4 off of 5-of-6 shooting. The lead would eventually reach 18 and the Crimson shot a blistering 58 percent in the first half. Unlike most games however, most of the shots came off of jumpers inside the three point line, rather than the team’s tendency to thrive beyond the arc. Harvard was missing sophomore Corey Johnson, the team’s best three-point shooter, to an illness on Friday.

A slow start to the second half allowed Columbia to slowly fight back. A foul by freshman forward Chris Lewis put the Lions on the line on their first offensive possession, and by the first media timeout the lead had been cut to 10. The teams traded baskets for much of the middle portion of the half before Harvard began to see its lead dip lower and lower.

“We honed in on the scouting report before this so we knew what was coming,” freshman forward Seth Towns—the game’s leading scorer with 20 points—said. “Fatigue set in, we had a lot of mental lapses. Credit to them, they’re a really good team, but we just let the fight down. That’s what happened, so we can’t let that happen again.”

Amaker chalked some of his team’s struggles up to youth, noting that the young players can sometimes play in a “fog” in the span of a 40-minute game, he relishes in the opportunity to teach through winning rather than battling the emotions of a loss while trying to overcome areas of weakness. Notably, Aiken struggled on Friday night. After scoring 23 and 27 points last weekend against Brown and Yale, respectively, Aiken tallied five turnovers and shot just 3-for-11 from the floor against the Lions.

“[It’s] typical of young players,” Amaker said. “They can be sensational one game or one weekend and they can look like freshman the next game and that’s what we’re dealing with with young players.”

Though they showed their youth at times, Amaker showed faith in his freshman as he started four rookies, with Chambers being the only non-freshman on the floor at tip-off. Chambers finished the game just shy of a double-double with 13 points and eight assists.