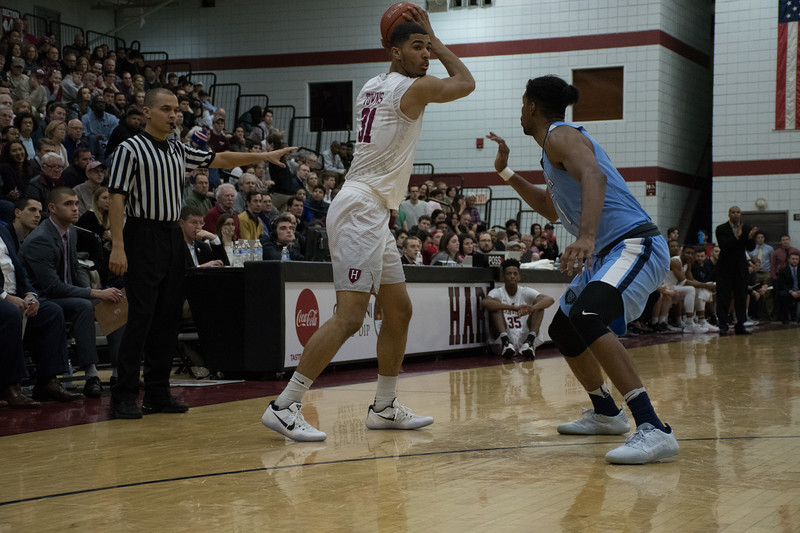 Freshman forward Seth Towns, shown in previous action against Columbia, was the leading scorer for the Crimson for the second night in a row, tallying 21 against the Big Red. By Megan M. Ross
By Troy Boccelli, Crimson Staff Writer

In what was perhaps its most complete game in conference to date, the Harvard men’s basketball team took a large and early lead against a visiting Cornell squad en route to an 87-75 win over the Big Red Saturday night at Lavietes Pavilion.

The Crimson (16-7, 8-2 Ivy), in a matchup largely reminiscent of its one just a night before against Columbia, let a lead as high as 23 drop to 10 late in the second frame. Despite the thinning lead, Harvard held on with strong free throw shooting and some key shots courtesy of freshman Bryce Aiken and classmate Seth Towns, who finished the game with 21 points and six rebounds while Aiken added 17 and three assists.

Cornell (7-18, 3-7), for its part, struggled to create offense, shooting 43 percent from the field and 38 percent from deep while turning over the ball 12 times.

AN EVEN BETTER START

Led by Aiken, who drained two back-to-back threes within a minute early in the half, the Crimson established its lead early on. Harvard connected on four of its first five threes and was up 19 to 8 just over six minutes into the game.

“Today we came out and we started well, the first half we played really well together, the ball was moving, it was contagious,” Aiken said. “We were shooting well, defending really well.”

While the Big Red kept within striking distance early on, the Crimson took off late in the half.

It began with a layup from freshman forward Chris Lewis. Next came a tip-in layup from classmate Justin Bassey. On the ensuing possession co-captain Siyani Chambers found a cutting Bassey for an emphatic dunk. All told, in a span of just over four minutes the Crimson went on a 15-3 run to close the half up 48-28–its second largest first half lead of the season.

The effort wasn’t reserved to offense as Harvard shut down Cornell on the other end. Through the first frame, the Big Red shot 39 percent from the field and 33 percent from deep. Of its 12 turnovers, eight came in the first half alone.

“We played some tremendous stretches of basketball this weekend,” Harvard coach Tommy Amaker said. “I told our guys we were highly disappointed in how we finished yesterday or last night and I thought they came out and really played lights out ball in the first half.”

AN EVEN BETTER FINISH

In its matchup against Columbia the night before, the Crimson allowed a lead as high as 18 points to dissipate into a one point deficit with just over three minutes to play. While Harvard did allow a lead as high as 23 cut to just 10, the finish was without a doubt less of a nailbiter on Saturday night.

With just under two minutes to go Towns took it upon himself to close out the game. He drove in and banked one off the glass to extend the Crimson’s lead to 12 and on the ensuing possession drew a foul and made the basket to put the Crimson up 15 late.

“I just thought that Seth finishing around the rim there with late clock opportunities, Bryce making a few plays there himself,” Amaker said. “Those two guys in particular being really good offensive players and getting fouled. I just thought it was a nice stretch there where we were able to close on a very positive, high note.”

On top of the late offense, the Crimson made the most of its opportunities at the line. Harvard made 20 of its 24 free throws in the second half. On the other end of the floor, the Crimson outrebounded the Big Red 35 to 28 in the game. No single Cornell player tallied more than four rebounds.

“Obviously we have a lot of size,” senior forward Zena Edosomwan said. “I think it’s important when we use that size in the paint, and have that right mentality of just being a force, we can have all the difference.”