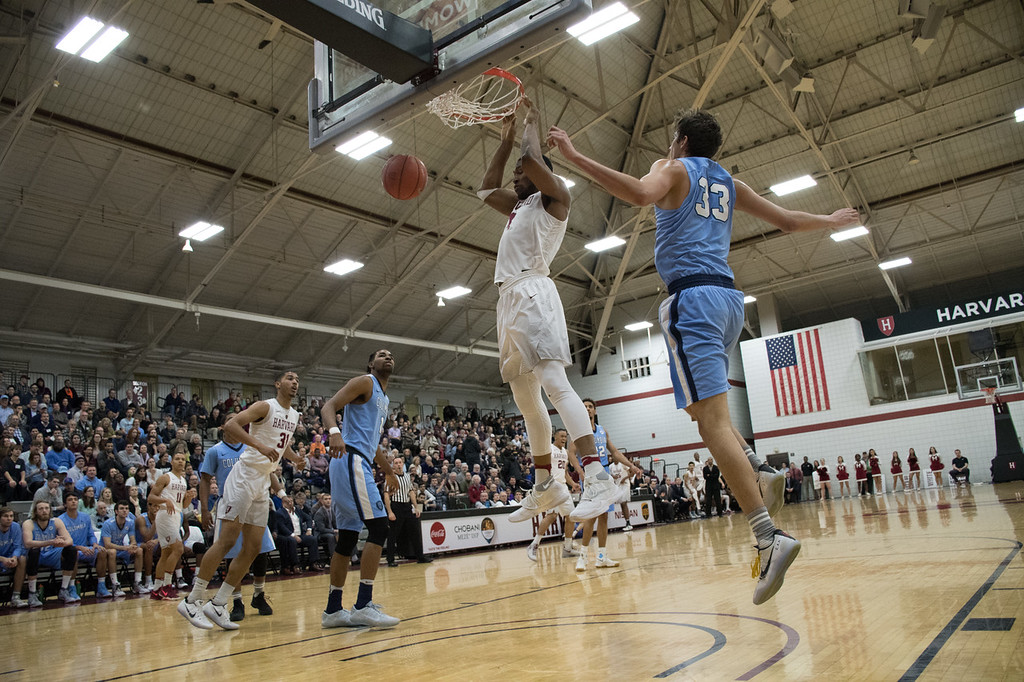 After trailing at halftime in seven of its first eight Ivy League contests, the Harvard men’s basketball team has apparently gotten sick of staging dramatic second half comebacks. Holding a double-digit lead at the break for the second night in a row, the Crimson held on to beat Cornell, 87-75, on Saturday night at Lavietes Pavilion.

Twenty-four hours after Harvard saw a 16-point halftime lead transform into a one-point deficit late in the second half against Columbia, the Crimson (16-7, 8-2 Ivy League) did not let its 20-point intermission edge over the Big Red (7-18, 3-7) shrink to single digits in the second half. Freshmen Seth Towns and Bryce Aiken combined for 38 points as Harvard picked up its second consecutive weekend sweep and became one step closer to securing a berth in the inaugural Ivy League Tournament.

“I thought it was an outstanding team effort,” Harvard coach Tommy Amaker said. “I thought the first half was a tremendous display of being unselfish and great pace and we played a lot of guys, we have to on the second night. I was just very pleased with how we shared the ball for the most part.”

Not to be outdone by the 46 points and 58.1 percent shooting clip it posted in the first half on Friday, the Crimson began the Cornell game by sinking 60 percent of its field goals en route to 48 points before the break. Aiken spearheaded the charge, connecting on his first three three-pointers while senior center Zena Edosomwan, who battled foul trouble on Friday, was perfect on his four field goals before the break.

After jumping out to a 19-8 lead that forced the Big Red to burn a timeout, Harvard saw its lead shrink to three in less than four minutes. After the teams traded baskets, the Crimson made a move that proved to be decisive right before the intermission. Harvard closed the half on a 13-2 run and made a lead that seemed to be settling in the seven-to-nine range reach 20.

The Crimson hit six of its eight shots in the four minutes and 21 seconds before halftime while holding Cornell to 1-for-4 shooting and forcing three Big Red turnovers. Aiken and Towns put an exclamation point on the run as the former hit a jumper with 53 seconds to play before finding his classmate for a deep three with six seconds showing on the clock.

“Everyone was being super unselfish and we were really locked in defensively,” Edosomwan said. “A big staple of us the past couple of years, obviously our number one identity is defense, it was kind of nice to kind of get back to that and I think it was telling and showing in that run.”

The 48 points were the most that Harvard has posted in a first half this season while the 20-point margin going into the locker room was the team’s largest since holding a 22-point halftime lead over Fisher in November. Throughout the season, Amaker has mentioned the high degree to which his team relies on three-pointers. In the first half against Columbia on Friday, Harvard made just two but still found itself up 16. In the first half on Saturday, Amaker may have gotten the balance he was looking for—18 of his team’s 48 points came off of threes, 24 were from twos, and six came via free throws. Seven of the nine players who saw the floor in the first half chipped in a field goal before the break.

“We had stretches where [it was] about as well as we’ve played—last night and tonight—in stretches in the first half,” Amaker said. “It’s been hard for us to sustain that kind of play and teams have been able to work their way back into games against us.”

As has been the story for most of the season, one half looked drastically different from the other. This time around, the fourth quarter of the weekend proved to be a tough one for the Crimson. The second half was not pretty by any stretch of the imagination but the 20-point halftime lead proved to be enough. Cornell rode a 13-1 run after the Harvard lead reached 23, but the deficit would not get back under 10 in the second half.

Pace was a key for the Crimson in the first half, but it struggled to establish the same rhythm after the break. Harvard scored 18 points off of six Big Red turnovers through 20 minutes, but Cornell’s halftime adjustments allowed the visitors to take better shots and get to the free throw line with greater frequency as the game wore on.

“We like to run,” Aiken said. “We like to get out, run, score, that’s definitely a strong part of our game. It’s important to get those rebounds, get out and run. That definitely plays to our advantage and we like doing it.”

The Big Red got to the charity stripe 20 times on the evening, with 16 of the attempts coming after intermission, and made every one of its free throws. Cornell also shot 48 percent from the field in the second half and hit five three-pointers.

“Definitely want to improve on playing a full 40 minutes,” Aiken said. “There’s times throughout the game where we feel like we’re a tremendous team, a force to be reckoned with, and then there’s times where we slack and I think that’s what we have to work on. As soon as we put that 40 minutes together I think that we’ll be in good condition.”

The large discrepancy between halves is nothing new for this year’s Crimson team. All but two of Harvard’s 23 games this season have featured a double-digit lead by at least one of the two teams. The Crimson has not won both halves of a game since beating Dartmouth on Jan. 7.