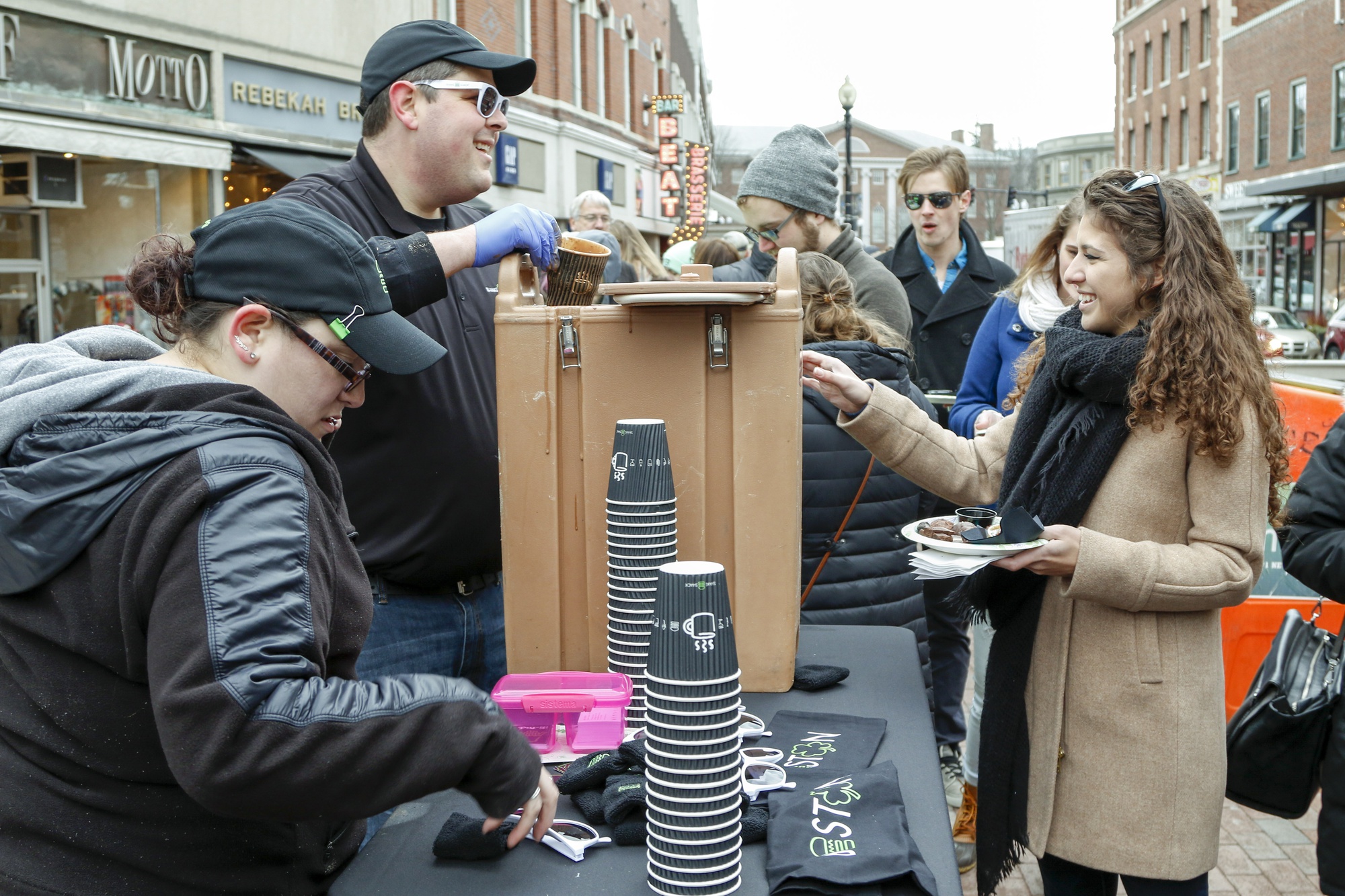 There's only one rule, but it's strict: no plate, no chocolate.
By Tarpley Hitt

Mid-morning on a steely grey Saturday, a long line begins to form in the middle of Brattle Square. Three young women in knit caps and nametags stand at the head of the line, protected by a folding card table piled high with plates. The line curves along Brattle Street into Massachusetts Ave. all the way down to C’est Bon. It circles around the Church Street T-entrance and then doubles up, heading back towards Brattle. Line-waiters fidget in the cold, adjusting their winter gear, shushing their kids, and checking the time.

Today is the second day of the “Legendary Ninth Annual Harvard Square Chocolate Festival,” a weekend event held by the Harvard Square Business Association to promote sweet stuff and local business. In minutes, the knit-capped women will open entry to the festival’s pièce de resistance––a free tasting of chocolate sweets from 20 nearby eateries.

The tastings will be highly structured: On the hour, the knit-capped ladies will start passing out plates to the first in line. The plated few will file into the closed-off tasting area and load up on free chocolate cannolis, chocolate truffles, chocolate ice cream, and at least seventeen other desserts both free and chocolate. They’ll leave the area, and then more plates will be passed out. You must have a plate to play. There’s only one rule, but it’s strict: No plate, no chocolate.

When asked why she braved the cold, Karen Soate, a straw-haired woman with a dog of similar coloring, standing at the very end of the 1000-person line, says simply “It’s free, it’s chocolate.” Chocolate-lovers seem to see their affection as self-evident –– everyone answers my question like this, as if complimentary chocolate were a concept too fundamental to be further explained.

They may have a point –– the very same argument was used to found the festival nine years prior. Denise Jillson, executive director of the Harvard Square Business Association, says the festival was born out of foot traffic–– or rather, a lack of it.

“Nine years ago, business owners noticed that in December-January-February people don’t walk around the Square as much,” Jillson says. “They wanted an occasion to bring people back out into the community.”

The Association might have held any number of community events –– a carnival or a winter market or a book fair –– but instead they chose chocolate.

“Because everyone loves chocolate!” Jillson explains.

As the opening hour approaches and more people join the overcrowded line, it becomes clear the effort has succeeded. But for those who aren’t fans of the crowd, the line, or the crescendoing drumline of Boston’s Grooversity percussionists, there are quieter ways to participate in the festivities.

The most subtle event on the schedule can be found across the Yard at the Harvard Museum of Natural History. Their featured exhibit, “Glass Flowers: The Ware Collection of Blaschka Glass Models of Plants”, includes among its 4,000 models a single glass replica of the Cacao plant. The small pod can be found near the rear of the display room, between the models of two leafy reeds.

Other crowd-averse chocolate connoisseurs might try the parking garage tucked under the Smith Center. The Propark Garage attendant keeps a small beige bowl of peppermint patties to pass out to drivers. He seems to be enjoying success –– when we speak, only two silver patties remain in the bowl.

Back above ground, the digital clock strikes one, and a thousand flushed chocolate lovers all file forward, piling sweets onto their plates.