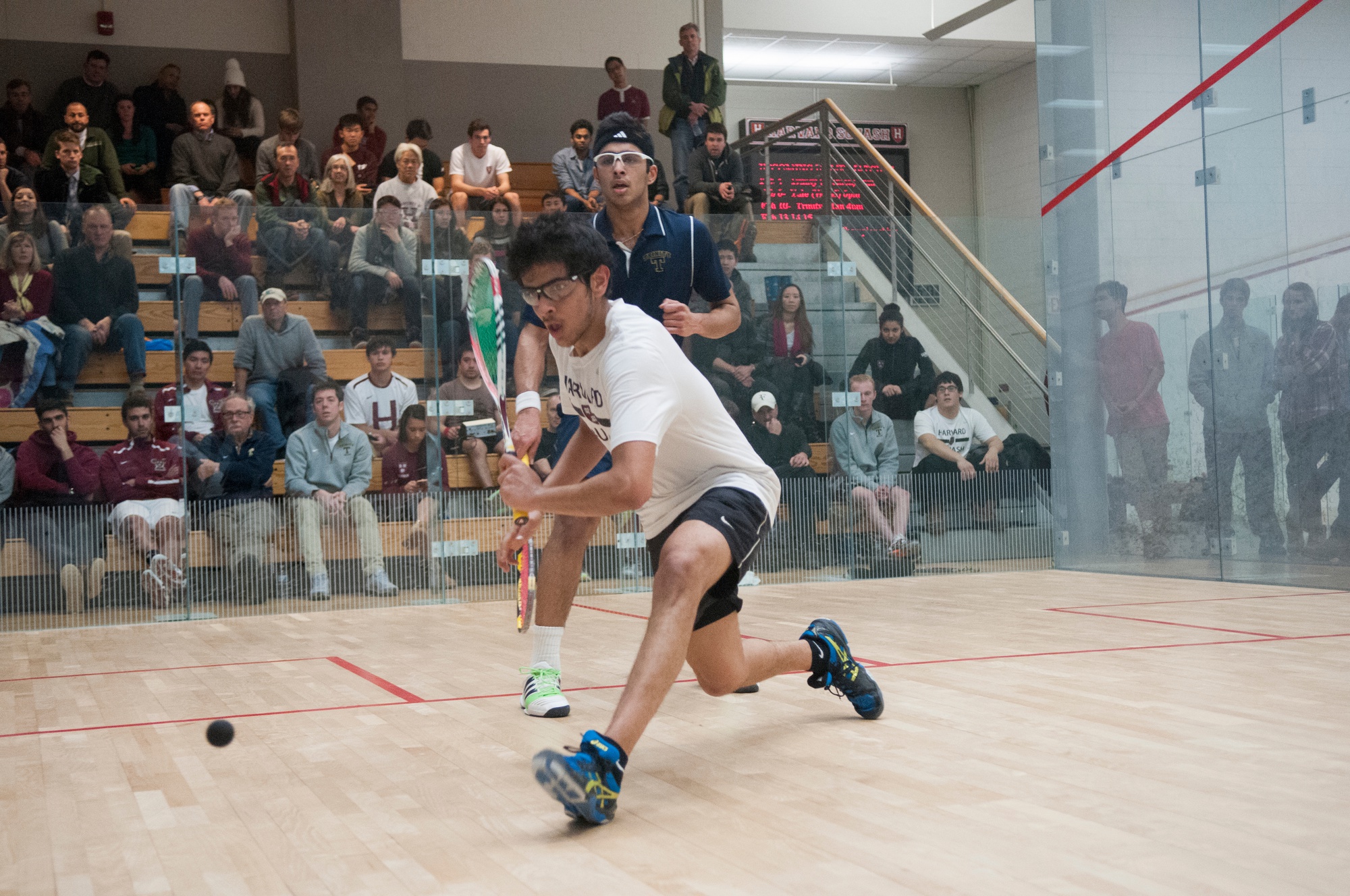 After facing a 7-2 loss to No. 1 Trinity earlier in the season, Harvard got another crack at their opponent in the National Championship match Sunday. The Crimson would ultimately fall 5-4.
By Jackson M. Reynolds, Crimson Staff Writer

The crowd packed into the Murr Center on Sunday stood in anticipation. The No. 2 Harvard men’s squash team was looking to claw its way out of a 4-2 hole to victory against No. 1 Trinity in the CSA Men’s National Team Championship finals. The feat seemed increasingly possible with each passing second. But those hopes and dreams faded in an instant.

Freshman Saadeldin Abouaish began the Crimson’s rally, besting Trinity freshman Kush Kumar in three games at the first position. It was now up to freshman Timmy Brownell and co-captain Bryan Koh to finish off the upset.

Down 2-1 in games, Brownell stared down championship point against Bantam sophomore Michael Craig. With the game score at 10-6, the rookie couldn’t slip up. Conservative play and dogged determination proved to be a recipe for success, as Brownell fought tooth and nail to get within one point of tying up the match, 10-9.

Long rallies persisted. Without any regard for his body, the Belmont, Mass. native dove prone in all four corners of the court to secure balls on increasingly well placed shots from Craig. But after three let calls to extent the play on the fourth match point for his opponent, Brownell finally buckled.

With the victory secured, a raucous group of Trinity players gleefully stormed the court and hoisted Craig in the air in celebration of the Bantams’ 16th national title in the past 20 years. During the commotion, Koh did his part in claiming his own five-set victory, but the achievement proved to be inconsequential in terms of the final result. Harvard (13-2, 7-0 Ivy League) went home empty handed in its loss, 5-4.

“While the final result [in Sunday’s match] was disappointing, our guys played some real tough squash,” freshman Sean Hughes said. “I think everyone really left all they had out on the court and you can't ask for much more than that.”

On its route to the finals against Trinity (19-1, 6-0 NESCAC), the Crimson bested No. 3 Columbia (12-4, 6-1 Ivy) and No. 7 Yale (8-9, 5-2 Ivy) in matches that were dissimilar to their regular season counterparts. As the group reflects on this year’s campaign, it hopes to further build upon the strong team dynamic that led to its performances.

“On the season as a whole, as a freshman, I was really happy to be part of such a welcoming team,” Hughes said. “The culture on the team is outstanding and everyone pushes each other on and off the field. We had a lot of great performances this year and I'm looking forward to big things in the next three.”

Harvard couldn’t topple the titan. In a match that closely mirrored the contest between the bitter foes just two weeks ago, victory was just out of reach for the Crimson.

Hughes and co-captain Devin McLaughlin again pushed their squad out to an early lead. Feeding off the cheers of the crowd, McLaughlin fought through an early letdown to construct a four-set win. Hughes, on the other hand, cruised to victory. The rookie made himself known in the second set, as his superior frontcourt game aided him in craftily dictating play and rendering his opponent helpless.

In the next three matches on court, Harvard failed to claim a single victory. Afterwards, Abouaish, Brownell, and Koh set the ultimate score in the final wave of matches.

Senior Dylan Murray, and junior David Ryan, fought side by side in grueling back and forth matches. With each successive point, the tension mounted. Ultimately, both players fell in identical fashion, 3-1, albeit through vastly different styles of play. Junior Bradley Smith lost more routinely to Trinity junior Rick Penders, 11-7, 11-7, 11-3.

In spite of the loss, the Crimson secured its best result in the season since its undefeated 2013-2014 campaign.

“Obviously not the result that we wanted yesterday, but I'm extremely proud of the team and the way they've carried themselves all year,” Koh said. “The seniors have made an incredible impact on this team and we know the younger guys will use this weekend as motivation to come back stronger next year.”

In its semifinal match against Harvard, the Lions proved to be a tougher test than they had been earlier in the season. As is emphasized by the performance of their best player, junior Osama Khalifa, Columbia played with more grit on the national stage.

Dhingra, Brownell, Hughes and McLaughlin continued to extend their solid regular season play into the tournament. Each player triumphed decisively over his opponent. Replacing Murray in the lineup, sophomore Alexi Gosset claimed a crucial victory 8-11, 11-9, 2-11, 11-5, 11-4 at the ninth position, helping propel the Crimson into the finals.

Later on, Abouaish, Koh, and Ryan all lost in contested five-game matches at the first, seventh, and fourth positions, respectively. Abouaish and Ryan set out to early leads, only to see them slip away, while Koh nearly pulled off an upset after losing the first two games of his match. At position one, Khalifa refused to fold like he had in his last matchup with Abouaish, as he emphatically disarmed the rookie in the fifth game, 11-0.

After last Sunday’s closer than expected 5-4 bout, the seventh seeded Bulldogs came in with a realistic hope of upending Harvard. But with Ryan back in the line-up at the fifth position this time around, the Crimson cruised to an easy victory in the quarterfinal matchup.