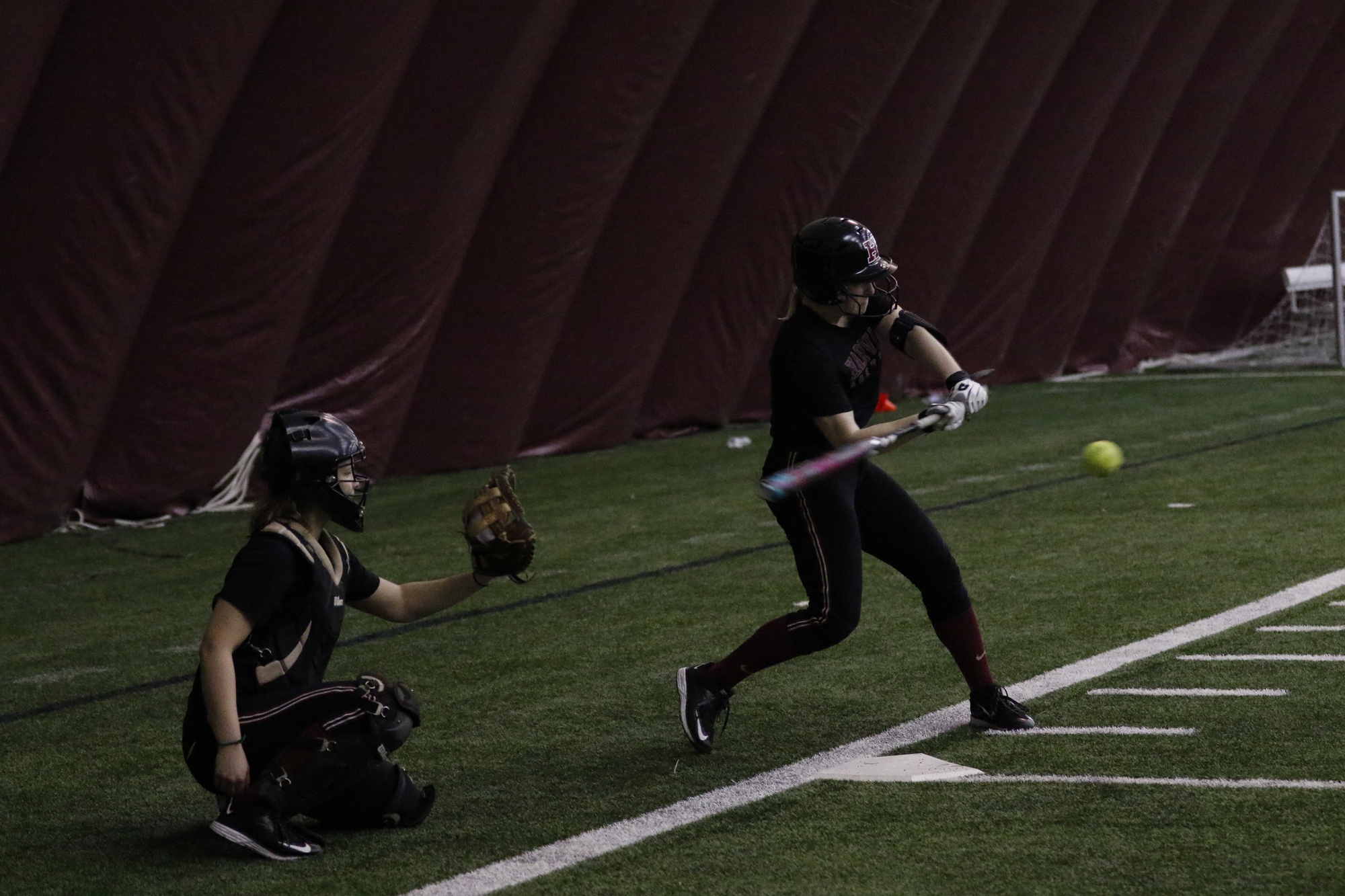 For many weeks, the softball team has practiced in Harvard stadium beneath an inflatable dome. By Timothy R. O'Meara
By Jack Stockless, Crimson Staff Writer

The Harvard softball team enters 2017 with a chip on its shoulder after coming within one game of winning an Ivy League championship and advancing to the NCAA Regional tournament in 2016.

A season ago, the Crimson got off to an uneven start, at one point losing five games in a row between the Loyola Marymount Tournament and the San Diego State Classic.

However, the team regrouped after the tournaments, rattling off two separate winning streaks of eight games to finish the season 29-17. Harvard also went 16-4 in Ivy League play, good for the best record in the conference.

This barrage of wins set up a best-of-three showdown between the Crimson and the Princeton Tigers in the Ivy League Championship Series. Princeton prevailed in three games on Harvard’s home turf, however, sending the Tigers to the NCAA Regionals and putting an abrupt end to the Crimson’s season.

Harvard has won six Ivy titles since the league’s inception in 1980. This mark is second only to Princeton, which added its 17th title after its triumph over Harvard last year.

“Our goal all the time is to win an Ivy championship,” co-captain Savannah Bradley said. “We’ve been working toward that these past few years, and we got the closest that we have been in a while last year.”

The Crimson did lose several key pieces to graduation after its Ivy League championship bid, but improvement from returning players coupled with contributions from incoming freshmen should put Harvard back in contention for another title this season.

The Crimson likely will continue to be an offensive force in the Ivy League in 2017. The team returns many of its top contributors this season, with the only significant losses being 2016 co-captain and outfielder Zoe Galindo and utility infielder Haley Davis.

Junior Maddy Kaplan and sophomores Rhianna Rich and Meagan Lantz will once again be counted on to do damage at the plate.

Kaplan seemed to be on base all the time last season, raking her way to a .472 average and a 1.163 OPS. The Santa Monica, Calif. native anchored the offense, playing both left field and designated hitter.

Rich, the starting shortstop, contributed a .381 average to go along with a .971 OPS out of the leadoff spot in 2016. She essentially took the reigns from the outset of the season, playing a full slate of 46 games.

Lantz provided much of Harvard’s power, leading the team with seven home runs and 37 RBI, the second-most runs batted in among all Ivy League players. Lantz also swiped 10 bases and played solid defense at the hot corner.

The incoming freshman class can produce all over the diamond and will be depended on to fill any gaps in production both offensively and defensively.

Last season, Allard opted for a rotation with two main starters and a mix of bullpen arms who could also stand in and make spot starts as necessary. This year, the rotation may take a different form after the departure of 2016 co-captain Morgan Groom.

“That’s kind of what worked last year,” Allard said. “This year we might have four starters. As we head into the conference, we’re going to play the same team some weekends four times, so we’ll have to see where people are, where their development is, and where they’re effective.”

Last season, Groom pitched to a 10-4 record with a sterling 2.30 ERA, second-best in the Ancient Eight. She also recorded 95 strikeouts.

Returning this year will be Groom’s 2016 counterpart, senior Taylor Cabe. The Boiling Springs, S.C. native contributed 15 wins, second-most among Ivy pitchers, to go along with a 3.12 ERA. She starts the 2017 season as the presumptive ace of the staff.

Behind Cabe, there are some question marks. Allard has a mix of sophomore and freshmen pitchers who will slot in behind Cabe both to start games and come out of the bullpen.

“All of our pitchers tend to throw a lot of innings,” Bradley said. “Obviously we’ll see the leadership from our senior pitcher, Taylor, but we’re also looking to use the depth that we have in our pitching staff.”

Sophomores Sarah Smith, Katie Duncan, and Nicki Nishizawa all will have to make up for the 103.1 innings tossed by Groom the previous year. Smith and Duncan both pitched in key spots in the late innings and in spot starts last season.

“Last year Sarah Smith was so very effective for us as a closer… but this year she’s really worked hard to be a strong starter, so she’s going to be somebody that can play both roles,” Allard said.

Along with Cabe and the trio of sophomores, freshmen Olivia Giaquinto and Alissa Hiener will spend some time in the circle.

Though the Crimson has retained much of its core from last year, it will still have to contend with a fairly deep Ivy League. Alongside Harvard, Dartmouth and Princeton stand atop the league.

All eight Ivy teams have to deal with difficult competition at the weekend tournaments early on in the season, but relative to other Northeast teams, the Ivy League is competitive. The only clear-cut bottom feeder team in 2016 was Cornell, which tallied only three wins in 20 league games.

Allard cautions against counting out any Ancient Eight squads, however. The 23-year veteran skipper remarks that on any given day the Crimson has to be prepared for a tough contest due to the relative parity in the conference.

“We think every team in the Ivy League is a tough competitor, so we’re always bringing our A-game no matter who’s on the other side of the field,” said Bradley, echoing her coach’s sentiments.

Two other factors complicating Ivy League play are other teams’ familiarity with Harvard’s breakout stars of 2016 and a new crop of talent throughout the league.

One of the league’s dominant offensive forces, Dartmouth shortstop Katie McEachern, has graduated, much to the relief of Ivy League pitchers. McEachern topped the league in home runs in 2016 with 12, and she also hit .442 with a 1.380 OPS.

However Penn’s Alexis Sargent, arguably the league’s top pitcher in 2016, returns in 2017 for her senior year. Sargent paced the Ivy League with a 2.29 ERA and 124 punch-outs, holding opposing hitters to a meager .237 batting average.