No. 5 Men's Hockey Gets Revenge Against Dartmouth in Final Beanpot Tune-Up 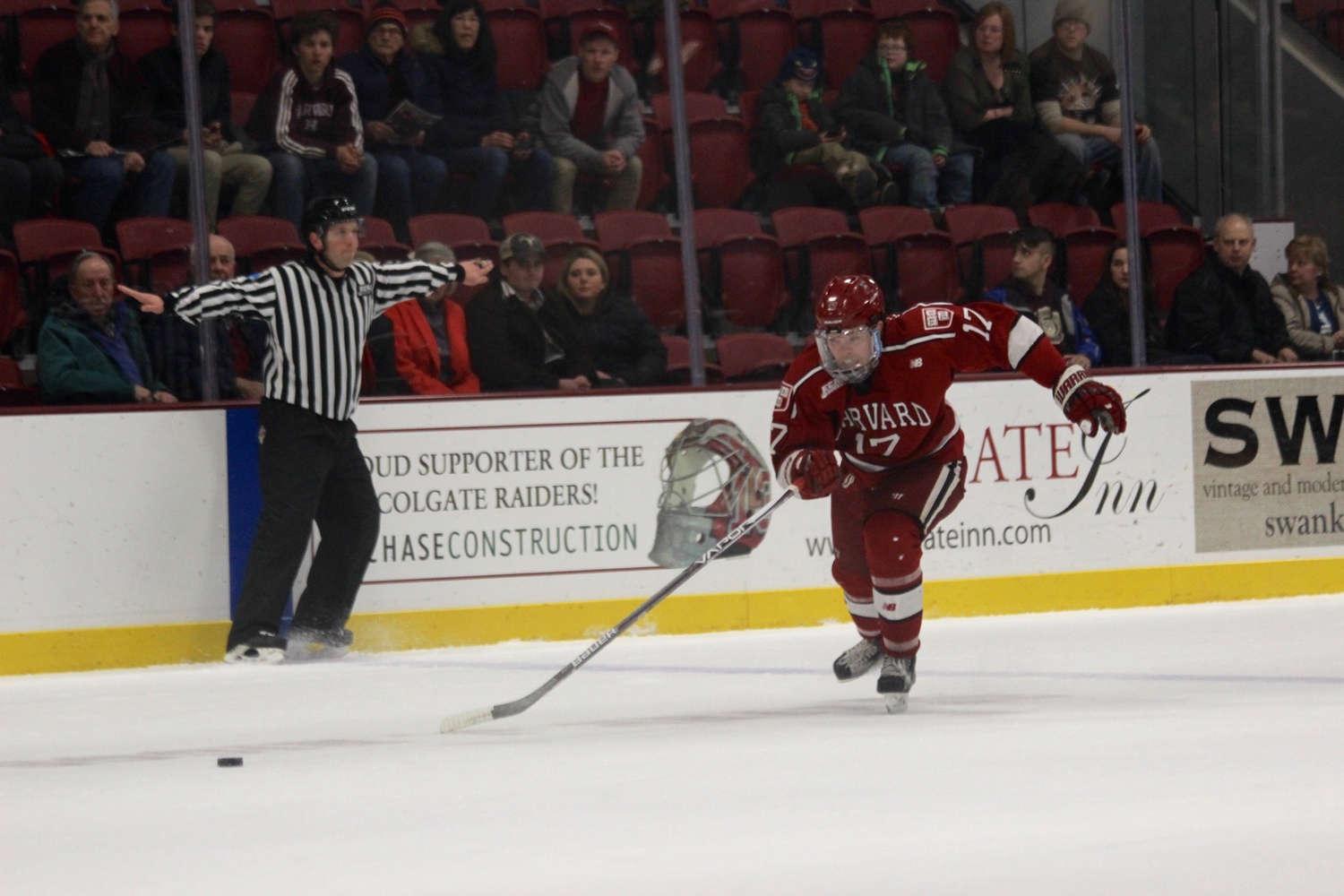 After scoring on this breakaway against Colgate his last time out, senior Sean Malone lit the lamp again on Friday—this time twice—in a 5-2 win over Dartmouth. By Thomas W. Franck
By Jake Meagher, Crimson Staff Writer

Monday night, the No. 5/6 Harvard men’s hockey team will look to advance to its first Beanpot championship game in nine years—a necessary step in the quest to win back the highly coveted trophy that’s eluded the Crimson since 1993.

Harvard’s contest just three days prior against Dartmouth, a team in the bottom half of both the ECAC and Ivy League standings, didn’t exactly have the same ring to it.

Given the circumstances, a shortage of focus from Harvard throughout its Beanpot antecedent Friday night really wouldn’t have been all that surprising. However, after the Big Green’s 8-4 drubbing of the Crimson last month, Harvard coach Ted Donato ’91 made it clear that Dartmouth had his team’s attention.

Sure enough, the rematch bore little resemblance to the Crimson’s nightmare in Hanover, N.H. Behind a three-point effort from senior Sean Malone and 28 saves from junior goaltender Merrick Madsen, the Crimson earned its revenge in the form of a 5-2 victory over the Big Green at the Bright-Landry Hockey Center.

“When we played them in our building, I think we caught them early,” Dartmouth coach Bob Gaudet said. “We were very opportunistic and put some pucks behind them, and when we got up, it was a much different game. We were able to slow them down. But not tonight.” 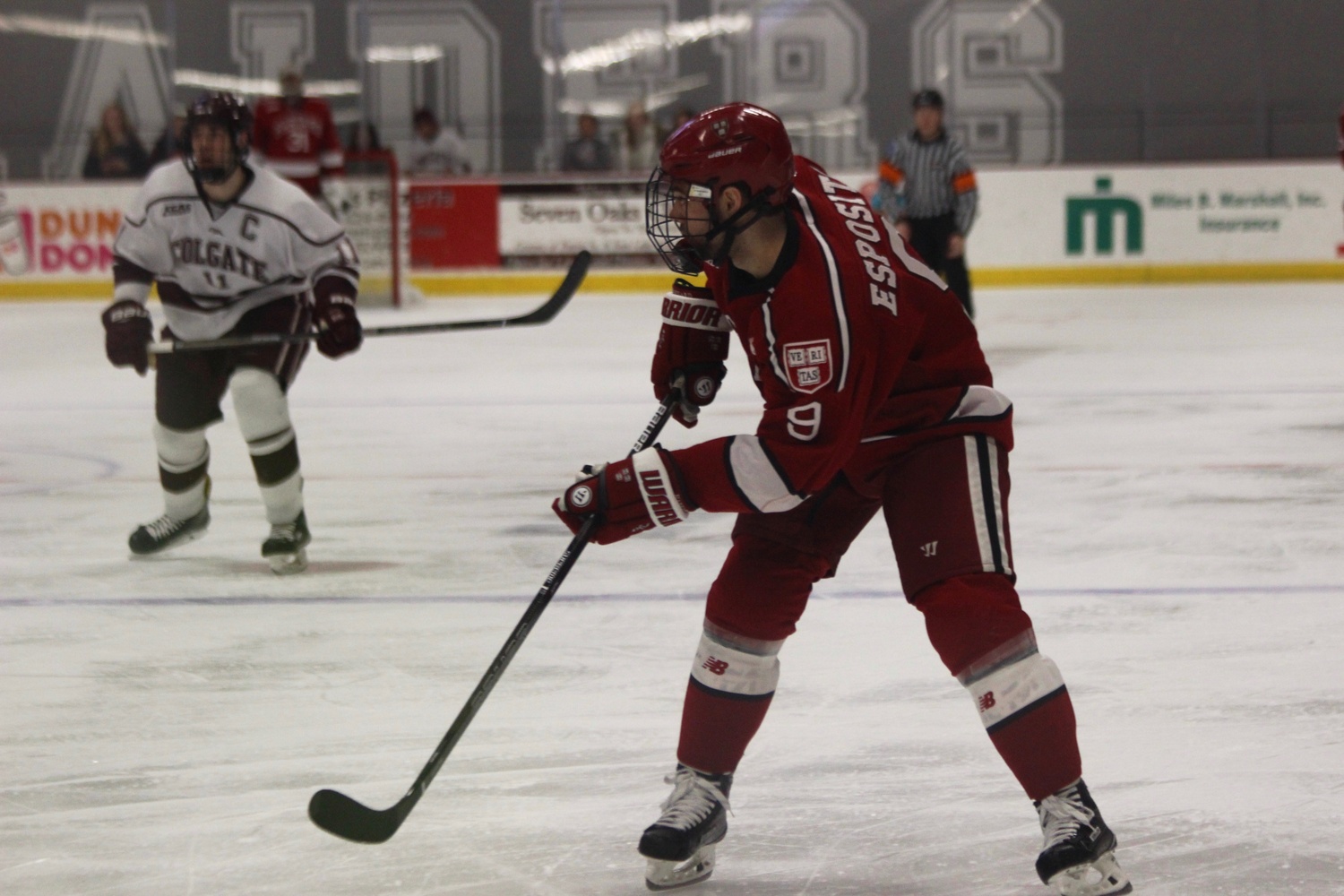 Senior Luke Esposito, shown in action last weekend against Colgate, was named the game's second star on Friday after grabbing a goal and an assist against the Big Green. By Thomas W. Franck

Taking advantage of its speed, Harvard (15-5-2, 11-4-2 ECAC) scored five goals for the first time in eight games after having accomplished the same feat nine times in its first 14 outings. The Crimson now has won three straight games, the latest of which temporarily pushes Harvard into second place ahead of Union in the ECAC.

Back centering the Crimson’s second line as a result of Donato’s latest line shuffling, Malone led the charge with a goal in the first period and another in the third, helping Harvard open up a 3-0 lead. Unlike in Hanover when the Crimson saw a 2-0 lead evaporate rather quickly, Harvard then buckled down to protect its advantage.

Nonetheless, the Big Green (8-12-3, 5-9-2) couldn’t leave Cambridge without making things interesting. With 12:13 remaining in the third and the Crimson leading 4-1, Harvard junior Jake Horton received a major penalty and a game misconduct for hitting Dartmouth’s Clay Han from behind, leaving the hosts shorthanded for five minutes. And it was only a matter of seconds before the visitors pounced.

But that opportunity never came to fruition, as the referees also sent Warpecha to the box for embellishment—the first in a series of bad breaks for the Big Green that transpired over its final three-plus minutes on the man advantage.

Dartmouth’s next bit of ill fortune came after an ordinary zone entry produced a favorable carom off the end boards that left junior Kevin Neiley staring at an open Harvard net. Before the fourth-liner could pull the Big Green within one, freshman defenseman John Marino lunged in with his stick to make one of the biggest stops of the night.

“It sucks when you get a five-minute major like that in the third period, but little things like blocked shots and clears can get your bench going again,” Malone said. 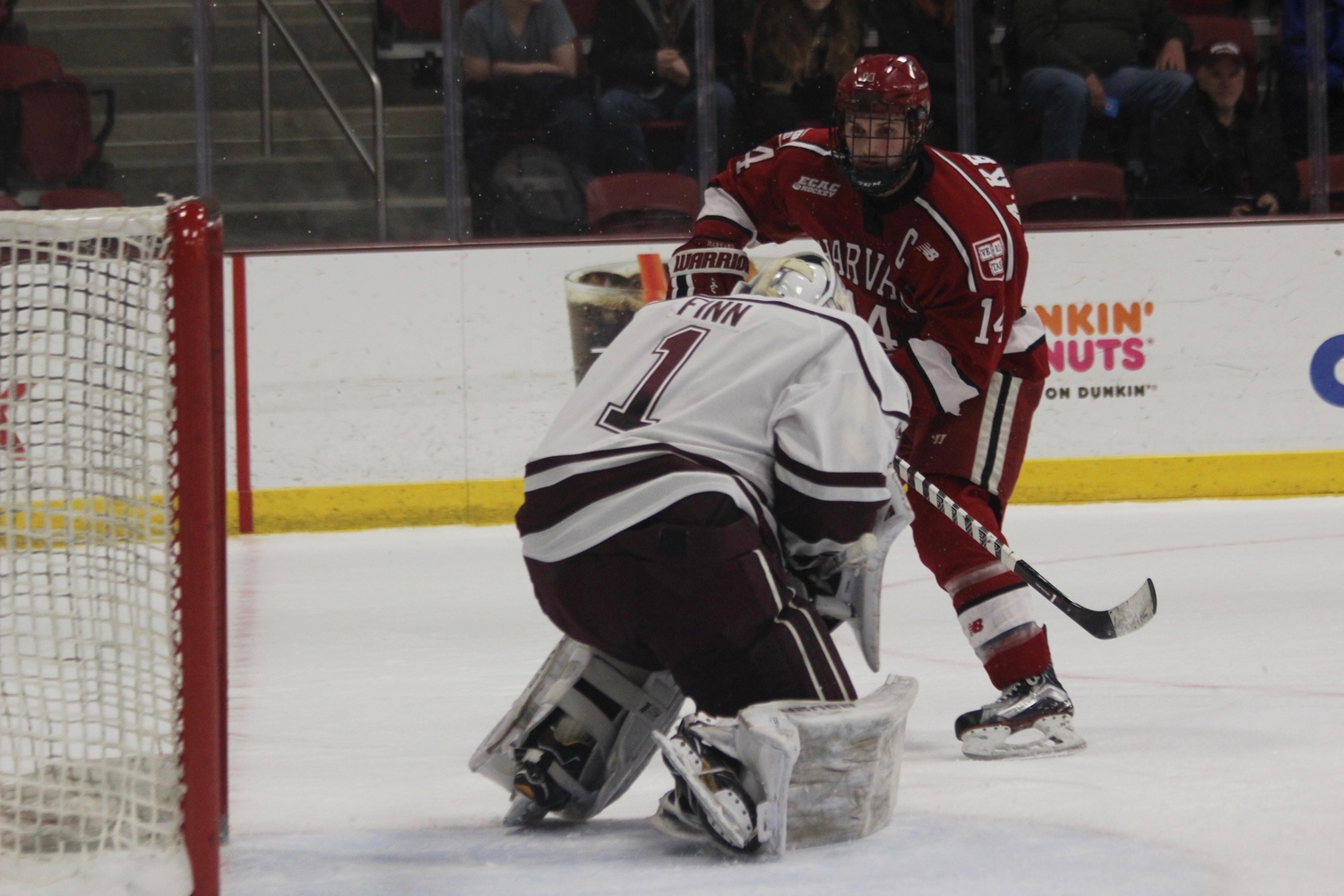 Co-captain Alexander Kerfoot, shown in action against Colgate last weekend, struck on a 2-on-1 from this same sort of range Friday night against Devin Buffalo. By Thomas W. Franck

In the wake of Marino’s blocked shot and two Madsen saves later, co-captain Alexander Kerfoot broke out on a 2-on-1 with sophomore Ryan Donato as the penalty expired. Kerfoot opted to shoot, and the co-captain consequently put the Crimson’s fifth puck past Devin Buffalo with 7:06 remaining.

Buffalo did make 34 saves on the night, but the junior goaltender was beat at least once in every period. Malone broke open the scoring at 11:36 in the first after senior defenseman Clay Anderson made one of his better plays of the season, generating a steal in the attacking zone and setting up the Sabres draft pick perfectly in the slot.

Horton doubled the lead down low 8:06 into the second, capitalizing on a pair of wacky bounces—one off the stick of Buffalo and another off the stick of Luke Esposito—to punch in his third goal in as many games.

Malone kept at it in the third, scoring from his knees after being tripped up by Tim Shoup in the slot at 1:39. That goal put Harvard up 3-0, and his point drive that was tipped in by Esposito six minutes later upped the Crimson's edge to 4-1.

The two seniors were back together on the second line Friday for the first time in three games, as Ted Donato opted to revert back to the lines that he'd been rolling out all season up until the Dartmouth debacle.

“You can see some chemistry with those guys,” Ted Donato said. “When we get [our top two] lines going and the other two lines working like they were… it’s really the type of teamwork we need to win.”

The lines did feature some moderations since Donato revealed that junior Seb Lloyd and freshmen Nathan Krusko and Frederic Gregoire all went down with injuries in practice this week. But the retreat to the structure of old seems to suggest that Harvard might take a similar approach with its lineup against Northeastern when the Beanpot kicks off on Monday.

The wait is on. 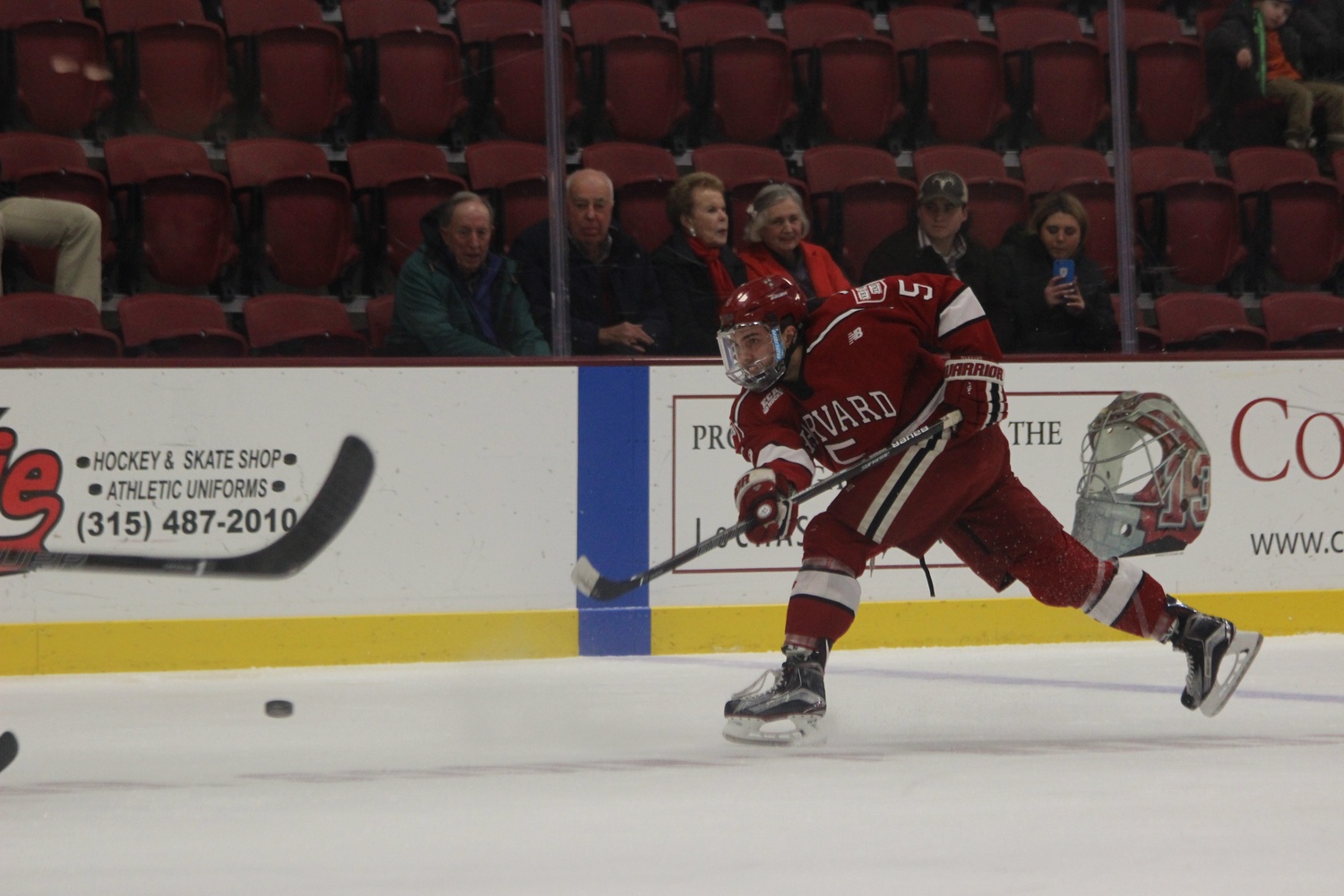 Senior defenseman Clay Anderson, pictured shooting against Colgate last weekend, made an impressive pass to Sean Malone in the slot midway through the first period against Dartmouth that helped open up the scoring for Harvard. By Thomas W. Franck

—Harvard has jumped two spots to sixth in the PairWise rankings.

—Out of the three players who were injured in practice this week, Ted Donato said two would likely be out past Monday while one would have a chance to be available against Northeastern. The coach did not specify which timetables applied to which players, but Nathan Krusko was initially included in the Crimson's lineup on Friday (before being lifted in favor of extra skater Eddie Ellis), suggesting that Krusko is most likely the one who has a chance to suit up for the Beanpot's opening round.

—Despite generating as many as 14 shots on the power play, Harvard finished 0-for-5 on the man advantage. Now just 1-for-13 over its last four games, the Crimson has dropped to third in the country behind Ohio State and Northeastern in power-play efficiency (26.3 percent).

—Freshman defenseman Adam Fox came away with his first two-point night in nine games by way of two secondary assists against the Big Green. Fox had accumulated six multi-point outings in his first 12 collegiate games. Among defensemen, he leads the nation in both points per game and assists per game.

—Sean Malone, a Buffalo Sabres prospect and more importantly a product of West Senaca, N.Y., 'shockingly' will not be rooting for the New England Patriots in the Super Bowl on Sunday, he revealed after the game.