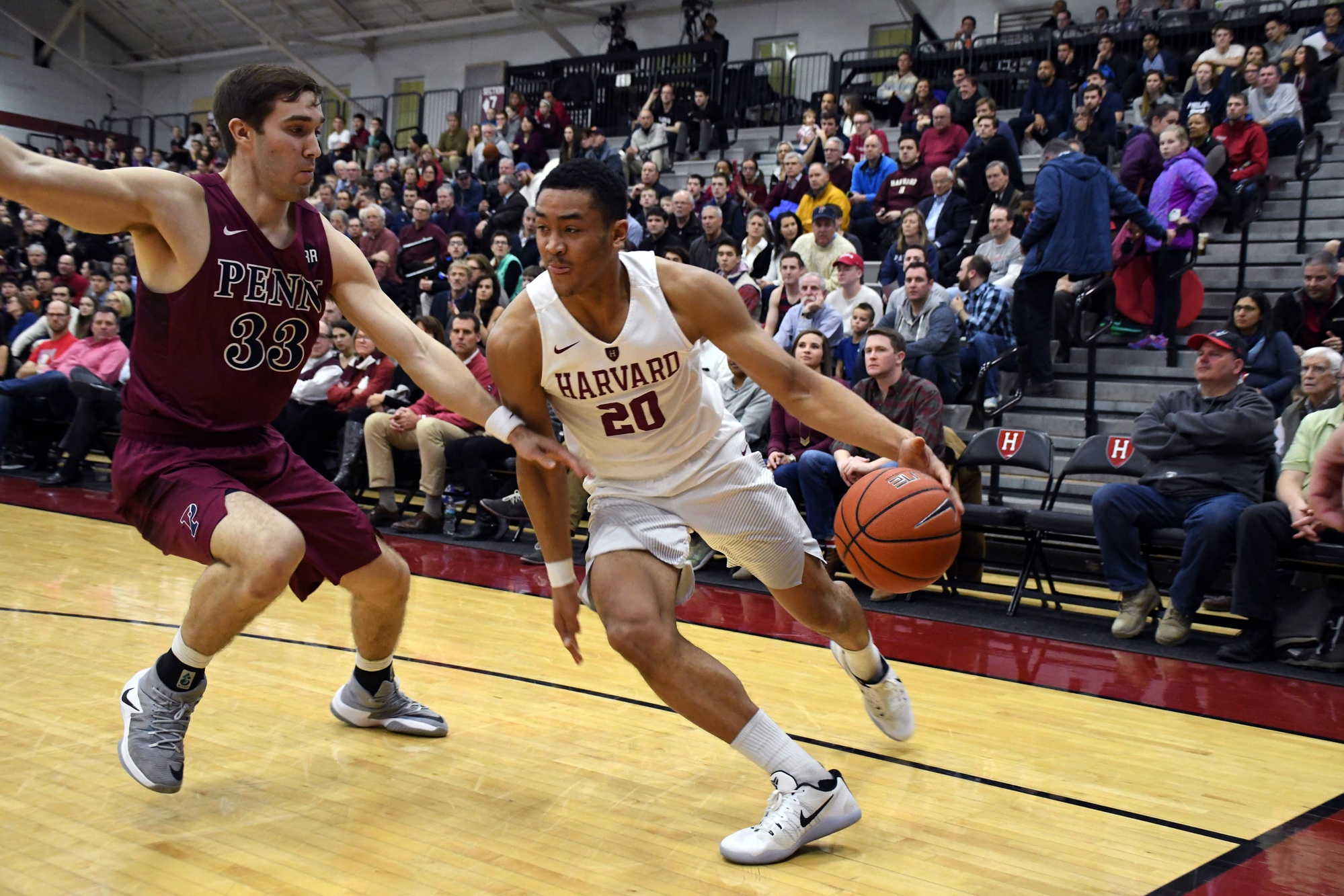 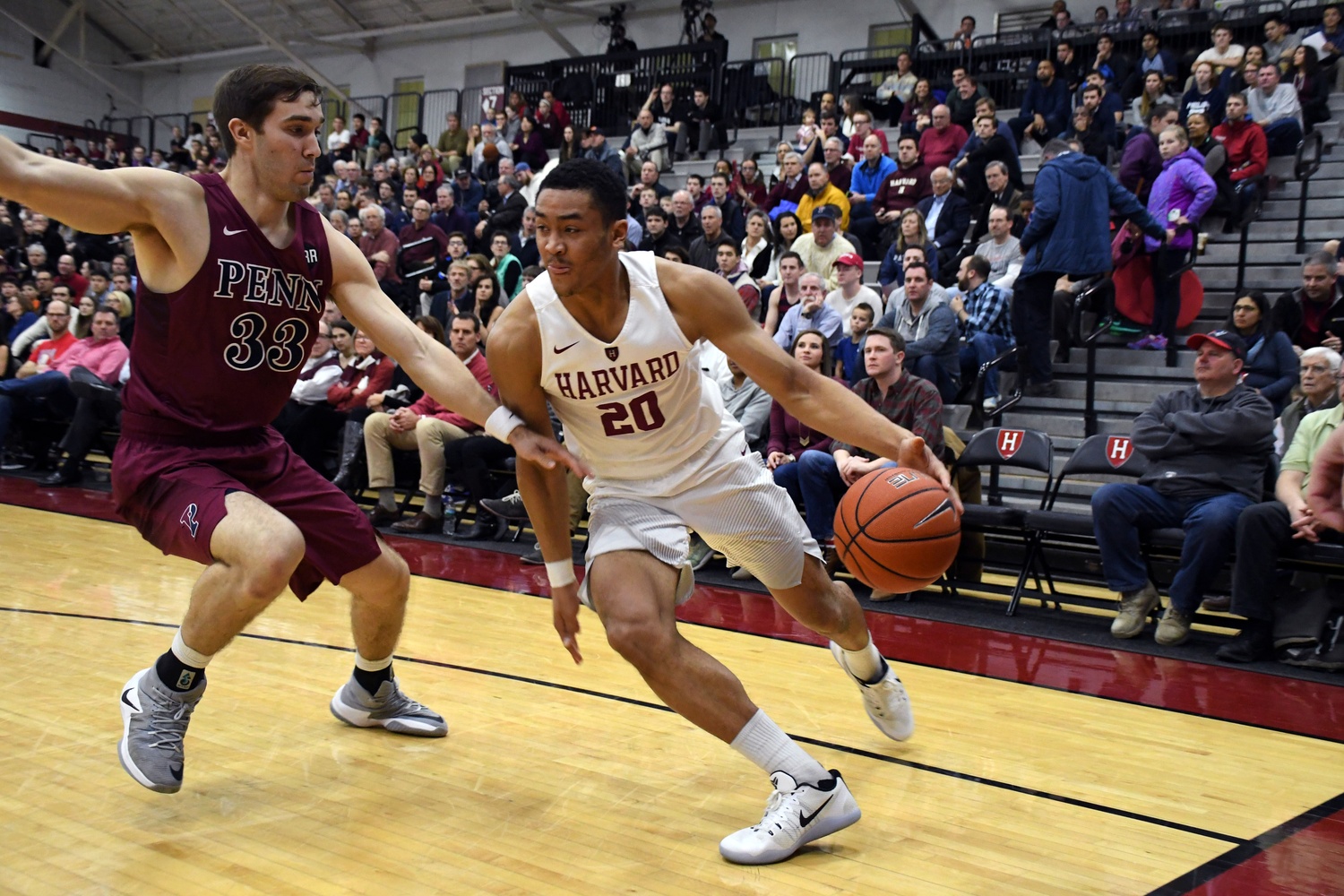 Freshman wing Justin Bassey had 10 points and six rebounds in the Crimson's 69-59 win over Penn. By Megan M. Ross

“Another night in the Ivy League,” head coach Tommy Amaker said. “It never ceases to amaze me how our league, how the games can be in league play and how hard it is, challenging.”

Despite facing off against a Penn team that entered Friday’s contest without a conference win, the Quakers (7-10, 0-4 Ivy League) would force Harvard (12-6, 4-1) to play a full 40 minutes of basketball at Lavietes Pavilion.

For the Crimson, though, it ultimately came down to overcoming another difficult start and locking down on defense late. In a game that saw seven lead changes, Harvard’s play down the stretch and timely free throw shooting gave the Crimson the lead it would need to take down the Penn, 69-59.

Just over five minutes into the first half one thing was clear—Penn had come to play. For the third game in a row, Harvard saw itself down early and by a significant margin. Through these five minutes, the Crimson only scored twice and turned the ball over as many times. For their part, the Quakers had only missed one shot and had taken a dominant 17-4 lead.

“I don’t remember them missing a shot at the beginning of the game so that was great for them but we didn’t really lock in on defense like we said we were going to,” sophomore guard Corey Johnson said. “We didn’t rotate well, we weren’t rebounding.”

Coming off games against Cornell and Columbia where Harvard entered the half down by seven and fifteen at the half, respectively, Friday’s game looked like it was shaping up to be another late comeback from the Crimson.

This time around, however, Harvard didn’t wait until the second half to respond.

After starting the half 2-of-11 from the field, the Crimson rallied late to take a lead with just under three minutes left in the clock. For a Harvard, it was ultimately late defense that came through to turn a deficit as high as 15 into a three point lead with just over two minutes on the clock. The Crimson forced 10 turnovers on four steals to crawl back into the game late in the first half.

After going down 19-4 the Crimson would string together a 30-12 run to end the frame. Despite the tough early shooting, Harvard ended the half shooting 47 percent from the field.

“Things picked up a little bit once we saw the ball go in the basket a few times,” Amaker said. “We put ourselves back into it, or least we felt like we were settled having made a few baskets.”

Coach Amaker has stressed the depth of his team and his bench throughout the season. Friday night’s game was no exception to the rule. On the game, 11 players saw the floor and five of the Crimson’s players were in double digits. Lead by senior guard Siyani Chambers, who finished with 13 points, 6 assists, and four steals, the Crimson stayed composed late despite the early deficit.

“I just thought that [defense] was the key there,” Amaker said. “That has been our calling card since we’ve been here in this program and to hold that team in the second half with that shooting percentage...We’ve experienced that ourselves before, particularly on the road.”

While Harvard relied on its depth, Penn was looking to freshman forward AJ Brodeur much like it has throughout the season. The rookie came in averaging over 15 points and nearly seven rebounds per game. On Friday, however, the Crimson found a way to keep Brodeur at bay.

Defended mostly by senior forward Zena Edosomwan and freshman Chris Lewis, Brodeur was held to seven points and five rebounds on 3-of-10 shooting from the field. He would also turn the ball over six times.

Ultimately, the win came down to defense. While the Harvard shot only 36 percent through the second frame, they held the Quakers to a tough 21 percent clip through the same frame. In the last 20 minutes of play, Penn would go 1-for-14 from beyond the arc.

“I think we just picked up our defensive intensity,” freshman guard Justin Bassey said. “We started picking up further up the court and a lot of that starts with Siyani for us. Having him pressure the ball and making it hard for them to bring it all the way up and initiate their offense.”