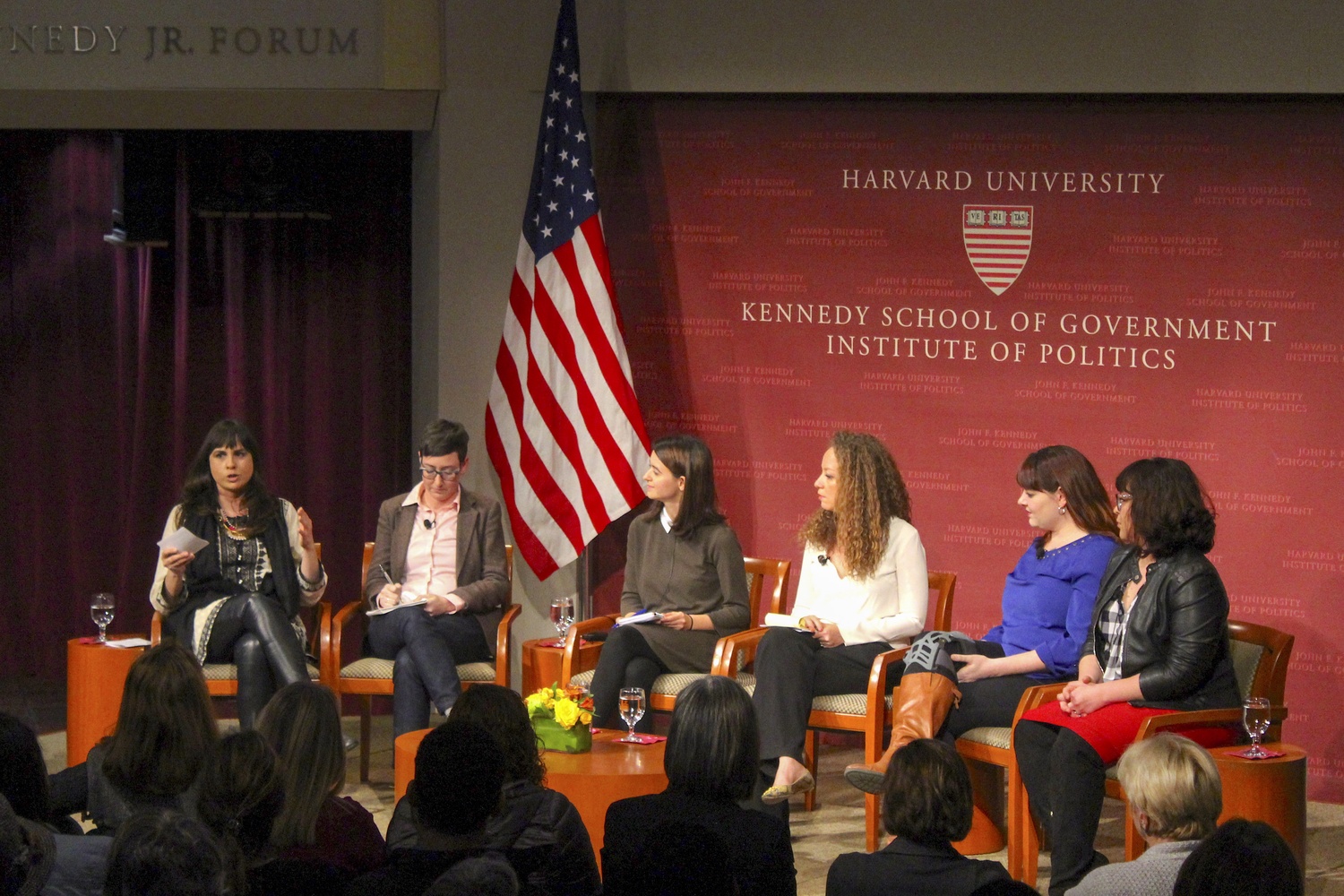 Leaders of female activism discuss the women’s march and other female-led forms of protest Tuesday night at the Institute of Politics. By I. Blu Frankel
By Lucas Ward, Crimson Staff Writer

Leaders of five major political activism organizations came together at an Institute of Politics panel Tuesday to encourage attendees to mobilize against the Trump administration’s policies.

Hosted by Harvard’s Shorenstein Center, the all-woman panel event—called “Leaders of ‘The Resistance’”—included founders and organizers of several political action groups including Vote.org and Indivisible.

Panel moderator Meighan M. Stone, an Entrepreneurship Fellow at the Shorenstein Center and president of the Malala Fund, began the event by sharing a clip from CNN depicting town hall protests across the country.

Panelist Leah Greenberg said proliferation of town hall protests prompted the formation of her organization Indivisible, a non-profit website that aims to engage protesters and activists in the style of the Tea Party under former president Barack Obama's administration.

“There’s no question that Donald Trump is a unifying force in the sense that he’s unifying a lot of people against him,” Greenberg said. “I think that there is a danger at the same time to treating Trump as ahistorical and discounting the conditions that led to and enabled and drove his rise.”

Andrea E. Hailey, founder of the Civic Engagement Fund, compared efforts by the panelists to what she saw as outdated tactics by Democratic Party.

“We have a strategy in the Democratic Party of putting a lot of money into TV dollars…only 23 percent of millennials get their information from TV,” Hailey said. “Well, if we’re only communicating on TV, then we have a problem there.”

After playing a clip of a pitch that panelist and Vote.org founder Debra Cleaver gave during a conference, Stone asked Cleaver about her plans to mitigate potential voter drop-off between 2016 and 2018. Cleaver described what it takes to turn someone into a lifetime voter.

Amanda Litman, co-founder of youth political recruitment organization Run for Something, took the opportunity to encourage audience members to serve on their city council or other local positions and highlighted the lack of representation of racial minorities and women in politics.

“One of the things I’ve heard a lot from especially young women and people of color is ‘I’m not qualified, my resume’s not good enough, who am I to ask for votes from people?’” Litman said. “Donald Trump is president—you can serve on your city council.

"You are smarter, and a better listener, and a harder worker than the President of the United States,” she added.