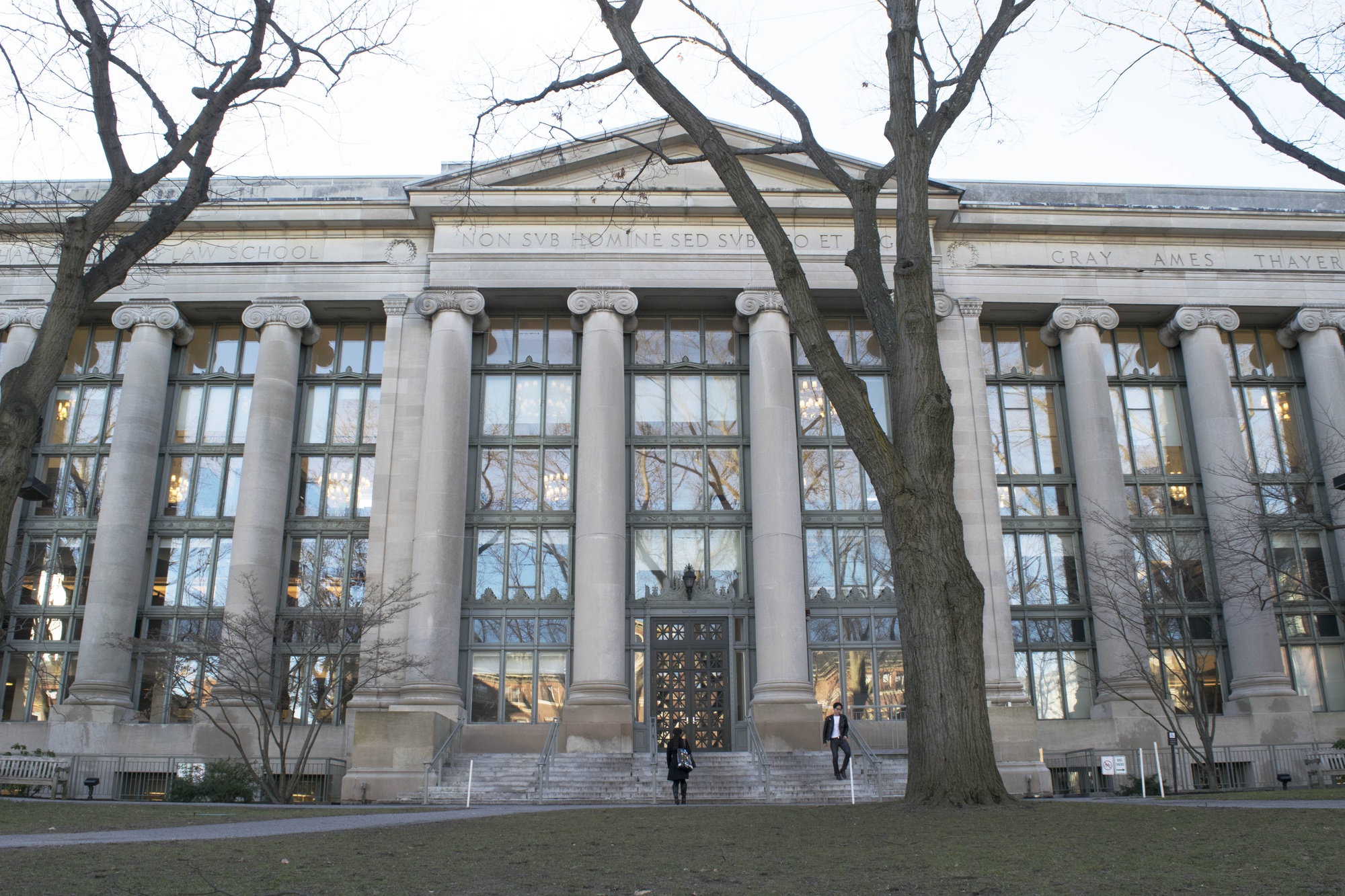 The Harvard Law School library at Langdell Hall is open to all Harvard ID holders normally, and only to Harvard law affiliates during exam periods.
By Jamie D. Halper, Crimson Staff Writer

When Louisa H. McIntyre ’16 was a junior at the College, she knew she wanted to go to Harvard Law School. But first, she decided, she would try something a little different: stunt work.

In addition to working as a paralegal at a New York City legal assistance group, McIntyre is also pursuing stunt work during her two years before attending the Law School.

“I went to a workshop that was for learning how to do stunts for movies and how to do stage fighting,” McIntyre said. “I’ve done martial arts for a really long time. That’s sort of an interest I’m pursuing. I’m still in the very preliminary stages.”

In the fall of 2018, McIntyre plans to return to Cambridge with the second class of students admitted through the Harvard Law School’s Junior Deferral Program.

Started in 2014, the program allows College juniors to apply and gain acceptance early on the condition that they work or study for at least two years before matriculating. The program is one of many efforts at the Law School to both attract a broader range of applicants and ensure that students have work experience before enrolling.

Just last week, the school announced that it would begin accepting the Graduate Record Examination instead of the more traditional Law School Admission Test, and in recent years the Law School has increasingly emphasized that its applicants have work experience before enrolling. Immediately after the financial crisis in 2008, the number of applicants to the Law School dropped dramatically, but have been increasing in more recent years.

Jessica L. Soban ’02, associate dean of admissions at the Law School, declined to provide admissions statistics for the program because, she said, it is still in a pilot stage. The first class of students accepted through this program will begin their studies at the Law School this fall.

Soban said, however, that the school does not have a fixed number of spots available in any given JDP application cycle.

Once a student has been accepted to the program, just how they spend their two years is largely up to them, as long as there is some “structure.”

Elise M. Baranouski ’15, a member of the first class of juniors to be accepted to the to the program in 2014, has worked at an international human rights law firm since she graduated. She said the professional experience has helped her understand the importance of a formal legal education.

“Because international law is a bit less traditionally legal, or formally legal, I was able to do a lot of the things that the lawyers at the firm were doing, but also see ways in which getting a legal education would really help me and advance me in the field,” Baranouski said.

Soban said that so far, every student who has been admitted to the program has accepted the offer of admission, and that every student admitted to matriculate next fall is still in the program. While the program requires students to defer for at least two years, it allows students to defer longer if they wish, Soban said. The school’s current policy for regular admits is to allow up to three years deferral, but Soban said if a JDP admit had a valid reason for adding an additional year of deferral, that could also be possible.

“We’re highly encouraging of this extending further if you’re doing something that you’re passionate about,” Soban said. “We still want you to come back, but we want people to go out and have those experiences.”

Participants in the program said it also provides them with a rough outline for their postgraduate life.

“I like clarity and organization; you can call me Type A. I liked the idea of knowing what I was going to do, but not having to do it right away,” Jacob R. Carrel ’16, who has spent his deferral working for organizations looking to engage young people in public service, said.

Carrel said the program allowed him to focus on an interest without having to consider how it would appear to law schools.

“[The program] allowed me to go do the exciting work of getting more young people into public service, which is what I really want to do, but I wouldn’t have otherwise known was the right thing to do if I was still worried about what it looked like on a law school application,” he said.

Aaron M. Mukerjee ’16, who will attend the Law School in the fall of 2018 and is currently working for a senior fellow at Harvard Business School, warned against applying to the program solely for the sake having a post-graduate plan in place.

“You have to be sure you want to go to Harvard Law School, because there are other programs for a lot of students, whether it’s a scholarship at another school, there are other top schools that people considered for other reasons,” Mukerjee said.

Soban said that students accepted to the program have maintained their academic success through their senior year, even if though will not be factored into the initial application process. Still, accepted students must submit their final transcript to the Law School.

“If there were a significant academic discrepancy in that fourth-year GPA versus what we had seen, we would sit down and have a conversation. We have not had to have any of those conversations,” Soban said.

Christopher B. Cruz ’17, who will work in consulting during his deferral years, said he and the people he knows in the program have continued to work hard during their final year.

“Supposedly there is an argument that students who are accepted early to a graduate school will tend to slack off their final year, and I’m very much against that hypothesis,” Cruz said.