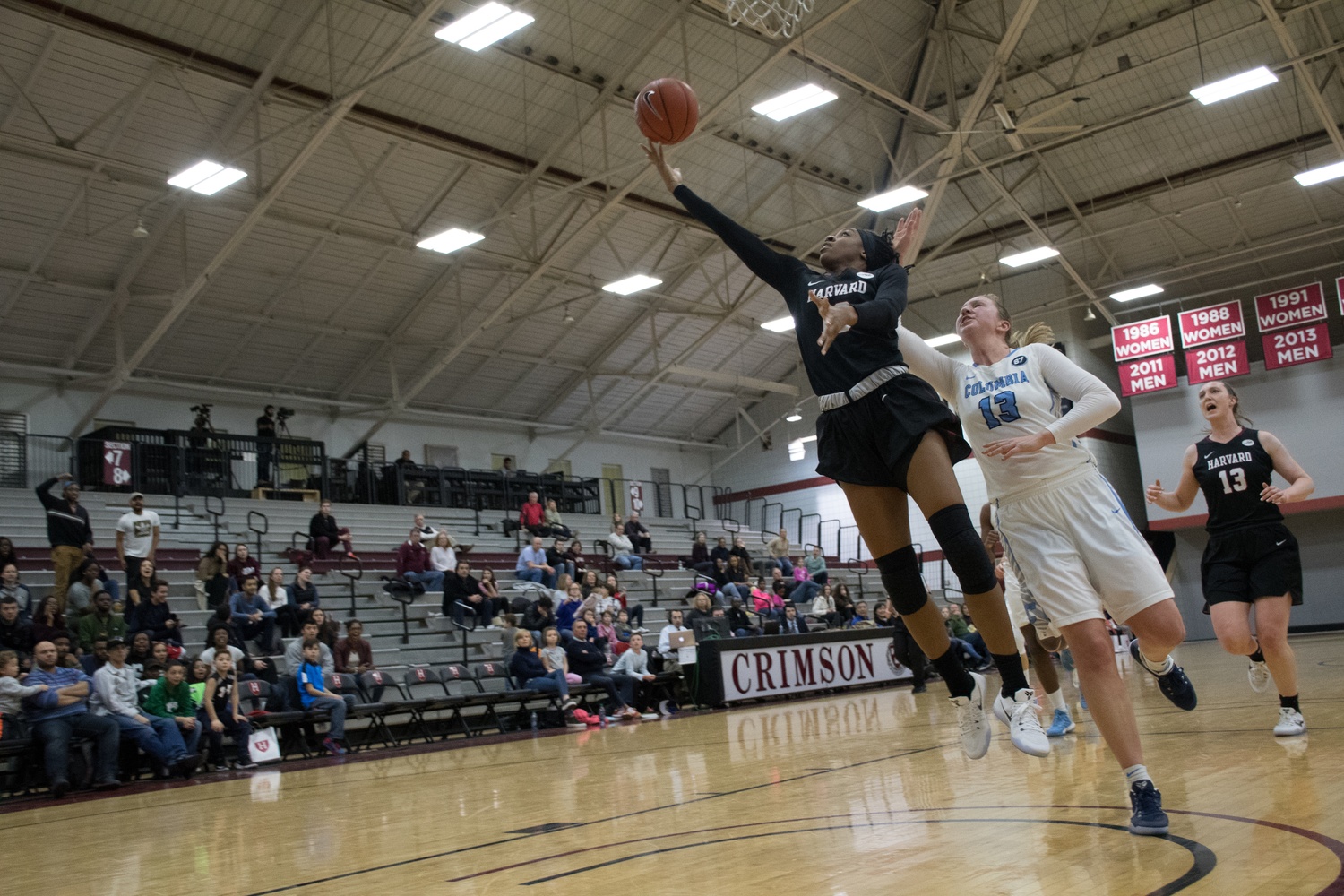 The Crimson and senior forward Destiny Nunley look to avenge losses by rising past Princeton and Penn. By Megan M. Ross
By Henry Zhu, Contributing Writer

Heading into the last weekend of regular season play, Harvard women’s basketball looks to avenge mid-season losses against the “Killer P’s” as it hosts Princeton and Penn at Lavietes Pavilion.

Harvard (20-5, 8-4 Ivy) will play against likely opponents in the inaugural Ivy League Tournament, which takes place in Philadelphia next weekend and will propel the champion to the NCAA Tournament.

Results on Friday and Saturday against those respective teams will solidify tournament seedings.

“The Ivy League is a long season,” senior co-captain Taylor Finley said. “Now we have the tournament to make adjustments, learn from our mistakes, and finish strong.”

With much on the line, Harvard hopes to build momentum into postseason play as it faces its two most challenging Ivy opponents.

The Crimson was handed a tough reality check the last time it played its Delaware River Valley rivals, as Penn routed Harvard 63-43 on Feb. 3 before Princeton won 63-58 in a hard-fought overtime victory the next day.

The two defeats were the bookend to the Crimson’s historic 16-game winning streak.

Since then, Harvard’s season has been defined by inconsistent performances, including defeats against Yale and Cornell, which have tainted an otherwise excellent season.

With an 8-4 conference record, Harvard looks to shore up its struggles against top-tier Ivy opponents with a strong performance this weekend at home.

In Penn, Harvard faces arguably its toughest challenge of the season, as Penn has only improved since its February victory against the Crimson. Led by the Ivy League’s rebound and block leader, Michelle Nwokedi, the Quakers are a dominant low-post team that will pose significant challenges for Harvard.

Harvard will look towards Penn’s only Ivy defeat on Feb. 18 against Yale as proof that a successful game plan will be needed in order to defeat the Quakers.

In that game, Penn had an 18-point second half and committed 19 turnovers, eight more than its season average 11 turnovers per game. With the Bulldogs limiting the Quakers to shooting only 6-for-25 beyond the three-point line, Penn was also shut down in large part from its lack of perimeter scoring.

Although Penn has the better record of the Crimson’s two opponents this weekend, the matchup against Princeton should not be underestimated.

Winning eight of its last nine games, the Tigers have relied on the contributions of several key players, including freshman standout Bella Alarie, who leads the team with 12.7 points and 1.9 blocks per game.

Other important offensive pieces include sophomore guard Gabrielle Rush, who boasts a team-high 37.2 three-point conversion rate, as well as Leslie Robinson, who is second in team scoring with 10.2 points per game.

The Crimson will also face a strong defensive team, as the Tigers are second in the Ancient Eight in terms of points allowed with only 57.6 points per game.

“Last game [against Princeton] was not our best,” Finley said, “The game will be in our own control, such as knocking down the shots we know we can make and having confidence against their zone.”

The weekend will also mark the last home series to be played at Lavietes Pavilion by several outgoing leaders, including co-captains Destiny Nunley and Taylor Finley, and senior guard Grace Keane.

But they realize there are still tasks to complete.

“This still feels like a normal week,” senior co-captain Destiny Nunley said. “We still want to dominate. I am really excited and I think it will be two fantastic matchups.”

For the Crimson, victories against both Princeton and Penn this weekend would provide a boost of momentum heading into the Ivy League tournament, but successfully doing so will not be easy.

Harvard will need its best play from all facets of the court to hold back two teams who are just as hungry for a good end to the regular season.

The playoffs are a new and welcomed opportunity to reset the record, but first the team wants to end its season on a warm note.

“I think the tournament gives us a whole new opportunity,” Nunley said. “Before that, we just want to attack what we have forward and finish strong.”