Towns Unable to Will Men's Basketball Past Princeton 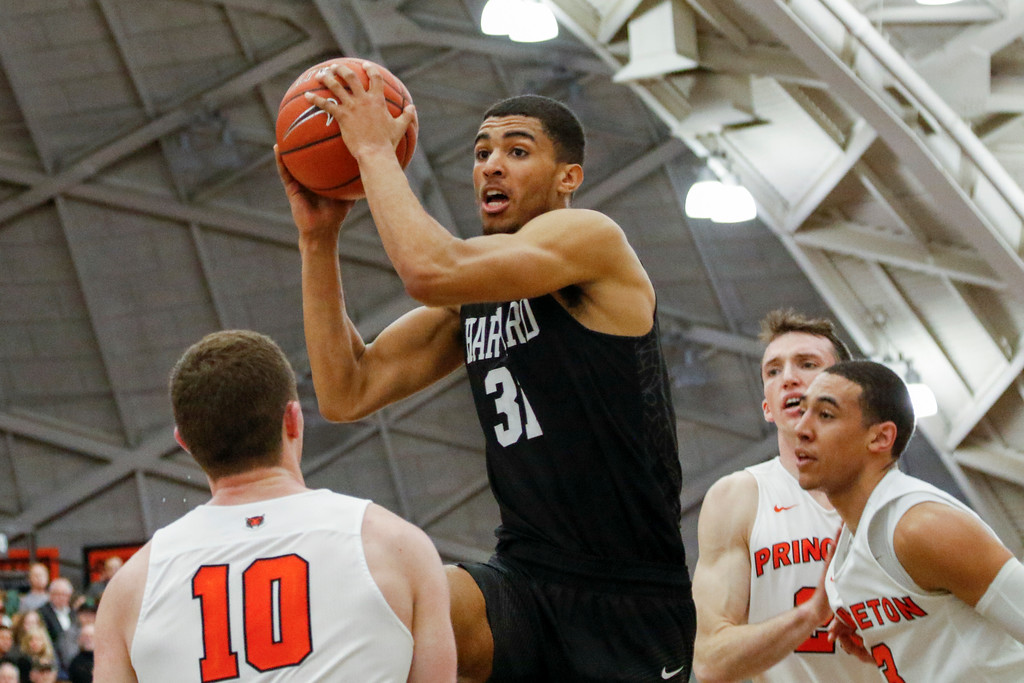 PRINCETON, N.J.—If Friday night’s game between the Harvard men’s basketball team and its counterpart from Princeton was supposed to be meaningless, somebody forgot to pass along the memo. Playing in front of a hostile crowd donning “All Stripes, One Streak” shirts and a larger audience watching on ESPNU, the Crimson had its heart broken by the Tigers again, this time, 73-69, at Jadwin Gymnasium.

The win pushed the Tigers’ win streak to 16 and added more fuel to a fire between two teams that appear to be on a collision course for next Sunday’s Ivy League Championship Game.Although the teams are locked into the top two seeds for the inaugural conference tournament next weekend, it was the third meeting in a row between the Crimson (18-8, 10-3 Ivy League) and Princeton (20-6, 13-0) that came down to the final seven seconds.

“You can’t say enough about how hard both teams played,” Harvard coach Tommy Amaker said. “All the kids were just tremendous on both squads. I’m proud of our kids for the effort that we displayed here tonight and obviously Princeton is very good. They’re undefeated in the league for a reason, they’re experienced, and [they’re] a very tough matchup all over the floor.”

For the second time this season, the result was hanging in the balance as the final minute wound down. With the game tied at 69 with just over a minute to play, Tigers senior forward Steven Cook, who had willed his team all night long, made one of his only mistakes of the evening. The Winnetka, Ill. native barreled into the lane, throwing up an errant layup and giving the Crimson a transition opportunity and a chance to finally take the lead after fighting tooth and nail to keep pace with a hot-shooting Princeton attack.

With chants of “airball” resounding from a raucous student section, freshman point guard Bryce Aiken drove through the Tiger defense but was called for a charge. The turnover, Aiken’s fifth of the evening, gave Princeton another shot to tilt the seesaw’s balance as the clock prepared to let out its final 48 ticks. After the Tigers took a timeout before running through their offense, senior forward Spencer Weisz bricked a long three.

Shades of four Saturdays prior came to mind as a long rebound landed in the arms of a Tiger big man, this time they belonged to sophomore guard Myles Stephens.

With the shot clock unplugged, Princeton coach Mitch Henderson implored his team to hold for the last shot. Despite Cook having the hot hand for most of the evening, junior guard Amir Bell stood with the ball at the top of the key as his teammates swarmed to the corners. Opposite the 6’4” guard was Harvard freshman forward Chris Lewis.

Bell waited until the clock read six. The East Brunswick, N.J. native used his off hand—his left one—to drive past Lewis, elevate, and bank in an off-balance layup with 1.1 seconds to play. The Crimson would get no closer.

“It was a hell of a play,” freshman wing Justin Bassey said. “Chris played great defense, but I think it was really good offense. We’d like to have it back, and a few plays here and there, but it was a really good play and there’s not much more we could’ve done.”

After a back-and-forth first 17 minutes, the Tigers began pulling away as Harvard fell into a characteristic cold spell before the break. Princeton ended the half on a 9-2 run as sophomore guard Devin Cannady drained a three in co-captain Siyani Chambers’ face to end the half. The Crimson was doomed by 12 first half turnovers during a half in which it only attempted 22 shots. 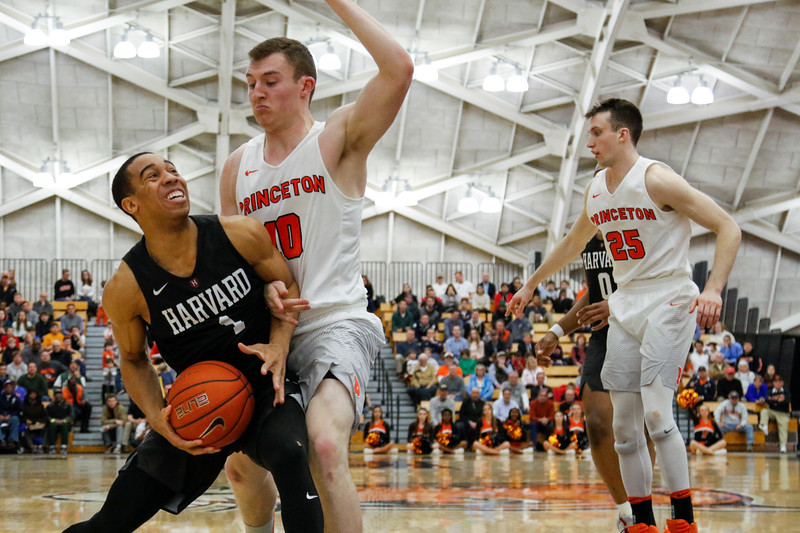 Harvard struggled Friday night against Princeton's defense, relying heavily on the three-point line. The Tigers own the number one defense in the Ivy League. By Timothy R. O'Meara

“I thought we were just sped up a little bit and trying to do too much, that’s been our biggest problem we’ve had all year,” Amaker said. “You can see it with our guards, we have to be able to take care of the ball much better than that.”

Coming out of a halftime performance that featured a woman catching bowls on her head while riding a unicycle, the Tigers tried to make a statement to start the second half, but Harvard had other plans. A failed throwdown from Stephens on an alley-oop gave the Crimson numbers on the other end. Freshman swingman Justin Bassey drilled a three and back-to-back triples from Chambers and freshman forward Seth Towns erased the nine-point halftime deficit.

Harvard rode Towns all evening. The Columbus, Ohio native was consistent and efficient on a night when the Crimson needed a steady hand on the offensive end. Aiken had the worst game of his college career, going 1-of-10 from the field, including an 0-for-7 mark from long range. He and Chambers combined for nine turnovers. Towns found his rhythm early in the first half and kept riding the wave.

“Honestly, my teammates just found me when I was open,” Towns said. “They have confidence in me to make shots and I certainly do so I was just doing what I could to get us a win. It didn’t turn out that way, but both teams were fighting.”

Harvard’s offense was about as one-dimensional as possible to start the game. The Crimson’s first 18 points came via three-pointers and the guests did not hit their first two-point field goal until there was 10:06 to play in the first half.

“We want to find the open man,” Amaker said. “I thought we were trying to share it and play inside out through Lewis and Zena and I thought that was very productive for us and the shots were there. I thought our guys did a tremendous job, particularly in the first half of making a lot of the threes.”

Towns hit two treys before the game’s first media timeout and entered the locker room at halftime with 14 points. Whether he was stroking jumpers over a zone or driving and throwing down a dunk like the one he flushed with 2:58 to play to tie the contest at 65, Towns could not be stopped. He finished the night with a career-high 26 points on 9-of-12 shooting. Princeton did not cool off much after intermission—making just one fewer field goal after the break—but the freshman was there to keep Harvard within striking distance.

For as good as Towns was on the offensive end, Cook was just a little bit better. The senior had four more points than Towns—which ended up being the difference in the game—and made 13 of his 16 shot attempts on a night when the Crimson was able to frustrate Cannady for the second game in a row.

Despite 61 of its 73 points coming from Cannady, Stephens, and Cook, it was the rebound by Stephens and the isolation dagger from Bell that proved to be the difference between the two teams—a difference Henderson described as “razor thin”—on Friday. Just in case the Ivy League Tournament needed another storyline, Friday provided it.

“I think that we have become [rivals] with a number of teams in our league with the success that these kids have had, which is a good thing,” Amaker said. “I think our league is really, really hard and challenging. Whether it’s us and Princeton or us and Yale or us and Penn or Penn and Princeton, there are a lot of darn good matchups in our conference that have become high-quality basketball games.”