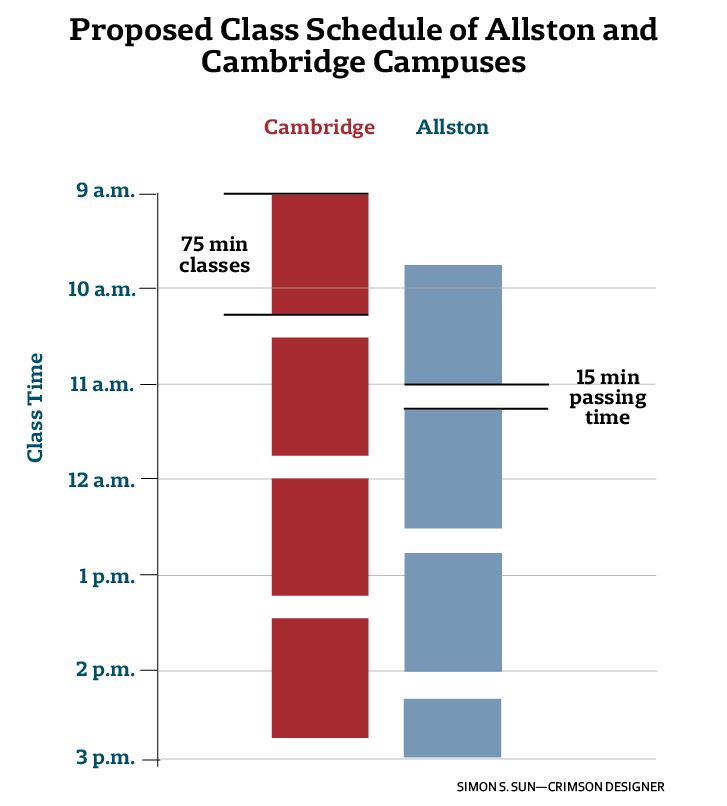 Harvard students and professors could find their daily course schedules reshuffled—with classes lasting 75 minutes followed by 15 minutes of passing time, instead of the traditional “Harvard Time”—as early as the fall of 2018.

At their monthly meeting Tuesday, the Faculty of Arts and Science will discuss a motion submitted by Dean of Undergraduate Education Jay M. Harris to change Harvard’s course schedule in preparation for the opening of Harvard’s new campus in Allston. The goal of the changed course schedule is to allow students to travel between Harvard’s academic buildings in Cambridge and the new buildings across the river.

While the Allston campus isn’t slated to open until 2020, the changes will begin in the fall of 2018, should the motion pass. If so, the committee will review the efficacy of the program after one year, in the fall of 2019 and again five years later.

Under the most recent proposal, one hour courses would be extended to 75 minutes, although instructors would not be required to use the whole time, followed by 15 minutes of designated passing time between courses that occurred on the same campus. The proposed schedule would end the de facto seven minute grace period between classes colloquially known as “Harvard Time.”

Courses which usually last longer than an hour, like seminars and labs, would be restricted to certain time slots.

FAS currently schedules over 80 percent of its lecture courses between 10 a.m. and 2 p.m, according to a Frequently Asked Questions document distributed to Faculty members alongside the motion. The document states that this clumping of courses overburdens the number of available classrooms. The new legislation mandates that departments spread out courses within a 9 a.m. to 4 p.m. schedule so that there is a roughly even distribution of classes at each start time.

Unlike previous proposals, courses meeting more than once a week would continue to meet on a Monday, Wednesday, and Friday or a Tuesday and Thursday schedule.

FAS has been considering a change to its scheduling policy since 2013, according to a document distributed to professors before the Faculty meeting. Provost Alan M. Garber ’76 convened a committee in 2013, headed by Harris and Deputy Provost Peggy Newell. Committee members met with a variety of student and faculty groups, including the Undergraduate Council Education Committee, and the FAS Undergraduate Educational Policy Committee.

Also on the agenda for Tuesday’s meeting is a report from government Professor Danielle S. Allen on the Task Force on Inclusion and Belonging. University President Drew G. Faust convened the committee in September to evaluate Harvard’s efforts to create an inclusive environment.

In addition, Statistics department chair Neil Shephard will move that Faust create a Standing Committee on the S.M. Degree in Data Science. The motion was discussed at last month’s faculty meeting.