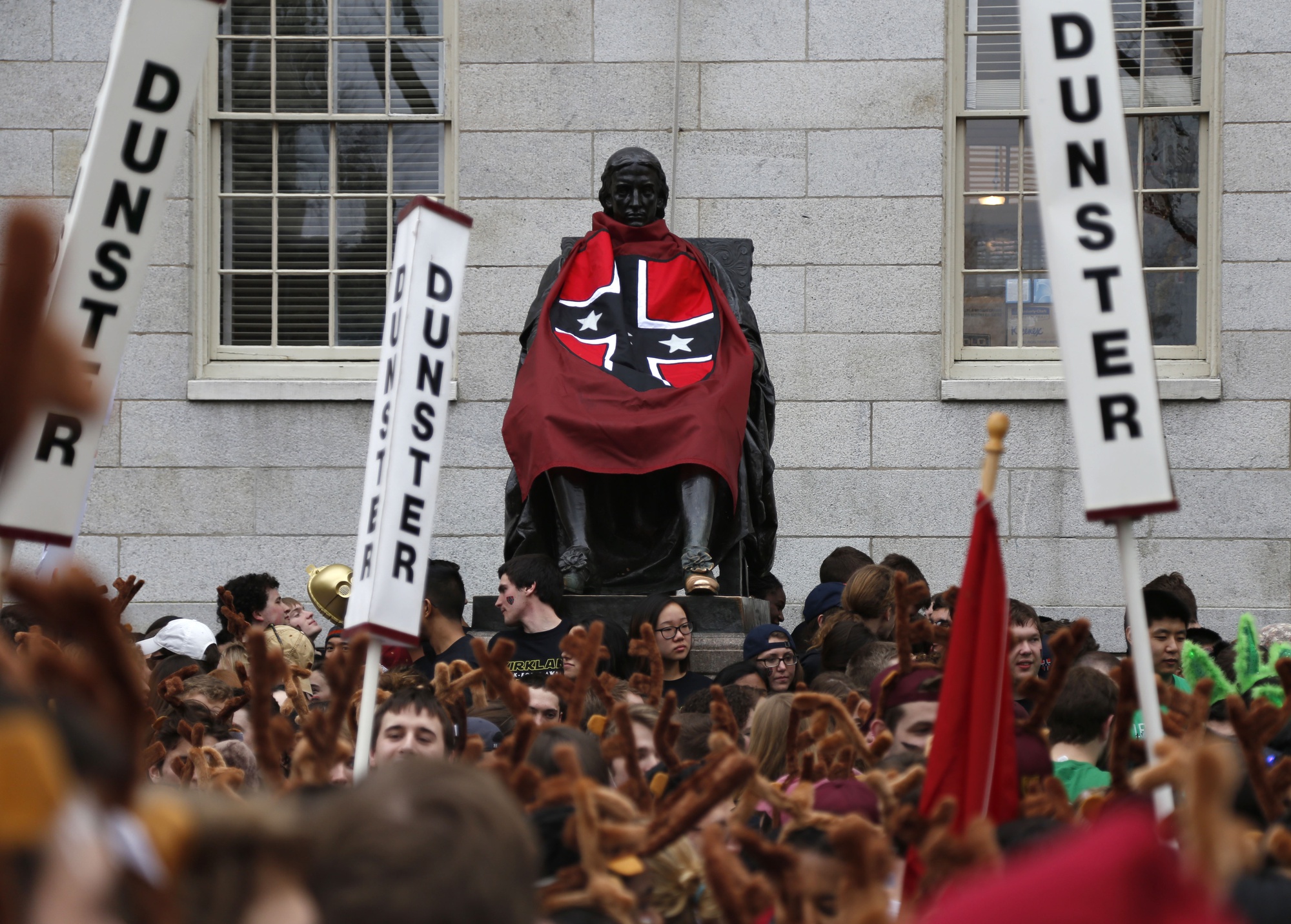 Upperclassmen rally around the John Harvard statue before delivering letters to freshmen notifying them of their house placement. In recent decades, Housing Day has grown into a holiday for students at the College.
Advertisement
Advertisement

That’s the whole trouble with the whole stupid housing thing. You can’t ever find people who aren’t phonies. They bicker about the goddam group name or something, or want to block with Alexander, just about the biggest bastard that ever lived in the whole crumby history of the world.
By Drew C. Pendergrass

If you really want to hear about it, the first thing you’ll probably want to know is where I was on Housing Day, what my lousy entryway was like, and all that “Harvard Admissions blog” kind of crap, but I don’t feel like going into it, if you want to know the truth.

In the first place, that stuff bores me, and in the second place I was happy to be floating. That’s not what Lillian would say, of course. When I’m around her I feel like a prize horse’s ass, the way she talks to me in that phony voice of hers: “How horrible, Holden! Of course you can block with us!” I swear, she should just carry around a broken record or something, because that’s what she sounds like.

Freshman spring I made a rule that I was going to quit screwing around with girls, because deep down that’s as much a waste of my time as the whole blocking thing. Of course, I break that rule all the time, but it’s always crumby. Girls don’t get that I’m busy. They look at my GPA and what I do outside of class and just assume I’m free to shoot the bull for a while. And I know Lillian, hopping around like a yardstick is shoved halfway up her ass, just wants to spend all night necking or something. Why else would she want to block with me? Girls only care about necking.

Lillian met my old buddy Ernie at Horace Mann and they’re still dating. Lillian said she wanted to block with me because that’s what Ernie wanted, but that’s just phony and she knows it. That’s the whole trouble with the whole stupid housing thing. You can’t ever find people who aren’t phonies. They bicker about the goddam group name or something, or want to block with Alexander, just about the biggest bastard that ever lived in the whole crumby history of the world.

No I don’t want to tell you about blocking, but I do want to say a word or two about Alexander Robertson Blair, just about the biggest, crumbiest, dumbest sex maniac I’ve ever seen. He always asks, “Are you alone, kiddo?” at breakfast, always blocking up the whole goddam traffic in the aisle like some goddam car that’s stopped working. It’s so embarrassing. Just because he’s dating my sister he thinks he’s my dad or something. You could tell the people lining up behind him didn’t like him. So help me God, I didn’t like him. Even my sister doesn’t like him and she’s dating him.

I don’t want you to get the idea that I’m a goddam icicle or something. I’d like to block with them if they didn’t have such an attachment to crumby Alexander, and if Lillian wasn’t such a phony. Plus Ernie nearly makes you sick the way he shovels all that Catch of the Day into his goddam mouth. And he always has a lot of pimples.

That’s all I’m going to tell about. I could probably tell you about my house, but I don’t really feel like it. Don’t go anywhere near the crumby housing form at all, is what I have to say. That’s the half-brilliant advice I’ve come up with.