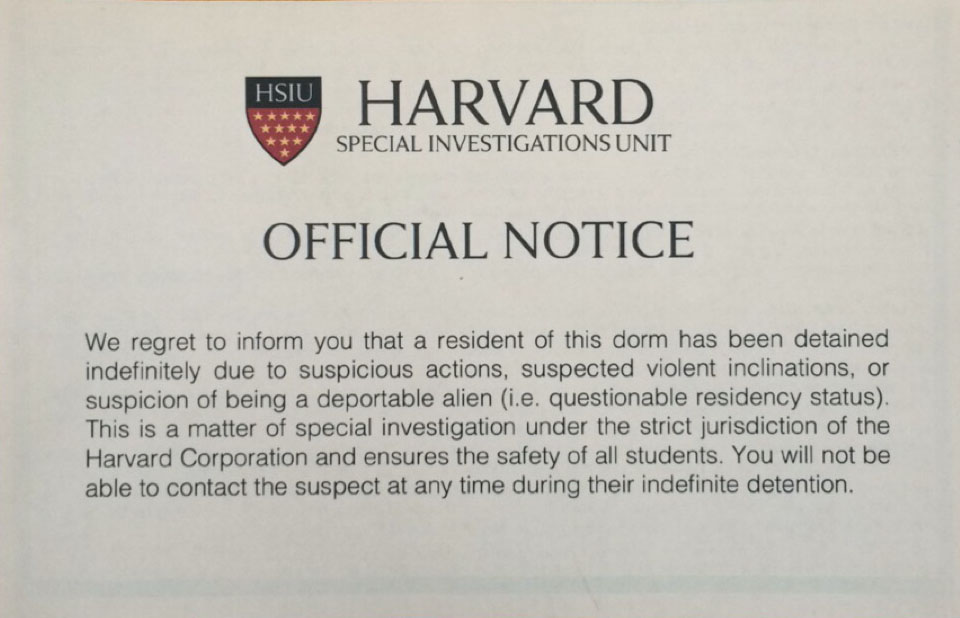 Mock notices from a purported “Harvard Special Investigations Unit” warning students that a resident of their dorm “has been detained indefinitely” sparked outrage from several students, who called the false flyers disturbing, and prompted the involved students groups to apologize.
By Lauren A. Sierra and Derek G. Xiao, Crimson Staff Writers

Mock notices from a purported “Harvard Special Investigations Unit” warning students that a resident of their dorm “has been detained indefinitely” sparked outrage from several students, who called the false flyers disturbing, and prompted the involved students groups to apologize.

Formally cosigned by Harvard Concilio Latino, the Harvard Islamic Society, and the Harvard Black Students Association and orchestrated by the Harvard Palestine Solidarity Committee, the flyer posed as a notice informing students about an ongoing investigation in the recipient’s dormitory.

“We regret to inform you that a resident of this dorm has been detained indefinitely due to suspicious actions, suspected violent inclinations, or suspicion of being a deportable alien (i.e. questionable residency status),” the flyers read. 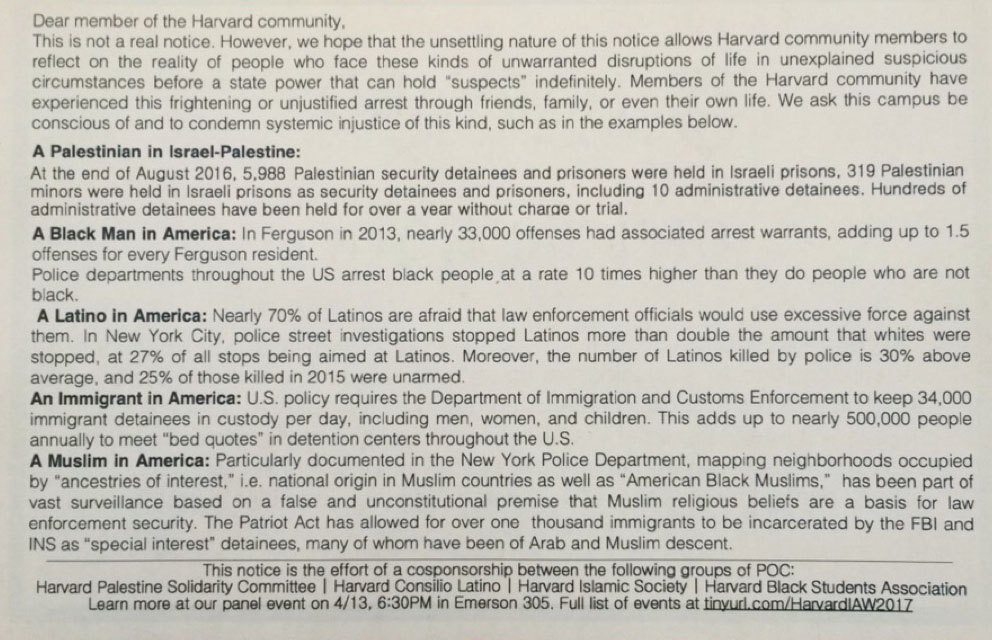 The provocative notices—which included information about a panel Thursday on incarceration—went on to explain that though the flyers were not real, they hoped that the “unsettling nature” of the notice “allows Harvard community members to reflect on the reality of people who face these kinds of unwarranted disruptions.”

Voicing shock and fear, however, several students took issue with the controversial method for publicizing these topics.

Karla V. Alvarado ’19, who noted that she had previously dealt with a similar situation because both of her parents used to be undocumented, described feeling troubled.

“As a member of the Latinx and black communities, I was really disturbed by the format of the flyer and how terrifying it was for students of color and undocumented students especially to receive the notice,” Nunez said.

By Monday evening, some of the students groups connected to the flyer had publicly apologized. In a joint statement, the board of Concilio Latino wrote that the group had not been previously aware of the flyer’s exact contents and apologized for the harm it may have caused students.

“[The flyers] are fake, but the effects they may have had on any of you are beyond real and represent something entirely antithetical to what Concilio stands for,” the statement reads.

Fatima M. Bishtawi ’17, the co-president of the Palestine Solidarity Committee, wrote in an emailed statement that though there was a miscommunication with Concilio Latino, both of the other organizations, the Black Students Association and Harvard Islamic Society, “saw the flyer beforehand and approved it.”

In a statement on behalf of the entire Palestine Solidarity Committee, Bishtawi also apologized for the flyer’s contents.

“As organizers of this initiative, we would like to unequivocally apologize for any trauma and pain provoked by the seriousness of this notice,” the statement read.

The group added that the original intent of the flyers were to invoke the experiences of those who “do not always get to walk away from a notice knowing that it is fake.”

“The campaign was intended to communicate that these issues are real, they’re jarring, they're emotional, and that is the reality,” the group said. The statement noted that "those who drafted this notice are themselves affected by the issues of administrative detention, criminalization, state violence, and deportation."

Shantell Williams ’18, the president of the Black Students Association did not respond to repeated requests for comment as of late Monday night.

A previous version of this article incorrectly indicated that Fatima M. Bishtawi ’17 is the president of the Palestine Solidarity Committee. In fact, Bishtawi is the co-president.