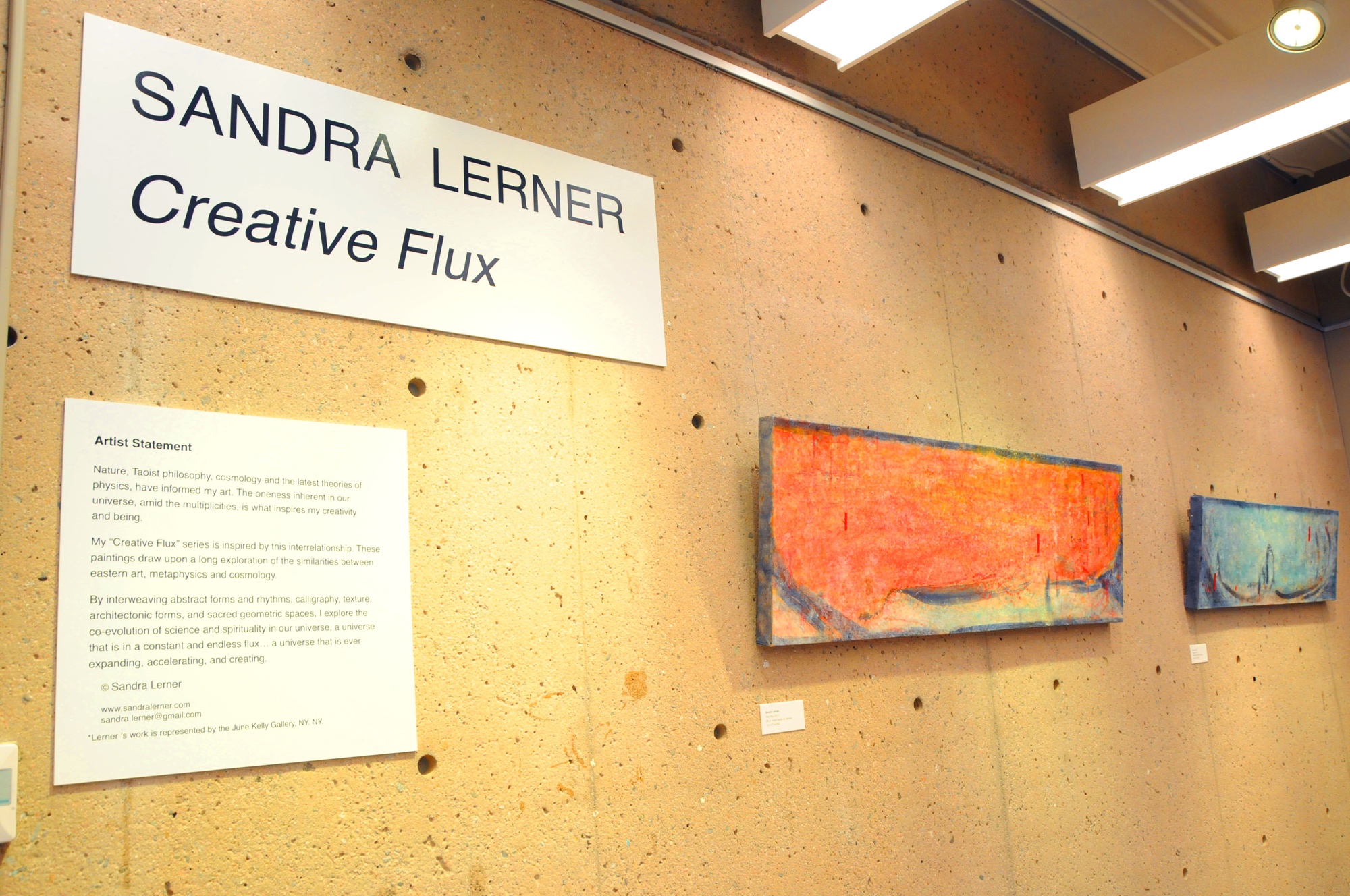 Sandra Lerner is a painter based in New York whose work explores the intersections between Eastern philosophy and theories in physics and cosmology. Her work is featured in collections around the world, including the Kampo Museum in Kyoto and the Aldrich Museum of Contemporary Art in Connecticut. Currently, ten of her paintings are on display in the Gutman Gallery, at Harvard’s Graduate School of Education. This exhibit, “Creative Flux,” takes as its theme visual representations of Taoism and modern physics.

The Harvard Crimson: When did you discover Taoism?

Sandra Lerner: In the sixties, I went to a gallery opening that was selling these books on Taoism, and I read a passage by Lao Tsu from the “Tao Te Ching”.

“Look, it cannot be seen-it is beyond form—

Listen, it cannot be heard-it is beyond sound.—

Grasp, it cannot be held- it is intangible.—

These three are indefinable,

Therefore they are joined in one.”

“Stand before it and there is no beginning.

Stay with the ancient Tao,

Move with the present.”

I discovered this in the midst of the human potential movement, and I became very interested in Taoism, Buddhism, and eastern philosophy. Then in the mid-sixties, I read Lawrence LeShan’s book, ‘The Medium, the Mystic, and the Physicist.’ I was thunderstruck by the similarities with physics and what they were proving and theorizing, which was so similar to what the Eastern mystics have been experiencing for thousands of years—that in the universe everything is interconnected, interdependent, and molecules on the smallest level [are] creating, annihilating, co-creating again.

THC: How have your trips to Japan and elsewhere in Asia influenced your art?

SL: I’ve travelled through Asia and been to Japan many times. I studied calligraphy with a master calligrapher there. This calligrapher in Japan sort of adopted me as a daughter, and I spent a total of eight months there studying with him, and I was an honored guest.

THC: How would you describe the paintings in this show?

SL: So what I do in my paintings is I use the dichotomies, which would be hard edges and the morphosis shape. For example, the line from the mountains where the softness of the background … seeps into this, and I have a framework for this, and it loops forward in the same way that Randall suggests that gravity is seeping in from a different universe. And also it could be that when we look at the sky, our eye is a frame, since we can’t see the whole universe in the same way astronomers look at the universe through a telescope. For me the lines thrusting outwards, using the hard edge with the texture and juxtaposing all the polarities in the paintings, is something that has really informed my work.

THC: Are the pictures meant to evoke landscape scenes?

SL: I try to suggest shapes. And many times these shapes to me look like mountains. It could be rivers, it could be lakes. And I just suggest, because I want the viewer to finish the rest of the story. And in this, I did feel the wave, because particles change into waves and waves change back into particles. Everywhere I am thinking about particles in flux and nature in flux as we are constantly evolving.

THC: What do you hope that the Harvard community takes away from your show?

SL: I really just want them to feel the work, and I think that with my work it’s not just a matter of thinking, it’s a matter of pondering. I just suggest things, but I also want someone to look and see what the calligraphy means and draw their own conclusions. So it’s something that the viewer participates in. I have had collectors say to me years after they bought paintings, every time we look at it, at different stages in our lives, it means different things, and it seems to evolve as they evolve.