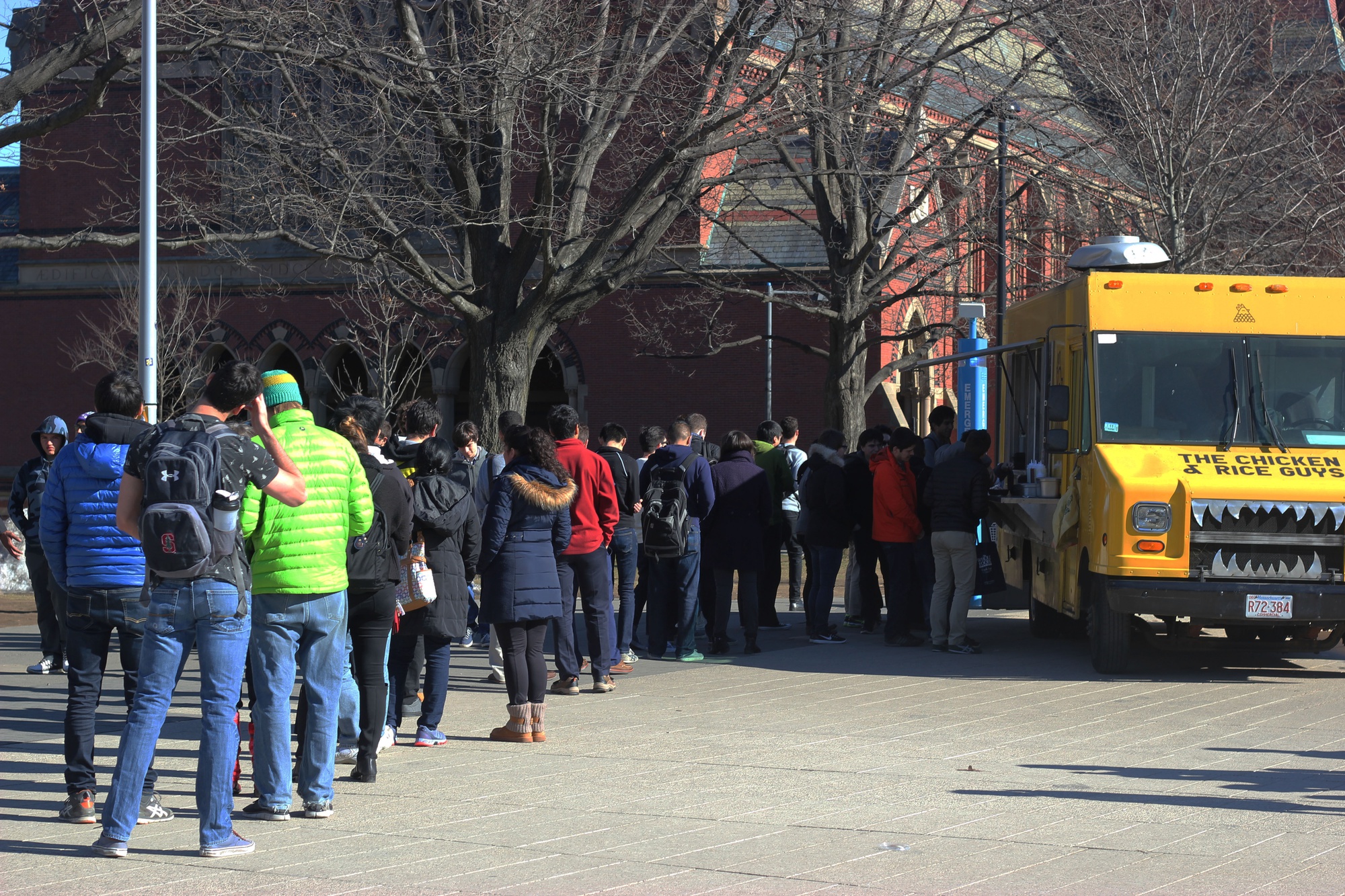 A line forms outside of the Chicken and Rice Guys food truck at the Science Center plaza. Northeastern students recently triumphed over Harvard in a Facebook competition that offered free snack size meals for a day to the winning study body.
By Alison W. Steinbach and Katherine E. Wang, Crimson Staff Writers 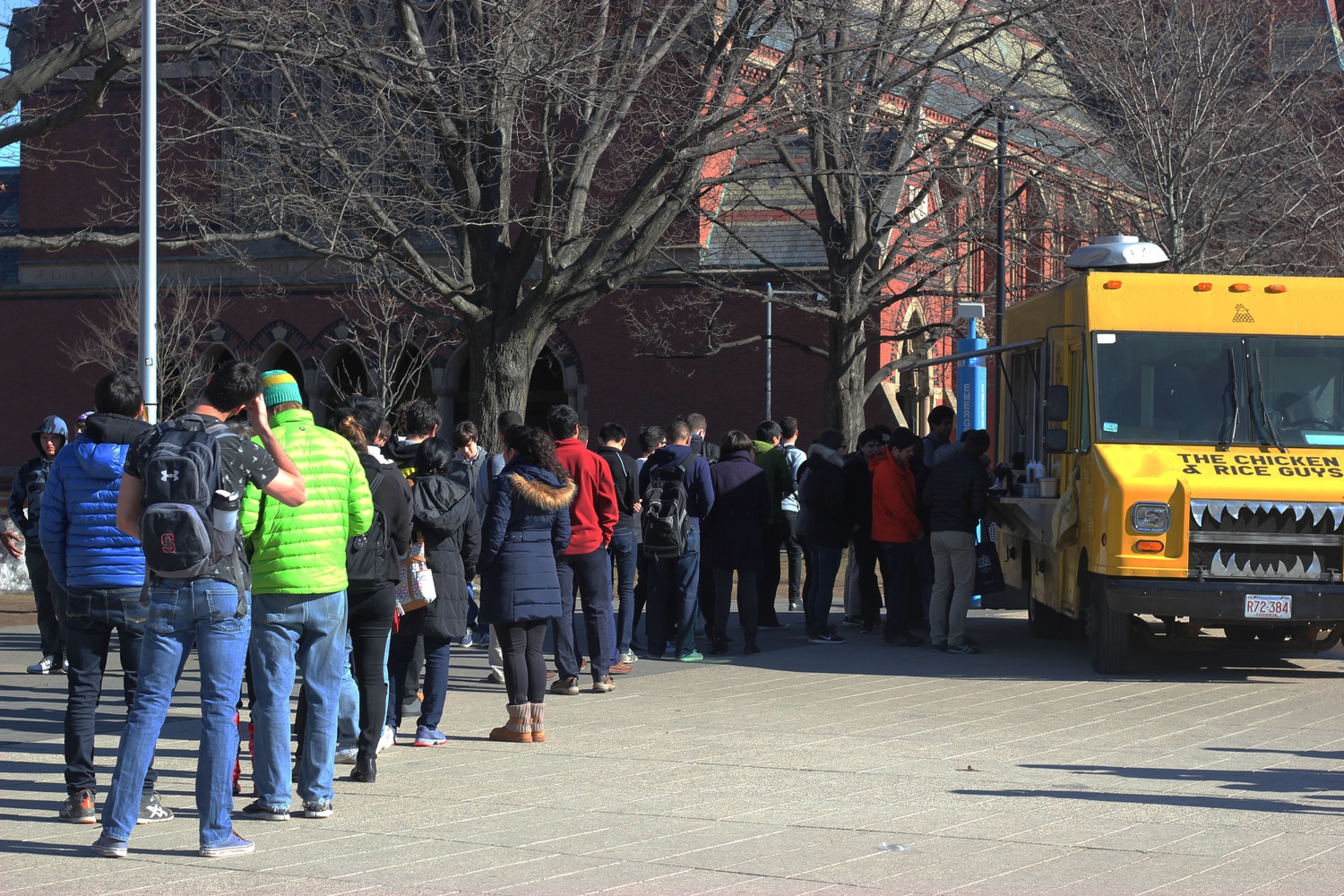 Hungry patrons line up in front of a Chicken and Rice Guys food truck about a year before an E. coli outbreak struck some of its food trucks in Boston. By Lauren A. Sierra

An outbreak of E. coli, a bacteria causing foodborne illness, has shuttered Chicken & Rice Guys locations across the Boston area, including the chain’s food truck commonly parked in the Science Center Plaza.

By Thursday night, the outbreak—one of the larger E. coli outbreaks in Mass.—had affected 15 people, with 10 people already hospitalized, according to the Boston Globe. In a statement sent early Thursday afternoon, Steven Collicelli, a marketing manager for the chain, wrote in an email that the cases have been linked to products from the food trucks and the Allston restaurant location between March 27 and April 6.

"So far we have heard of no cases related to our Harvard truck," Collicelli wrote.

After health inspectors confirmed seven initial cases on Tuesday, Chicken & Rice Guys closed their stores and food trucks, including the truck often outside the Science Center. The Chicken & Rice Guys locations passed a “thorough review” from health officials, according to Collicelli, and the officials are now investigating on food suppliers and personnel.

“All CNR operations will be temporarily suspended by the Health Department until at least Monday while we continue to test, work with investigators, and clean,” wrote Collicelli. Starting Wednesday, the company began testing its nearly 100 employees for E. coli. On Thursday, they hired independent food safety experts and another cleaning service to aid cleaning and inspecting.

According to the National Institutes of Health, E. coli can cause infection or irritation of the gastrointestinal tract, dehydration, fever, and, in some cases, paralysis.

As one of the primary food trucks in the Science Center Plaza, Chicken & Rice Guys is a popular option for some students.

Hannah Shen ’19, an inactive Crimson business editor, was “really surprised” to hear about the outbreak.

“I love that place,” Shen said. “Usually when I see it I’ll definitely get something from it, but I’m happy that I didn’t get it last week.”

Jason C. Shen ’17 said he ate at Chicken & Rice Guys biweekly last semester. He said he last ate at the truck either last week or the week prior.

“I actually didn’t know that they had this outbreak,” Shen said. “I guess that is kind of concerning, but I don’t know, I feel fine so far, so fingers crossed I guess.”

Jason Shen also said that the outbreak would not deter him from eating at Chicken & Rice Guys, should the food truck come back.

“I’m sure they’ll handle it the best that they can, and I trust them to resolve the issue,” he said. “I don’t think I’d have any problems with going back.”

Hannah Shen felt similarly, saying she hopes the problem is resolved and that people will feel safe eating there again.

“I honestly will still eat there because I think it’s a one-time thing, they’ve been serving for a long time, and there’s not really a replacement in the Square for it,” she said.

This is not the first time E. coli has affected the food scene around Harvard. In 2006, Harvard University Dining Services removed all spinach products from dining halls for a month after a nationwide E. coli outbreak in spinach.