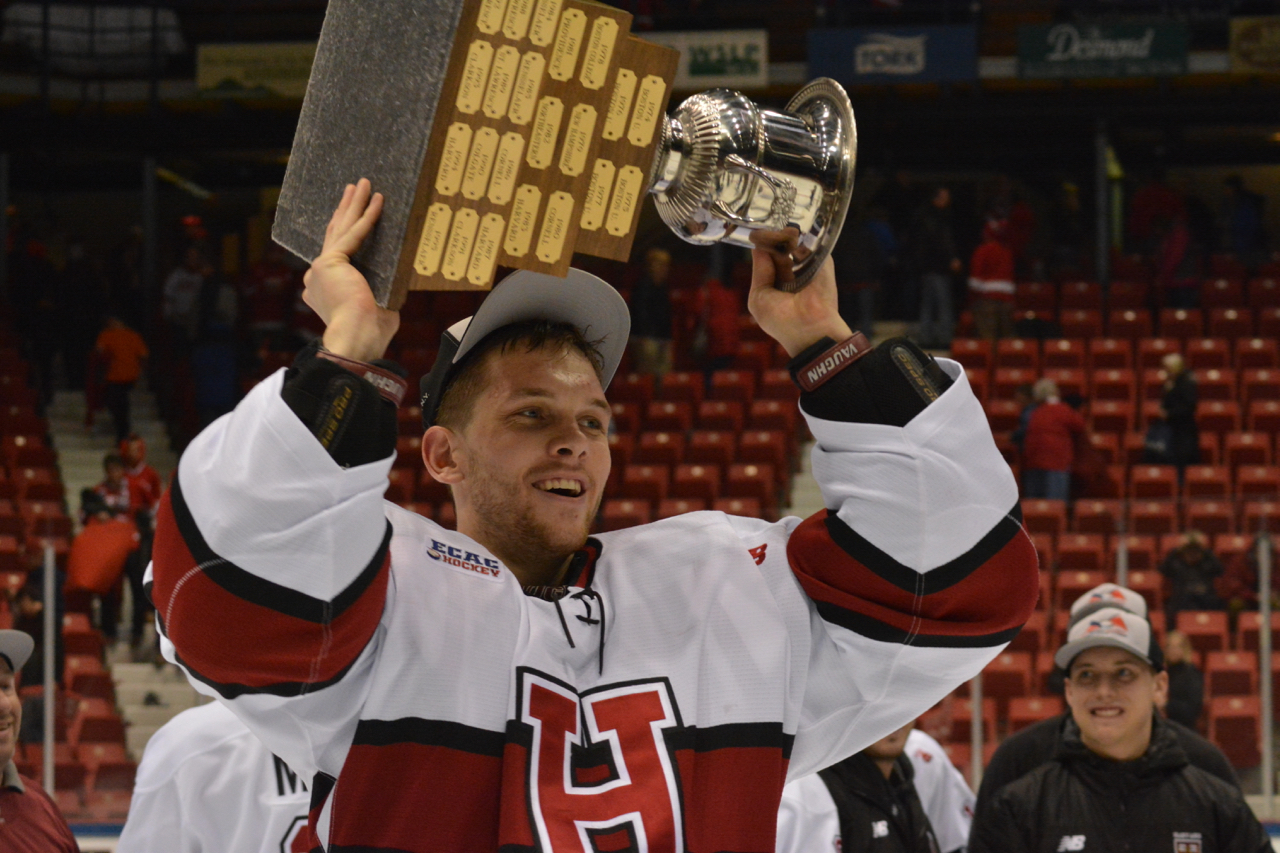 It’s the offseason, but the Harvard men’s hockey team, fresh off its memorable campaign to the Frozen Four, continues to experience firsts. With the announcement that juniors Eddie Ellis, Jake Horton, and Merrick Madsen will captain next year’s team, the Crimson’s uniforms will sport three “C’s” for the first time in the program’s 119-year history.

“We’ve had a long tradition of having one captain, and this group of kids had the option of voting if they wanted more than one,” Harvard coach Ted Donato ’91 explained. “I’m excited, and I think we got an interesting mix for captains.”

While typically operating with just a single captain, the Crimson, including this past season, has used a pair of captains nine times in its history.

Harvard’s 2017-2018 leadership group marks the 128th, 129th, and 130th captaincies since varsity hockey’s inception at the school. Madsen, set to don the crimson “C” from the crease, is the first Crimson goaltender to captain a team since the 1979-80 season saw John Hynes ’80 do so.

The announcement of Harvard’s historic three-headed captaincy came during the team’s annual end-of-year awards banquet, although the Crimson icemen already knew the results of their closed-door vote. Before the ballot, the players—the class of 2017 included—explicitly established that they wanted three captains for the upcoming campaign.

“I think that guys find that there’s a good balance between different types of captains that they like to have,” Ellis said. “Each guy just voted on his own on the number [of captains], and I guess most of the guys felt that…the most effective way that we could lead next year would be with three guys.” 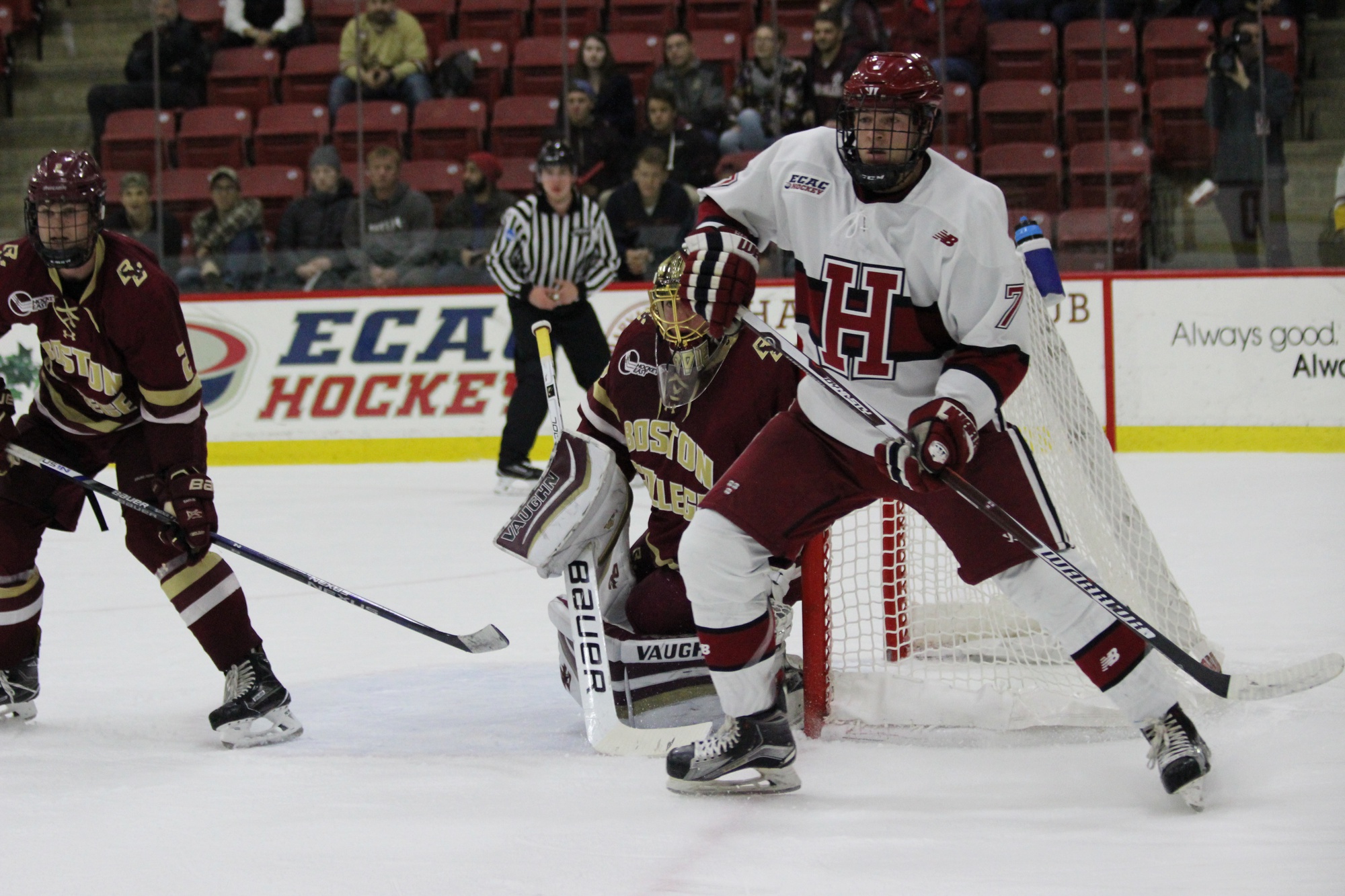 Newly appointed tri-captain Eddie Ellis, shown in action against Boston College on Nov. 18, 2016, played in 17 of 36 games for the Crimson this season. By Thomas W. Franck

Ellis, Horton, and Madsen look forward to assuming a greater leadership role in 2017-2018, as Harvard says goodbye to seven impactful seniors—a class that combined for a NCAA-best 193 points last season while providing invaluable mentorship in the locker room.

Horton attributes a large part of the Crimson’s success in the recent campaign to the tone set by the entire senior class, not just co-captains Devin Tringale and Alexander Kerfoot.

“Having the entire senior class being leaders and having everybody take on a different role…when you do that, your message gets spread a lot deeper,” Horton noted. “You have all seven seniors basically preaching the same message, and guys are going to buy it.”

Donato stressed the importance of leadership coming from all the seniors, rather than from just the captains.

“Over the last few years, our leadership has become much stronger…. We didn’t rely on just the guys who were wearing the letters,” Donato added. “Alexander Kerfoot and Devin Tringale were tremendous captains. I think one of their secret weapons was that they shared leadership as well.” 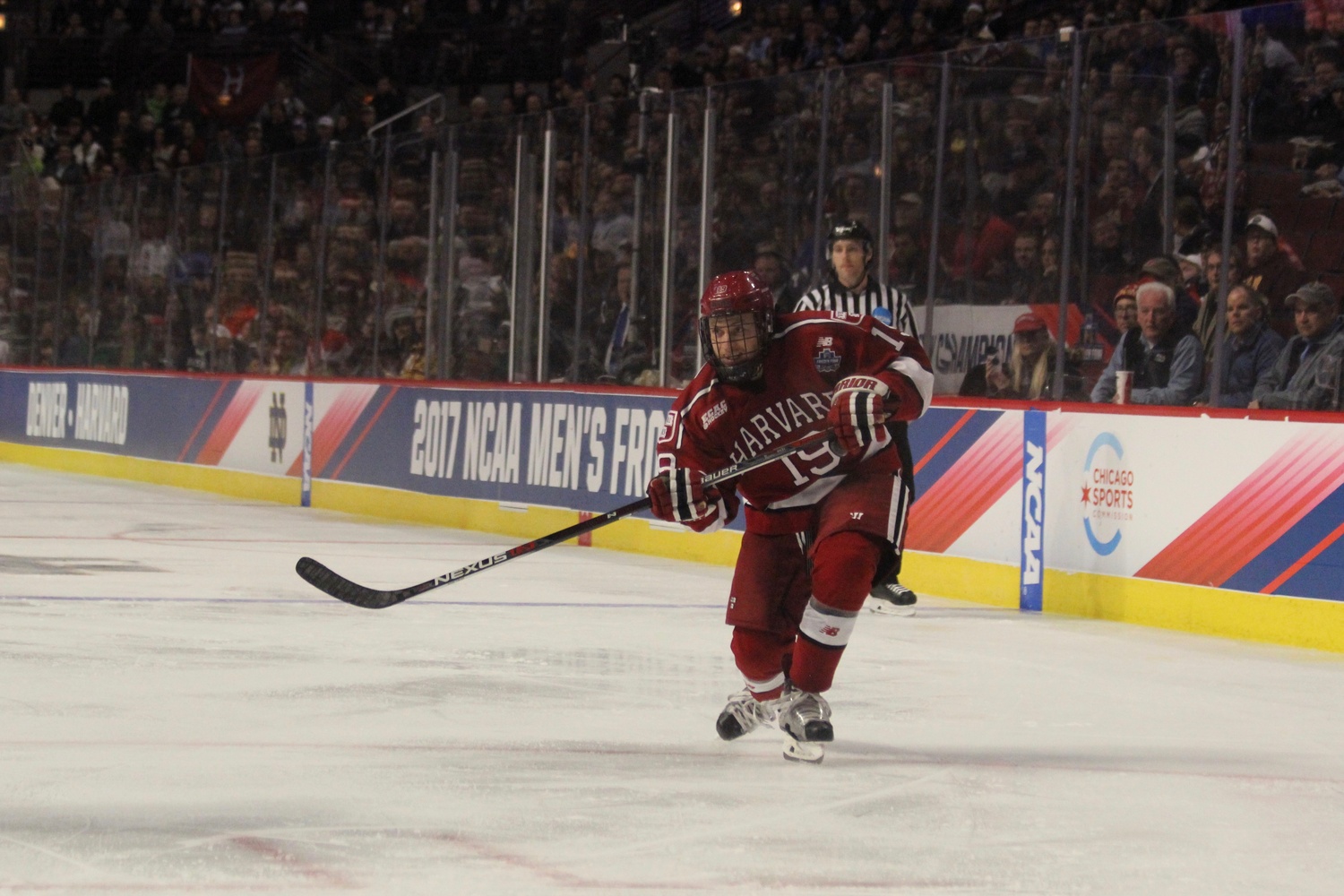 The captains effectively began their new roles as soon as they were announced. Tringale and Kerfoot are set to meet with next year’s trio in the coming weeks, and they’ve already passed down the reins to the three rising seniors, who will strive to foster this culture of leadership that extends beyond the letter-bearers.

“I never really understood how much [Tringale] and [Kerfoot] had to do behind the scenes,” Horton said. “You kind of really just become an intermediary [between the coaches and the players].”

The tri-captains will also work alongside ex-Navy SEAL Adam La Reau, whose team-building and leadership expertise has been vital to Harvard men’s hockey since 2013, to plan the coming year and set team goals.

“With Adam Le Reau, us captains might all sit down to have a conversation about what kinds of goals we want to have,” Madsen said. “Then the captains would go and run a meeting with the players...with the help of Adam—to kind of all get on the same page.”

The Crimson captains, still fresh off a thrilling ride to the Frozen Four this past year, are already looking ahead to next season, in which anything short of a national title game appearance will disappoint, according to Horton.

In the meantime, while many team members typically spend a portion of their summer in Cambridge for a combination of on-ice training, coursework, and internships, next season’s captains hope to assemble the whole team on campus at some point during the recess. This week of training and team bonding would presumably help the incoming freshmen acclimate to Harvard’s hockey culture.

“It’s going to be a pretty intensive three-day workshop,” Horton said. “We want to try and replicate [last season] and even take one more step so we can kind of avenge that [Frozen Four] loss.”

The Crimson will certainly be young up front next season after the departure of half of the forward corps, so this brief summer session may go a long way in reloading for 2017-2018.

On the back-end, the team returns five of six defensemen, as Madsen prepares to lead a skilled and experienced blue line. Goalie captains are a rare sight, mainly because they cannot leave the net to confer with referees mid-game—one of captains’ primary on-ice duties. Perhaps this explains why the team preferred a third letter-wearer, but Madsen’s play this past season made a strong case for his earning the “C” regardless.

The Philadelphia Flyers’ 6th round draft choice in 2013 finished the season among the NCAA’s top 15 in both save percentage (.923) and goals against average (2.11). Plus, he boasted the league’s second highest win percentage (.806). Arguably his most impressive feat, Madsen recorded the longest ever win streak by a Harvard goalie.

—Staff writer Spencer R. Morris can be reached at spencer.morris@thecrimson.com