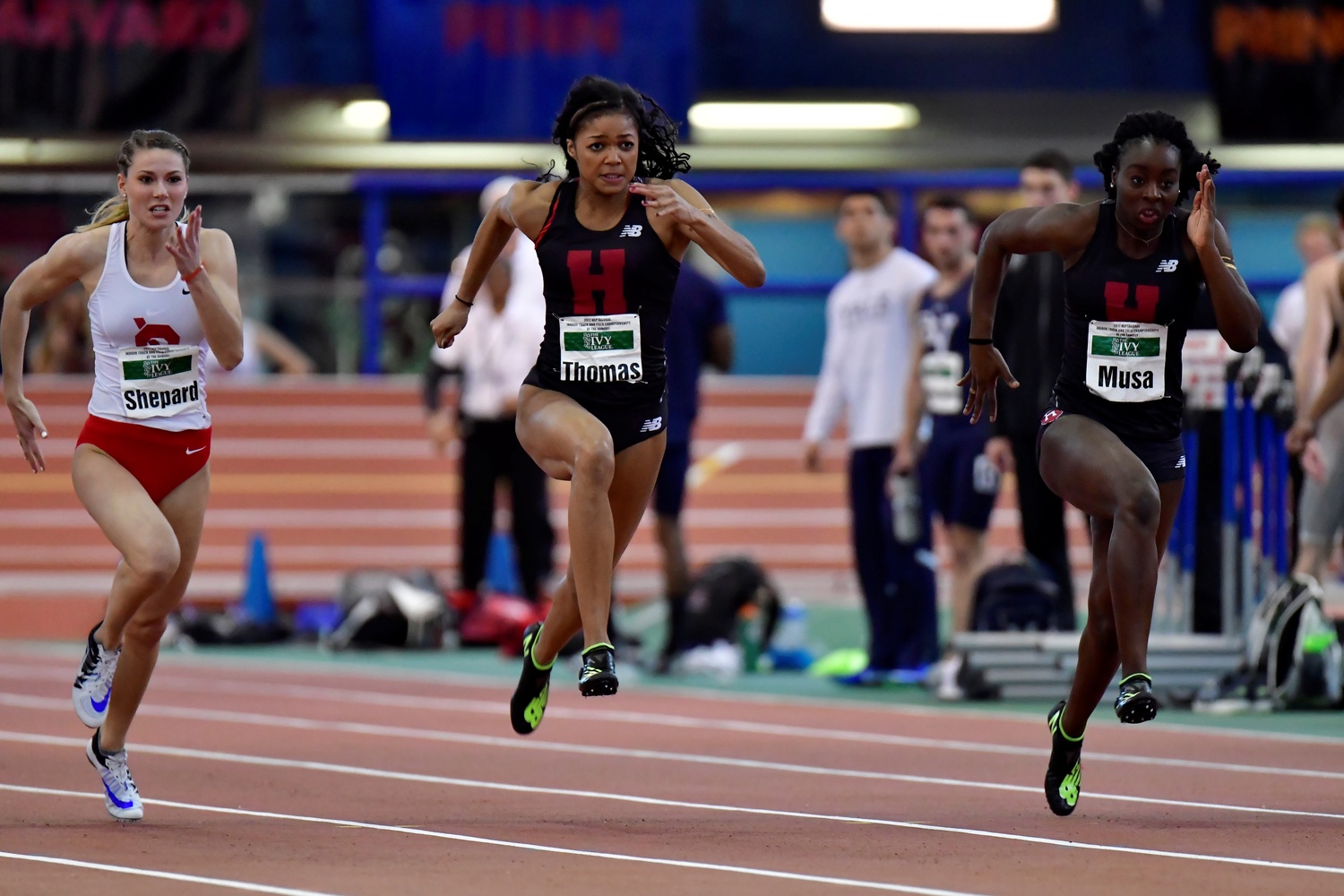 Thomas, pictured here at the NCAA Indoor Track and Field Championships, holds Harvard records in the indoor 60-, 200-, and 300-meter dashes, as well as in the 4x400 relay. The Florence, Mass., native has competed for the podium all outdoor season and even captured the Ivy League's 100-meter record at the Florida Relays. By Courtesy of Harvard Athletic Communications
By Kim Arango, Contributing Writer

Last July, only one Harvard athlete qualified for multiple events at the U.S. Olympic Trials.

Her name was Gabby Thomas. At the time, she was barely finished her freshman year in Cambridge.

“One of my biggest personal highlights was the Olympic trials,” Thomas said. “I’d never had a feeling like it because I [was] surrounded by motivated, inspiring, and amazing people. I could just focus on what I love.”

The performance did not secure an Olympic spot. But it was enough to show that the Florence, Mass., native had developed world-class speed.

In less than two years at Harvard, Thomas has already shattered countless records. In fact, for a couple of weeks this spring, she held a world record for the outdoor 200-meter dash.

Reaching new heights is nothing new for the sophomore. A graduate of the Williston-Northampton School, Thomas still has several high school records to her name.

In those days, Thomas still had an interest in soccer. But by senior year of high school, she had shifted her attention to track. She concluded her final year with school records in the 100-meter dash, triple jump, and long jump. To this day, she holds the the NEPSAC record in the 100-meter dash with a time of 11.74 seconds. Thomas’ triple jump was good for best in Massachusetts while her long jump was both a state-best and the fifth-farthest leap nationally at 40’7”.

Some athletes struggle to acclimate to the collegiate environment—the increased training and new academic responsibilities. But Thomas began shattering records her freshman year. During the first half of 2016, the rookie set the school and Ivy League records in the indoor 60-meter dash as well as the outdoor 100- and 200-meter dashes. Thomas’ accomplishments extend beyond individual efforts, though, as she was part of4x400 and 4x100 teams that set school bests.

Thomas’ non-running interests helped facilitate the jump to college. A neurobiology concentrator, she must take a range of classes across the life sciences. She also belongs to the Association of Black Harvard Women and the Black Student Association.

All that dominance resulted in a spot at the NCAA Outdoor Championships in June. The sprinter had a massive showing then, breaking her own Ivy League and Harvard record with a time of 22.47 seconds in the 200-meter dash. She came away from the NCAAs with a third-place overall finish, as well as a first-team All-American honors for the outdoor event.

“One of my biggest personal highlights was the first time at a national setting last year at outdoor nationals,” Thomas said. “I surprised myself with what I could do in this sport.”

Now in her sophomore year, Thomas has already opened the 2016-2017 season with new wins and records.

As a result, the sophomore became the first Ivy League female to reach the final of the 200-meter dash at the NCAA Indoor Championships. Beforehand, she took second in her heat with a time that was a mere 0.01 off her personal record at the time, 22.88.

However, Thomas is more than the sum of her track results. Despite all the athletic success, Joiner insists, the near-Olympian comes back from each meet as a relaxed college student.

“[She’s] so successful, [and] yet she’s so grateful and humble,” Joiner said. “It’s something that’s hard to do when you’re at her level...being able to come back to college, after national meets and all the events, and still being so chill.”