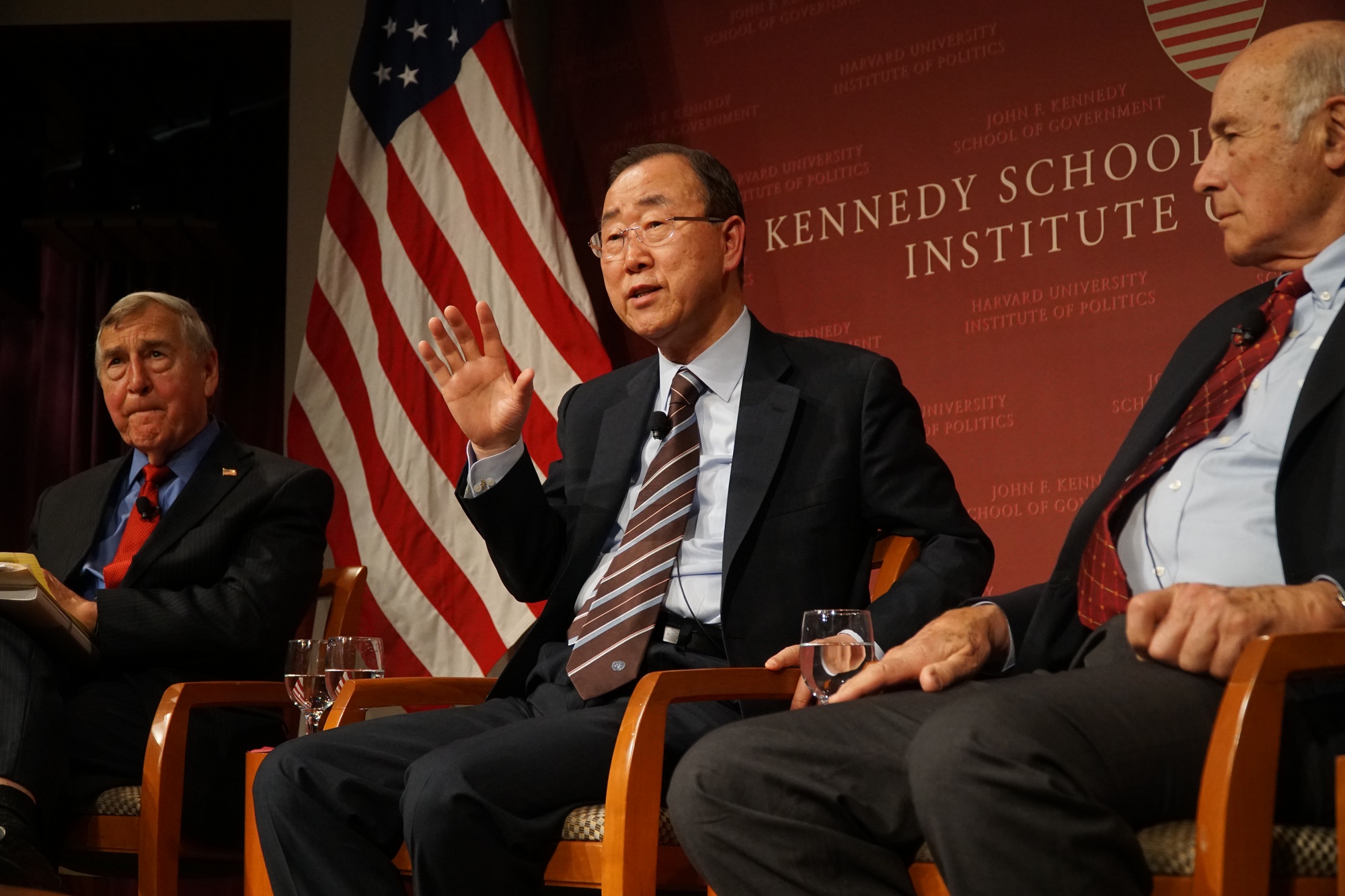 Ban Ki-moon, former Secretary-General of the United Nations, shares his opinions on global issues such as climate change, nuclear weapons in North Korea, and conflicts in Syria. Ban spoke to a full crowd at the Institute of Politics Tuesday.
By Lucas Ward, Crimson Staff Writer 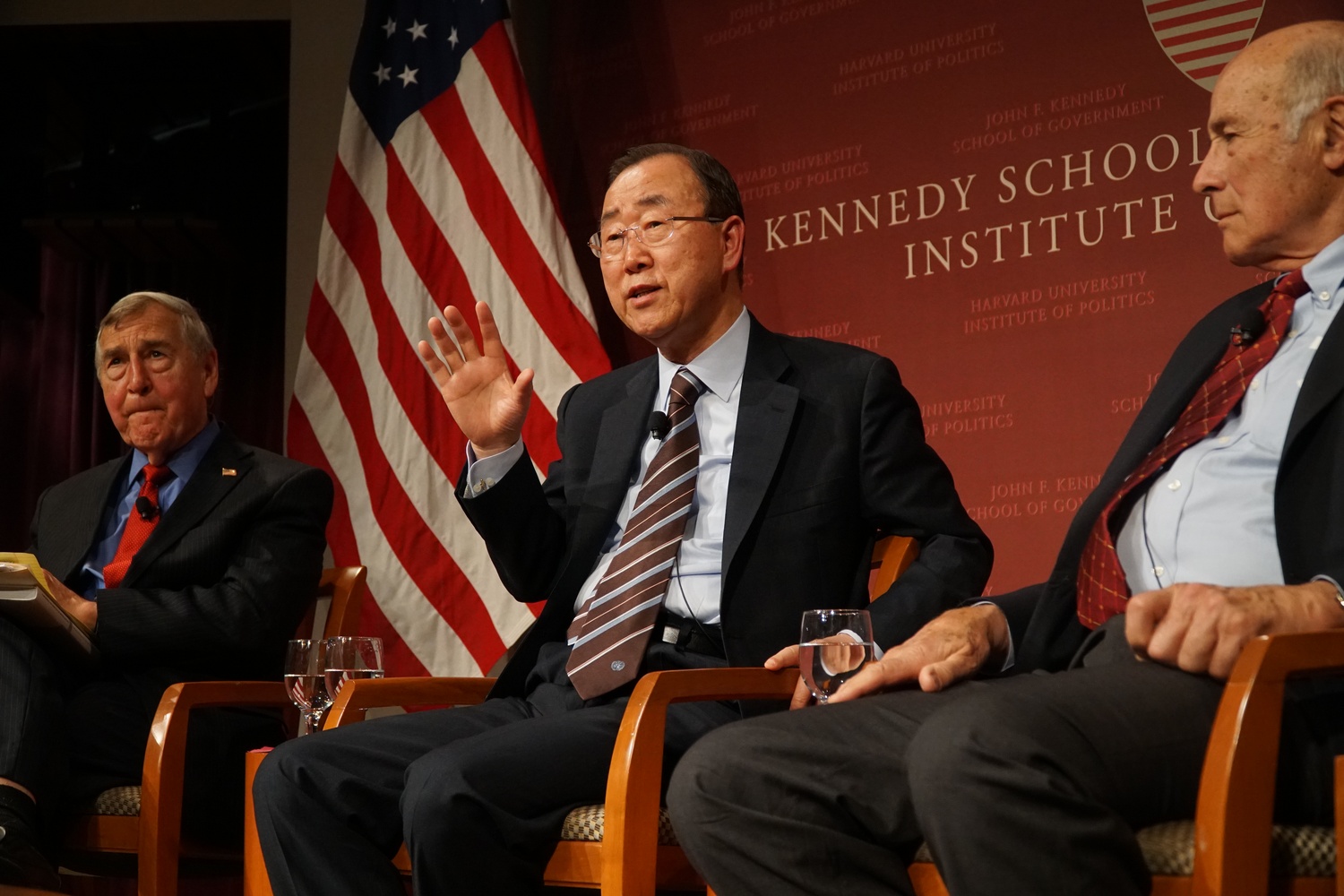 Ban Ki-moon, former Secretary-General of the United Nations, shares his opinions on global issues such as climate change, nuclear weapons in North Korea, and conflicts in Syria. Ban spoke to a full crowd at the Institute of Politics Tuesday. By Ryosuke Takashima

Former Secretary-General of the United Nations Ban Ki-moon reflected on his tenure leading the UN and discussed issues he characterized as of global importance, such as nuclear weapons and climate change, at Harvard's Institute of Politics Tuesday.

Ban, who served as Secretary-General of the UN from 2007 to 2016, spoke at length Tuesday about the challenges that came with his former position. He joked that people often viewed him as a “scapegoat” and as the public face of the UN, and that he finds his new position as a fellow at the Kennedy School to be less demanding.

“Most of the UN staff address me like ‘SG’ instead of Secretary-General because it is too long. At the same time, ‘SG’ stands for ‘scapegoat.’ Whatever goes wrong, that’s all the United Nations Secretary-General’s fault,” he said. “I don’t think many media will be interested in reporting what I will say now, and I am in a much more relaxed position.”

Ban emphasized, though, that he considers the work of the United Nations—an intergovernmental body that mediates global conflicts and has representatives from 193 countries—to be incredibly important. Ban said that the UN helped his family survive in war-torn Korea, where he grew up.

“When I was a boy during the Korean War in [the] 1950s, the United Nations saved my family, my country, and myself,” Ban said.

He also spoke on contemporary issues, such as ongoing conflicts between North Korea and other nations, the threat of nuclear weapons, and climate change.

Ban said he thinks other countries should place economic sanctions on North Korea to eliminate the threat of war with the reclusive nation. On environmental issues, Ban followed other politicians in characterizing climate change as a threat to safety and peace across the world.

“The people in the world seemed to believe we have two planet Earths—but unfortunately we have only one,” he said, adding that he considers mitigating climate change to be one of the most important issues of his time on the United Nations.

“Many leaders failed you, and many leaders are still failing you. Now is the moment for you to demonstrate a new way of approaching global problems, and prove the power of global citizenship for the sake of a common future,” Ban said.

He added that he thinks students should also uphold compassion in their work in public service.

“I think most of you have a lot of passion, strong passion. But I’m asking you, this passion... should be compatible with compassion, respect for others, consideration, compassion for other people.”

Ban recently joined the Kennedy School as an Angelopoulos Global Public Leaders Fellow, and received a Masters in Public Administration from the school in 1985.