In D.C., Faust Calls for Government Backing of Universities 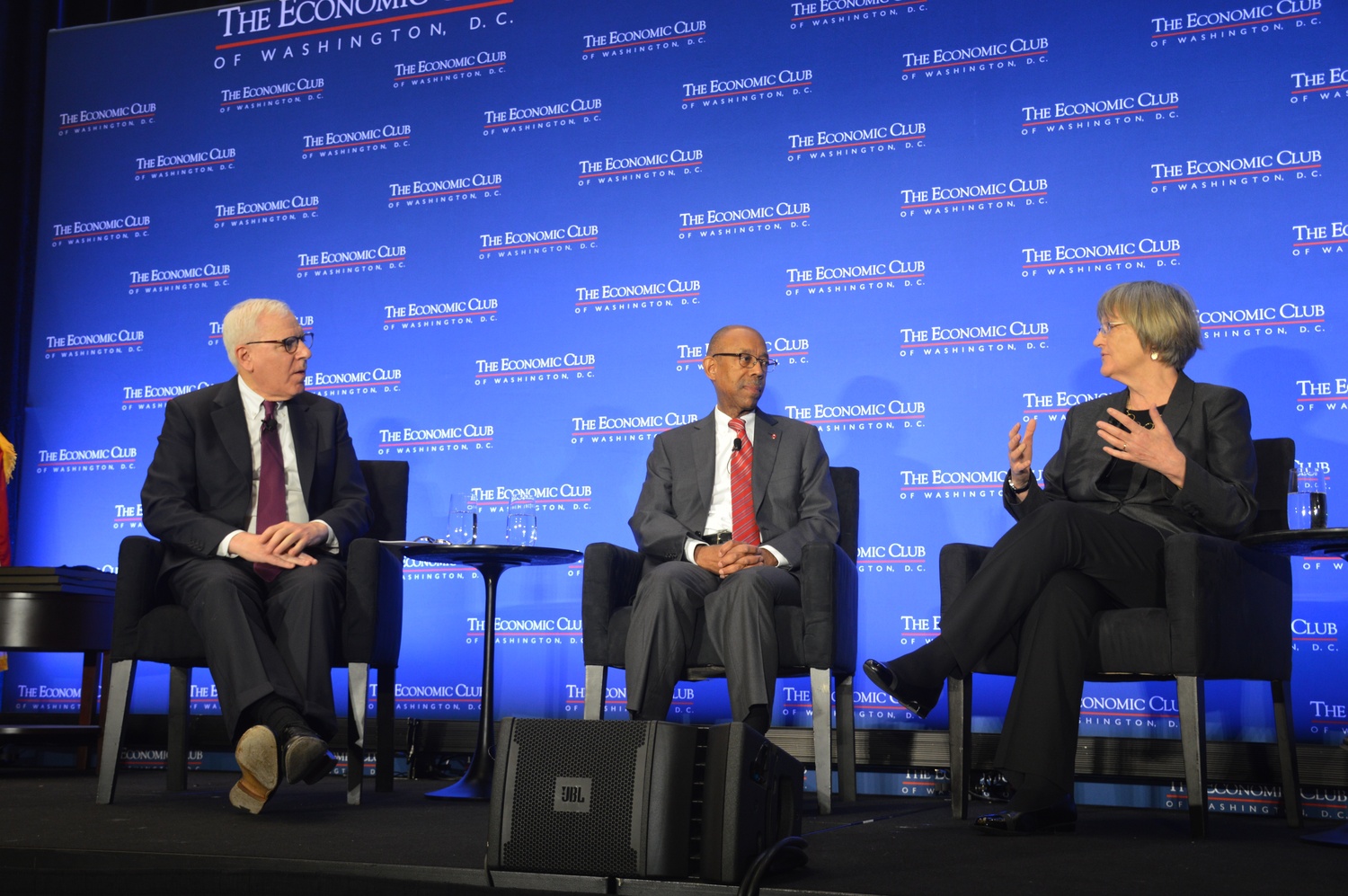 WASHINGTON, D.C.—University President Drew G. Faust said the renown of American universities is “contingent” on continued federal support during a panel discussion with university presidents in the nation’s capital Tuesday.

The trip to Washington was Faust’s third in 2017 and was timed to coincide with the Association of American Universities semiannual meeting of university presidents. Faust attended off-the-record AAU meetings, met with lawmakers, and spoke at the panel hosted by the Economic Club of Washington, D.C.

During the panel, Faust fielded questions from David Rubenstein, a billionaire financier and philanthropist who is president of the Economic Club and the Harvard Corporation’s newest member. She sat alongside Stanford president Marc Tessier-Lavigne and Ohio State president Michael V. Drake.

In an interview after the event, Faust emphasized the importance of government backing for American colleges and universities.

“I hope people took away how important institutions of higher education are within the United States, that they are a kind of gem of American society and of our country, and that they’re not inevitable—that they need to be supported, that there are ways in which they could be at risk if we don’t sustain the values and the value that is inherent in them,” Faust said.

An eclectic mix of roughly 300 people—including university representatives, lawyers, corporate leaders, and ambassadors from places as far-flung as Tunisia and Lichtenstein—gathered for the event in a Marriott ballroom.

Rubenstein’s questions alternated between facetious and serious, as he asked the presidents about issues including admissions, federal policies, and campus sexual assault. Certain questions were tailored for each school—to Faust, Rubenstein asked about the University’s capital campaign and loss of a talented basketball recruit to Duke.

In response to Rubenstein’s question about the most serious challenge facing universities today, Faust echoed Drake’s commitment to balancing “access, affordability, and excellence,” adding that universities must find a way to better publicize that commitment.

“We’re not communicating that effectively to the wider public,” she said. “I think one of our biggest challenges is to explain who we are, and what we do, and why it matters. And that will determine whether we are able to pursue these three goals.”

Support from legislators and philanthropists, Faust said, is essential. She referenced proposed federal budget cuts to scientific research funding as one area of concern for her and other higher education leaders.

Research funding cuts featured prominently in the AAU spring meeting Faust attended on Monday. After that meeting, the AAU released a statement on behalf of the presidents and chancellors of its member universities that issued a dire warning to lawmakers about the impact of the cuts.

“This would cripple our ability to do our part in generating economic growth and providing more jobs for Americans,” the statement reads. “If these cuts are enacted, the partnership that has been reinforced through both Republican and Democratic administrations over the past 70 years could literally collapse.”

Faust said in an interview weeks after the 2016 presidential election that she would be “ramping up” advocacy efforts—a pledge that would mean more trips to Washington. In January and February, she met with lawmakers including Senate Majority Leader Mitch McConnell, Senate Minority Leader Chuck Schumer, and Speaker of the House Paul Ryan. She also wrote an op-ed in the New York Times about the importance of NEH funding.

She declined to comment on which lawmakers she met with during this trip.