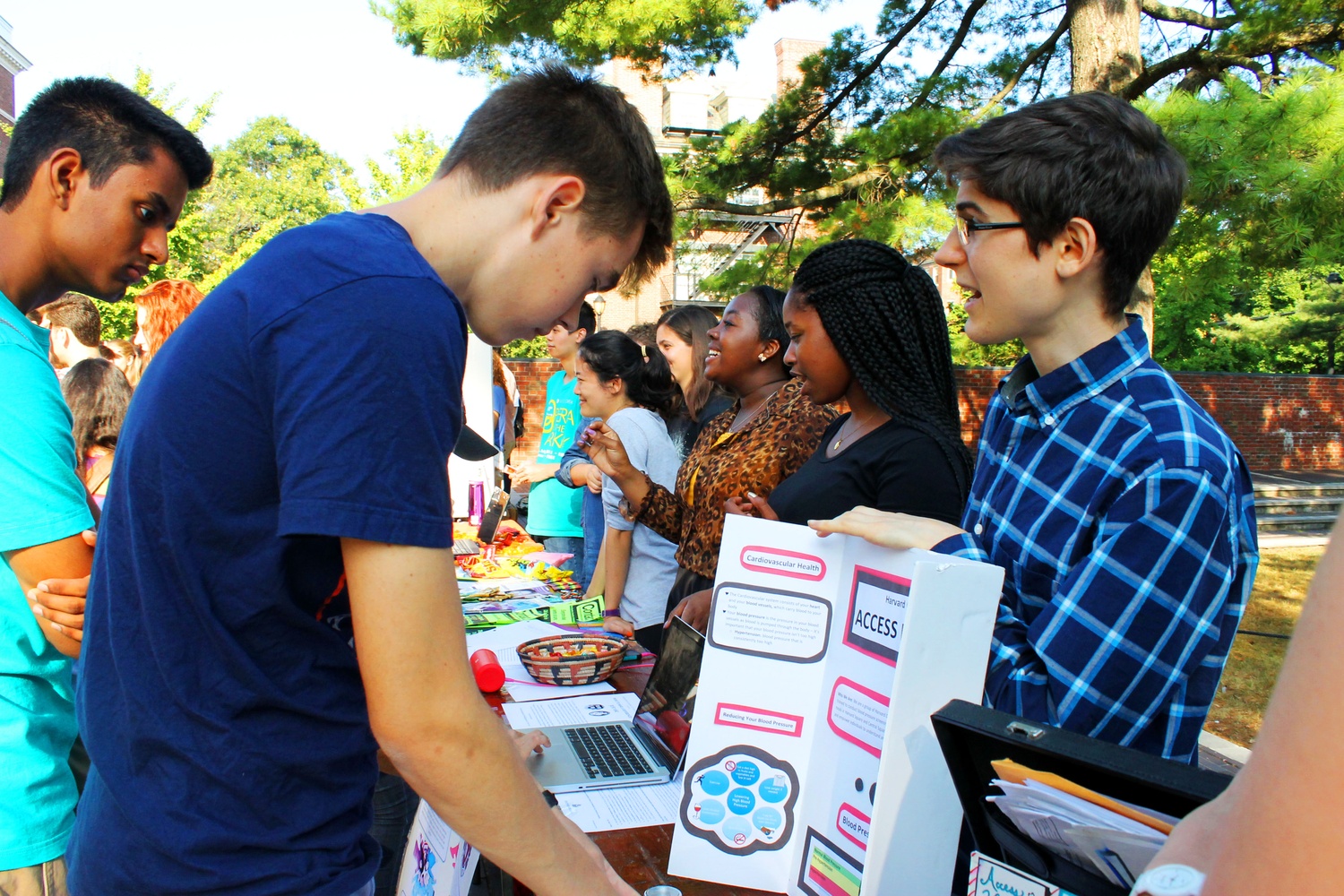 Students talk to representatives and sign up for various clubs on campus on display at the 2015 Activities Fair. By Jennifer Y Yao
By Andrew J. Zucker, Crimson Staff Writer

The Office of Student Life may soon begin evaluating existing student groups for similarities with other groups, an extension of existing efforts to combat redundancy in new student groups.

“I do know for a fact that they’re thinking about trying to align some of the standards of these audits a little bit more with the standards that we are now going to have with new student organizations,” Bonsall said.

If the OSL does take such a step, it will face a sprawling ecosystem of more than 400 student groups on campus, some of which may appear to be similar in scope and purpose.

Harvard Model Congress currently has 6 organizations registered with the OSL, meaning each group is eligible for individual funding. There are four student groups dedicated to Model United Nations and at least 14 a cappella groups on campus.

Both the Harvard College in Asia Program and the Harvard Program Asian International Relations send student groups on trips to various Asian countries every year. Both the Harvard Financial Analysts Club and the Veritas Financial Group offer its members education about the financial industry.

Assistant Dean of Student Life Alexander R. Miller, who could not be reached for comment for this story, previously told Undergraduate Council members that the Office of Student Life will audit student groups every five years. UC Rules Committee Chair Evan M. Bonsall ’19 said the OSL’s audit included looking at whether student organizations updated their governing documents and included active members. In the future, these audits could begin evaluating groups for their similarities with other ones.

Student groups that appear to be very similar in name and stated purpose can still differ. For example, the Debating Union and Debate Council practice different forms of debate, according to Lev B. Asimow ’18, Captain of the Debate Council, though the two could overlap.

“Policy debates are the one that the Debate Council primarily focuses on, although our organizational constitution reserves us the right to time to time compete in...other formats,” he said.

“The one thing we do is they host the big high school tournament that Harvard hosts in February and we help with that, so we do have some coordination,” he said.

However, he said the two groups “would never merge organizations.”

Despite the new regulations, Bonsall said he does not see the new policy as cracking down on new student organizations. Bonsall said that some new student groups may be approved even if they do bear some similarities to existing ones.

“If that new branch or new chapter...is sufficiently distinguishable and is serving a different purpose or different group of students or a different specific interest area, then I wouldn't see any reason why we would on those grounds alone deny them the right to become a new student organization,” he said.

“I think that we’re going to err on the side of not preventing people from forming organizations,” Bonsall added.