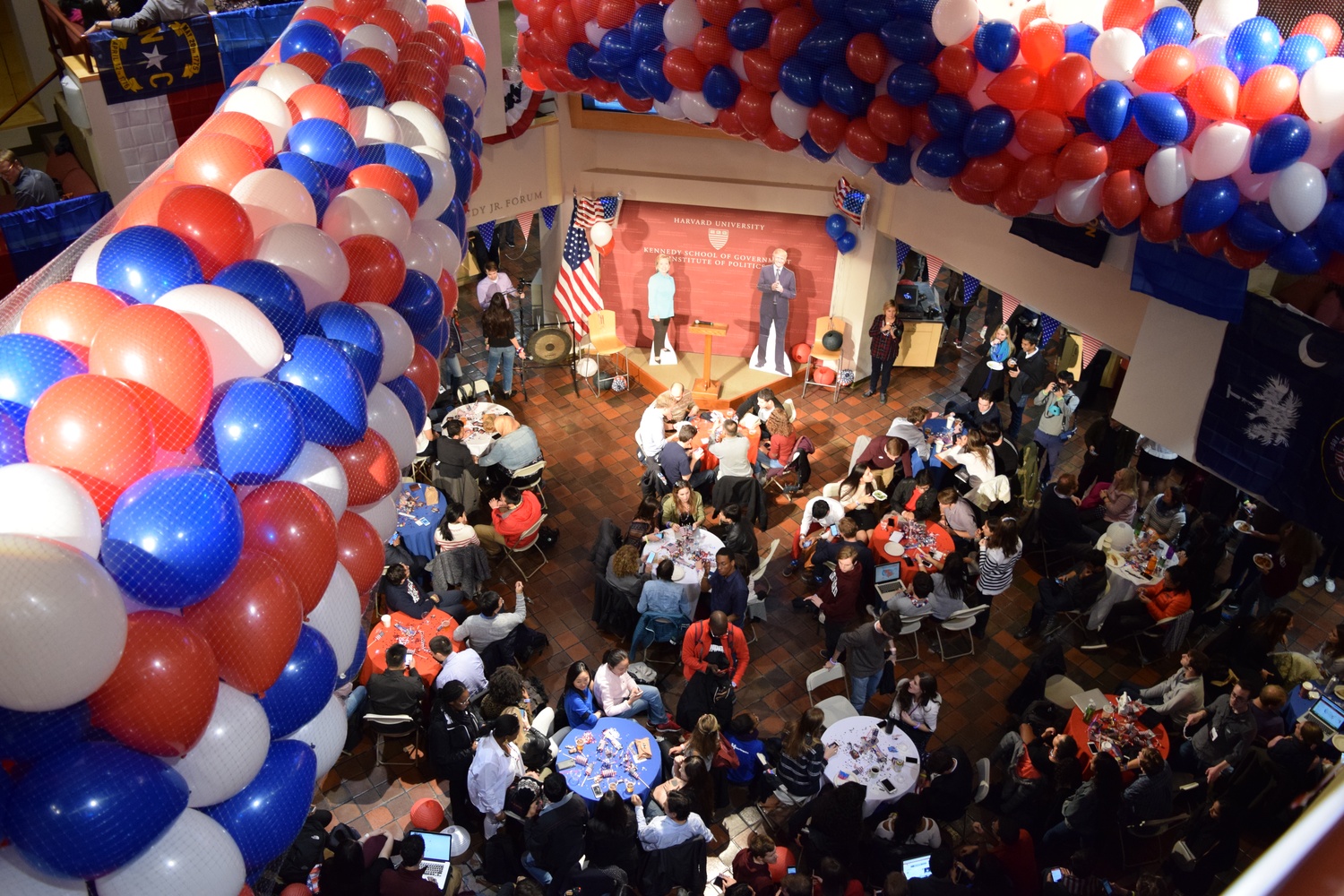 The Institute of Politics on Election night in November. By Jessica M. Wang
By Lucas Ward, Crimson Staff Writer

A new Institute of Politics poll found that just 32 percent of 18-to-29-year-old Americans approve of President Donald Trump’s performance in the White House.

That statistic, part of the IOP’s biannual Public Opinion Project poll, locatesTrump's approval among young people well below the average approval rating, which Fivethirtyeight places at 42 percent. The Spring 2017 poll is the first since Trump’s inauguration, and outlines young Americans’ views on his administration's policies, as well as their attitudes towards politics and civic engagement writ large. The IOP surveyed over 2,500 18 to 29-year-olds.

In addition to gauging overall approval of the President’s performance, the poll surveyed young people on specific policy areas such as Trump's handling of the economy and efforts to combat ISIS, for which approval ranged in percentages from the high 20s to mid 30s. The poll also found that 68 percent of young people find Trump’s use of Twitter “mostly inappropriate.”

Released Tuesday, the poll also questioned young people on broader socio-political questions. Fifty-nine percent of young Americans said they want to “do what they can to help unite and not further divide the country”, a finding that was shared regardless of party identification, gender, race, and geography.

“While we spend a lot of time talking about what divides us, younger millennials are seeking leaders who will unite us,” said John Della Volpe, Director of Polling at Harvard Kennedy School’s Institute of Politics.

Although the percentage of young people who disagreed with the statement that “politics is not relevant to my life right now” has increased from 40 to 47 percent, the proportion of young people interested in public service dropped from 31 to 25 percent.

On average, 9 percent of 18-29 year olds expressed interest in pursuing some kind of public office between now and when they turn 50. The percentage is higher for third party voters at 19 percent, and slightly higher for men at 11 percent.

The poll indicated that levels of trust in elected officials have remained low. The most trusted governmental entities in 2017 according to the poll are the U.S. Military, at 50 percent, with Congress earning the lowest trust ratings at 20 percent. The trust of young people in the President declined from 41 percent to 24 percent compared to 2012, according to the poll.

The poll also indicated that young people are wary of the media they consume. The poll found that Snapchat and Instagram were the most rapidly growing social networks among young people. Respondents reported that they thought almost half of their Facebook newsfeed constituted “fake news.”

The poll found that the best predictors of a young person’s political party are his or her views on race, health care, and guns. Over half of responding Democrats did not know a gun owner, and almost half of Republicans disagree that healthcare is a basic human right.