Harvard, Minnesota-Duluth to Meet at Frozen Four in Chicago

With a spot in the national championship game up for grabs, the Crimson and Bulldogs will do battle Thursday at 6 p.m. 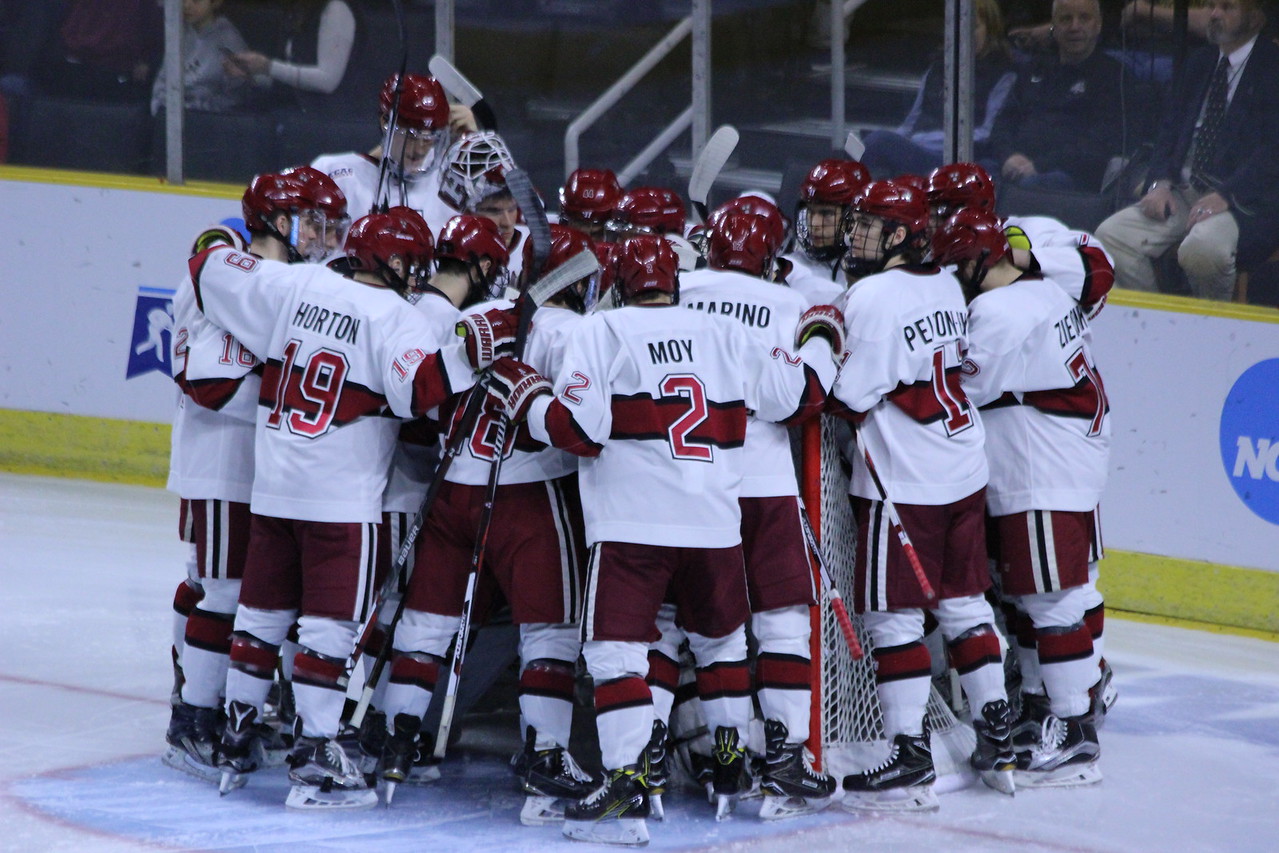 Making its first Frozen Four appearance since 1994, Harvard heads to Chicago with the longest winning streak in the nation at 16 games. A win Thursday night would move the Crimson into the national championship game. By Thomas W. Franck
By Jake Meagher, Crimson Staff Writer

Peering up the stairs of the Bright-Landry Hockey Center, Devin Tringale feasted his eyes upon a foreign spectacle. Readily equipped with cameras and microphones, every major news station from the Greater Boston Area awaited Tringale’s arrival upon the top step, eager to interview the captain from the last college hockey team still standing in the Commonwealth.

“Had to Snapchat it,” quipped senior forward Luke Esposito. “It’s just been pretty incredible all around.”

This flood of attention did not crash upon the Bright by accident on Wednesday. A spring spotlight has been cast in the direction of Cambridge because for the first time in decades, the Harvard men’s hockey team has a game to play in the month of April—perhaps even two.

After hanging on by a thread—alternatively known as goaltender Merrick Madsen’s left pad—in the East Regional final last Saturday against Air Force, the Crimson ensured that its 2016-17 campaign would continue into Chicago. With 3-0 and 3-2 victories over Providence and Air Force at the Dunkin’ Donuts Center, No. 2 Harvard (28-5-2, 16-4-2 ECAC) captured a spot in its first Frozen Four since 1994—a year that predates the creation of the “Frozen Four” label itself.

Making its 13th appearance in the national semifinals, the Crimson will play in the first of two contests Thursday evening (6 p.m. EST) at the United Center, the home of Chicago’s Blackhawks and Bulls. Harvard possesses a measly 3-9 record in the semifinals dating back to 1955, but this time around, the Crimson will enter the potential penultimate game of its season hotter than ever. Harvard is currently riding an 18-game unbeaten streak and a 16-game winning streak—both program-bests.

The Crimson’s dominance over the course of these streaks has not gone unnoticed. In the 18 games since Harvard’s last loss back on Jan. 17, the Crimson ranks first in the nation in scoring offense with 4.22 goals per game and third in scoring defense with 1.67 goals allowed. Harvard has also trailed only once during that span—and for less than seven minutes—to teams not from New Haven, Conn.

“Everything just started blending in,” said senior Tyler Moy, commenting on the evolution of the team’s attitude during the streak. “It became a culture of just winning, and it felt good. It was just like we expected to be winning. You walk a fine line between confidence and cockiness, and I think we’ve done a great job of that, maintaining a humble outlook on everything and recognizing the fact that...you can’t take an off night.”

“I think we’ve become well aware of how good we are and the opportunity that we have,” Moy added. “And I think all of the guys in the locker room don’t want to pass up an opportunity like this. Because who knows when it’s going to come around next.”

While there’s no denying that Harvard will enter the Frozen Four as the hottest team in the country, the Crimson’s first opponent at the United Center is right on Harvard’s tail. Minnesota-Duluth, ranked second in the PairWise and third in the polls, heads into Chicago having gone 15-1-3 over its last 19 contests.

Now winners of seven straight—good for the second-longest streak in Division I Hockey—the top-seeded Bulldogs (27-6-7, 15-5-4 NCHC) get set for the Frozen Four having survived the tournament’s most difficult regional by the skin of their teeth, edging Ohio State and Boston University out in Fargo, N.D., by identical 3-2 overtime score lines.

“We have a great amount of respect for Minnesota-Duluth,” Harvard coach Ted Donato ’91 said. “They’re a team that’s year-in, year-out tremendously successful. They have a great balance. They’ve gotten great goaltending, they have a good mix of size and skill, and they just go about their business winning hockey games.”

Donato also acknowledged that he considers UMD head coach Scott Sandelin to be “amongst the best in the country.” With one national championship in 2011 already under his belt, Sandelin—now in his 17th season behind the Bulldog bench—will be looking to add another in his third trip with UMD to the Frozen Four.

This year’s Bulldog team is led by senior forward Alex Iafallo, who is currently riding a 13-game point streak and also leads UMD in both goals (19) and assists (30). In addition to the senior who has already doubled his point total from a year ago, the Bulldogs have three more skaters—all underclassmen—in 30-point territory: sophomore Adam Johnson (18 G, 19 A), freshman Joey Anderson (11 G, 23 A), and second-year d-man Neal Pionk (7 G, 26 A).

Meanwhile after winning a three-way goalie competition in the preseason, freshman netminder Hunter Miska ranks second in the country with 26 wins, behind only Madsen, who’s been named the Most Outstanding Player in two consecutive postseason tournaments—the ECAC playoffs and the East Regional. Yet, Miska has actually gone slightly longer than the Crimson’s veteran netminder since taking a loss—the rookie hasn’t received an L on the stat sheet since Jan. 13.

Nonetheless, while Miska’s numbers are certainly solid, he ranks only 17th in both save percentage (.919) and GAA (2.21). The freshman’s consistent presence in the win column can largely be explained by the Bulldogs around him that have helped UMD finish among the top 10 in both scoring offense (3.40) and scoring defense (2.27).

With perhaps Harvard’s toughest opponent on deck, Donato remains glued to his season-long approach. Rather than worry about Duluth, the 13th-year coach said that the Crimson intends to “focus on what [Harvard] brings to the table.” Esposito added that it’ll be important for the Crimson “not to be swallowed up by the moment,” but he doesn’t expect that to be a problem given Harvard’s already faced similarly high stakes in the Beanpot final.

If the Crimson does in fact come away victorious Thursday night, Harvard would earn a chance to play for a national championship Saturday night against either Denver, the tournament’s top overall seed, or fourth-seeded Notre Dame, the champion of the Northeast Regional.

“We don’t want this to be our last game,” Tringale said. “We think we have two more games and that we can do it all. We don’t want to get complacent right now.”

“I think all the guys in the locker room recognize the fact that this is something larger than ourselves and larger than our team,” Moy said. “It spans the entire institution and in a sense, even the city of Boston.”

“Once we get there, we’ll take it one game at a time,” Esposito said. “But...if we could get two wins this weekend, it’ll change the rest of our lives.”