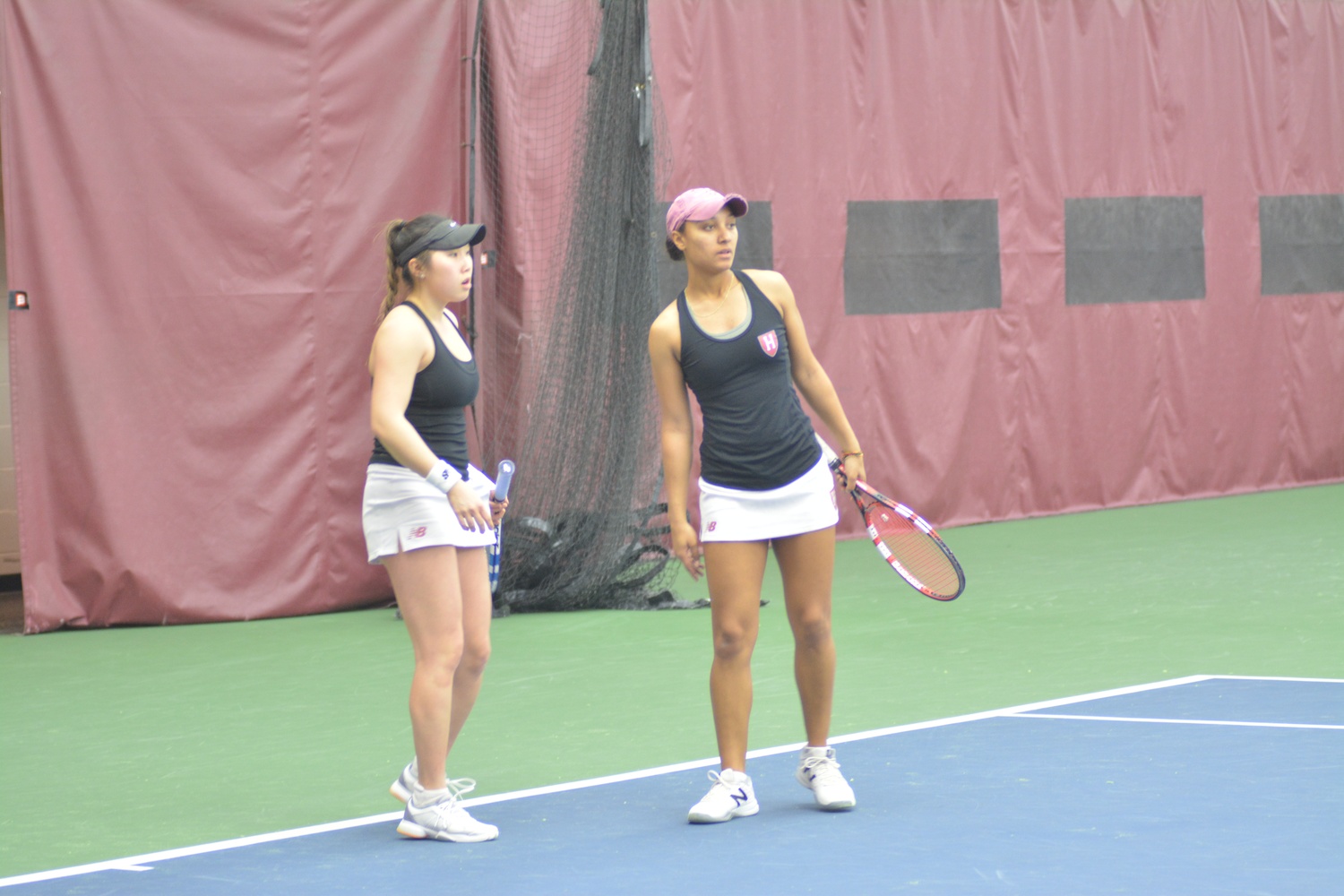 Captain June Lee and sophomore Erica Oosterhout, pictured here against Bryant, fell in doubles action but both picked up singles win in the Crimson's 4-3 win over Dartmouth on Sunday. By Kirstin E. Anderson
By Stephen J. Gleason, Crimson Staff Writer

Before Sunday, the last time that the Harvard women’s tennis team had won its Ivy League opener sophomore Erica Oosterhout was a freshman in high school. Oosterhout played a major role in ending the streak as the Crimson topped No. 44 Dartmouth in a hotly contested showdown at the Murr Center on Sunday.

Harvard (13-6, 1-0 Ivy League) had waited nearly a full year since its last spring Ivy League contest—a 5-2 loss to the Big Green (12-3, 0-1) to end last season—before the contest got pushed back an additional day due to Saturday’s snowstorm.

“We were really excited to finally start our first Ivy League match of the season,” Harvard coach Traci Green said. “We had a lot of anticipation that was building up. We had a lot of nerves in the beginning during the doubles that contributed to our slower start, but I’m really proud of the way that we bounced back in singles and really showed our dominance.”

In a back-and-forth match, it was only fitting that the result would come down to the showdown between each team’s top singles player. Oosterhout, who was dominant at times during her team’s nonconference slate, took on Dartmouth co-captain Taylor Ng, a senior who has had her fair share of success against the Crimson.

The Haddonfield, N.J. native entered Sunday’s match carrying a perfect singles record against Harvard, with her team having won all three matchups during her time with the Big Green. Despite Ng’s experience and success against the Crimson, Oosterhout proved to have the upper hand.

A tightly contested first set went to Ng, 7-5, but her opponent did not appear flustered. Oosterhout had won five of her last six singles matches before Sunday, with the two most recent contests going to a third set. After losing seven games in the first frame, the Tampa native would go on to drop just six the whole rest of the afternoon, roaring back for a 5-7, 6-3, 6-3 victory that gave Harvard its first win over Dartmouth since 2013.

While the Crimson picked up the clincher from Oosterhout, the team’s captain and most experienced player also picked up a key win at No. 2, with the point coming in much more dominating fashion. Captain June Lee, who had lost in all three of her previous singles matches against the Big Green, broke through on Sunday against fellow senior and Dartmouth co-captain Jacqueline Crawford.

“Playing Dartmouth is always a battle,” Green said. “They’re always well-prepared and we knew going in that it was going to be tough. I’m just proud of the way June and Erica stayed composed. It’s very important for your top players to really remain composed throughout the match. It really helps the players down below when everybody thinks that the match is under control.”

Lee and Crawford squared off as freshmen, with the latter capturing the victory at the No. 3 spot with a 7-6, 4-6, 6-4 win in Hanover after Lee cramped up while leading 4-1 in the third. It was Lee, however, who got the last laugh in what was likely the final matchup between the seniors.

“I remember that freshman match very, very well,” Lee said. “I’ll never forget that. I’m definitely way fitter than I was when I played her my freshman year. I’ve been working on being more aggressive, coming up to the net more, stepping in on short balls, and going in for riskier shots that I used to be scared to go for. I think that made the big difference.”

After the first set went to a tiebreak—which Lee took, 7-5—the only senior on Harvard’s roster cleaned up in the second frame, sending Crawford back to the New Hampshire backwoods with a 6-1 defeat.

“June came out on fire today,” Green said. “I was quite excited to see her step on the gas, something we’ve been talking about at practice, how we should really close the door on our opponents.”

The two singles wins for Oosterhout and Lee were redemption for the pair, which teamed up as the Crimson’s top doubles duo. After struggling in doubles play early in the year, Harvard appeared to have bucked the trend just in time for the start of Ivy League play.

The Crimson had won eight of its last nine doubles points dating back to February. However, on Sunday, it was not to be. Ng and junior Kristina Mathis topped Lee and Oosterhout, 6-2, the duo’s worst loss since Feb. 12.

“They definitely came out a lot stronger in doubles, so we need to work on getting a stronger start and being more aggressive from the beginning,” Lee said. “We knew that singles would be a tough fight and everyone fought to the end and knew that we were somehow going to be able to come out with four singles points.”

The doubles point went to the Big Green after the Crimson’s freshman duo of Natasha Gonzalez and Irene Lu was ousted by Julia Schroeder and Racquel Lyn. Gonzalez and Lyn both graduated from Houston high schools last spring, with Gonzalez captaining the best St. John’s School team since 2009 and Lyn winning four consecutive state singles titles without dropping a set while at St. Agnes Academy.

Mathis and Lyn had the distinction of being the only two players on either team to win both their singles and doubles matches. Playing at third singles, Mathis topped Harvard freshman Lexi Milunovich, 6-2, 6-3. It was the first match for Milunovich since Jan. 28 as the New Canaan, Conn. native has been battling injuries.

Despite the loss, Milunovich being in the lineup was a step in the right direction for the Crimson. The freshman was the top-ranked member of Harvard’s 2016 recruiting class and was listed as the No. 20 prospect in the country, according to the Tennis Recruiting Network.

“As the rest of the season progresses, she’s just going to start getting more and more comfortable playing her game,” Lee said. “I think that’ll be good and it’s nice to have her back and playing. Hopefully, that just helps everyone on the rest of the lineup.”

Lyn edged junior Annika Ringblom in one of only two three-set singles matches on the day. The first-year sandwiched a 6-2 loss between 6-3 and 6-4 victories at the fourth singles spot. The win by Lyn was one three singles points won by freshmen.

Like Lee and Oosterhout, Lu and Gonzalez were both able to bounce back from their doubles loss earlier in the day. After falling to Schroeder in doubles, Lu took care of business at No. 4 singles, picking up a straight set victory over the junior. Gonzalez followed suit at No. 6, topping fellow Texas freshman Chuyang Guan, 6-4, 6-4.

The win was a big one for the Crimson not only because it was the first time that it had won its Ivy opener since 2012 but also because Harvard beat a Dartmouth team that tied for second in the conference a year ago and was the highest-ranked Ancient Eight team entering the weekend, according to the Intercollegiate Tennis Association’s rankings.

“I’m obviously very, very happy since I’ve never experienced this since I’ve been at Harvard,” Lee said. “I think it’s really going to build our confidence. It’s really tough losing the opener because you know you’re still in it, but it’s tough knowing that you’re already starting from behind so we’re feeling really good about getting this first win.”