The Transformation of Harvard Square 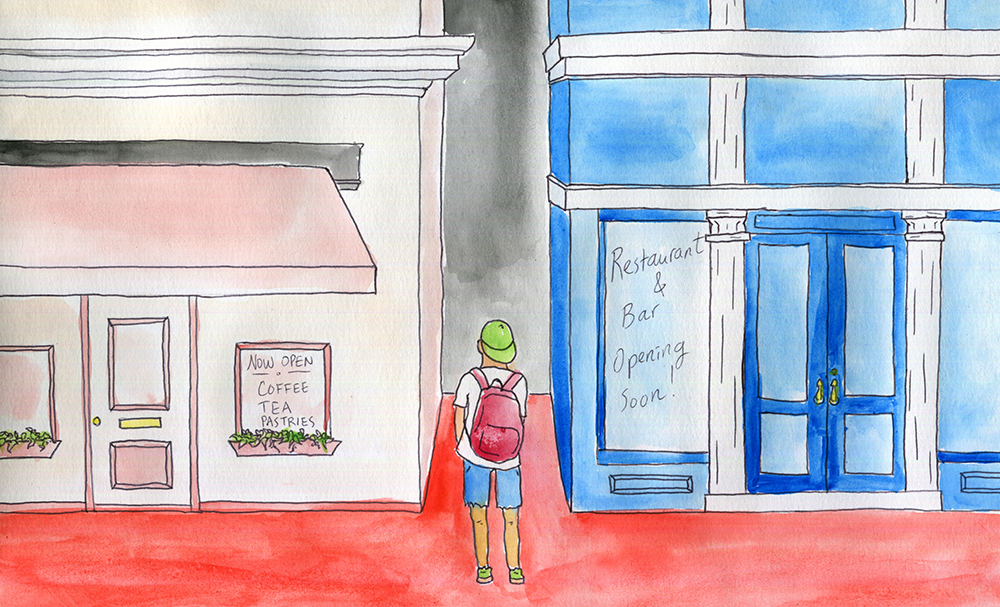 As far as transformative experiences go, Harvard Square has had a remarkable one. Over the past few years, newer and more expensive businesses have slowly taken the place of older, more affordable establishments.

Of course, stores, restaurants, and shops routinely go out of business and are replaced. This is not a new phenomenon—it is the natural result of any commercial location. More worrying is the trend: a Harvard Square that caters to a more affluent clientele, one composed of tourists and students with money to spend.

Unfortunately, this disproportionately impacts the lives of Harvard students who come from low-income backgrounds and who do not have the money to patronize these businesses. Some students find themselves shut out from restaurants that become off-campus social spaces, furthering the socioeconomic divides already present in the student body.

THE CHANGING FACE OF HARVARD SQUARE

Over the past year, affordable locations have given way to expensive alternatives: Frozen yogurt store Pinkberry became Pressed Juicery, a cold-pressed juice bar. Panera Bread was replaced by Tatte, a European-style bakery. The Crimson reported in February that upscale Amorino Gelato is looking to purchase a storefront on JFK Street. Blue Bottle Coffee, a cafe specializing single-origin coffee, announced its arrival in the Square last December; one undergraduate described the news “yet another bougie addition to Harvard Square.”

Some Harvard students have wholeheartedly embraced this change, with lines at Tatte out the door (especially during the HUDS strike last fall). Not everyone can enjoy these new food spots, though, and the enthusiasm of some students towards these expensive eateries puts more pressure on their less wealthy peers to seem content with the change.

Harvard Square is becoming a popular location for internationally renowned restaurant chains, but not without a price. Increased demand for storefronts has put pressure on unique establishments with decades of history in the Square. In September of 2016, the world’s only Curious George store narrowly avoided threats of eviction for the sake of remodeling its prime real estate. This February, Crimson Corner, a 54-year-old family-owned fixture, was forced to relocate to a different location in favor of a Washington-based made-to-order pizza eatery. The 161-year-old foreign language bookstore Schoenhof’s shuttered its doors in March, citing high rents.

The Square is known for its historic nature, but many key features of the area cannot withstand the monetary pressure that developers and national chains bring. Though the Cambridge City Council passed several resolutions reaffirming its and its constituents’ dedication to preserving Harvard Square’s historic character, that is difficult when rising rents and exorbitant land values force out businesses that are decades-old mainstays in favor of trendy coffee shops.

There is undoubtedly a great tension between Harvard Square’s historical ties and commercial interests. The University attracts numerous tourists every day, and often they seek high-end food to supplement their sightseeing. Cambridge as a whole is also undergoing gentrification, as are many other areas of Boston, so Harvard Square is not necessarily an outlier. And as we have opined in the past, development in the Square must always be a compromise between increasing economic opportunities and a commitment to the historic significance and affordability of the area. There is a way of imagining the future of the Square and its restaurants while conserving critical pieces of its long, expansive past.

THE IMPACT ON STUDENTS

The upward trend of prices for lunch in the Square mark an undeniable social burden on less wealthy Harvard students who have less disposable cash to spend. The result is that they cannot join friends for meals outside of dining halls.

This is not merely an issue of affordability but also one of general food accessibility. Many Harvard affiliates do not have access to dining halls provided by the College—namely graduate students—and for them, affordable, substantive food is hard to come by around campus. There are no major grocery stores in the Square, and very few locations sell ingredients and staple foods. The Department of Agriculture has classified Harvard Square as a “low-access” food zone.

This does not merely affect graduate students, however. Undergraduates who live on campus have spoken of the difficulty of purchasing affordable, fresh, and nutritious foods, and this problem only worsens when dining halls are not available during breaks. During the most recent Spring Break, for example, low-income students were offered a stipend for dining options in the form of Crimson Cash, which is usable at relatively few nutritious and affordable locations. A more homogenous and upscale Square thus provides little flexibility for many low-income students.

These issues are exacerbated by the growth of expensive, exclusive businesses around Harvard Square that raise questions about the future of the area. The Square is inextricably linked to the image of Harvard as well as the realities of it. It is a commercial area that serves two very different groups of people—the students who attend Harvard and live on the surrounding campus as well as the tourists from across the world who visit it.

Sadly, the increasing presence of expensive stores benefits neither. As historic locations are replaced by bourgeois chains, Harvard Square loses the unique charm that sets it apart and in part attracts tourists.

Moving forward, the administration must recognize that concerns of affordability in the Square are relevant to the student population. Initiatives from the College like the new start-up grant for freshmen—a stipend to those whose families $65,000 or less—are a helpful start.

More is needed, however, starting with an expansion of the program. Right now, it is a pilot that is only guaranteed to freshmen until the Class of 2022. It also applies solely to freshmen, yet the struggles of low-income students do not disappear when they move out of the Yard. Finally, we would encourage the administration to reconsider the monetary threshold to include more students, a critical step in supporting students who fall just above the $65,000 line.

We believe the solution cannot rely solely on the administration, however. Though they have steps to take, part of the responsibility falls on the student body. Undergraduates must be cognizant of their peers’ financial situation when making lunch plans or setting up meetings for an organization. Students could opt to eat in a dining hall, for example, rather than a coffee shop with $5 espressos. By practicing empathy and sensibility, individuals can take action to help curb the class-based divisions that an increasingly expensive Harvard Square may bring.

The transformation of Harvard Square in recent years is clear, and it is highly likely that this trend towards expensive eateries will continue. This change impacts the everyday lives of low-income students at Harvard, and we believe it is necessary for the administration to help support these students. As Harvard Square becomes defined by trendier and more upscale stores and restaurants, it is important that all Harvard students still feel comfortable on their campus. We can all do our part to keep up with the cycle of changing storefronts that is beginning to characterize the once historic Harvard Square.