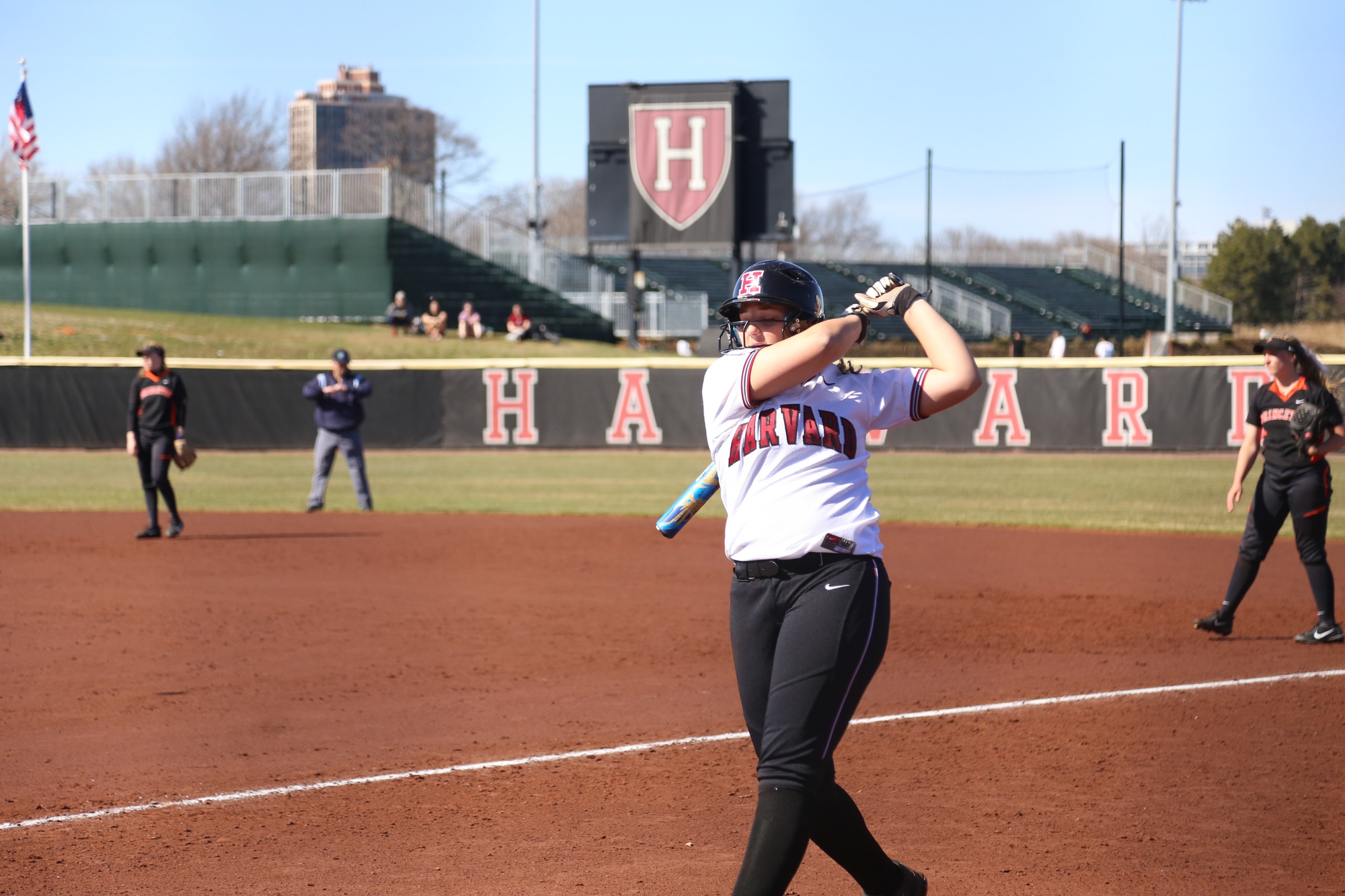 Pitcher and first baseman Olivia Giaquinto is only a freshman, but in her first year, the player has delivered great power to the Crimson from the batter’s box and the pitcher’s mound. Over the weekend, Giaquinto went 7-of-12 as Harvard clinched a spot in the Ivy League Championships. By Ryosuke Takashima
By Jack Stockless, Crimson Staff Writer

With four games left in its season and a playoff appearance on the line, Harvard counted on contributions from its entire team to sweep Dartmouth and win the Ivy League North Division this past weekend.

Perhaps no player in Crimson was more valuable than freshman pitcher and first baseman Olivia Giaquinto. In the final series of the season, Giaquinto flashed signs of brilliance both at the plate and on the mound to be named this week’s Athlete of the Week. The freshman also earned the Ivy League Rookie of the Week award.

“She did great,” said junior right fielder Maddy Kaplan. “She stepped up for us a couple of times here and really just came into her own and just looks really confident at the plate and on the mound, so I’m really happy for her.”

Along with sophomore third baseman Erin Lockhart, Giaquinto was a constant power threat throughout the series. Of her seven hits, which came in just 12 total at bats, five went for extra bases.

Three of those extra base hits were three-run home runs, and two came in consecutive innings in Harvard’s playoff-clinching game. These homers proved crucial, as they gave the Crimson the lead and provided insurance runs for pitchers Katie Duncan and Taylor Cabe. The other big fly was crucial in Harvard’s first win of the weekend, as her three-run bomb provided the Crimson an early lead in what eventually culminated in a close 7-6 victory.

“She was really a hot bat, really dialed in,” Allard said. “It was tremendous how she made adjustments and how she figured out how to get to contact, and she’s just got such good power. She hit a couple home runs against Yale, but this was the most consistent I saw her swing her bat in a series.”

After Harvard clinched an appearance in the Ivy League Championship Series against Princeton, the team still had one contest remaining in the regular season. Allard tabbed Giaquinto with the start, and she delivered her most electric performance of the year in the circle. The freshman perplexed the Big Green’s hitters through four shutout innings, allowing just four baserunners in the process.

“Olivia has gotten some innings for us before,” Allard said. “She’s done a good job for us in the circle. It was nice to start her and have them see somebody different.”

Making the adjustment from high school to college softball is no easy task. Only the best softball players make the jump from high school ball to play for Division I programs, so accordingly even the best college freshmen must go through periods of transition.

Making such an adjustment while at the same time being expected to provide immediate value on offense, in the field, and in the circle is exponentially more difficult. However, Giaquinto has been up to the task this season.

“We’ve put a lot on her with needing her bat in the lineup and having her play first, and then again with the injuries to our pitching staff having her get loose and be ready and available,” head coach Jenny Allard said.

After sophomore reliever Sarah Smith was lost to injury, Giaquinto had to step up as the primary bullpen option behind the duo of Cabe and Duncan. Couple her newfound pitching responsibilities with her routine appearances at first base, and Giaquinto all of a sudden had a lot on her plate for a rookie.

In the circle, Giaquinto made four starts and four relief appearances. She had two outstanding starts, one of which was the final game against Dartmouth. The other came versus Longwood at the Long Beach State/Fullerton Tournament. In that game, Giaquinto fired 4.1 innings of one-run ball, allowing two hits and striking out two.

“Her grit and work ethic is terrific, and she just goes out there and she does everything she can do,” Allard said.