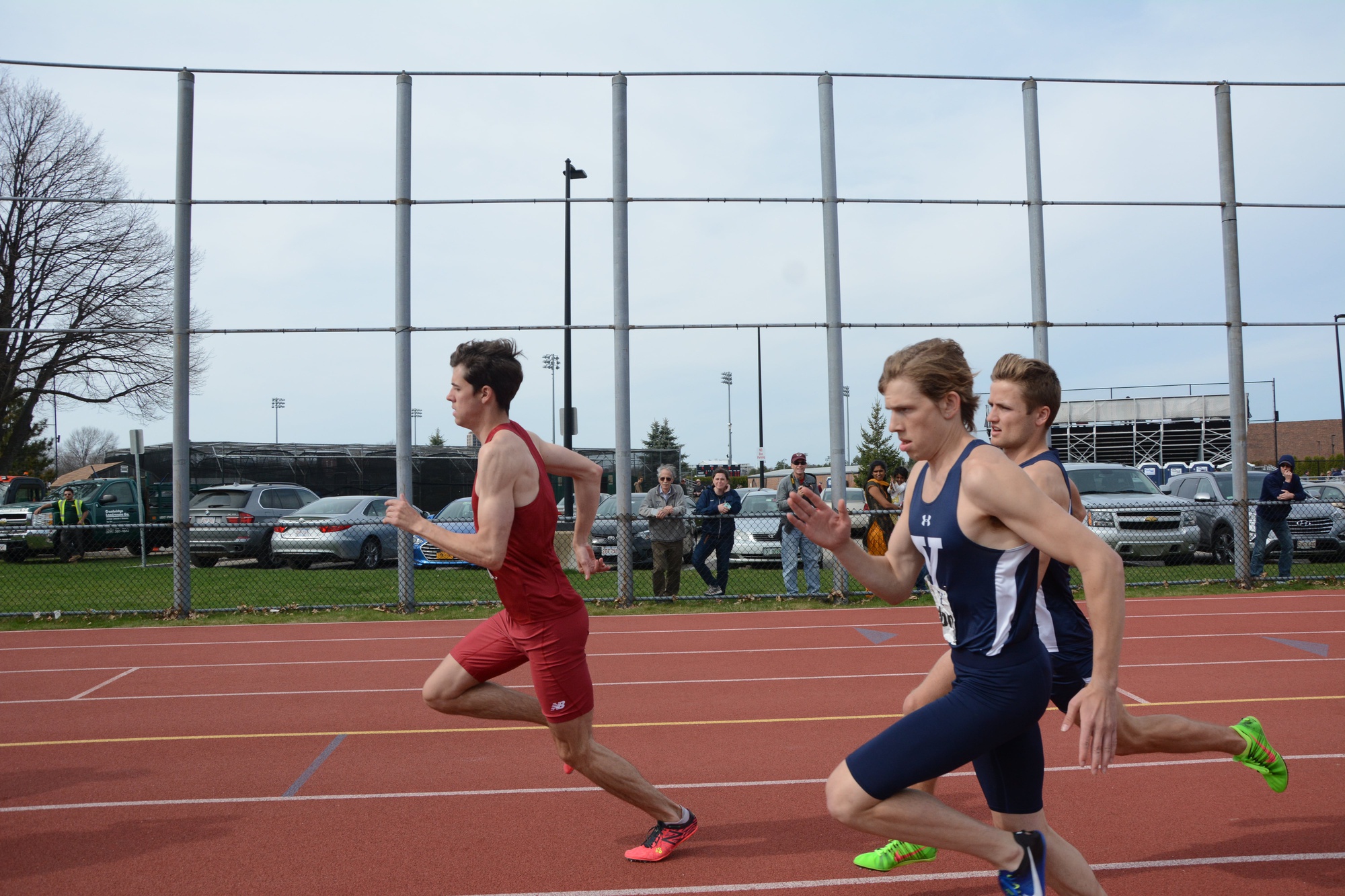 Senior Thomas Negron outpaces two Yale racers in the Harvard-Yale meet earlier this season. At the Outdoor Heps, the men’s team put on its best showing since 2014, racking up a total of 85 points.
By Cade Palmer, Crimson Staff Writer

The 800-meter run is infamously one of the worst events to compete in and it’s probably even harder to run with only one shoe. But that is exactly what Myles Marshall did.

Losing his cleat in the final 200 meters of the race, the sophomore finished the final turn and sprint with only a sock between his foot and the track, holding off Brown’s Zachery Emrich to claim the gold—by .05 seconds.

Marshall would not celebrate his gold alone. At the Ivy League Outdoor Heptagonal Championships hosted this weekend by Yale at their Cuyler Field and Dwyer Track, the Harvard women’s team monopolized their track and field success this season by bringing home their third, of three, Ivy League championship. The victory secures the program’s first ever triple crown, with additional golds in both the Ivy League Indoor and cross country championships. The men’s team placed fourth overall, only one point behind third place Penn.

For the women’s team, the win represents a continuation of the program’s recent dominance within the Ancient Eight. The victory is their fourth consecutive gold at the Outdoor Heps, on the heals of their fifth Indoor Heps championship in late February.

“Going into this Heps, our women's team wasn't favored to win,” co-captain Raegan Nizdil said. “I think that's what makes this victory so sweet for us. With a record like ours, it's easy to get complacent. This weekend, however, we were anything but. Our girls really gave it their all and laid it all out on the track, and I've never been more proud as a teammate or captain.”

Sophomore Gabby Thomas continued to play a large role. The indoor All-American was golden on the day, winning—or helping to win—every single event she competed in. Overall, Thomas brought home five gold medals and was unanimously named Most Outstanding Track Performer. On Saturday she led off the meet with the team’s first gold, matching her own school record in long jump. Freshman Simi Fajemisin claimed the second position on the podium, and classmate Zoe Hughes leap only .13 meters less than Fajemisin measuring a distance of 6.14 meters.

On the second day of competition, the women’s team dominated their rivals. Senior indoor All-American Nikki Okwelogu got things started for the team. The senior maintained her 2016 title in the shot put, with a toss of 16.45 meters, and claimed her second medal of the weekend, a silver in discus, with a throw 52.55 meters.

Nizdil represented one of the other women in the field, competing in the high jump. The senior, leapt 1.72 meters to claim a gold of her own and was followed by rookie, Fajemisin, picking up another gold in the triple jump.

“I'm very happy I was able to do the most I could have to contribute to the team score,” Nizdil said. “Heps really comes down to day-of performances, and I'm happy to have come through for the girls. It's the best possible way I could have imagined ending my track and field career.”

Four total golds in the field, the women’s team carried their success onto the track. The group led off with first and second in the 100-meter dash, Thomas at first in 11.15 and sophomore Ngozi Musa in 11.39 seconds.

In the 200-meter dash, Thomas claimed another gold. Finishing her trademark event with a time of 22.84, the sophomore maintained her superiority in the sprints.

Freshman distance runner Judy Pendergast ran 15,000 meters total on the weekend, and left two medals to show for it. First competing in the 10,000-meter run, the freshman finished in 34:59.37 to grab a bronze medal. On day two, Pendergast ran the 5,000-meter and finished in second.

Three Crimson runners competed in the finals for the 400-meter hurdles. Senior Jade Miller took the top spot for the quartet, crossing the finish line in 56.95 seconds and nearly two seconds ahead of her closest competitor. The victory is her third Outdoor Heps title in four years. Freshman Karina Joiner and senior Sylvia Deppen finished behind her, in fourth and fifth respectively. Miller also claimed a silver in the 100-meter hurdles with a 13.66 second finish.

From there, it was all relays. Taking gold in two of the three relays, the Harvard women began with the 4x100-meter. The group—Musa, Thomas, Joiner, and Miller—ascended to the top spot in 44.42 seconds setting a new Ivy League record in the process. In the longer variant, the 4x400-meter, the team also finishing first, over two seconds ahead of their closest competitor—Cornell. Running for the group was, freshman Maya Miklos, Joiner, Thomas, and Miller.

Overall, the women’s team would claim the team championship with a program record of 164 total points. The men, would take fourth with 85 points, 39 more than they posted last year.

Following a second place finish in triple jump last year, Uwaifo was back for gold. And that’s exactly what he did. The captain took his second gold of the meet in the field, claiming the triple jump championship with a leap of 16.18 meters, a new personal best. As a result, Uwaifo was named the men’s Most Outstanding Field Performer.

Sophomore Myles Marshall claimed the team’s other gold medal, with a 1:53.77 finish in the 800-meter run.

Freshman Donagh Mahon and Junior Jay Hebert racked up points for the team as well with third place finishes in high jump and the 110-meter hurdles, respectively.

The men’s 4x400-meter relay team—composed of junior James Heckendorn, junior Alexander Moore, freshman Tom Rienas, and junior Matthew Hurst—rounded things out for the Crimson and took second, behind only Yale.

For several, it was last week’s preparation meets with the Penn Relays and the Stonehill Invite that pushed them over the edge competitively.

“This past weekend was an important week for those trying to solidify their spots on the Heps roster,” junior Randy Raymond said. “It was also a good opportunity to get a last bit of competition.”

Next weekend, the qualifying athletes travel to Princeton, where they will compete in the IC4A/ECAC Championships.

“I think I speak for the whole team when I say that we are proud of our hard work and our titles we have earned as product of such work,” Nizdil said. “Four outdoor titles is an astounding feat we are delighted to earn, but we are still hungry for more titles, better marks, and faster times.”