An Interview with Dominic Matthews of ‘Hellblade: Senua’s Sacrifice’ 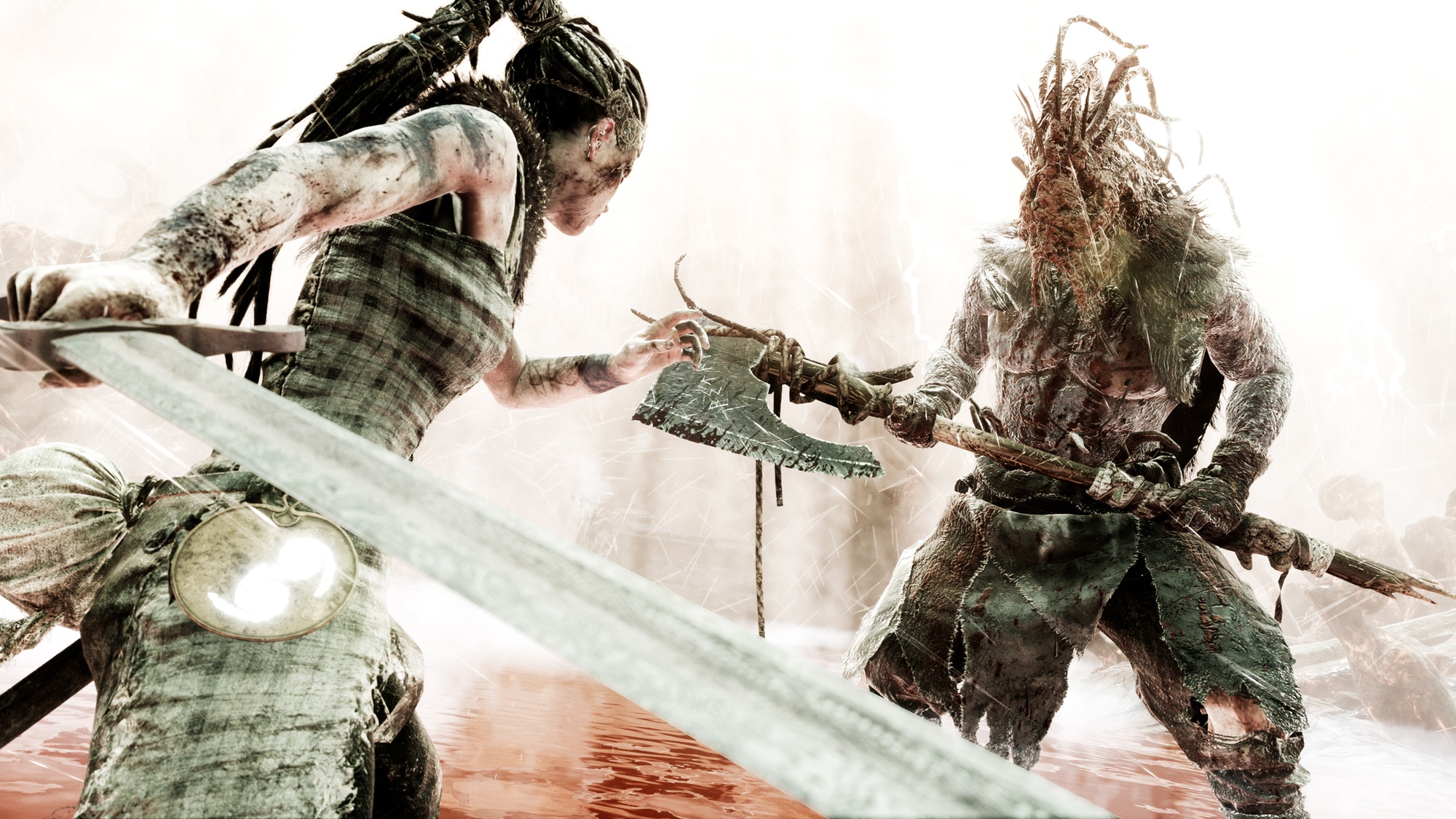 The Harvard Crimson: What is Hellblade about? A lot of the press material has been pretty unique for the genre — there’s no combat depicted in the trailer, everything focuses in on Senua, etc — so what is it about? And how is it different from your last title, DmC: Devil May Cry? (DmC: Devil May Cry is an arcade-style action-adventure RPG developed by Ninja Theory and published by Capcom.)

Dominic Matthews: Hellblade is really a story about Senua’s journey. She’s on a quest to save her lover, it’s a journey and a struggle, a physical and a psychological journey, and I think everything in the game is there to be part of that journey. Every element of gameplay, whether it be combat or puzzle-solving or exploration, is all there to be part of that narrative journey. It is very much a narrative-driven game, something that we hope will leave an impact on people when they play the game. That’s one of our aims here as a studio, and for me personally, when we have fans contact us and say one of our games gave them an experience they’re going to remember. I think that’s part of what we want to achieve with a game like Hellblade. But Hellblade is a very dark game, it’s really a quite brutal game, and I think it tells a compelling story, one that will intrigue people, and we hope it will leave an impression.

It’s quite unlike DmC, you know, where the combat style was quite over the top. In Hellblade, everything’s very intimate—the camera is very close to Senua. It’s brutal, and it’s very visceral, so combat is different. It’s very tactical, but it’s combat where we want you to feel every blow, like every fight is a real battle that Senua has to get through to move on to the next part of her journey.

THC: How did your experience developing something like DmC, which was fundamentally about the gameplay loop as opposed to the narrative, feed into your work on Hellblade? How much of the decision to move towards more of a narrative focus was engineered, and how much was emergent?

DM: I think a lot of that comes out of our decision to develop Hellblade as an “independent AAA” game. You know, we’re a studio of about ninety people. After DmC, we stepped back and took a look at the game space, what’s happening in the industry. On the one side, you have the indie space where there’s a lot of creativity, diversity and depth to the genres, and on the other end you have the big blockbuster AAA games, which are kind of designed to fit the $60 bracket, and the number of genres which can survive there are limited.

And that’s not easy, but it’s more realistic, and that gave us the confidence to make this game, which is really a Ninja Theory game. It’s 100% Ninja Theory. We’ve made a game that is different.

It’s different from a lot of the action-adventure games out there. It’s a very intense and immersive experience, and I think we knew from day one that Senua and her story would be at the heart of this game, and that a lot of the game would be built around that. Our Ninja Theory DNA is unique art style, character-led story, and combat gameplay. With those three areas of focus, we then layered on Senua’s experience of psychosis, and iterated all the way along until we had something that we were really pleased with.

THC: You’ve decided to explore mental illness and psychosis with Senua. Can you talk about when in the design process you thought, “this is something we can explore”?

DM: That was a decision we made really at the beginning of the process, and it kind of snowballed from there. We met with someone from Wellcome Trust, which is a fascinating charitable foundation based here in the UK. They support arts and creative projects that engage people with science, but not in an overt way—they like TV and games and movies, that sort of thing. We told them about Hellblade, and they loved the idea, and agreed to help us.

It was through them that we met Professor Paul Fletcher, who is a psychiatrist and professor of health neuroscience at University of Cambridge—we’re based in Cambridge and Paul lives about five minutes from the studio, which was perfect. We had the opportunity and the privilege really to meet with a group of people who have lived experience of psychosis, hearing voices etc., and hearing about their experiences and working with them to realize some of those ideas and concepts in the game, which has been fantastic and without a doubt has made the game more compelling and enriched the creators.

THC: So you took steps to try to recreate an authentic experience of psychosis inspired by the real-life stories of people who live with this illness?

DM: Everyone’s experiences are unique … we’re not trying to provide a blueprint or catch-all of “this is what it’s like to live with psychosis” but … a way of experiencing psychosis that’s true to the lived experience. So, take the example of hearing voices. Some people will hear voices in the same way you’d hear anyone else’s voice … and they can place them in the 3D space around them. We wanted to take that idea and try to bring that concept into the game. So we recorded all of the voices binaurally, so that when you encounter them in the game you’ll be able to place them in 3D space around you, particularly on headphones. I think that’s a good example of the types of things people shared with us and we said, “if the player is going to encounter voices in the game, how can we make that as authentic an experience as possible?”

THC: Why did Ninja Theory choose Celtic and Nordic mythology as the basis for the story?

DM: It’s a quite interesting time period. Senua is a Pictish Celt, and around 790 A.D. it’s believed that the Vikings traveled to Orkney and wiped out the Pictish Celts, so it’s a very interesting time in history. It’s a cultural reference that hasn’t been overused too much.

We’ve always made fantasy games of a sort, and we really wanted to make this a fantasy story where the fantasy is created by the protagonist’s mind. I think there was something interesting to set the story in a historical or fantasy setting where people’s guard is slightly down, or slightly more open to exploring new topics, and I think the topics of mental health and psychosis in the game, people don’t attach modern day conceptions to it in a historical setting. That was part of the reason, to break down those barriers, by setting it in an unfamiliar time for people.

THC: Ninja Theory has a long history of working with industries outside of the gaming industry. What kind of industries have you worked with with Hellblade, and how did those fold into the game development process?

DM: I think in the past we’ve worked with people like Andy Serkis, who played Monkey in Enslaved, and Alex Garland, who was involved in both Enslaved and DmC. We’ve got a history of working with musicians outside of the games industry as well.

Hellblade is slightly different. [Most of the collaboration outside of voice actors and music] has been with scientific collaborators. It’s not a relationship where we’re working with them on the basis of consultancy

It’s been a constant dialogue about how we can use the latest ideas in neuroscience in the game, but also how we can use video game technologies in science. The way we’ve presented voice hearing in the game is already being used in lectures at a number of universities, because some of the people we’ve been working with think it’s the best representation of voice hearing that there is ... something I like to say to other developers in particular is that people fear the idea of working with science because they’re worried they’re going to come in and tell them that everything they’ve done in their game isn’t scientifically accurate, but we’ve found the opposite. The people we’ve worked with have given us ideas and helped us come to creative concepts that have completely enriched the game.

THC: Why should someone pick up and play this game?

DM: I think if people take a look at it and they’re interested in it [then they should get it]. I’m not going to give a hard sales pitch, because I think Hellblade is, by its very nature, a niche game. It’s a very intense, immersive experience. I think if you like story-driven games, then Hellblade will be interesting to you. If you’ve enjoyed our games in the past, I think you’ll enjoy Hellblade. It’s quite a mature experience, and it’s a different experience. I will say, we’ve been developing Hellblade openly through our dev diaries and things, and I’d like to take the opportunity to say thank you to everyone who’s supported us. We are trying something different, something new in Hellblade, and the support we’ve had has been incredible, and incredibly appreciate by the team. I and other people here have dedicated three years of our lives to this game, and at times it can be all-consuming. But, knowing that there’s people out there anticipating this game, are counting on us, and supporting us, is part of what helps to keep us going. So I’ll say thank you for that.

—Staff writer Noah F. Houghton can be reached at noah.houghton@thecrimson.com.