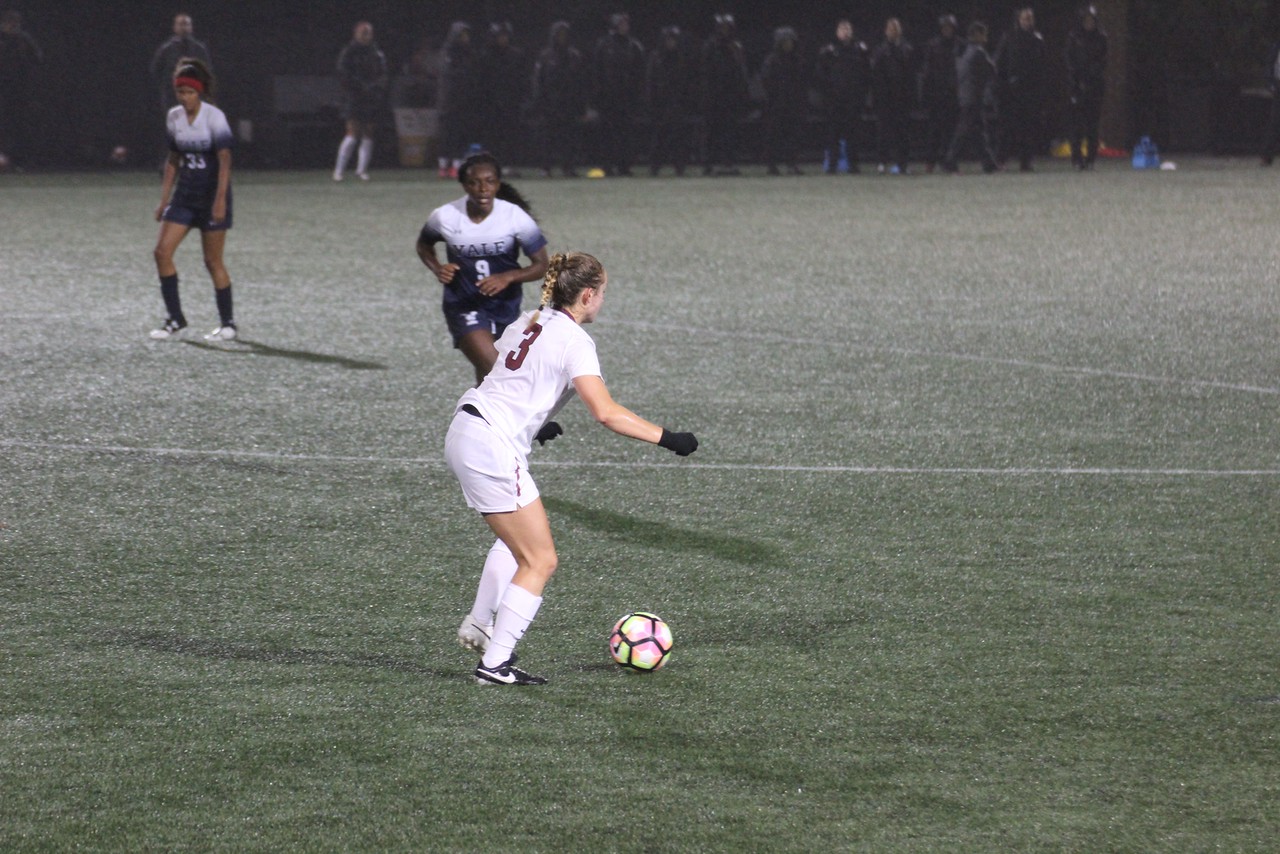 Now-junior forward Alli Wiggins looks to play the ball through mid-field in last October’s match versus Yale. The Methuen, Mass., product started 10 games for the Crimson last season, helping her team finish at 10-4-3 before bowing out of the NCAA tournament to No. 22 Rutgers. By Margaret F. Ross
By Bryan Hu and George Hu

The next five days for the Harvard women’s soccer team will perhaps be a test of two things: endurance and the ability to fine-tune.

Can the Crimson squad, sitting on a 4-2 record for the year, pull through a grueling stretch of three games in five days while continuing to dutifully prepare for the quickly-approaching Ivy League conference play?

The tests start Wednesday afternoon against Quinnipiac (4 PM, NSEN), as the Bobcats roll into Cambridge with a .500 winning percentage and a dangerous junior forward, Nadya Gill, who has already posted 12 points on the season. Harvard, coming off a 1-0 loss to Syracuse, will look to get back to its winning ways against the visitors before taking on Villanova and Seton Hall in quick succession later in the week.

On the other hand, Quinnipiac (3-3) has lost its last two games and has a minus-six goal differential on the season. The team out of Hamden, Conn., has also been outscored 7-3 in its last two defeats.

To make matters worse for the Bobcats, the Crimson is 3-0 all-time against Quinnipiac and is 19-8-6 at home since the start of the 2013 season. Harvard has been similarly successful at defending its home turf this season, blanking Boston College and Providence both by a score of 1-0.

Against a slightly reeling team, the Crimson, with a defense as successful as any, now has a relatively clear aim: to score more goals.

In a season in which the Crimson has played brilliant lockdown defense—allowing just half a goal per game—the Harvard players know that the importance of creating and finishing attacking opportunities has grown significantly. The game plan is now to complement their strong backline performance with execution on the other side of the pitch.

“Keep doing what we’re doing, just keep playing soccer the way we have been,” said senior co-captain Marie Becker. “Capitalizing on the chances we create and be more effective in the final third.”

The Bobcats are certainly prone to being scored on—the team is capable of both putting up and giving up many goals in its high-scoring affairs. In its three losses this season, for example, Quinnipiac was scored on three, three, and four times.

The Bobcats have also scored 11 times in six games, so the threat to Harvard’s resilient defense certainly remains.

“They’re going to be a team that’s going to attack us,” Harvard coach Chris Hamblin said. “We have to try and make sure we can withstand that.”

Quinnipiac’s Gill leads her team to Jordan Field, with five goals—three of which have come in the last two games—and two assists on the season. The streaking third-year also leads the Bobcats with 17 shots.

Redshirt freshman Kelsey Goldring is second on the Bobcats with seven points, posting two goals and three assists. The Quinnipiac roster boasts two more players who have scored twice in this young season.

In comparison, junior midfielder Leah Mohammadi is the clear powerhouse of the Crimson offense yet has posted one fewer point than Goldring—six points on three goals and no assists. In addition, only two players—Mohammadi and freshman Murphy Agnew—have scored a goal for Harvard.

Despite not finding the back of the net, Harvard still played its most complete game on offense this past Sunday. It created plenty of chances against ACC foe Syracuse and racked up a season-high 11 shots. Mohammadi launched seven shots, while Agnew and fellow freshman attacker Lauren Raimondo added one and two shots, respectively.

In addition to adding to its offensive pressure, the Crimson players believe they’ll be able to mitigate Quinnipiac’s threats by continuing their strong defensive play on Wednesday. Harvard has posted four shutouts in six games and has only been scored on three times to date.

“We’ve played against good players in the past, and especially with a team effort, we can deal with anything,” Becker said.

Becker, a defender out of Kiel, Germany, played with Gill on the Boston Breakers Academy Program team over the summer and described her as “a very good player, no doubt.”

“There are no hard feelings coming out of the match,” the senior said. “But there are definitely no friendships in the match.”

After Wednesday afternoon, the Crimson travels to Villanova on September 15 and hardly has time to rest before traveling to Seton Hall on September 17.

When Harvard gets to Ivy League play, though, it’ll have more chances to breathe. A week separates most of the Crimson’s matchups against its Ancient Eight foes, starting with Penn on September 23.