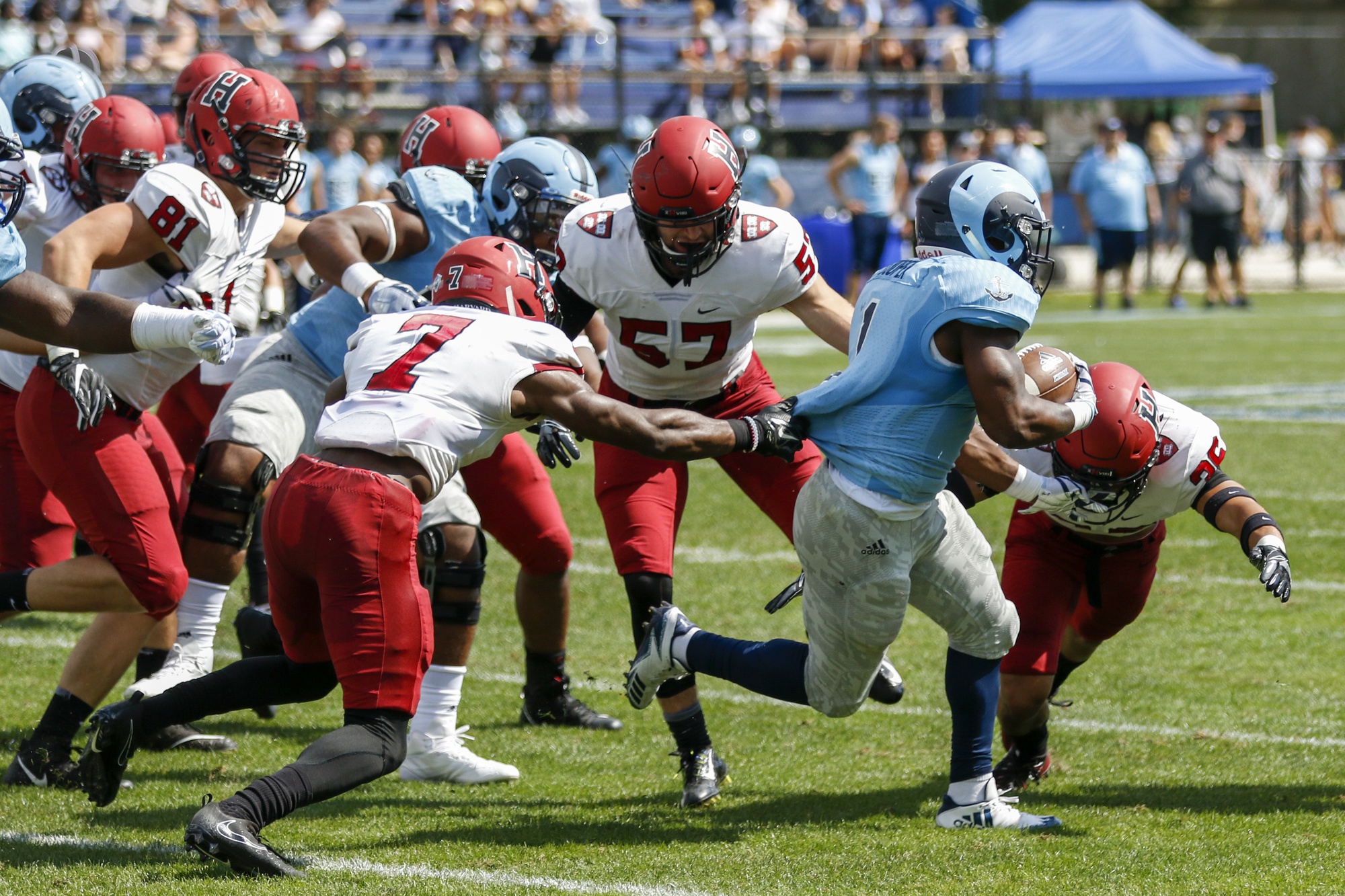 In the past three seasons, Harvard has lost only four games. In those same seasons, Rhode Island has won only four. Saturday’s contest increased both numbers to five.

The Crimson came into the season’s inaugural matchup with history on its side. Not only had Harvard never lost to the Rams, but also the Crimson had won the past two matchups by at least 30 points.

Further, Harvard had not dropped a season opener since 2011. But history is apt to change, and the Crimson figured out pretty quickly.

“We knew it was a different Rhode Island,” Harvard coach Tim Murphy said. “They were the better coached team today, they played better than we did, and they deserved to win “

While the Crimson got on the board first with a field goal, the Rams responded with a 51-yard touchdown pass eight minutes later. Rhode Island never looked back, taking the upset victory, 17-10, and picking up its first win of the season.

Harvard maintained its initial 3-0 lead throughout the first quarter. The woes began with the start of the second.

Barely over a minute into the quarter, tragedy struck. Rolling to the left, Rams junior quarterback Tyler Harris found classmate Marven Beauvais on an 18-yard route. As he caught the ball, Beauvais touched down by the Crimson sideline only to be pushed out by the barreling Ben Abercrombie, a Harvard freshman corner. Rhode Island converted the first down, but Abercrombie did not return to his feet.

Surrounded by his teammates, Abercrombie lay on the ground for several minutes with medical personnel working on him. Attendants eventually placed him on a stretcher, removed him from the field, and took him to a Rhode Island hospital. The scene affected both teams.

“In spite of a great victory for the University of Rhode Island football team...our most prevalent thoughts are for Ben Abercrombie, who sustained a significant injury today,” said Rams’ coach Jim Fleming in a post-game interview. “Our thoughts and prayers today are with him and his family for a speedy recovery.”

The injury must have rattled the Crimson, and on the very next play, Rhode Island sensed it. The Rams struck hard on the next play. Harris hit his sophomore wideout Aaron Parker on a 51-yard streak that finished in the end zone. The Rams took their first lead of the afternoon and did not trail again.

After the game, Harvard Athletics circulated an email statement reporting that Abercrombie had undergone surgery to address a serious cervical injury. The message also reported that he did not have feeling in his arms or legs but is experiencing normal brain functions.

“Our hearts go out to Ben and his family right now, and they have our full support,” the statement continued. “We are doing all that we can in aiding in his recovery.”

It naturally follows that in order to win games, you need to score points. On Saturday, Harvard lacked in this particular category, especially when compared to previous seasons. In 2015 and 2016, the Crimson put up 41 and 51 points, respectively, in its season-opening games. On Saturday, the program barely hit double digits.

One factor contributing to this lackluster offensive performance was the field positioning that the team faced on nearly every drive. The Rams’ freshman punter, Satchel Dento, was exceptional. Out of his five punts, four landed within the Crimson 20. In contrast, Harvard’s punter, senior Zach Schmid, landed only a third of his six punts in the red zone.

Denton didn’t just land the ball in the red zone, though—he pinned the Crimson solidly against its goal line and left Harvard’s explosive returner, junior receiver Justice Shelton-Mosley, with only one attempted punt return. Denton dropped kicks at the 12, 7, 35, 12, and 14. Shelton-Mosley attempted a return on the punt by the 35, earning a hard-fought 13 yards. The rest of the kicks either were fair-caught, downed, or rolled out of bounds, stymying any opportunity for the Crimson to start at a favorable position.

Field position wasn’t the only hindrance to the Harvard offense. The Crimson’s blocking upfront proved weak. That weakness disrupted nearly every play. Many times, senior quarterback Joe Viviano was flushed from the pocket. And many times, junior running back Charlie Booker III hit a wall at the line of the scrimmage. Harvard couldn’t secure the backfield, and the whole offense suffered as a result.

In a stark comparison to Rhode Island, the Crimson’s backfield was sacked five times for 33 yards. The Rams lost only seven yards on two sacks. Viviano finished with negative rushing yards on the game. The senior lost a total of 36 yards and picked back up enough to finish with -19 on the afternoon.

The most salient instance of the breakdown of the offensive front came at Harvard’s time of greatest need. The drive began at the team’s own 14-yard line. The Crimson drove the length of the field to the Rhode Island 16. A few short runs landed Harvard seven yards from the goal. With just above six minutes left to play, the team faced a fourth-and-one conversion. In unison with the snap of the ball, two defenders broke immediately through the line, hitting Viviano as he faked a handoff. The quarterback coughed up the pigskin into the chest of the awaiting defensive back Momodou Mbye. That turnover ended a drive that had bled 5:23 off the fourth quarter clock.