‘The Mad Cartoonists of Cairo’ Reflect a Changing Middle East 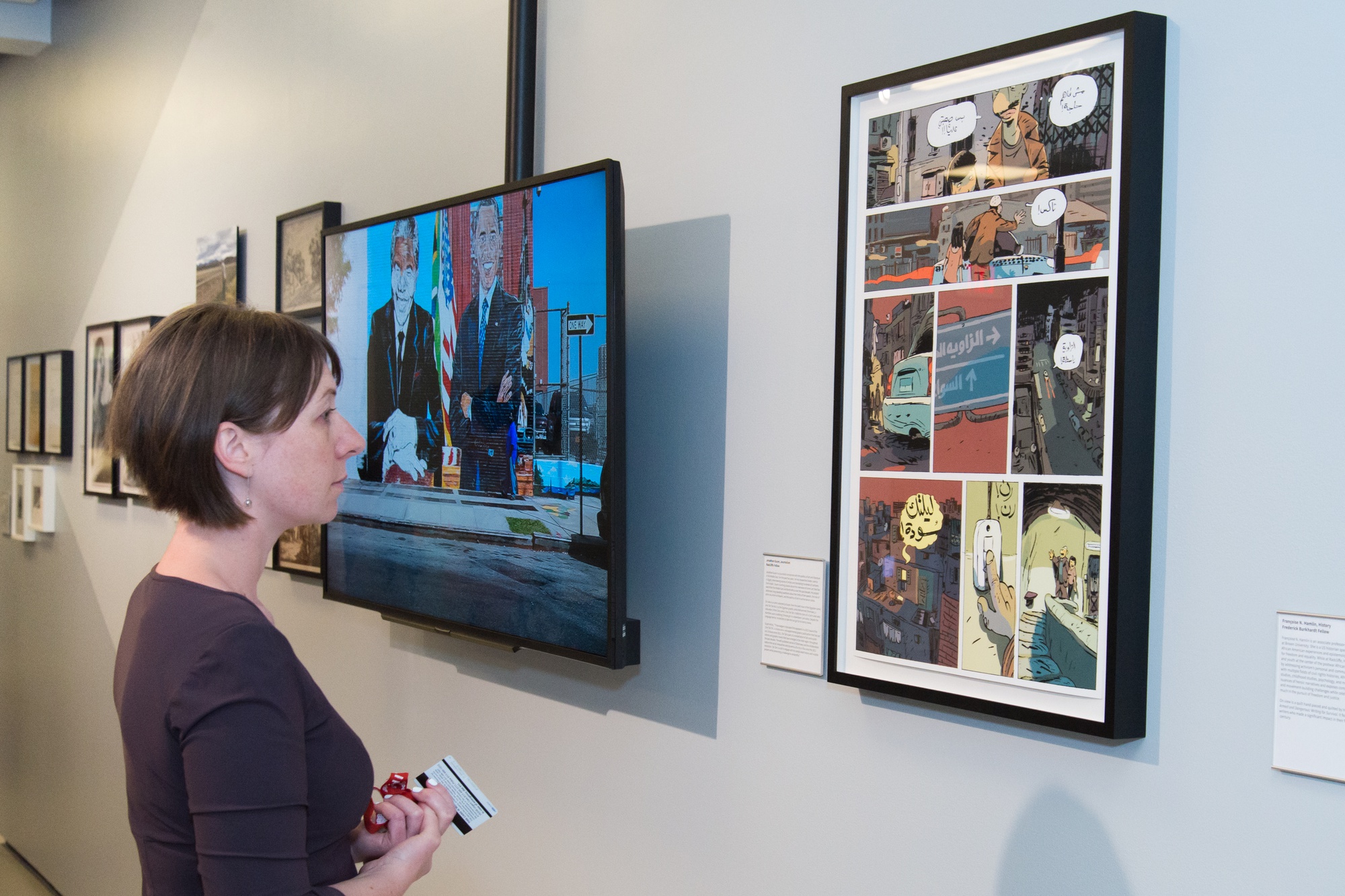 By Michael A. Bruce-Rivera, Contributing Writer

On Sept. 13, Radcliffe Institute Fellow Jonathan Guyer gave a lecture on the “Mad Cartoonists of Cairo.” A journalist and contributing editor of the Cairo Review of Global Affairs, Guyer has lived in Cairo for the past five years, exploring and researching the new wave of comic art in the Middle East and North Africa for a book he is currently writing. Guyer presented a survey of comic art mainly from the turbulent city of Cairo, analyzing the medium’s ability both to critique and influence Middle Eastern society and culture.

Guyer began his lecture with the question that guided him through his studies: “What is the importance of this Arab comic movement?” He argued that comics are windows to the current social and political situation of the Middle East. He began to substantiate this thesis with a stylized cartoon drawing of Cairo by cartoonist Shennawy from the Cairo publication “Tok Tok.” The text in the corner of the image, translated from Arabic, reads “Cairo, 60 years from now, and nothing has changed,” a derisive statement that, as a recurring theme in the lecture, pervaded through each series of politically-charged cartoon he presented. For example, one of the cartoons— a hyperrealistic depiction of Cairo—comments on the city’s increasing urbanization while a sardonic drawing of a smiling Egyptian family, splattered in blood, criticises the violent rise of Abdel Fattah el-Sisi, the incumbent president of Egypt who came to power through a 2013 military coup. For Guyer, art and politics work in tandem, constantly fueling both creativity and policy.

After presenting a variety of controversial work—selected from various magazines and newspaper articles— Guyer turned to the cartoonists themselves, mad in every sense of the word. These artists, Guyer observed, are frantically mad at the state, outrageously mad for defying tradition, and eccentrically mad in their art’s absurdity. A unique feature of cartoons depicting Cairo is their sense of black humor. For example, just days after Hisham Barakat, the Egyptian prosecutor general, died in a car bomb assassination, cartoonist Anwar drew a citizen nagging a cloaked assassin to at least pay for his parking before he blew the car up.

While some may believe this to be in bad taste, for Guyer, these comics use absurdity to undermine the power of terrorists. Guyer believes that by mocking these killers through caricature, the cartoonist belittles their intentions. Stenciled eyebrows are good for laughs, but not for perpetuating a fear-mongering agenda.

Guyer uses the term “creative insurgency” to describe this current artistic movement. The current Egyptian government censors many of these comics. Guyer argues, however, that the censorship of controversial art only speaks louder about the power of the medium.

Lizabeth Cohen, Dean of the Radcliffe Institute, had this to say about Guyer’s research in an email: “Jonathan’s work is a vivid reminder to me of the value of an institute for advanced study at Harvard—a space in which a brilliant journalist can step back from his day-to-day responsibilities and explore what he calls ‘a creative insurgency’ under way in the Middle East.”

Following the lecture, the Radcliffe Institute showcased a comic from Guyer’s amassed collection at [the Visual Intelligence exhibit, which is a multidisciplinary group exhibition that introduces the 2017-2018 Radcliffe Institute Fellows that will run through Sept. 14 until Oct. 28 in the Johnson-Kulukundis Family Gallery.