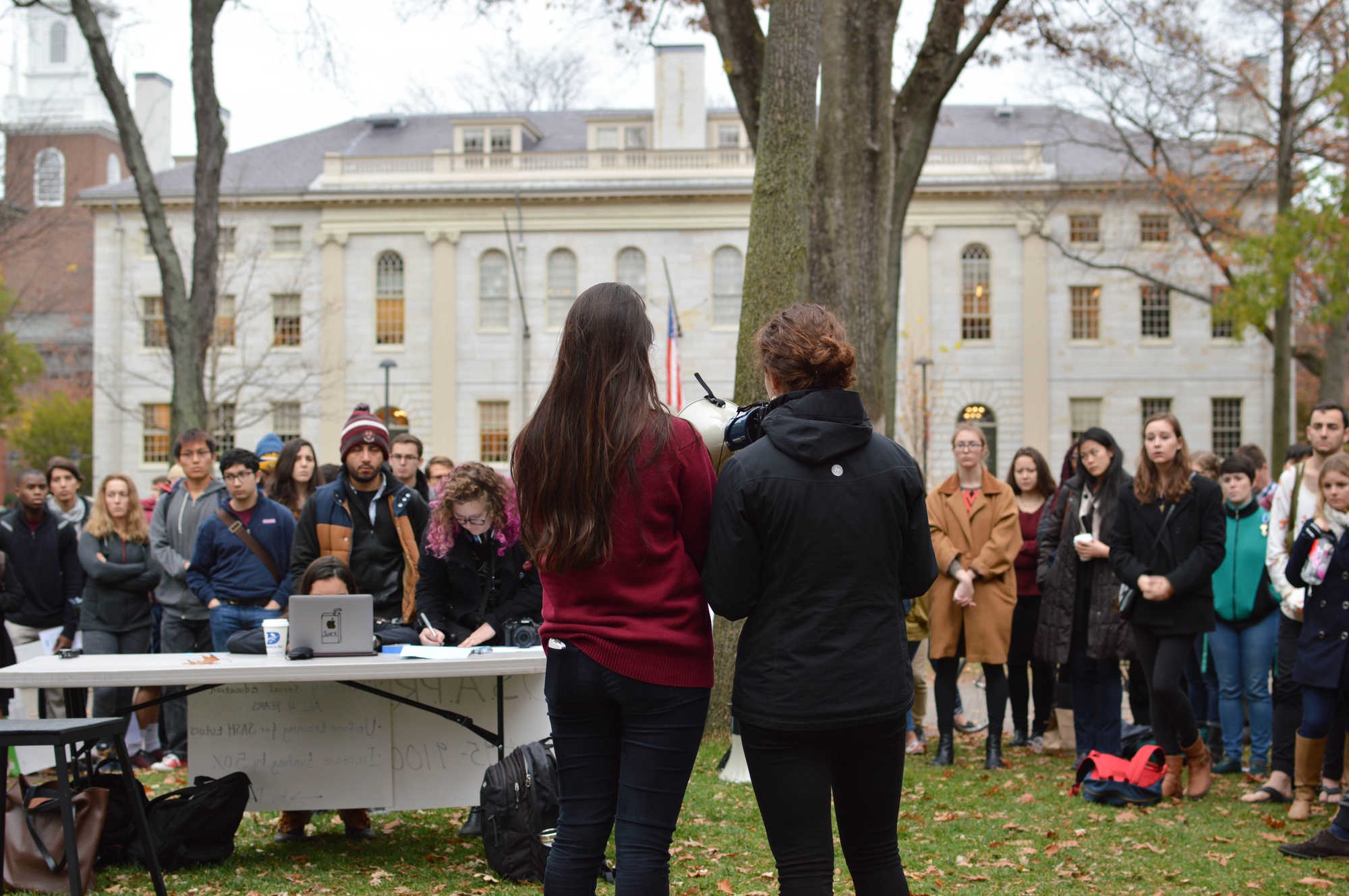 More than 80 undergraduates convened outside Massachusetts Hall to call on the College to commit more resources and attention to preventing sexual assaults on campus at a rally on Thursday.
By Hannah Natanson, Crimson Staff Writer

Harvard is “reviewing” new federal Title IX guidance—released last week by Education Secretary Betsy DeVos—cancelling an Obama-era requirement that colleges use the lowest standard of proof when judging whether an accused student is guilty of sexual assault.

DeVos announced the policy change in a press conference Friday afternoon, saying universities are now free to abandon that standard—known as “preponderance of the evidence”—and instead adopt a higher standard, “clear and convincing evidence.” In a statement Sunday, University Title IX Officer Nicole M. Merhill wrote that “the Title IX Office and Office for Dispute Resolution know of no current plan to change the standard of evidence” after DeVos’s statement.

Former President Barack Obama issued the guidelines DeVos scrapped Friday in a 2011 “Dear Colleague” letter. That letter, which also demanded universities treat sexual assault as a violation of Title IX, spurred Harvard—and institutions across the country—to completely rethink its response to sexual assault cases. The University in 2014 created a central office to investigate sexual violence on campus and embraced all-new Title IX policies, including the “preponderance of evidence” standard.

DeVos’s shift in federal guidelines would allow Harvard to raise its standard of proof while not running afoul of the government, though it does not mandate the change.

“We are reviewing the guidance released by the Department of Education...rescinding guidance from 2011,” University spokesperson Tania deLuzuriaga wrote in an emailed statement Sunday afternoon. “We have worked hard in recent years to develop strong and fair policies.”

“The safety and well-being of our community remains the University’s top priority,” she added.

Anti-sexual assault advocacy student group Our Harvard Can Do Better condemned DeVos’s announcement in a statement issued Sunday evening and called on Harvard to take action.

Students convened outside of Massachusetts Hall in 2015 to call on the College to commit more resources and attention to preventing sexual assaults on campus. By Y. Kit Wu

“Harvard must clarify that changes to our policy made since the 2011 guidelines and subsequent opening of a Title IX investigation against the University—including the adoption of the preponderance of the evidence standard—will not be rolled back," organizers Amelia Y. Goldberg ’19 and Liam L. McGill ’19 wrote in the statement.

Administrators have previously said Harvard is unlikely to alter its current Title IX enforcement strategy. In a February 2017 interview just before DeVos was confirmed as Education Secretary, Deputy Provost Peggy E. Newell promised any “relaxation in requirements” from the White House would not diminish the University’s commitment to solving issues of sexual assault.

But should new requirements “come down,” Newell added, Harvard will “obviously comply” with federal policy.

In her speech rescinding the Obama-era guidelines Friday, DeVos did not offer a replacement policy. Instead, she said she plans to debut new rules after a months-long public comment period—until then, colleges are free to use whichever standard of proof they prefer.

“The government has literally at this point said, ‘We’re agnostic on this issue, you can have either one,’” said Scott D. Schneider, a Tulane University professor and attorney who specializes in higher education law.

Schneider said he does not think “anything” will change at Harvard following DeVos’s decision, adding he believes the University is unlikely to raise its standard of evidence “right now.”

Other Title IX experts took the opposite view. Colby Bruno, the senior legal counsel at the Victim Rights Law Center, and Vanessa M. Grigoriadis, who recently wrote a book on campus sexual assault, both said they think Harvard may upgrade its standard of proof.

“I think Harvard is probably the first place that will change it,” Bruno said. “Harvard was one of the last standouts to institute ‘preponderance of the evidence,’ so it wouldn’t surprise me if Harvard went back to a ‘clear and convincing’ standard.’”

Grigoriadis agreed, adding she also “would not be surprised” if Harvard returns to the higher standard. Both women cited pressure from high-profile Law School professors who think poorly of the University’s 2014 Title IX policies as a major reason Harvard might make the change.

In October 2014, three months after Harvard debuted its new Title IX procedures, 28 Law School professors signed an open letter condemning the policy and calling for its withdrawal. In their letter, the professors took particular issue with the lower standard of proof.

Harvard has faced federal scrutiny over its compliance with Title IX before; in 2014, the Law School was found in violation of the law, and the College is currently under investigation by the Office for Civil Rights.