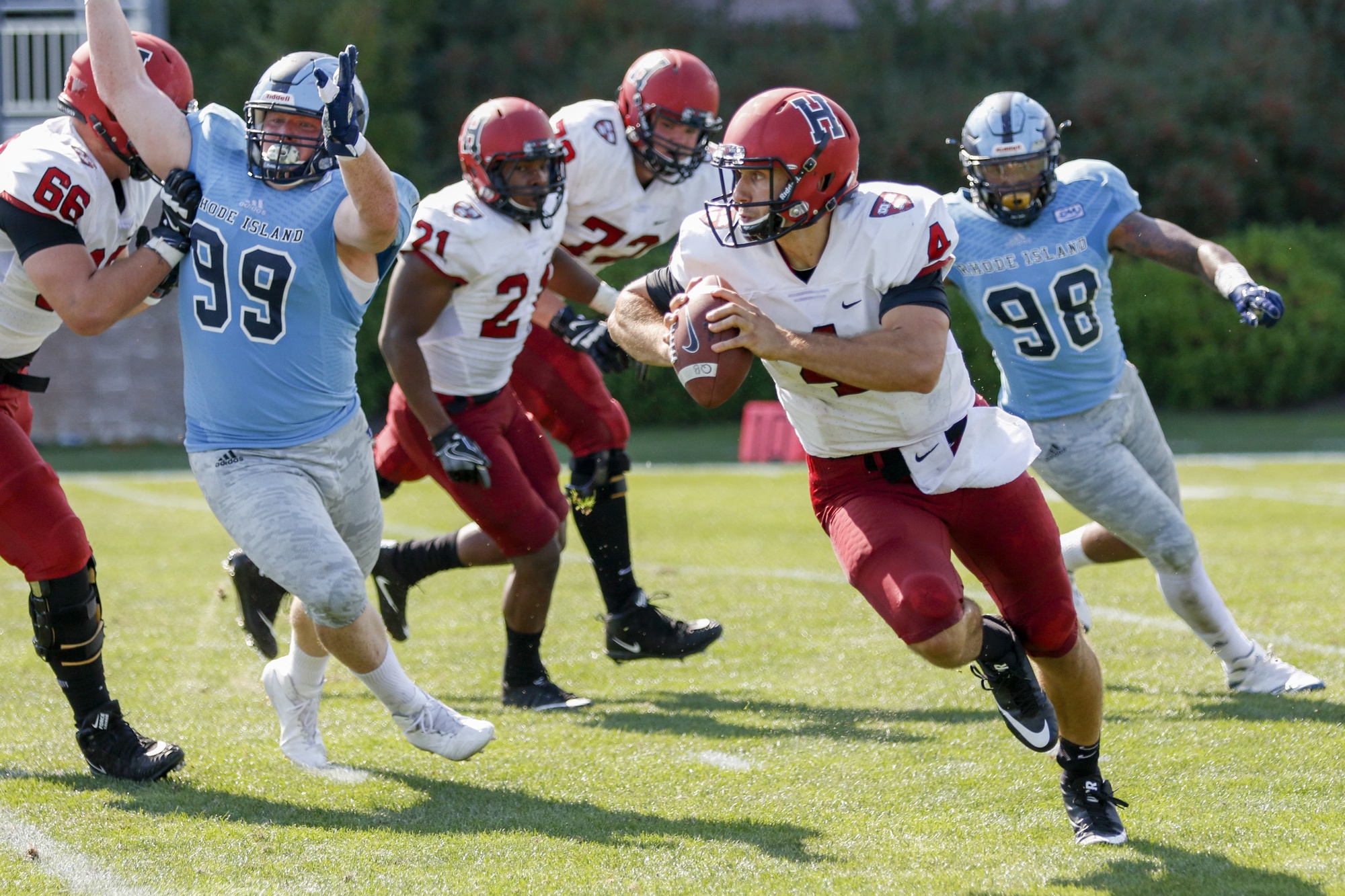 For Football Seniors, Emotional Hits Sting the Most

The Harvard football seniors have absorbed many hits—tackles, blocks, and collisions with the ground. Nothing compares to the emotional pounding.

On Nov. 11, 2016, these seniors—then juniors—traveled to Penn in hopes of avenging a 2015 loss and earning a fourth-straight league championship. The Quakers quashed that dream with a two-minute drill and a 27-14 victory.

Sometimes noise deafens. At that post-game press conference, amid the smell of sweat, silence deafened. Soon-to-graduate defensive linemen James Duberg ’16 and Langston Ward ’16 stared from behind a table. Memories of the last three hours played on the back wall.

That Penn setback, however, ranked as only the third-most difficult experience that 2017 seniors have endured.

The next weekend, the Crimson dropped The Game—not just any version of The Game but a one-score home loss that would have given Harvard an Ivy four-peat and extended a nine-game win streak over Yale. The Bulldogs, by the way, owned a 2-7 record and started a rookie quarterback.

The upset set off weeks of second-guessing. The reckoning still hasn’t ended—and won’t until Nov. 18, 2017, when the two teams meet again.

“We didn’t play with the emotion that’s so typical of a Harvard team—and a Harvard-Yale game in particular,” Harvard coach Tim Murphy said. “Those things really bugged me.”

But the Penn and Yale heartbreaks seem trivial compared to the real-life tragedy that unfolded on Sept. 16. In a game against Rhode Island, defensive back Ben Abercrombie rammed into a wide receiver and suffered a major cervical injury. As of Wednesday, the freshman remains in a Rhode Island hospital, paralyzed below the neck. His prognosis is uncertain.

Crimson seniors shoulder these events. They shoulder the pain along with the normal burdens of Harvard football—the early-morning workouts, the long bus rides, the inevitable injuries, the relentless academics, the fatigue, the sense of isolation, the cold, the wind, the sniping of lesser opponents, the rivalry of better ones, the internal expectations, and the private doubts.

People talk about “swirling emotions,” but that phrase is wrong. Emotions aren’t nearly so nimble. They don’t swirl. They tumble and tug, like a stone boulder. It takes a strong person to stay upright—and stronger still to convert that grinding, rolling, kinetic energy into something lighter.

“It’s not just emotion on Saturdays,” captain Luke Hutton said after an exhausting win over Brown—exhausting because of Abercrombie’s absence. “It’s emotion throughout the week and in game-planning. It’s emotion put into execution throughout the week. You don’t just win a game based on emotion. You win a game because you outwork the other person. You put emotion towards a game plan.”

This season, the game plan is resurgence. The Crimson hopes to overcome a season-opening defeat to the Rams and regain the Ancient Eight crown.

Harvard’s strength lies in its defense. The senior Hutton leads a linebacker corps that, although thin, boasts experienced first-stringers. The same holds for the secondary, where junior Wes Ogsbury and seniors Tanner Lee, Tim Haehl, and Raishaun McGhee project as long-term starters. The depth chart clouds when considering defensive linemen, but junior D.J. Bailey remains a constant. Last season, he terrorized opponents for seven sacks. He, Hutton, and McGhee all landed on the All-Ivy second team and returned this season.

The Crimson defense has proven inconsistent, however. Against Brown, Harvard looked otherworldly, shutting out the offense through three quarters—at which point Murphy yanked the starters. In 15 minutes, the Bears scored 26 points and racked up 232 passing yards.

Against Rhode Island, the Crimson shut out the Rams in the second half. But wide receivers snuck behind cornerbacks for catches of 51, 39, 33, and 41 yards.

“You’ve got to play great defense,” Murphy said. “And you’ve got to have an offense that’s capable of capitalizing on the opportunities that come their way.”

Meanwhile, Joe Viviano and Jake Smith are battling at the quarterback position. The two share few similarities. Viviano, a fifth-year senior from Berwyn, Pa., started all last year. He’s a 6’4” cannon with spry mobility but sometimes struggles with accuracy.

Smith seems much smaller—smaller even than his 6’0” listing on the Harvard roster. At Ithaca High School in Michigan, the quarterback set school rushing records with 1,772 rushing yards and 34 touchdowns. Now a true freshman, Smith makes quick decisions and has a delicate touch. But again, he is a true freshman.

Last week marked the first public competition between the pair. Smith started against Brown and finished five-of-seven for 72 yards. Viviano looked even sharper. He entered in the second quarter, immediately led a 98-yard drive, and totaled 150 passing yards on 11-of-13 throwing.

Murphy alone will make the final determination, likely in the next two weeks. He’s not revealing his cards.

“My goal is to have three quality quarterbacks in the program by mid-year,” Murphy said. “I think we’re on course to do that…. Right now, it’s a very good competition.”

Whoever wins the quarterback competition will inherit dangerous playmakers. Junior wide receiver Justice Shelton-Mosley has landed on the All-Ivy first team for two years in a row. The Sacramento, Calif., native also returns punts and kicks.

Blockmate Adam Scott, a fellow junior and wide receiver, is even faster than Shelton-Mosley. After missing the first five games of the season, Scott racked up 321 yards and three scores in 2016.

If the pass game ever breaks down, the Crimson can hand off the ball to junior Charlie Booker III, a monster truck disguised as a man. In two weekends, the rusher has rumbled for 216 yards at a clip of 8.3 yards per go.

Look at these studs alone, and Harvard’s success seems as sure as sunrise. Look at the rest of the Ancient Eight, and clouds begin to gather.

In August, media pundits projected Princeton to finish tied with the Crimson atop the Ivy League. Like Harvard, the Tigers oscillate between two quarterbacks when healthy. In 2016, senior John Lovett headlined as the Ancient Eight Offensive Player of the Year. He accounted for 31 touchdowns a year ago, which was more than five of the other seven Ivy squads scored all season.

However, an unspecified offseason injury will keep Lovett out until the middle of the season, which means that fellow quarterback Chad Kanoff will lead the offense. Last year, the then-junior merely landed on the All-Ivy second team. He’s a traditional passer with two seasons of starting experience.

The road extends beyond Princeton, N.J., though. The Quakers won a share of last year’s crown, largely thanks to the triumph over the Crimson. Penn returns all-world wide receiver Justin Watson. The senior Watson averaged 111.5 receiving yards per contest last year. He is, quite frankly, the most talented player that the Ivy League has seen in several years.

Even Yale and Dartmouth will threaten Harvard. Both teams have started 2-0, with the Bulldogs averaging 52.5 points and the Big Green holding opponents to an average of 16.5.

Brown, Columbia, and Cornell project as cellar-dwellers. Still, all teams have competitive potential, even the Lions. With Al Bagnoli as coach of Columbia, the Lions are continuing their trek up Mount Pride. The Crimson can expect a tough game in November.

As Murphy emphasizes, the quality of a football team hinges on uncontrollable factors—practice injuries and rainy turnovers, not to mention the sheer randomness that hovers over every snap.

“Our relative depth is a concern,” Murphy said. “You’ve got to stay healthy. We’ve got 12 freshmen making a road trip, and it’s only game three.”

Even so, talent matters, experience matters, and discipline matters. The 2017 Harvard team ranks well in all categories. Football plays barely last longer than this sentence, but make no mistake—the sport requires endurance. Crimson seniors know that.

They’ve withstood so much. They’ve continued. And they still have so much to accomplish.