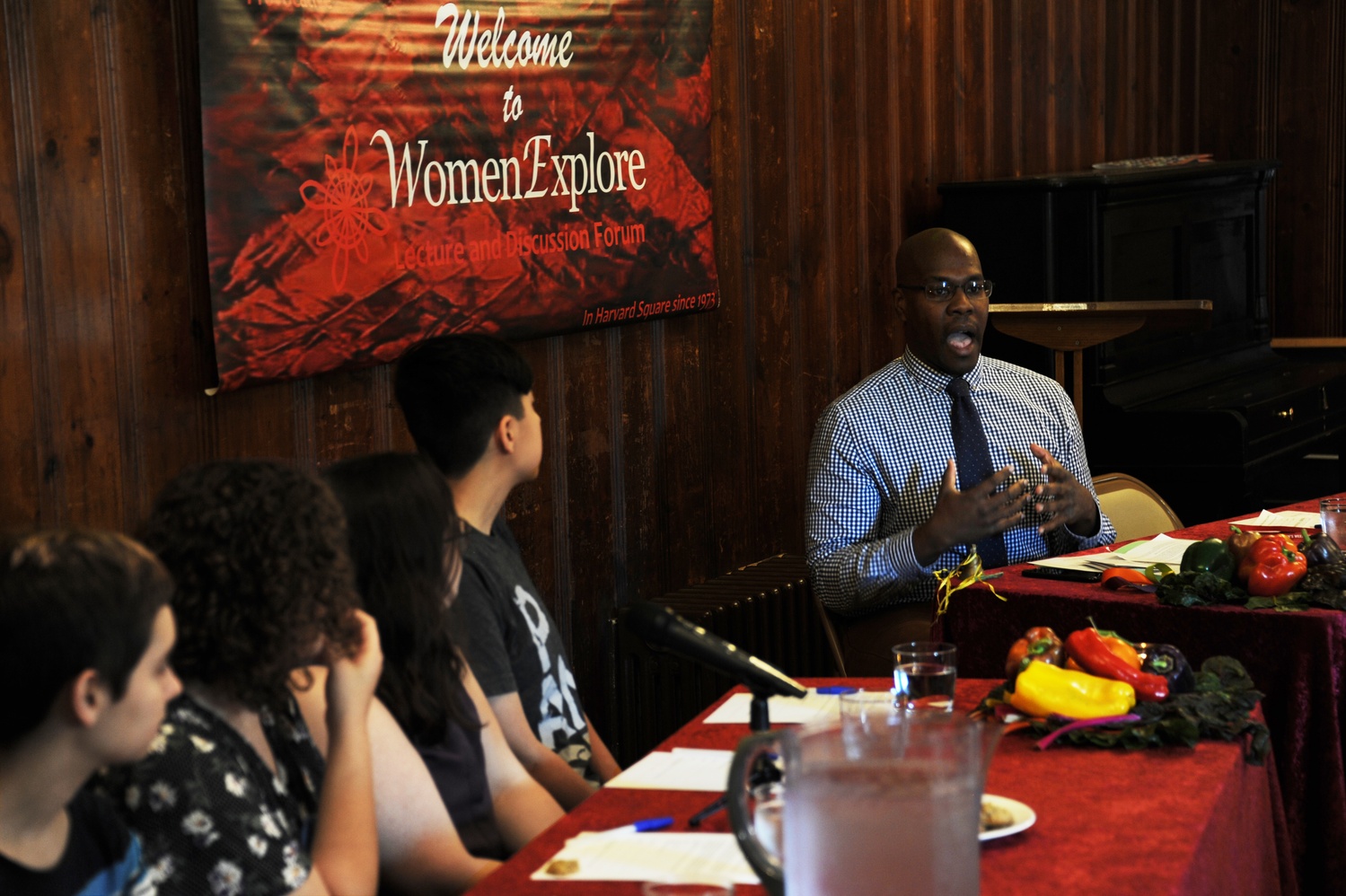 Director of BGLTQ Student Life Sheehan D. Scarborough '07, right, introduces a panel of speakers at the Democracy center Thursday. Scarborough indicated at the event that the College is reviewing a policy that bars freshmen from living in gender-neutral housing. By Derek G. Xiao
By Shera S. Avi-Yonah, Contributing Writer

The College is currently reviewing proposals to add a gender-neutral housing option for freshman, according to Director of BGLTQ Student Life Sheehan D. Scarborough ’07.

Speaking at an event Thursday at the Democracy Center, Scarborough said the Freshman Dean’s Office is currently “moving forward with proposals” and will “incorporate the suggestions that students have been making” to the College on gender-neutral freshman housing.

Since 2014, rising sophomores, juniors, and seniors have been able to request gender-neutral living arrangements in the upperclassman Houses. Because the College assigns first-year roommates, however, freshmen seeking gender-neutral housing must contact the BGLTQ Office and the FDO individually to "find what's best," a freshman yard resident dean said last year.

A subsequent joint statement issued by the FDO and the BGLTQ Office did not specify when the change in policy would occur.

“Students and staff from the FDO and the Office of BGLTQ Student Life are currently exploring options for expanding gender-inclusive housing to the first year class,” the statement read.

Also at Thursday's panel, Jessica R. Fournier ’17, Lily M. Velona ’18, Helene Lovett ’20, and Ming Li Wu ’21 discussed gender identity at Harvard and spoke about challenges stemming from the current housing policy, as well as other relevant policies at the College.

Panelists said that despite administrative efforts aimed at supporting students of all gender identities, there is still progress to be made.

“No University documents that have my gender have my gender correctly,” Velona said. “[During] any trip to any bureaucratic office, especially as someone who is lucky to pass [as female] really easily, it’s just never brought up.”

Lovett mentioned that on-campus housing in particular presents a set of challenges for students who do not identify as male or female.

“You basically have to out yourself on the first form you fill in coming to college. It forces us to have this weird, personal, invasive meeting with the Freshman Dean’s Office… hopefully we’ll make progress on that soon,” Lovett said.

Scarborough also spoke about the pace of change on BGLTQ issues at the College and his excitement about recent progress.

“It’s interesting seeing how long things can take, especially at an institution as old and as centralized at Harvard. When you get that moment when something seems to be changing, you kind of hold on to it,” Scarborough said.

The panelists emphasized the importance of being sensitive to pronouns and other gender-specific language.

“Gendered language is such a part of everyday life. To use someone’s pronouns is a way of acknowledging them as a person,” Fournier said.

Wu also spoke about the process of exploring gender identity.

“Some days I feel more feminine, some days I feel more masculine. Some days I want to wear clothes more traditionally associated with men, and some I don’t,” Wu said. “Everyone goes through this, for some people it’s just bigger changes. I’m at a place right now where I’m okay with my identity changing, cause I think that’s just a natural part of life—your identity will fluctuate, you’re not a static person.”