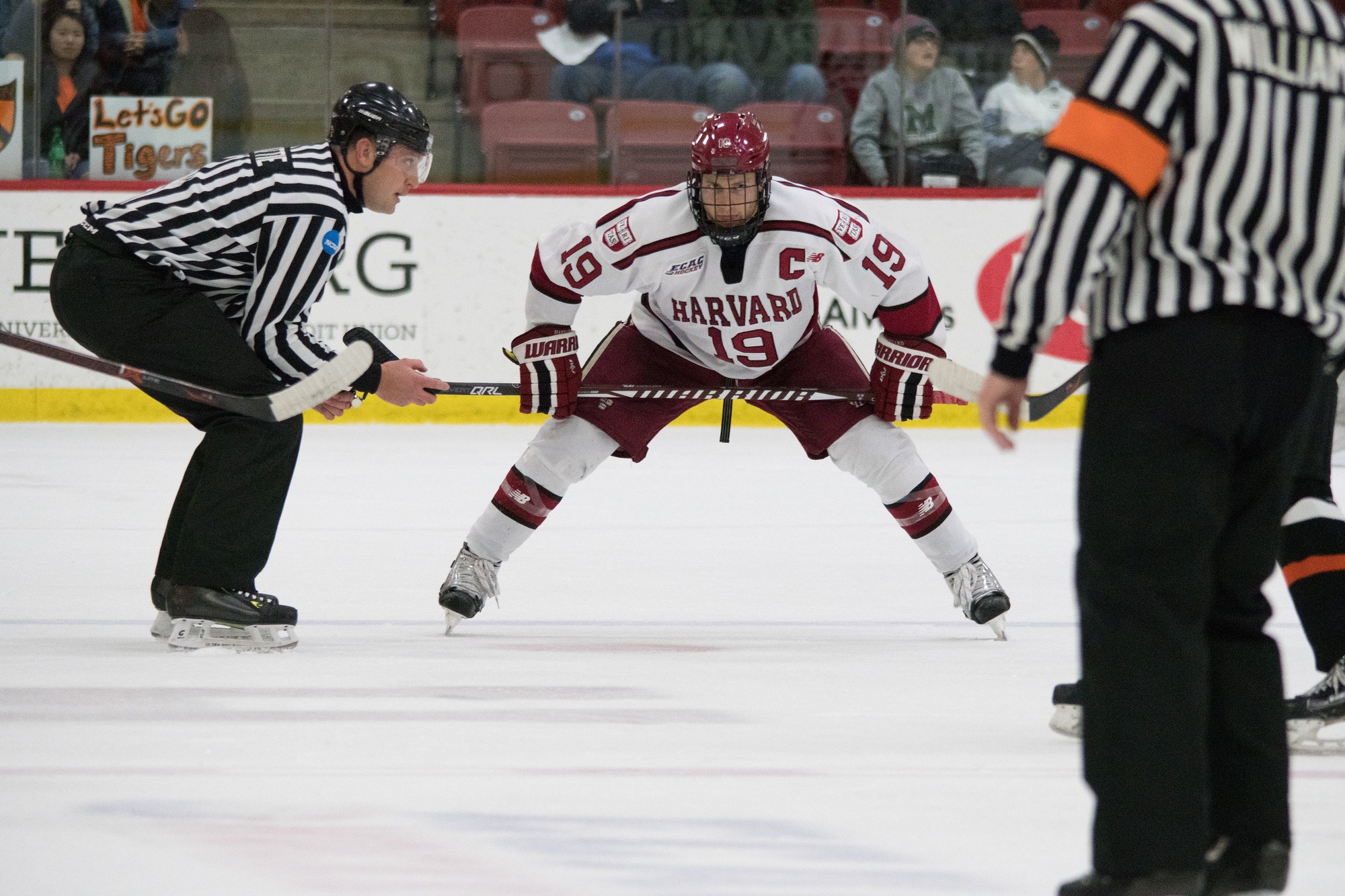 The Crimson picked up three out of a possible four points this weekend in a pair of ECAC matchups. With the Beanpot fast approaching, not to mention the Olympic hiatus of junior forward and offensive centerpiece Ryan Donato, points are of maximum importance. By Megan M. Ross
By Spencer R. Morris and Stuti R. Telidevara, Crimson Staff Writers

In early December, the Harvard men’s hockey team traveled to Princeton and Quinnipiac looking to right the ship after a disappointing stretch of games the month prior. That weekend proved to be a success, as the Crimson returned to Cambridge with four points from two decisive victories.

This weekend, the team once again squared off against these ECAC foes, only as the home team this time. And while Harvard (8-6-3, 7-3-2 ECAC) entered the weekend on better footing than it did back in December—the squad has not suffered a loss in 2018—the conference points on the line were just as crucial to the Crimson’s season.

“Moving forward, games only get harder as teams start to realize where they’re falling in the standings,” said tri-captain goaltender Merrick Madsen. “We need to get wins where we can…. With the Beanpot games, the way they line up we usually have some weekends where we have one game, and it’s easy for teams to leapfrog us in those situations.”

Special teams almost stole the show in Saturday’s afternoon matchup between the Crimson and the Bobcats, but the tilt ended in a tie after junior forward Ryan Donato notched the game late. Five minutes of overtime proved unhelpful in deciding a victor.

With just three and a half minutes remaining, sophomore blue-liner John Marino intercepted the puck deep in the Quinnipiac zone and shoved it toward the cage. While commotion ensued around the blue paint, the puck popped out to the left of Bobcats net-minder Keith Petruzzelli, where a falling Donato punched in the equalizer.

“I saw some bodies fly,” Madsen recounted “Then I see the puck pop out to Ryan and the goalie trying to get across…. I saw him get it, and I’m like, ‘that’s got to be it,’ and he sure enough put it in. Everyone was ecstatic.” 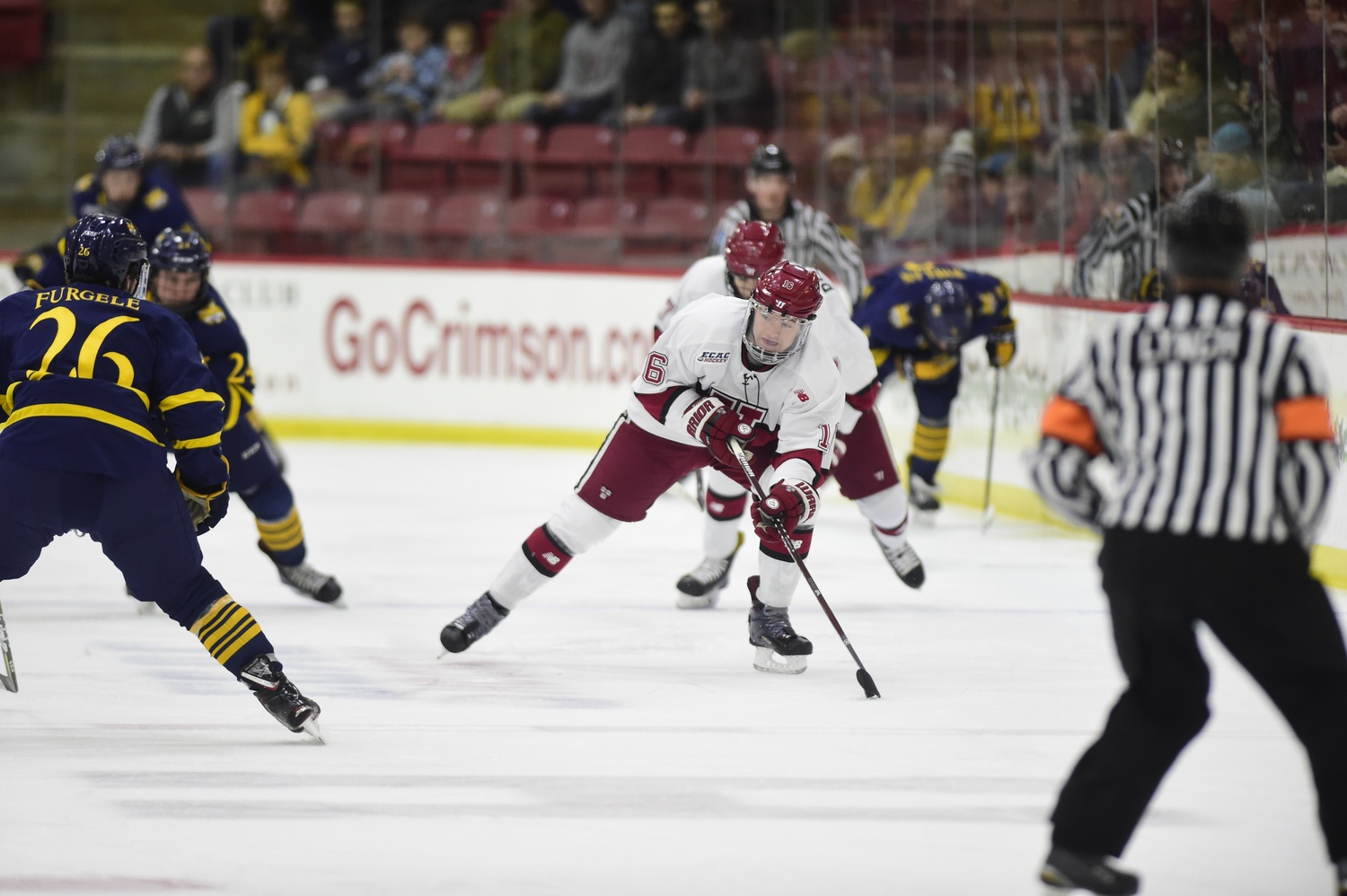 After being held off the score sheet for the first time all season last Tuesday, junior forward Ryan Donato recorded three goals this weekend and remains on a NCAA-best goal-per-game pace. By Courtesy of Gil Talbot/Harvard Athletics
Advertisement

Despite the unexciting nature of a draw, Harvard’s third overtime game in its last four contests ended in dramatic fashion, as Donato—unsurprisingly—was in prime position to score the game-winner with just five seconds on the clock.

Instead of firing a quick shot through traffic, the Boston Bruins prospect elected to deke around Petruzzelli. By the time Donato looked to score, a defender had closed on him and he was forced to take the puck behind the net, where time expired.

“It would have obviously been a really cool moment again, had we pulled it off,” Madsen said. “But I was happy that we were able to battle back…and pick up some points.”

Had Donato scored, the Crimson would have yet again stolen an overtime game in the waning seconds. Last Saturday, freshman forward Henry Bowlby buried Union with 5.1 seconds remaining in the extra frame.

“I love the fact that our guys play until the final buzzer,” coach Donato said. “I think there were a lot of good things, even though looking back, we feel like the first period wasn’t our best and put us in a spot where we were chasing more than we would’ve liked early on.”

Prior to Harvard’s equalizer, the man-advantage helped the Bobcats build a one-goal lead. In the first period, senior forward Bo Pieper drew first blood on the power play with his sixth tally of the season and his third in the last five contests.

Later, at the tail end of the second frame, Quinnipiac struck again with the extra man, this time coming from the stick of captain and defenseman Chase Priskie. Posted up at the right circle, Priskie received a wheelhouse feed from freshman forward Odeen Tufto and rocketed a one-timer over Madsen’s right shoulder. The Washington Capitals draft pick recorded a two-point night, as he picked up an apple on the Pieper goal as well.

Unlike the opposition, the Crimson’s power play was unsuccessful in Saturday’s matinee, failing to convert on any of its three opportunities with the man-advantage. Man-up struggles have been a negative trend in Harvard’s play of late, despite the squad’s lossless 2018.

“Sometimes you get some bounces and sometimes you don’t,” Crimson coach Ted Donato ’91 said, somewhat optimistically of his power play. “Tonight, we had at least two times…that the puck was rolling, where it looked like it was going in, and somehow stayed out of the net. But I thought we were moving the puck and getting the type of looks and the type of opportunities that we’re trying to get.”

Since the new year, Harvard has executed on just one of its 17 power play attempts (7.1% effective), good for fifth-worst in the country over that span. Only five programs entered Saturday’s tilt with a worse mark in 2018, with the Bobcats being one of them. Needless to say, Quinnipiac broke out of its power play slump in the draw with the Crimson.

Despite a physical game that saw 13 infractions whistled against the two teams, it was ultimately not the man advantage that tipped the scale for the Crimson in its Friday night victory over the Tigers.

Sustained offensive effort had Harvard leading, 1-0, early in the second period. With the Crimson on the power play, Princeton senior forward David Hallisey found the puck on his stick and charged down the ice on a breakaway. Hallisey deked around Madsen and got a shot off, but the senior net-minder, stretched out as far as his six-foot-five frame would allow, flashed the leather and snatched up a certain goal.

The fans couldn’t believe their eyes—and neither could the referees, apparently, as the play was reviewed to confirm the save. Madsen’s acrobatics secured momentum for the Harvard icemen, who held onto their lead for the rest of the night.

“The breakaway save he made in the second was an amazing save,” coach Donato applauded. “Ryan Donato was in the slot about to shoot, and his stick broke. And a guy that had been injured for them had changed, so that’s what led to them getting a guy behind us…. They got a breakaway on it, and it really could’ve changed the feeling of the game, but Merrick just did not quit on the play.”

Madsen’s numbers show that he was once again confident between the pipes, making 35 of 36 saves (.972 SV%) and posting a shutout through the first 40 minutes. 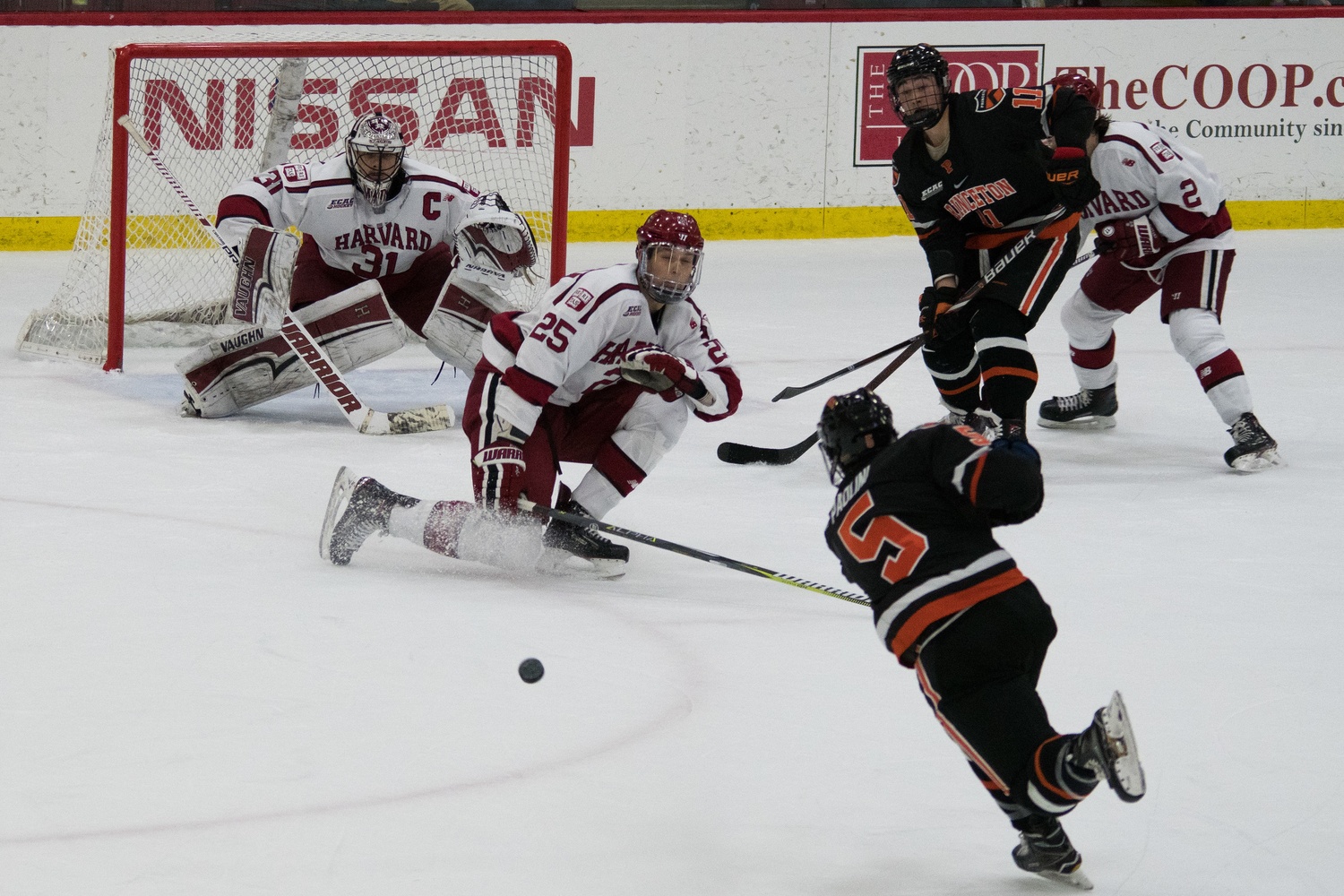 Tri-captain Merrick Madsen nabbed a pair of victories this weekend and looks to be comfortable between the pipes after briefly losing his starting role to junior backup Michael Lackey in December. By Megan M. Ross

“I thought Merrick was outstanding, especially in the first and second periods,” coach Donato said. “[He] gave our team a great amount of confidence, the way he was playing.”

The Arizona Coyotes prospect was not the only player to have a major impact on Friday night’s tilt. Donato bounced back from his first scoreless performance of the season last Tuesday with a two-goal effort against the Tigers.

The Scituate, Mass., native opened the scoring with half a minute to play in the first frame, picking up a rebound from sophomore forward Ty Pelton-Byce in the slot and shooting clear over the shoulder of freshman backstop Ryan Ferland. Though the Crimson left the ice after 20 with just a one-goal lead, the team outshot Princeton 18-6 in the first period.

“Something that we’re trying to work on is having better starts,” Madsen said. “We want to have every line get out there in the first five minutes or so…. Getting off to a good start like that helps continue through the period and through the game. You don’t want to be chasing a game.”

The home team’s offensive push continued into the second frame, when freshman forward Jack Badini skated around the Tigers’ defense shorthanded and beat Ferland glove-side, extending Harvard’s lead to 2-0. Later in the period, Donato found twine once again with a snipe to the far corner.

On Friday night, Harvard’s goal-scorers added to their impressive point totals—Donato scored his team-leading 16th goal in as many games, while Badini passed the double-digit points threshold with his game-winning snipe.

After potting the game-tying puck on Saturday, Donato has remained on a goal-per-game pace and leads the nation in that regard. In addition to his pair of tallies, the recently announced Olympian had 10 of the Crimson’s 42 total shots on goal on Friday. 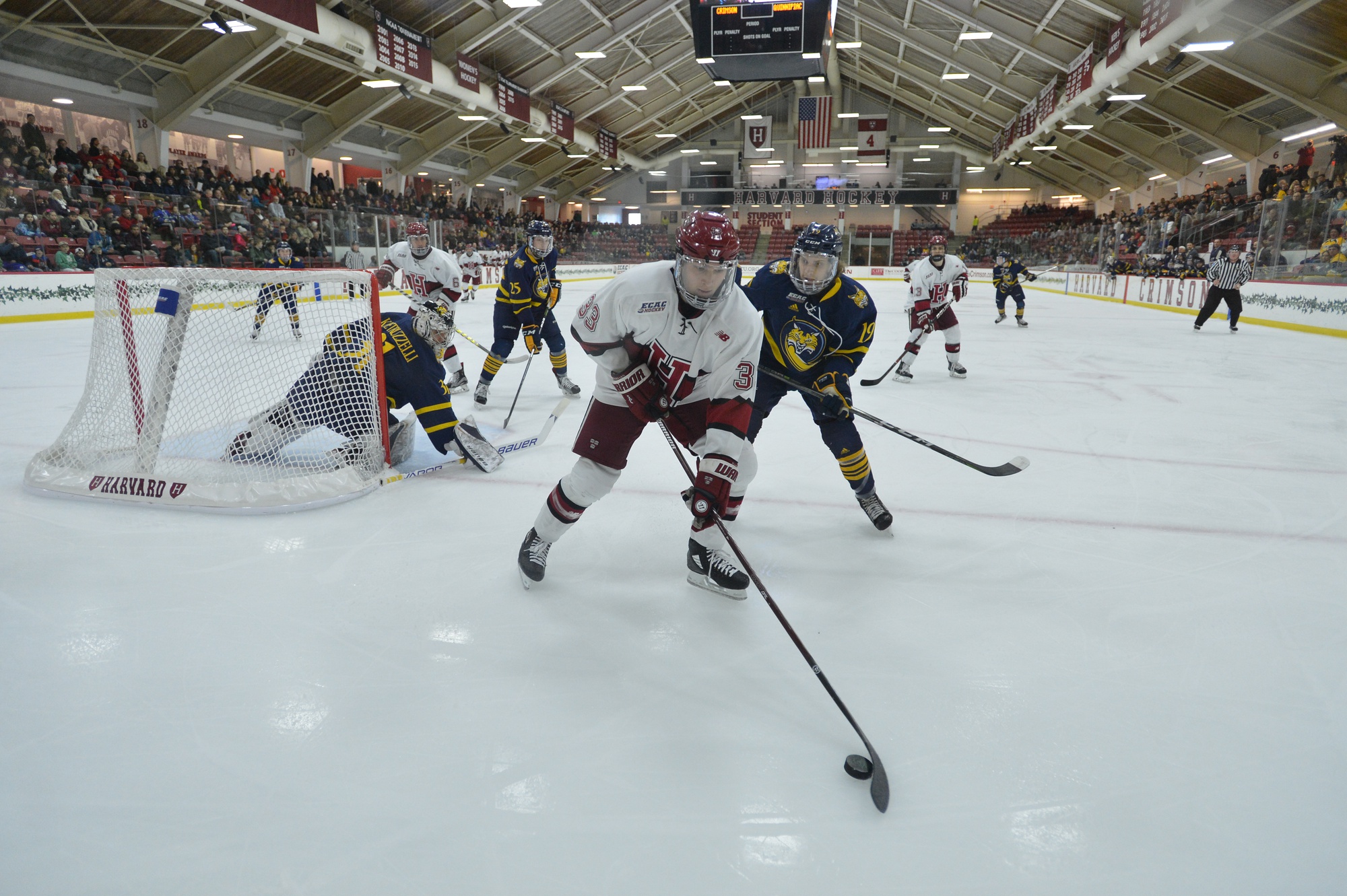 Freshman forward Jack Badini finished with two strikes on the weekend and has played at a point-per-game pace over his last five contests (3-2—5). By Courtesy of Gil Talbot/Harvard Athletics

“I was really happy with the urgency,” Madsen said, praising the offense. “The one thing that we’ve had a ton of this year is effort…. I think it showed Friday night—the first two periods especially.”

“I thought we came out and took the play to them in the first couple periods,” the bench boss said. “We were able to establish some offensive zone time and have some great opportunities. Our power play didn’t score but created a lot of momentum.”

Pelton-Byce had a good showing too, picking up two assists. The sophomore’s effort earned him a line promotion the following night and a chance to play alongside Donato, the finisher of his two helpers on Friday.

Pelton-Byce’s roster mobility was made possible by the continued absence of freshman Henry Bowlby, Donato’s usual left-winger, due to illness—an ailment that could sideline the rookie for a few weeks.

Princeton eventually generated some offense of its own and foiled Madsen’s plans for a shutout. A little over a minute into the third, the Tigers struck gold on the power play. Sophomore Jackson Cressey collected a cross-ice pass and beat the otherwise perfect Harvard tender.

Despite Cressey’s man-up score, the Crimson successfully killed off Princeton’s five other power play opportunities on Friday night. The team’s recent success on the kill brought Harvard’s man-down efficiency into the top 10 nationwide—that is, until the Crimson conceded two power play strikes to the Bobcats in Saturday’s matinee.