Men's Hockey Tops St. Lawrence in Yet Another OT Game

The Crimson has now played extra hockey in five of its last six tilts, going 3-0-3 in that span 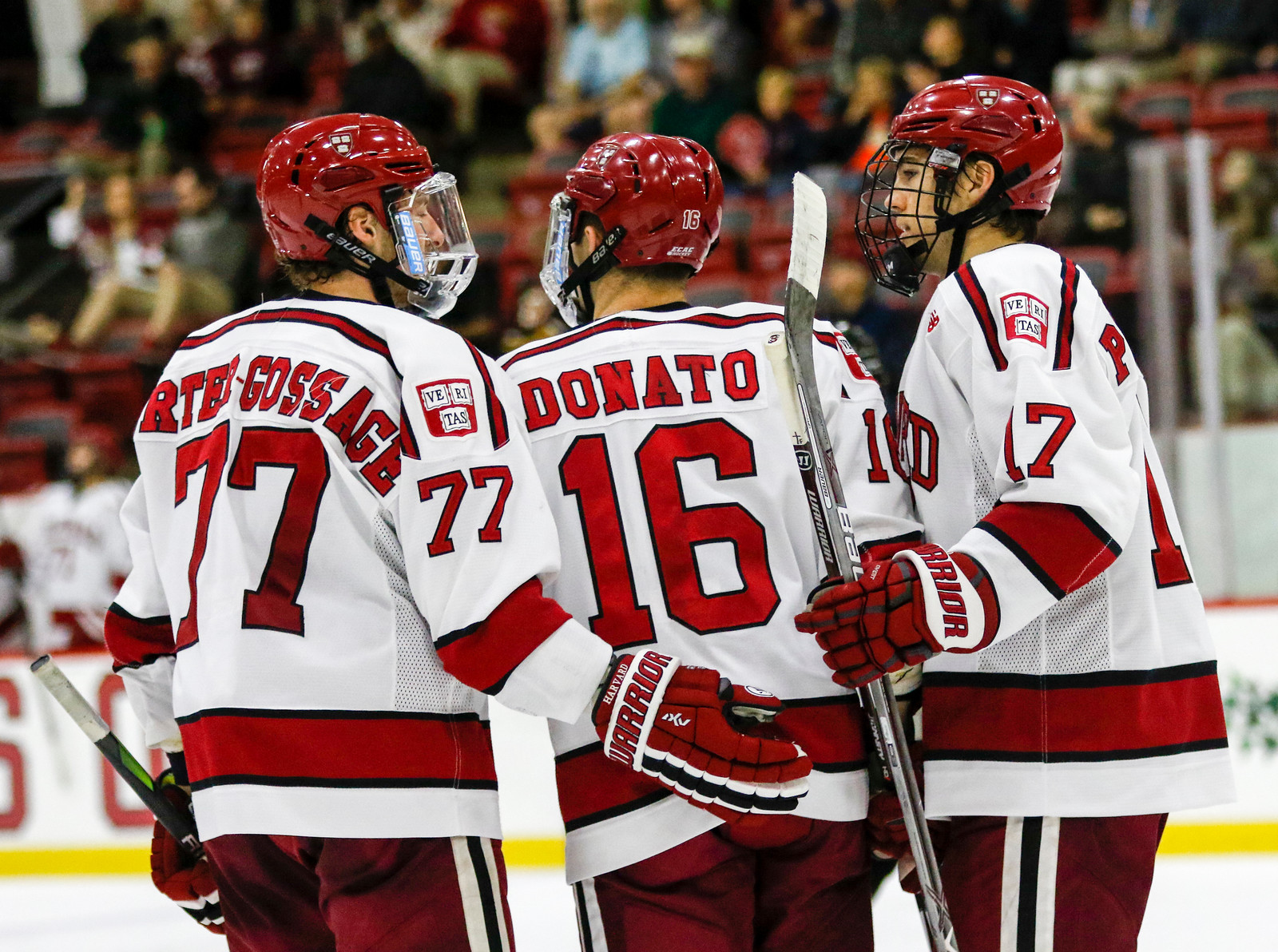 The Harvard men’s hockey team hardly has a storied rivalry with St. Lawrence. As the teams faced off for overtime on Saturday night, though, the boos that filled Appleton Arena could’ve fooled anyone.

In a game with multiple momentum shifts and an audience that only got more boisterous, the Crimson put away the 4-3 win in overtime, and returned from its annual weekend in the North Country with three of four points.

“We feel fortunate to get the win tonight,” said Harvard coach Ted Donato ’91. “We probably could have done some things to close the game out when we had the lead, but give them credit.”

Saturday night marked Harvard’s fifth overtime game in its past six contests. Despite the extra mileage on the team’s legs, this stretch has treated the Crimson icemen well, as they are 3-0-3 in that time.

“We’re a good 5-on-5 team,” said the younger Donato when asked about the team’s approach to extra hockey. “We like to get it behind their D...to the point that they get worn down. Especially when we’re playing late in a game or going to overtime, that’ll matter for us.”

Despite the home team’s winless ECAC record and Harvard’s 3-1 lead early in the third period, St. Lawrence managed to tie the game with less than one minute remaining in regulation time.

Senior Mike Marnell, who had already scored on a shorthanded breakaway in regulation, almost had a second go at Lackey in overtime. A diving glove save kept the Crimson in it.

“They were playing hard,” coach Donato said. “Lackey made a huge save there.”

Soon after, Harvard sophomore Nathan Krusko’s shot went wide of the cage. Freshman Jack Badini jumped on the puck, banking it off the pads of junior goalie Arthur Brey and over the goal line. Much to the crowd’s dismay, a review confirmed the play as a good goal.

“[It was] maybe a little fortuitous bounce off the end-wall,” Badini recalled. “I just went to the net and shoveled it in...I’m pretty happy about that.”

The hosts broke the ice early in the first, as St. Lawrence senior forward Ryan Lough cleaned up a rebound past a falling Lackey. Only a few minutes later, though, Donato notched two quick goals on near-indistinguishable snipes from the left circle, giving the visitors a 2-1 lead midway through the first 20.

Linemate and fellow junior Lewis Zerter-Gossage nabbed a pair of primary assists on the goals, which also demonstrated the smooth puck-moving abilities of sophomore defenseman Adam Fox. Incidentally, the two are now tied for the most assists (12) on the team.

Donato’s two tallies give him sole possession of the NCAA goal-scoring lead, as the recently-named Olympian is the first skater to 20 goals this season. The 19 games in which he reached that milestone are the fewest played of the top 30 goal-scorers nationally.

“I’ve got two great linemates, Pelton-Byce and Zerter-Gossage,” said Donato, spreading the praise. “One of the things I can do well is put the puck in the net; these guys put me in good situations.”

The second period, while goalless, saw Harvard kill both its penalties with some sprawling saves on Lackey’s part. A 5-on-3 for the Crimson early in the third frame proved fruitful, as Zerter-Gossage dug the biscuit free of a scramble in front of the net and stuffed it past a stretched-out Brey. Zerter-Gossage’s three-point night brings him to 19 overall, good for second on the team.

The weekend’s valuable three points maintain Harvard’s position at fourth in the ECAC as of Saturday night. As conference standings begin to settle, the Crimson will look to grab every point it can get.

“Knowing this league, every point is enormous,” coach Donato said. “[It] could be the difference between going on the road or having home ice or having a bye.”

In the nearer future—the ECAC tournament is still weeks away—Harvard will return home for tilts with Cornell and Colgate as it looks to avenge a two-loss weekend and heartbreaking defeat at Lynah Rink back in November.