Men's Hockey Shut Down by Cornell and Freshman Goalie 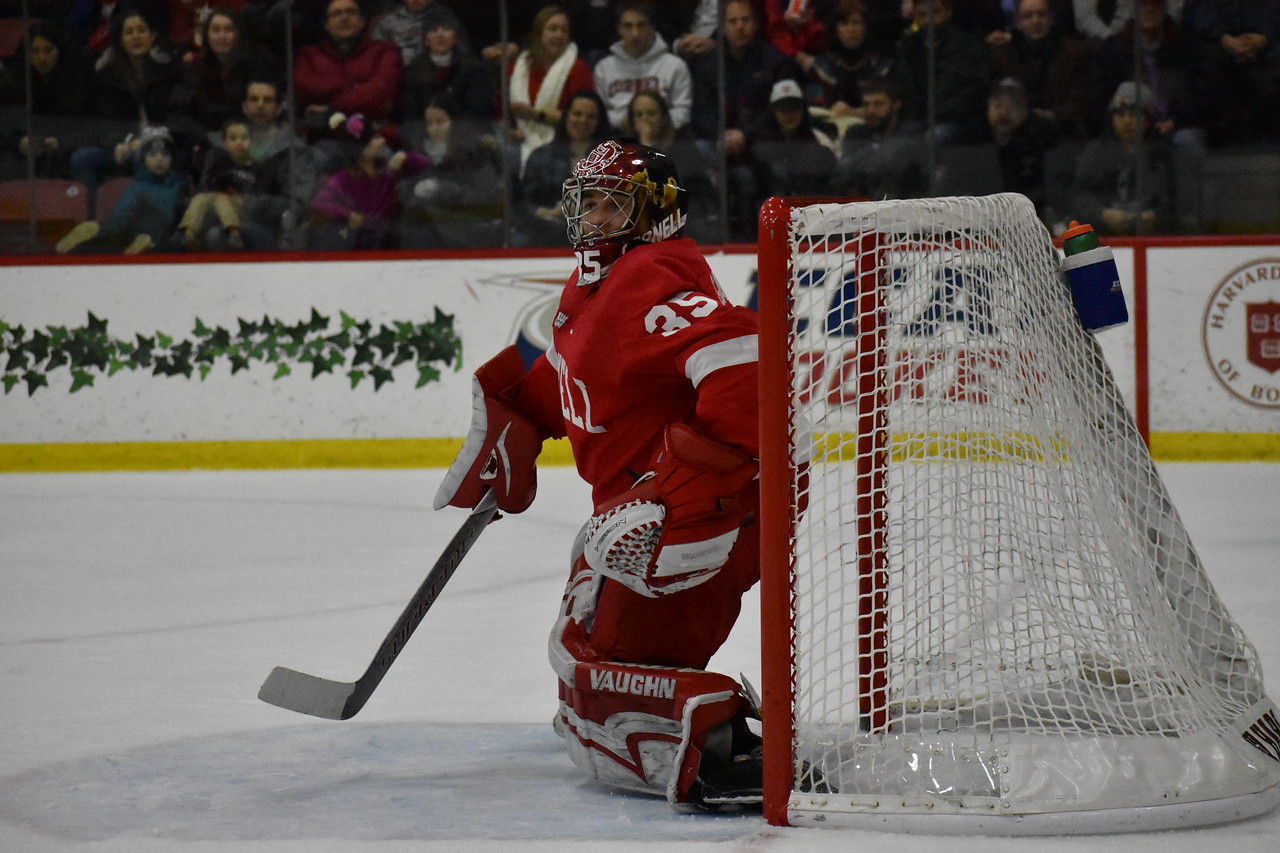 Not many goaltenders blank the Harvard men’s hockey team, so it takes a special net-minder to do so. On Friday night against No. 2/4 Cornell, however, the Crimson (9-7-4, 8-4-3 ECAC) ran into a very special goalie indeed.

This goalie was freshman Matthew Galajda, who sent back all 35 of Harvard’s shot attempts en route to his third straight shutout in a 3-0 victory for the Big Red (17-2-1, 11-1-1). The bout marks the Crimson’s first goalless game since almost exactly one year ago, when RPI shut down the squad on Jan. 29, 4-0.

“[Galajda] is calm,” Cornell coach Mike Schafer ’86 said. “He doesn’t get run around or sliding around in there. He stays focused…. He’s playing well, and our guys are selfless. They’re laying it out, blocking shots when they have to.”

Harvard came into the game seeking vengeance after November’s heartbreaking loss, which saw the Big Red steal the game in the final seconds. That evening, Crimson Coach Ted Donato ’91 and his team left Lynah rink feeling robbed, confident that their play warranted a better result than a regulation defeat.

Friday, though, there was no question which team deserved the victory.

“I was more frustrated the first time we played them,” coach Donato admitted. “I thought we played better and deserved a better fate. They deserved to win tonight. They made the plays, they blocked the shots, they made the saves.”

After a Cornell goal just eight minutes into the tilt, the game remained a one-shot affair until early in the third frame when the Big Red padded its lead. The culprit was a repeat offender, as junior forward Anthony Angello was responsible for all three Cornell goals on the evening.

The Pittsburgh Penguins prospect reached the double-digit goal plateau with six and a half minutes expired in the third period. Angello’s wrister rung off the pipe before bouncing off the back of Harvard goaltender Michael Lackey and trickling over the goal line.

“They got a bounce on the second goal,” coach Donato said. “They’re playing defense at a level right now that made that [two-goal lead] look like a pretty steep hill to climb.”

Angello followed up with an empty-netter with just one second remaining in the game, completing the hat trick. The Manlius, N.Y., native now has nine goals in as many outings. 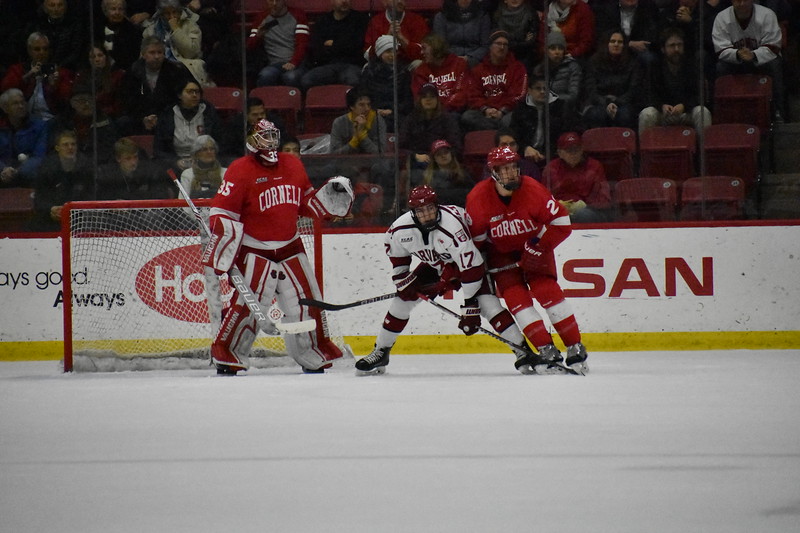 While providing some cushion to the Big Red’s lead, Angello’s three-goal effort proved unnecessary. Galajda, who entered the contest with the second-best goals against average and fifth-best save percentage in the NCAA, demonstrated why his numbers are so stellar.

The rookie stood tall between the pipes all night, recording his sixth clean sheet this season in 17 appearances.

“I’m seeing the puck well,” said Galajda of his recent play. “There [were] a couple of plays out there where maybe I got a little lucky tonight. The puck seems to be bouncing our way right now, and [we’ll] keep it rolling tomorrow night.”

The Crimson’s 35 shots were no match for Galajda, who saw most of Harvard’s chances cleanly.

“I would’ve liked us to make it a little bit more difficult for [Galajda],” coach Donato said. “I don’t think we got enough traffic, I don’t think we made him [scramble] around the front of the net. But hats off to him.”

Solid puck fielding also kept the home team in it for the majority of the game. Lackey sent away 25 shots (2.07 GAA, .926 SV%) and made some crucial stops for the Crimson. At the end of the day, a hard-to-read release and a bad bounce bested him.

The second period began much like the first ended. Chances were scarce, but many were grade-A looks—the only difference being that Harvard started accumulating more shots on goal than the opposition. By the end of the frame, the pace resembled that of a typical bout between these two fast and skilled teams.

While Cornell led the shot count 7-2 at one point in the opening third, the Crimson ultimately overtook this category and took a 20-13 advantage into the locker room after 40 minutes. A power play straddling the midway point of the second period opened up the offense for Harvard while giving the Big Red a series of counter-attack rushes.

“I thought the second period was our best,” coach Donato reflected. “The first 10 minutes of the game, they pinned us back a little bit. The second 10, I thought we played pretty well. And then the second period, we had chances.”

Despite multiple sequences of pandemonium in front of Galajda and a few point-blank opportunities on Lackey, the net-minders rejected all 19 shots they collectively faced in the frame. 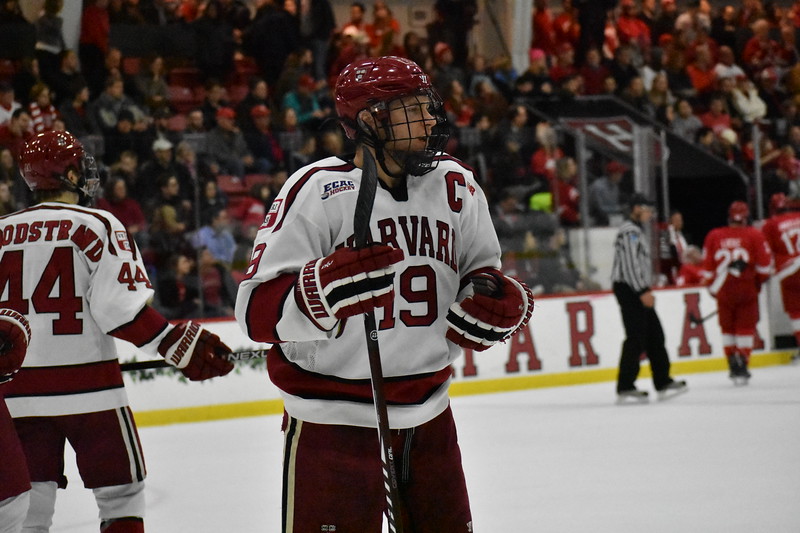 Crimson tri-captain Jake Horton pauses for a breather during a 3-0 loss to Cornell. By Amanda M. DiMartini

Back in November, it was Harvard who got off to a hot start and drew first blood. As the goose egg would indicate, this was obviously not the case Friday night. Angello lit the lamp seven minutes into the contest.

The junior strode into the zone and slipped through two Crimson defenders. Then, the 6’5” winger got his hands free for a split second and cleared Lackey’s shoulder with a quick-release snipe. The tally ushered in the jeers of invading Big Red fans, traveling in droves as always.

The early strike was one of many quality scoring opportunities for the two teams in the first frame. While the foes exited the ice after 20 minutes with just seven shots apiece, the majority of them were in prime position. Both Galajda and Lackey faced frenzies in front of their respective nets but managed to keep the rest of the pucks from crossing the goal line.

Most notably in the opening third, junior forward Michael Floodstrand fired a shot low on the Big Red backstop, who kicked the puck out into the high slot. Floodstrand’s linemate Benjamin Solin was there to corral the rebound and send another attempt toward Galajda, but the freshman tender gobbled up the second-chance shot.

Like his fellow Harvard icemen on Friday, junior forward Ryan Donato failed to notch a point. This marks just the second game all season in which the 2018 Olympian failed to ink the score sheet. 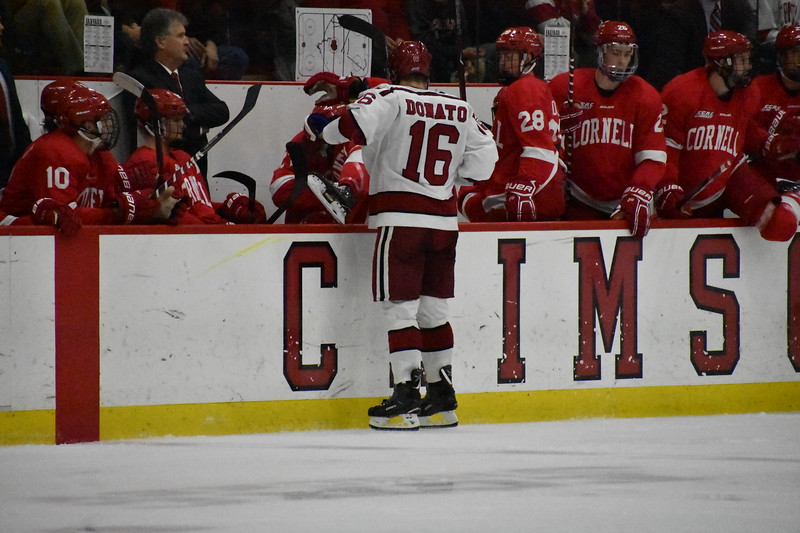 Harvard's Ryan Donato gives a not-so-friendly helping hand to a Cornell opponent on a line change. By Amanda M. DiMartini

“All four lines knew when [Donato] was on the ice,” coach Schafer said. “You better play him one-on-one strong. You better keep your feet moving against him, especially as a defenseman…. If you spread your feet and try and play him, he’s going to make you look silly. He got to the other side on us a couple of times tonight, but that’s fine. He didn’t get to his forehand.”

Cornell’s decisive shutout removed any doubt lingering from the teams’ last meeting, in which the Big Red ran away with the game in its waning moments.

“It was awesome beating Harvard at home,” Angello said. “Getting them 2-0 [on the season] here…especially when they don’t score, it’s definitely something really special.”