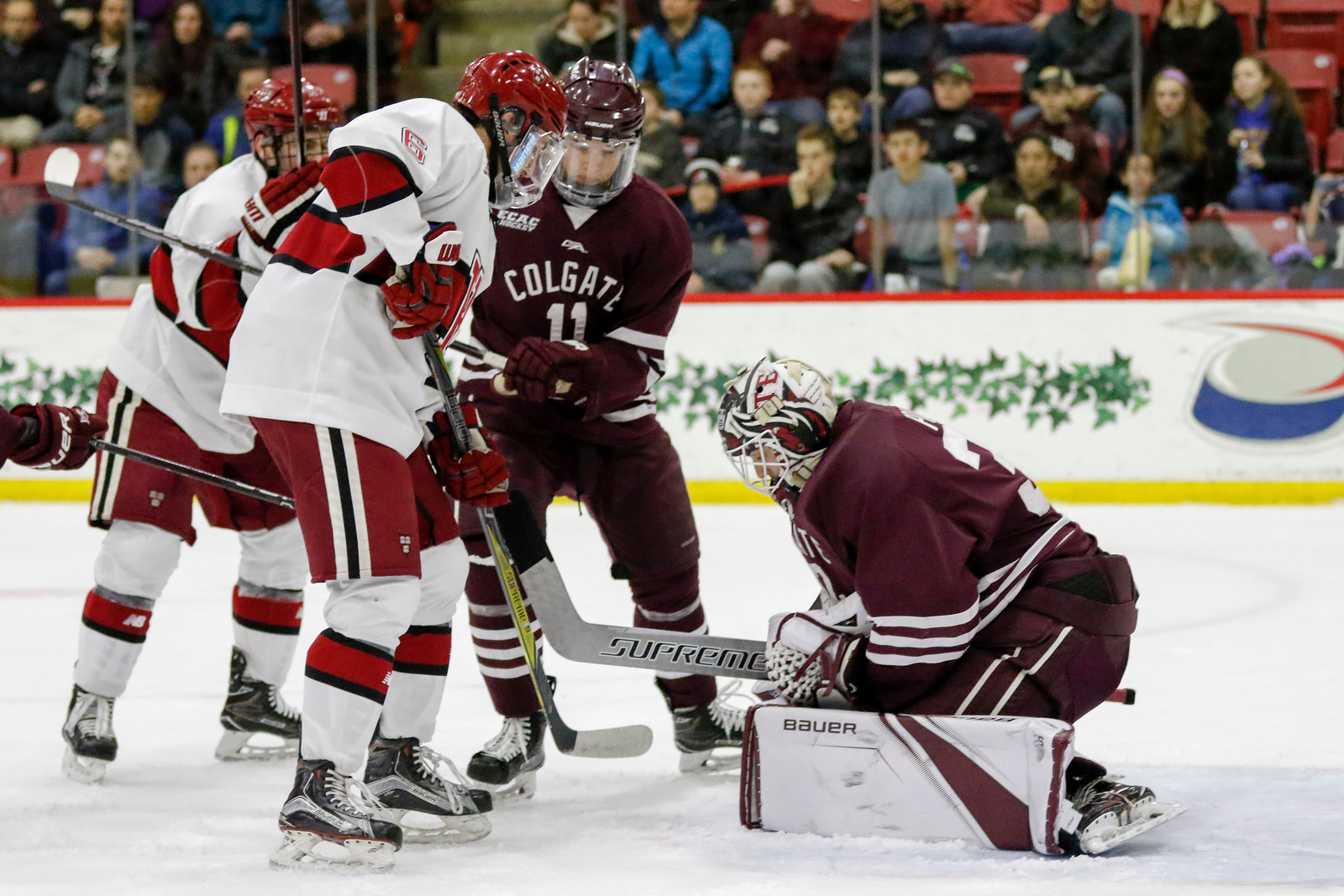 Colgate sophomore Colton Point stood tall in net to deny all 51 of Harvard's shots. He now leads the ECAC with a .945 SV%. By Timothy R. O'Meara
By Stuti R. Telidevara, Crimson Staff Writer

Few net-minders outplay the Harvard men’s hockey team not once, but twice in a season. Colgate sophomore Colton Point appears to be one of them, however. In three career appearances against the Crimson, he’s sitting pretty on a .990 SV%. Saturday night was no different.

Harvard (9-8-4, 8-5-3 ECAC) threw shot after shot at the Raiders’ net, only to be held off the scoresheet entirely in a disappointing 2-0 loss. For his part, Point hit a new career best of 51 saves on the night to loud applause from visiting fans. But the Crimson won’t give all the credit to a hot goalie after going scoreless on the weekend.

“It’s frustrating,” said Harvard coach Ted Donato ’91 more than once after the loss. “[But] you have to find a way to break through. It’s not good enough to say we ran into [Point] and we got a lot of shots.”

The Crimson’s unfruitful night was not for a lack of trying. Harvard outshot Colgate (11-11-4, 7-6-1) by 10 in each period of the game to a total of 51-21, and the middle period especially saw chaotic scrambling in the Raiders’ blue paint. On one play, a shot from the point caught junior forward Lewis Zerter-Gossage between the skates as he tried to fight off a Colgate defender right in the slot.

Falling, Zerter-Gossage poked the puck through between Point’s legs and it trickled free behind the goaltender. But a roaring Bright-Landry was ultimately disappointed, as Point caught the puck with his paddle before it could cross the goal line.

“I saw the puck go through me, “ Point recalled. “I looked back and got my stick down in time… It’s a lucky save, but when you’re working hard, you tend to get bounces your way.” 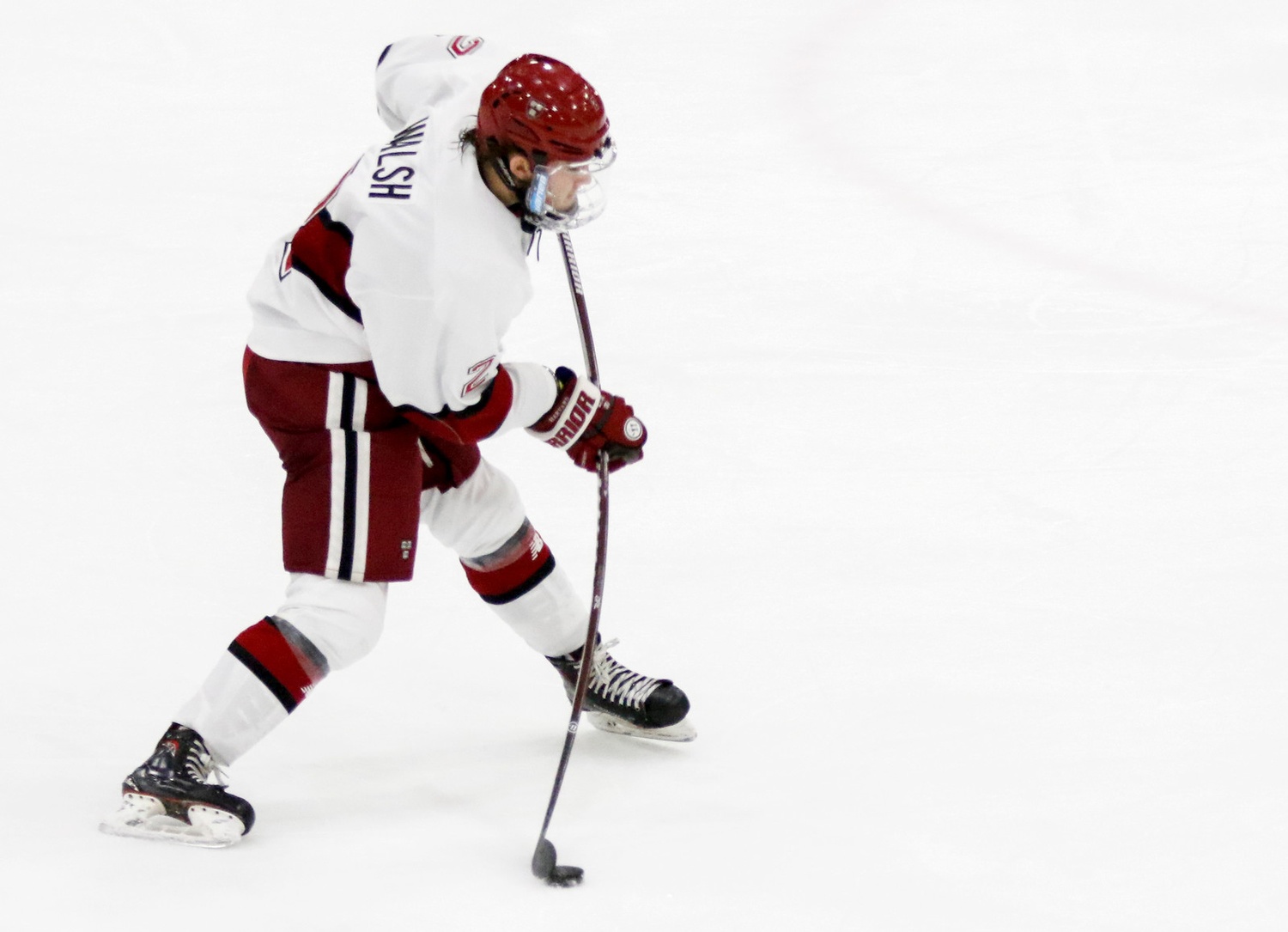 Despite plenty of attempts from Harvard's defensive corps, including wristers from the point by Reilly Walsh (pictured here), the Crimson struggled to cash in on what few rebounds Colton Point left out in front of him. By Timothy R. O'Meara

The game’s result rested just as much on special teams as it did on Point. After going a perfect 3-for-3 the night before on the penalty kill, the Crimson conceded both Colgate tallies while playing a man down. Both shots came from just beyond the right circle, beating tri-captain goalie Merrick Madsen near-side through some traffic.

The first, 14 minutes into the opening period, was off the stick of junior defenseman Willie Brooks after a clean Raiders faceoff win. The second came from sophomore forward Bobby McMann with a tired penalty-killing unit on the ice, early in the third.

Madsen made his first start in net after watching two games from the bench, having conceded five goals—including a slapshot from beyond the blue line—against Clarkson on Jan. 19. Despite what the shot totals might suggest, Madsen did have to fight off several quality Colgate chances, including odd-man rushes and point-blank looks from the slot. 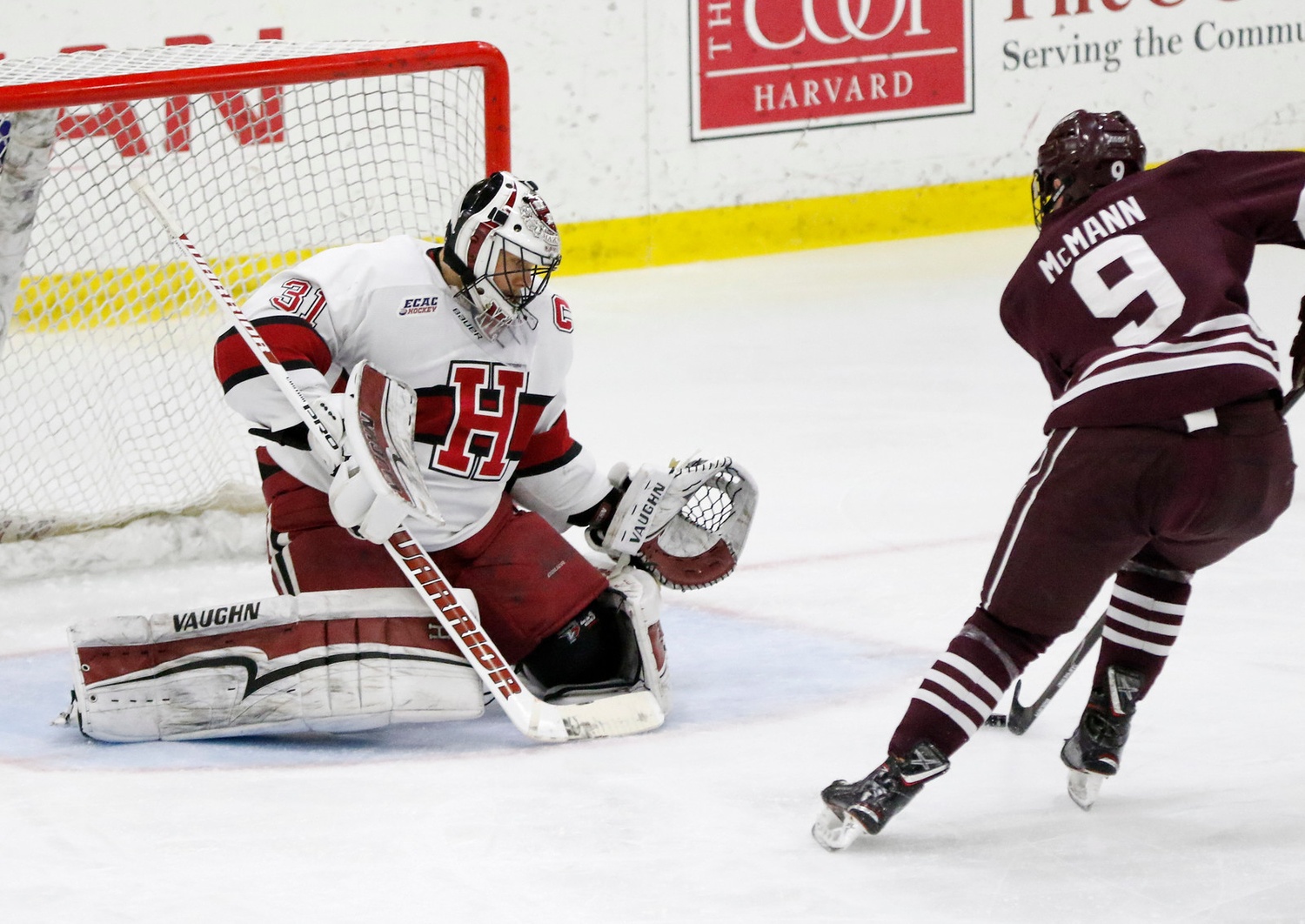 Colgate sophomore forward Bobby McMann scored the Raiders' second goal of the game on a wrist shot that made its way through heavy traffic in front. The tally was McMann's 11th of the season. By Timothy R. O'Meara

Alas, hockey cannot be won without scoring goals. This weekend, Harvard was shut out in consecutive games for the first time since 2011, when it fell at Yale and to Northeastern on Feb. 4 and 7, respectively. That season, the team skated to a pedestrian record of 12-21-1.

Now, with the nation’s leading goal-scorer, junior Ryan Donato, sporting the crimson and white, the goalless homestand is far more striking. This is the first time all season that Donato has been kept off the scoresheet entirely for two straight games.

The frustration began to bubble over, perhaps, in the third frame. Freshman forward Benjamin Solin engaged in some shoving with Point after charging to the front of the Raiders net and knocking the goalie off balance. Later, sophomore Nathan Krusko took a seat for boarding a Colgate player. Coach Donato, though, would not justify “desperate” hits like this one with highflying emotions.

“No one likes to be shut out,” began coach Donato when asked about the boarding penalty. “But in general, I wouldn’t want to qualify any bad hit by saying, ‘The team’s frustrated, that’s okay.’ I don’t like to see those hits in hockey at any time.”

Looking ahead, Harvard will have to resolve its offensive woes while also deciphering its situation between the pipes. While neither Madsen (2 GA, .905 SV%) nor junior Michael Lackey (2 GA, .926 SV%), who started against No. 2/4 Cornell on Friday, had particularly bad showings, the backstop job is still up for grabs.

“We’re going to see if we can get a hot hand, and let the play on the ice decide,” coach Donato said. “[Madsen’s] got a track record and had some success, and [Lackey’s] played well as of late, but I don’t really look too far ahead as to what that’s going to look like.” 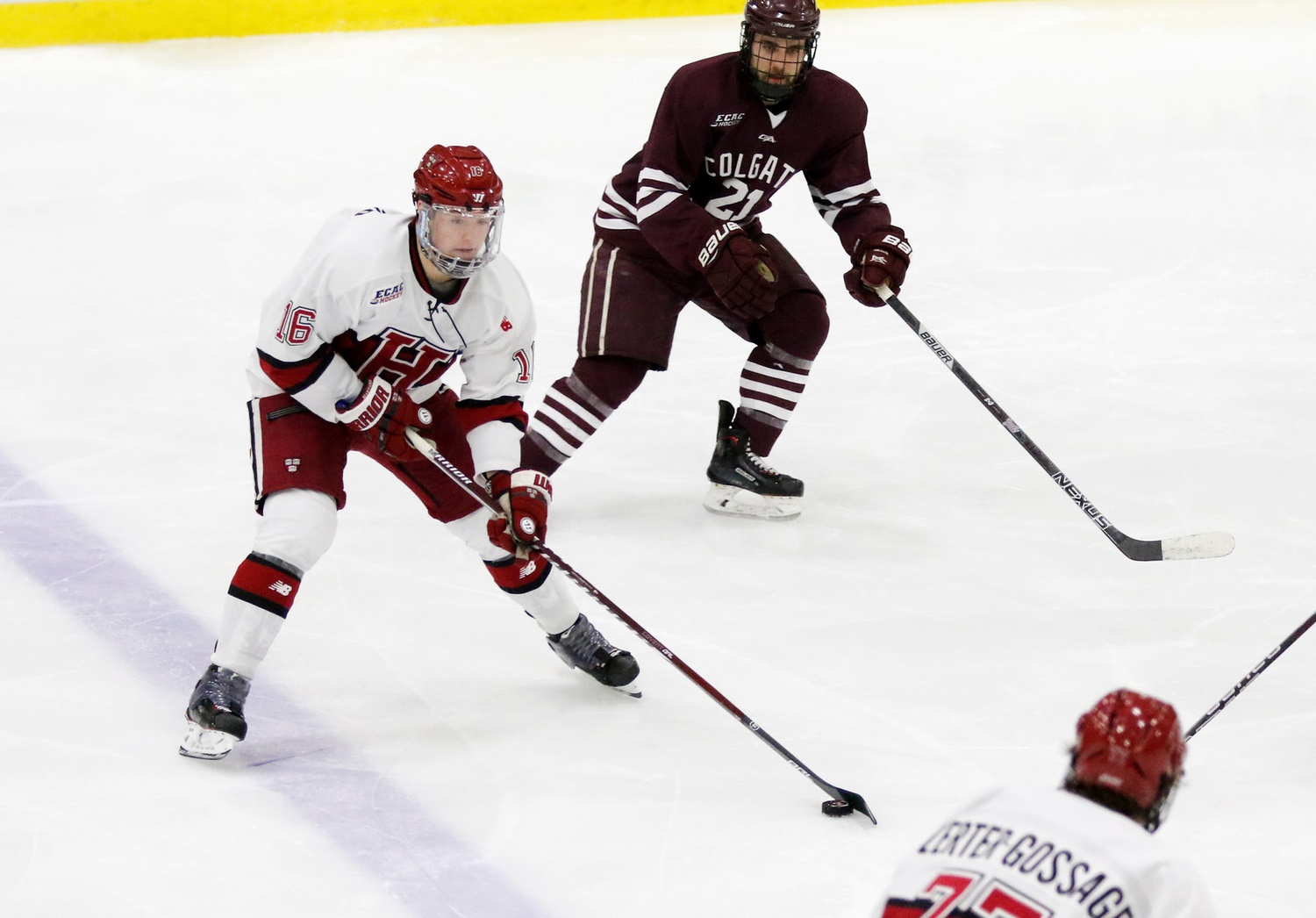 The Crimson, normally steady at Bright-Landry, also suffered its first winless weekend at home since Feb. 2014. With a chance to pick up four crucial conference points—not to mention redeem losses in early November—Harvard finished the weekend with none. The Crimson icemen have now been swept by both Cornell and Colgate in their regular season series.

As the ECAC standings tighten, the Crimson will head up to Dartmouth next weekend in its last game before the Beanpot begins, hoping to find more success there against a hot Big Green team.