Men's Hockey Surges Past .500 Against RPI and Union 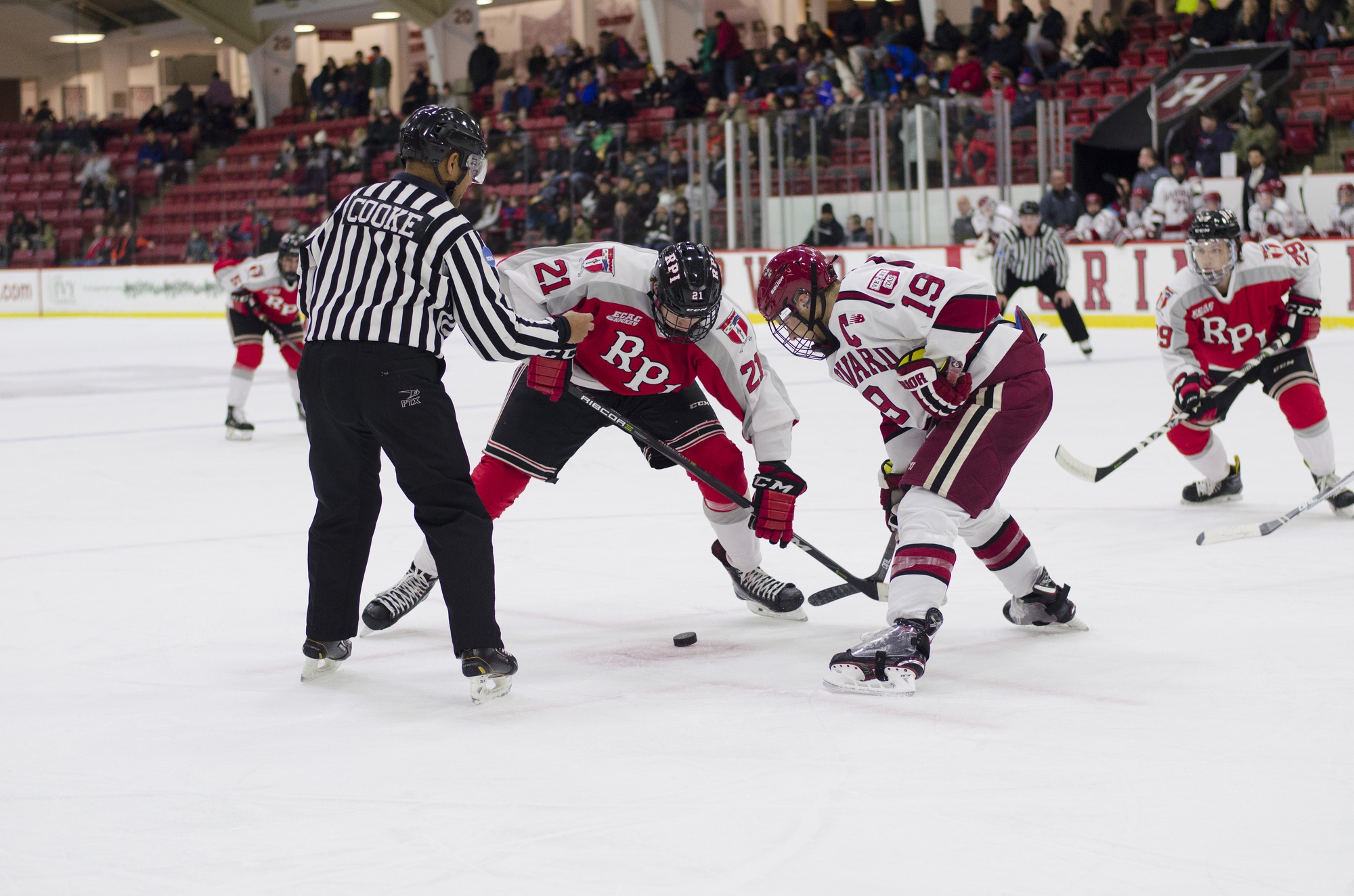 The Crimson nabbed a pair of ECAC wins this weekend and has taken another step in the road back to a top spot in the conference by surpassing .500. By Courtesy of Ben Vreeland
By Stuti R. Telidevara, Crimson Staff Writer

The Harvard men’s hockey team had already lost six games heading into the weekend—the same number of games it lost all season last year. But if there’s one lesson this team has held close, it’s that there’s no use looking back.

In the spirit of the new year, the Harvard men’s hockey team is hoping to steer its season in a new direction. After struggling on the road in 2017, the squad returned home to the Bright-Landry Hockey Center this weekend and reached another checkpoint on its journey back to contending in the ECAC. For the first time since early November, the Crimson sits above .500 thanks to wins over RPI and Union.

“I’m pretty proud of our guys for sticking with it,” said Harvard coach Ted Donato ’91 after Saturday’s win against Union. “We had plenty of chances to hang our head...but it’s nice to see our guys keep their composure.”

The puck was brought outside the Crimson’s defensive zone for a faceoff with 14 seconds to play in overtime. Junior forward Ryan Donato won the puck back to his blueliners, and before the Dutchmen detected the threat, senior defenseman Wiley Sherman stretched three lines to hit the tape of a streaking Henry Bowlby.

The freshman forward skirted a Union defenseman, deked out junior goalie Jake Kupsky, and just like that, backhanded the puck into the net. With just six seconds on the clock, Harvard had nabbed the W.

“We knew there was not much time left, so we had to be careful with the puck,” Bowlby said. “It was definitely a rollercoaster.”

The overtime dramatics provided a fitting capstone for the back-and-forth 60 minutes leading up to the extra frame. The Crimson entered the third period trailing the Dutchmen, 2-1, on goals scored by forwards Ryan Walker and Ryan Scarfo.

The latter was a power play tally—the first that Harvard had conceded in four games and 13 kill attempts. The Crimson’s own goal scorer was Donato, also on the power play, marking the sixth straight game in which he’s found the back of the net.

The third frame saw leads vanish as quickly and easily as they were regained, as Harvard scored twice and Union netted one goal all within a span of 55 seconds.

First, Bowlby, the eventual overtime hero, notched the game at two when he jammed the puck home on a netmouth scramble. Half a minute later, Dutchmen forward Anthony Rinaldi potted a puck that hushed the Bright-Landry crowd before junior forward Michael Floodstrand added his second tally of the season to equalize the game yet again.

The scoring extravaganza, however, must not diminish the efforts of tri-captain goaltender Merrick Madsen, who recorded 35 saves on the night.

“Our goaltender gave us a chance to be only one goal down,” coach Donato said. “[So] we were able to execute things late in the game under pressure.”

The Crimson kicked off the 2018 portion of its schedule the night prior when it played host to the Engineers—Harvard’s first home game in two months.

Nearly a year ago, in the teams’ most recent clash, RPI scored twice on the power play and kept the Crimson off the score sheet. On Friday, Madsen and his Harvard squad returned the favor. 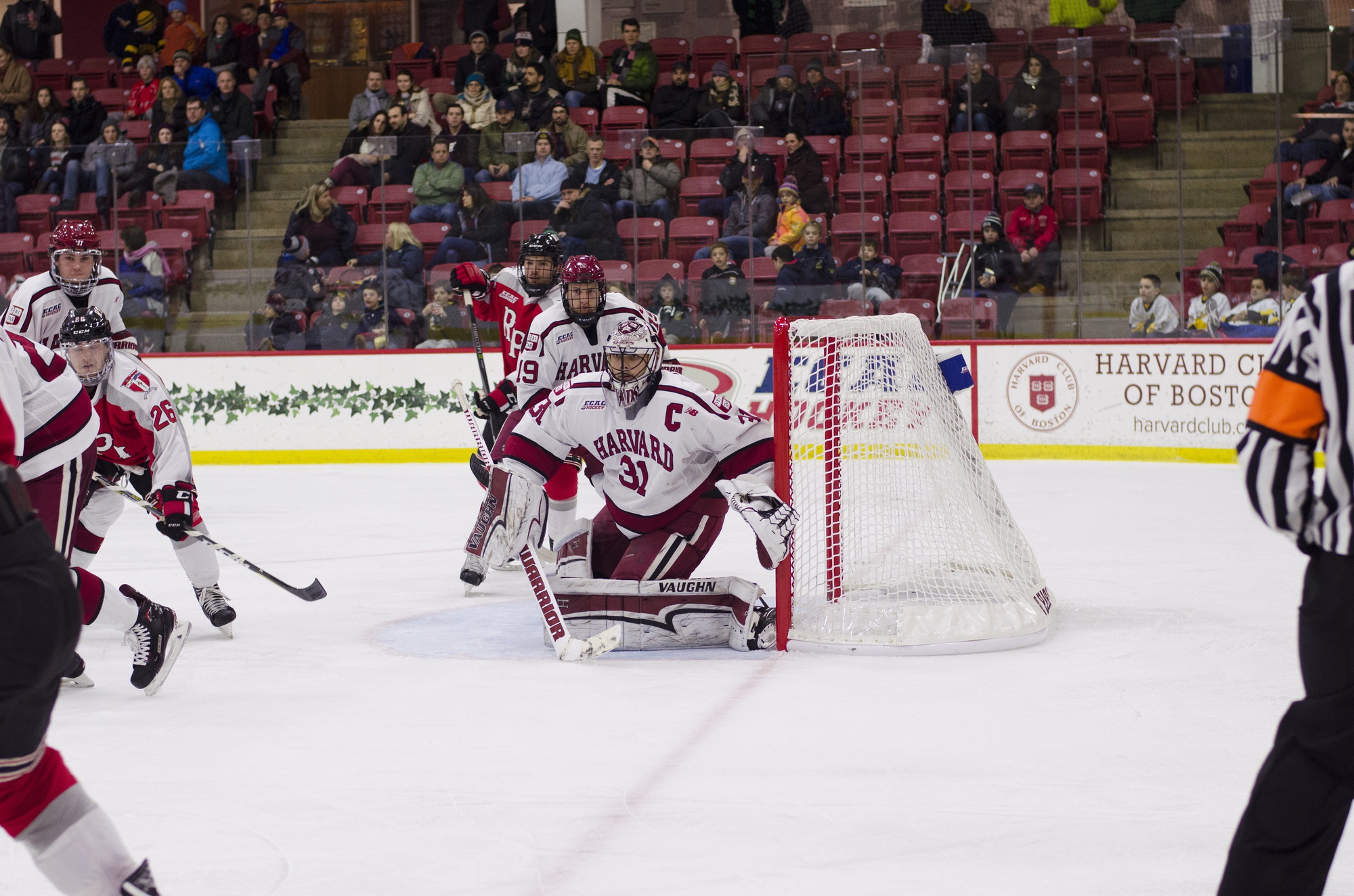 Tri-captain Merrick Madsen put forth a stingy night between the pipes on Friday, holding RPI goal-less and earning his 10th career clean sheet. By Courtesy of Ben Vreeland

In many ways, the numbers not displayed on the scoreboard truly sealed the Engineers’ fate. The Crimson outshot the visitors, 14-7, in the final frame while defending a three-goal lead and went a perfect 2-for-2 on the penalty kill on Friday night.

After a November of losses and a December mostly spent watching back-up Michael Lackey field pucks, Madsen shined in his 10th shutout and 50th win in a Harvard sweater. His 32 saves moved him into sole possession of second on Harvard’s all-time career shutouts list.

“When you’re getting a shutout, you’re definitely giving your team a chance to win,” Madsen said. “It’s a testament to me trying to get back to my game. I just feel really sharp right now.”

The Crimson’s offense wasn’t far behind. Ten minutes into the first period, junior winger Lewis Zerter-Gossage slotted a cross-ice pass to Donato, who beat RPI’s rookie net-minder, Linden Marshall, with a bar-down snipe from the slot. The goal was the junior’s 13th tally in as many games, furthering his season-long point streak.

“It shows how good our coaching is and how good my linemates are, to put me in a position to have the chance to score,” Donato said.

But with Donato’s impending departure for the Winter Olympics next month, Harvard will need its other offensive pieces to step up. Freshman forward Jack Badini will be an integral part of that replacement-by-committee, and he showed promise on Friday night.

The second-line center fed sophomore forward Ty Pelton-Byce in front of the net to set up the Crimson’s second goal of the night. Later, Badini added a tally of his own, picking the pocket of an Engineer defenseman and firing the puck past Marshall early in the middle period.

In addition to the promising play of its forwards this weekend, Harvard can look forward to sophomore blueliner Adam Fox rejoining the lineup when the Crimson head to Troy, N.Y., on Tuesday to battle RPI again.

Fox has missed Harvard’s last four games while representing team USA at the IIHF World Junior Championship in Buffalo, N.Y. On Friday, the Calgary Flames prospect won a bronze medal with his fellow American amateurs and was named one of his nation’s most valuable players during the tournament.

—Staff writer Stuti R. Telidevara can be reached at stuti.telidevara@thecrimson.com.